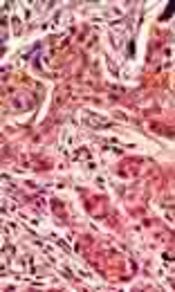 Recombinant human bone morphogenetic protein 2 (rhBMP - 2) regulates several functions within human cells, including invasion, adhesion, differentiation, proliferation, and programmed death. The intercellular role of this protein in cancer progression has been extensively investigated in recent studies. Alterations in β - catenin could also promote cancer progression throughout the Wnt/β - catenin signaling pathway. The present study aimed to evaluate the effect of rhBMP - 2 on the expression and localization of β - catenin in the induced oral squamous cell carcinoma (OSCC) in the buccal pouches of golden Syrian hamsters.

Buccal cavities of 57 hamsters were scrubbed by 5% 7,12 - dimethylbenz[a]anthracene (DMBA) three times per week for 3.5 months. In addition, the animals in the test group (n = 29) were injected with 0.25 µg of rhBMP-on days one, seven, and 49 of the study, and biopsies were extracted afterwards. The expression of β - catenin was immunohistochemically studied in the affected tissues.

Membranous β - catenin expression was observed in 71.1% of the cells in the animals in the test group and 64.8% of the control subjects. However, no significant difference was observed between the study groups (P > 0.05). Moreover, nuclear β - catenin expression was detected in 39.1% and 23.6% of the cells in the test and control groups, respectively with a significant difference in this regard (P < 0.05).

According to the results, rhBMP - 2 increased the nuclear localization of β - catenin in the OSCC and activated the Wnt/β - catenin signaling pathway. However, evidence is scarce on the increased invasiveness due to the loss of β - catenin membranous expression.

Bone morphogenetic proteins (BMPs) are the largest subfamily of the TGFβ protein superfamily, which participate in several developmental processes and signaling pathways within living cells; as such, researchers have recommended changing the name to body morphogenetic proteins (1). This family of proteins control many stages of cellular differentiation in various embryonic cell types in order to generate distinct constituents (2). During embryonic maturation, BMPs play a key role in the induction of apoptosis, which is essential to the elimination of ineffective cells and tissues (3).

Recent studies have revealed that BMPs are also involved in tumor development, exerting antitumorigenic effects on the primary stages and protumorigenic effects on progressive carcinogenesis (4). Although BMPs are considered to be multifunctional proteins, the implantation of osteoinductive proteins, such as BMP - 2, in the bones or other tissues results in bone formation. BMP - 2 particles are dissolvable and act locally to bind to the definite receptors on the cell membrane. These receptors transfer signals through specific molecules known as small mothers against decapentaplegic (SMADs), which are able to stimulate specific genes (5).

BMP receptors (BMPRs) are located on the cell membranes containing serine\threonine kinase receptors, which are comprised of an extracellular short division consisting of 10 - 12 cysteine tails, a transmembrane division, and a serine - threonine kinase division within the cell.

Researchers have defined five categories of type I BMPRs and three categories of type II BMPRs (6). Accordingly, several studies have indicated the sequence of BMP - 2 signaling, including the SMAD signals from the clathrin - coated pits and SMAD pathways starting within detergent - resistant membranes, which contain caveolae and are responsible for the regulation of SMAD signaling (7). However, the process remains unclear due to the contradictory reports and lack of studies in this regard.

The current pattern of BMP - 2 signals mainly involves the controlling of SMADs (1,4,5), which are combined with a phosphoryl group on the cell membrane and move toward the cell nuclei to induce reactions in specific genes, which in turn leads to the direct or indirect induction of the Wnt3 signaling pathway. It is possible that the Wnt3 signals suppress the GSK3 compound, which is responsible for producing β - catenin in a state of stability. In this process, β - catenin moves into the cell nuclei and cooperates with LEF1 - TCF in order to induce several critical processes in cells and tissues, such as reproduction, mobility, and metaplasia (8-10).

Two systems are involved in the process mentioned inFigure 1, including the binding of 1 - TCF to the Groucho receptors to enhance the deacetylating of the histones and chromatin compression and suppress the expression of the targeted genes, and Wnt - induced β - catenin stability in the cell plasma to enable the transfer of β - catenin to the cell nuclei for TCF binding. With the assistance of other mediators, this process loosens the chromatin and enables genomic expression (12). One hamster in the test group (BMP - 2) and two animals in the control group did not survive to the end of the experiment. In this study, 5% 7,12 - dimethylbenz[a]anthracene (DMBA) dissolvable in paraffin wax (Sigma Aldrich Chemical Pvt. Ltd) and rhBMP - 2 (0.25 µg/ml) soluble in physiological serum were purchased from Cowellmedi Co. Ltd, Korea.

Carcinogenesis was stimulated in the buccal pouches of 75 golden Syrian hamsters by the applying 0.5% DMBA in the liquid wax of topical paraffin and repeated three times per week for 3.5 months. The animals in the test group (n = 29) were administered with rhBMP - 2 (0.25 µg/ml) through injection into the submucosal tissue of the buccal pouch on days one, seven, and 49. Afterwards, they were sacrificed, and tissue samples were extracted and preserved in 10% buffered formalin. Buccal Pouch of Animals After 14 Days of DMBA Application

The mucosal tissues of buccal pouches were examined histopathologically in the test and control groups. Following that, the biopsies were fixed in 10% buffered formaldehyde, processed, and embedded in paraffin wax. Two serial cross - sections (thickness: 4 μm) were placed on silanized slides for deparaffinization and rehydration with dimethylbenzene and three descending grades of alcohol.

Antigen retrieval was performed under pressure in an over for five minutes. The samples were incubated after covering with 3% hydrogen peroxide for 15 minutes in order to prevent endogenous peroxidase activity. Additionally, the primary anti - β - catenin monoclonal antibody (DAKO Cytomation, USA, clone β - catenin - 1) was added to the slides (n = 57), which were covered again for four hours at the temperature of 27°C using a dilution (6 µg/ml) in accordance with the instructions of the manufacturer.

After additional incubation with the secondary antibody (45 minutes) and streptavidin peroxidase (30 minutes), visualization was carried out for 10 minutes using a freshly arranged diaminobenzidine (DAB) chromogen. Finally, the specimens were stained in Harris hematoxylin solution and microscopically examined in order to investigate the staining patterns and β - catenin expression in each group.

The most invading tumor islands were further evaluated, and the total number of the squamous cells within these fields were determined and investigated for the localization of β - catenin. The epithelial cell showing normal, intact membranous staining and the cells with cytoplasmic, nuclear or incomplete membranous expression were considered as irregular cells for β - catenin. BMPs play a key role in tissue growth, organizing multiple processes during the formation of the skeleton, hematopoiesis, formation of the nerve tissues, and determining the differentiation plan in embryonic cells. These proteins were discovered in the 1960's and have been extensively studied over the past 60 years. Nevertheless, further investigation is required to reveal the other aspects of their functions (13).

BMP signals initiate with their binding to specific type I and II receptors. The genetic control is mediated by various pathways, which may involve SMAD - independent and SMAD - dependent signals. The current study has focused on the association of BMP - 2 and one of the most critical agents in the Wnt signaling pathway, known as the β - catenin protein.

β - catenin is responsible for organizing the harmony of cell - cell adhesion and gene transcription; therefore, so it has a dual function within the cells. In humans, β - catenin is coded by theCTNNB1gene. The shift between these functions is organized by several factors, including molecular structure and stabilization and the presence of epithelial - cadherin-mediated cell - cell bonding (14).

In the present study, no statistical difference was observed in the expression of β - catenin after the injection of rhBMP - 2 (0.25 µg/ml) into the submucosal tissue of the buccal pouch in golden Syrian hamsters with induced squamous cell carcinoma. However, nuclear localization had a significant difference between the study groups, andtwas more significant in the BMP - 2 group compared to the control group. This finding indicated the interaction between BMP - 2 and Wnt signaling pathway, where β - catenin may differ based on its cellular localization.

As β - catenin translocates into the cell nuclei, it produces specific compounds with the TCF/LEF transcriptional factor. The connection enhances the expression of many targeted genes and activates the Wnt signaling pathway (15). As a result, rhBMP - 2 leads to cell multiplication, dislocation, invasion, and epithelial - mesenchymal transition through the nuclear translocation of β - catenin (8). Interestingly, β - catenin expression in the nuclei is often associated with the lEAST favorable results in the patients undergoing postoperative chemotherapy or radiotherapy.

In the current research, the results of multivariate analysis indicated that β - catenin expression in the nuclei is an independent prognostic indicator in cervical squamous cell carcinoma (16). Furthermore, several studies have confirmed the association between the nuclear localization of β - catenin and the high - grade serous carcinomas of the ovaries (17). It has also been reported that the abnormal expression of β - catenin is an essential predictor of histological differentiation in the patients with oral squamous cell carcinoma (OSCC) and is associated with poorly differentiated OSCC (14). Therefore, disorganization of β - catenin may contribute to the pathogenesis of many types of carcinogenesis.

In conclusion, the results of the present study indicated that rhBMP - 2 increases the nuclear localization of β - catenin in OSCC and activates Wnt/β - catenin signaling pathway. However, evidence is scarce regarding the role of rhBMP - 2 in increasing invasiveness due to the loss of β - catenin membranous expression. Our findings could be beneficial in recognizing the signaling and mechanism of action of BMPs, allowing clinical applications in the future. It is hoped that all the influential factors and molecules and signaling pathways of these proteins will be established clearly in further investigations.