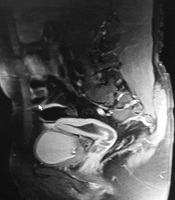 Persistent Mullerian duct syndrome (PMDS) is a scarce type of male pseudohermaphroditism due to anti-Mullerian hormone dysfunction. So, Mullerian duct derivatives such as the uterus, cervix, fallopian tubes, and two-thirds of the vagina are seen in a normal phenotypic and genotypic male. Considering and assessing the clinical manifestations, associated diseases, histopathology, and imaging findings can be clues in the management of such cases.

Here, we describe a case of PMDS with left inguinal hernia and bilateral cryptorchidism and discuss the management and review of the literature. Also, the case has a history of brain mass with a pathologic diagnosis of ganglioneuroma. Is there a correlation between PMDS and extragenital neoplasm? it needs more investigation in the future.

Bilateral cryptorchidism could provide us with a hint toward PMDS diagnosis. However, genetic counseling will be required, particularly in parental consanguinity.

One of the rare internal male pseudohermaphroditism described for the first time by Nilson in 1939 is persistent Mullerian duct syndrome (PMDS) (1). Male sex differentiation appears by testosterone (secreted by fetal Leydig cells) and anti-Mullerian hormone (AMH) (secreted by fetal Sertoli cells). Testosterone is responsible for the existence of Wolffian ducts and the development of male external genitalia. The AMH function is the regression of fetal Mullerian ducts. The PMDS is a disorder of sex development because of the absence of AMH or anti-Mullerian hormone receptor (AMHR) dysfunction while testosterone is normally acting. Thus, Mullerian ducts remain accompanied by testes and male excretory ducts. According to infertility and the risk of malignancy in testis and Mullerian duct remnants, the identification and treatment of these patients are important (2).

The clinical presentations of patients with PMDS are divided into 3 main categories:

The first and most common presentation is bilateral cryptorchidism. The testes are found in the normal position of ovaries. The second one is the unilateral cryptorchidism. One testis is located in an inguinal hernia along with the parts of Mullerian duct derivatives. This form of the disease is known as hernia uteri inguinal. The third presentation is transverse testicular ectopia. Both testes along with Mullerian duct derivatives herniated into one processus vaginalis. This presentation is suggestive of PMDS but is less common (3-5). During the evaluation, as well as the surgery of these patients with undescended testes or with inguinal hernia, Mullerian structures such as the uterus and fallopian tubes are unexpectedly found (1).

About 240 cases of this scarce condition have been described so far (4), but it seems that this estimation is under the true value because, in the past, the surgical approach to the undescended testis was not always done. So, the remnants of Mullerian derivatives might have been missed (6).

The aim of this case report is to consider information about tissue histopathology and to image findings and associated diseases, which can be clues in the management of such cases.

The case was a previously healthy 27-year-old Iranian male presented with painful swelling of the left inguinal area. He was referred to Shohada Tajrish Hospital, Shahid Beheshti University of Medical Sciences in 2013. Informed consent was taken from the patient. He was single and his parents were not related. None of his siblings revealed ambiguous genitalia or early infant death. The patient had a history of brain mass with the pathologic diagnosis of ganglioglioma 4 years earlier.

In physical examination, left inguinal hernia was seen. Bilateral undescended testes, which were not palpable in the inguinal canal, were detected. External genitalia had a normal male appearance. Also, phallus and urethra were normal. A palpable firm mass in the suprapubic region was found.

An abdominal ultrasound scan did not identify either the female internal genitalia or the testes. In ultrasound evaluation, both right and left undescended pelvic gonads were reported. Also, a lobulated pelvic mass with heterogeneous echogenicity and central necrosis was seen. Contrast-enhanced T1 sagittal image demonstrates a rudimentary uterus within the pelvis. Fluid is accumulated in the endometrial cavity indicative of hematometrocolpos.

At first, the patient underwent diagnostic laparoscopic surgery and a blunt-end uterus, bilateral fallopian tubes, and both testes were discovered. Then, due to the lack of adequate visualization, it was converted to an open approach (Pfannenstiel incision, which provided superior exposure allowing the safest possible approach to the Mullerian structures and blood supply). Also, bilateral orchiopexy, complete hysterectomy, and bilateral gonadal biopsies were done. Because of the shortness of spermatic cords, the testes were fixed in bilateral inguinal canals. Consequently, the bed of the canals and overlying skin were repaired by surgical strings.

The specimens received in the pathology lab were in 3 containers. The first one contained uterus in formalin with a deformed appearance m: 7 × 3.5 × 1.5 cm. On opening, two attached canals were seen; one measured 3 cm in length and 0.9 cm in diameter and the other measured 3 cm in length and 1.3 cm in diameter. The uterine cavity was small measuring 4 × 3.5 × 1.5 cm. Endometrial and myometrial thicknesses were 0.1 cm and 0.5 cm, respectively. No mass lesion or other pathologic findings were seen (Figure 2). The second and third ones contained testicular tissue biopsies in Bouin fixative.

Gross pathological findings of operative specimen from patient. A, the uterus without adnexa; B, cross-section of uterus with two attached canals. PMDS is a rare form of male pseudohermaphroditism, in which someone who karyotypically (46, XY) and phenotypically is male has testis and derivative structures of both Mullerian and Wolffian ducts (5).

Although PMDS is rare, it warrants careful attention because of malignant degeneration and infertility (8).

Infertility is a very common complication in PMDS, but normal spermatogenesis has also been reported. Fertility is rare and it occurs if at least one testis is located in the normal place and excretory ducts should be intact (3, 5, 8). Our patient had azoospermia in spermogram, as well as germ cell aplasia in testes biopsies.

Out of 39 cases of PMDS-associated tumors reported in the literature, 37 were in association with a variety of testicular tumors (9). In fact in PMDS, the most reported malignancy is the neoplasm of testes. The most common malignancy appeared with PMDS is seminomatous germ cell tumor. Non-seminomatous germ cell tumors and one case of mixed choriocarcinoma with teratoma were also reported (5). Up to now, 20 cases of PMDS with testicular malignancy have been reported. The overall incidence of malignant transformation of abdominal testes (5% - 18%) is similar to healthy males with undescended testes (5, 10). Mullerian malignancies are much less frequent than testicular cancer (3). Farikullah et al. (11) have reported the Mullerian derivative malignant transformation rate between 3.1% and 8.4% of PMDS in a case series. A case of clear cell adenocarcinoma in a 67-year-old man (12), a case of uterine adenosarcoma in a 14-year-old boy (13), and a case of endocervical adenocarcinoma in a 39-year-old man (9) are some examples. To decrease the risk of malignancy, orchidopexy and excisional surgery for Mullerian derivatives are performed (10).

Interestingly, our case had a history of a brain tumor with a pathologic diagnosis of ganglioneuroma. It needs more investigation to show if there is a relation between PMDS and extragonadal and extragenital malignancies.

Some congenital abnormalities such as Hirschsprung disease, renal anomalies (horseshoe kidney, polycystosis), and intestinal complications (atresia and lymphangiectasia) in association with PMDS have been reported. AMH gene and AMHR2 gene mutations are rare in the PMDS patients with the above association (3).

PMDS is different from mixed gonadal dysgenesis, which is a disorder of sex disease due to the dysfunction of both Leydig and Sertoli cells. The latter manifests external genital ambiguity, which is not seen in patients with PMDS (3-6). Inguinal hernia of different sac contents (intestinal loops, urinary bladder, and appendix) and traumatic or iatrogenic urinary bladder herniation into the scrotum are radiologic differential diagnoses of PMDS (10).

The main goal of PMDS treatment is the management of undescended testes and Mullerian duct derivatives, the prevention of Mullerian remnants malignancy, and the protection of fertility (14). The treatment of patients with PMDS is surgical. Locating ectopic testes to normal position in PMDS is difficult due to spermatic cord shortening and abnormal position of vasa deferentia. There are some controversies about Mullerian duct derivatives. Some authors agree with the resection of residual of Mullerian derivatives due to probably malignant transformation, urinary tract infection, periodic hematuria, and other urination problems. The others emphasize retaining them to protect the blood supply of testes and vas deferens (7, 14).

To sum up, bilateral cryptorchidism is a call for the possibility of PMDS. If PMDS is diagnosed, genetic counseling will be needed especially in parental consanguinity.