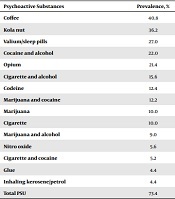 Globally, psychoactive substance use (PSU) and sexual harassment of female undergraduates are strongly linked and regarded as major public health concerns. However, research efforts on these problems are yet to be given adequate attention in Nigeria.

This study examined the patterns and predictive influence of PSU on exposure to sexual harassment and the self-esteem of female undergraduates.

Our findings revealed the need to urgently curtail sexual harassment of students, considering the threats it poses to the Nigerian academic clime and its staggering cost to the current and future states of the Nigerian society at large.

Illicit and prescription drugs use among adolescents is a significant health problem globally. The United Nations Office on Drugs and Crime (UNODC) reports that in 2010 approximately 5 percent of the world’s population, mostly young people, used at least one illicit drug. It is estimated that alcohol use results in 2.5 million deaths per year, while heroin, cocaine, and other drugs are responsible for 0.1 to 0.2 million deaths per year (1).

In related research carried out in the USA by the Substance Abuse and Mental Health Services Administration (SAMHSA), an increase in the use of illicit drugs among Americans aged 12 years and above was reported (7). Also, the study revealed that most people developed drug use habits as teenagers and that illicit drug use was highest among late teens and people in their twenties. Worldwide, there were over 2.8 million new users of illicit drugs in 2013, approximately, about 7,800 new users per day. Over half (54.1 percent) were under 18 years of age (8). In the same vein, NIDA (8) reported that more than half of new illicit drug users worldwide begin with marijuana, while other common illicit drugs used worldwide (mostly by younger teens) are prescription pain relievers, inhalants, and alcohol (8).

1.1. Sexual Harassment in Schools and Homes

Sexual harassment is a significant problem among students, and the rates are three times higher for females in universities compared to similar ages in the general population (9, 10). For many young women, the most common place where sexual harassment is experienced is in school (11, 12). In an extreme case of violence in 1990, 71 teenage girls were raped by their classmates, and 19 others were killed at a boarding school in Meru, Kenya (13). Moreover, 23% of girls in Canada had experienced sexual harassment while attending school (14).

Earlier researches carried out in some African countries highlighted the role of teachers in facilitating or perpetrating sexual coercion (15-19). A report by Africa Rights found cases of school teachers attempting to solicit sex from students in return for good grades in the Democratic Republic of the Congo, Ghana, Nigeria, Somalia, South Africa, Sudan, Zambia, and Zimbabwe (15). In South Africa, school teachers were responsible for 32% of disclosed child rapes among students less than 15 years (20). Similarly, cases of sexual harassment were also reported in Malawi (21), Uganda (18), and the USA (22).

Consequently, some authors have highlighted factors such as family structures-where a child is not living with both biological parents (23-25), living with single-parent (26), re-constituted families (27), single parents or stepfamilies (28), and girls living with stepfathers as common risk factors for child sexual harassment (29).

A strong connection between drug use and risky sexual practices is observed in the literature (30, 31). Studies reported that PSU enhances sex drive, lowers inhibitions, delays orgasm, and improves sexual performance (30-32). Under the influence of psychoactive substances, individuals are less likely to have protected sex and more likely to have sexual intercourse with strangers and with multiple sex partners (32-34).

Also, the study examined the extent to which substance usage significantly predicts self-esteem and exposure to sexual harassment among participants.

1) What are the patterns and nature of PSU and sexual harassment among female undergraduates?

2) Are age and PSU significantly associated with exposure to sexual harassment?

4) Does PSU significantly predict self-esteem among the participants?

1) Age will significantly correlate with sexual harassment of female undergraduates.

2) PSU will significantly correlate with sexual harassment of female undergraduates.

A cross-sectional survey design was employed in this study. The population comprised of female students of a Federal Polytechnic in Nigeria. The stratified sampling procedure was used to select 500 female students of four randomly selected departments who participated in the study.

Criteria for inclusion in the study were being a registered undergraduate who, at the time of data collection, was on full-time study within the Polytechnic Campus. This criterion controlled for the possible error in the responses of students who are not undergraduates or who were not on a full-time study basis but might be around the campus at the time of instrument administration. The study also included students who were willing to participate and ready to answer and return the questionnaires to the researchers. This inclusion criterion enabled the researcher to ensure that all the prospective participants are well enlightened and understood the purpose of the study, as such motivation and accurate response is guaranteed.

A set of three instruments was used for data collection. Sexual Experience survey (SES) by Koss and Gidycz (35) is used to examine the experiences of sexual harassment, usually among females. The scale consists of 10 items with four measurement categories, which include rape, attempted rape, sexual coercion, and sexual contact. The response format is in yes or no. the scale has an internal reliability coefficient of r = 0.74 for the women population and r = 0.89 for the men population.

Substance Abuse Prevalence inventory (SAPI) by Omoluabi (36) was another instrument used in this study. The scale was developed to measure the frequency of use and abuse of different drugs within 30 days. It also measures the number of drugs used with a 30-day period. The scale has a test re-test reliability of r = 0.51 and P = 0.001.

Rosenberg's self-esteem scale (37), is a 10-item scale that measures global self-worth by measuring both positive and negative feelings about the self. The scale is believed to be uni-dimensional. All items are answered using a 4-point Likert scale format ranging from strongly agree to strongly disagree. RSES has a Guttmann coefficient of 0.92 and had been validated on Nigerian adolescents (38).

Data collected was analyzed with the use of Statistical Package for Social Sciences (SPSS 23). Descriptive statistics (frequency count and percentages) were used to organize, summarize, and describe the demographic characteristics of respondents; inferential statistics (Pearson’s correlation) were used to test the hypotheses of the study.

The prevalence of sexual harassment reported by the participants was 64.2%, while 39.2% of them claimed they were victimized through sexual contact (Table 1). Also, as shown in the same table, 8.6% of victimized respondents have experienced attempted rape, while 9.0% reported that they were victims of sexual coercion. Finally, 7.4% of victimized female students claimed to have been raped. Based on this analysis, the most common form of sexual harassment among female students is sexual contact.

Table 1. Prevalence and Forms of Sexual Harassment Among Female Students

Table 2 shows the prevalence of sexual harassment perpetrators. While it has been observed that 47 (9.4%) had been sexually victimized by lecturers, 17.4% claimed they had experienced sexual harassment from their school mate. Furthermore, 36.0% reported having been victimized by their boyfriend. Also, 8.4% of victimized students have experienced harassment from their sibling or close relatives, and 1.8% reported they have been sexually harassed by the church or mosque members.

Table 3. Nature and Prevalence of Psychoactive Substances Use Among Participants

bCorrelation is significant at the 0.05 level (2-tailed).

cCorrelation is significant at the 0.01 level (2-tailed).

The research question was analyzed and tested with a multiple regression at 0.05% level of significance; the analysis of the result summarized in Table 5 suggests that marijuana, cocaine, codeine, coffee, glue, nitro oxide, opium, and valium jointly and significantly predict exposure to sexual harassment among the sample. It is observed that PSU explains a 6.5% variance in exposure to sexual harassment. Further results show that valium (β =.148, t = 3.28), opium (β = 0.099; t = 0.041), and coffee (β = 0.121, t = 2.70), had significant independent beta contributions in predicting sexual harassment among the female students.

The question was analyzed and tested with a multiple regression at 0.05% level of significance. The analysis of the result presented in Table 6 suggests that marijuana, cocaine, codeine, coffee, glue, nitro oxide, opium, and valium do not jointly or individually predict self-esteem among the sample. It is observed that PSU explains a 2.8% variation of self-esteem.

The findings show that there is a significant influence of PSU on exposure to sexual harassment of female students. This finding supports the works of UNODC (1), Khadr et al. (31), and Desai et al. (40) which reveal that individual female drug users were more likely to be vulnerable to sexual harassment than counterparts who are not drug and alcohol user. Consequently, this study also supports the literature showing that the use of psychoactive substances is a strong determinant of exposure to sexual assaults such as rape (40-45). Substance use has been described to predispose university students to physical and sexual harassment (46).

The findings of this study demonstrate a significant problem of psychoactive substance use and sexual harassment among Nigerian female undergraduates and thus recommend urgent intervention. Considering this, tertiary institutions must strive to develop and uphold well-suited sexual harassment policies bearing consequences for defaulters. Such policies should be effectively and consistently communicated to staff and students alike using written documents, meetings, billboards, and other mass media.

Also, health policies within tertiary institutions should include drug control policies and programs targeted towards drug education and counseling. Organized drug control programs should also equip female undergraduates with alternative healthy coping skills such as assertiveness, resilience, and problem-solving to help them identify manage stressors that are typical with higher education, thereby inhibiting psychoactive substance use. Besides, further research efforts to create awareness on theses social skills should be explored.