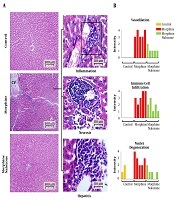 Co-Administration of Morphine and Naloxone: Histopathological and Biochemical Changes in the Rat Liver

Co-administration of opioid agonists and antagonists at low doses has been reported to significantly enhance and/or prolong the analgesic effects and reduce or prevent tolerance to or dependence on opioids.

The current study aimed at evaluating the naloxone effect on morphine-induced histopathological and hematologic changes in rats.

The findings suggest that apart from unchanged serum markers, morphine can potentially induce hepatotoxicity, and at the same time, naloxone is able to ameliorate morphine-induced histopathological damages.

Opioids are widely used as potentially effective narcotic analgesics for pain management. The liver is the main organ for morphine biotransformation and/or metabolism (1). Morphine is rapidly metabolized in the liver and leads to direct and/or indirect cytotoxicity, immunoreactivity, oxidative stress, and oncogenic alterations (2). A high dose of morphine (45 - 50 mg/kg) could potentially increase the alanine aminotransferase (ALT) and aspartate aminotransferase (AST) content in the plasma 4 - 5 h post-administration (3).

In line with earlier research, most recent studies on animal models have shown that morphine at different concentrations can significantly affect the plasma levels of inflammatory biomarkers, such as ALT, alkaline phosphatase (ALP), and AST (4-7). For instance, morphine can potentially induce hepatotoxic derangement when administrated at weekly increasing doses. In another study by Samarghandian et al. (4), morphine, under the aforementioned conditions, could relatively up-regulate the serum levels of ALT and AST in rats.

Morphine triggers the formation of reactive oxygen species (ROS) and free radicals and results in oxidative stress in the liver (8-10). Morphine also increases the apoptosis of hepatocytes through inducing severe oxidative stress (11). In addition, chronic administration of morphine changes the serum levels of triglyceride (TG), cholesterol, urea, and glucose under normal and inflammatory conditions (12). However, concurrent use of opioid agonists with opioid antagonists (at low doses) has been reported to significantly increase the analgesic efficacy and perhaps reduce or thwart tolerance and dependence. Similarly, naloxone at low doses can potentially bind to opioid receptors (13-15).

According to a previous study, the prevalence of nausea during postoperative treatment reduced in groups receiving an admixture of morphine and naloxone (16).

The present study aimed at characterizing the effects of naloxone on morphine-mediated cytotoxicity. For this purpose, the serum levels of AST, ALP, and ALT were measured to identify the effects of naloxone on morphine-induced hepatic inflammation. Moreover, by measuring the oxidative stress markers of serum, including catalase (CAT), superoxide dismutase (SOD), malondialdehyde (MDA), and glutathione peroxidase (GPx), the protective effects of naloxone on oxidative stress were examined following morphine administration. Finally, hematologic factors, including serum low-density lipoprotein (LDL), TG, and cholesterol, as well as liver histopathological changes, were studied to determine whether naloxone can inhibit morphine-induced histopathological and hematologic changes.

Male Wistar rats (230 g - 260 g) were accommodated in standard cages with suitable ventilation and temperature in a 12:12 h dark-light cycle. With free access to standard diet and water, they were accustomed to the laboratory conditions for two weeks. All animals were handled humanely based on ethical guidelines, protocols, and procedures of animal experimentation. The local committee for safety and careful handling of animals also approved the protocol (approval code: IR.UMSU.Rec.1395.211).

3.4. Collection of Blood and Tissue Samples

Following euthanasia, blood samples from the heart were immediately collected. Next, serum samples were prepared by centrifugation for 15 min at 3500 rpm and stored at -20°C. Moreover, a midline incision was made, and liver samples were dissected under controlled conditions. Finally, they were fixed in formalin 10% for 72 h.

The serum MDA level was assessed based on the thiobarbituric acid reaction (CAS 504-17-6, Merck, Germany) (20), and serum levels of SOD and GPx were evaluated according to the kit protocols.

The serum levels of ALT, AST, HDL, ALP, cholesterol, and TG were evaluated based on Pars Azmoon commercial kits’ instructions.

Previously fixed tissues were dehydrated with ascending degrees of alcohol and paraffin-embedded. Next, histological sections (5 µm) were cut using a rotary microtome (model: 2218 HistoRange, Sweden), and hematoxylin and eosin staining was carried out. The periodic acid-Schiff (PAS) staining method was also used to analyze changes in the intra-cytoplasmic carbohydrate storage (21). Moreover, Masson’s trichrome staining, a specific staining method for collagens, was conducted to investigate possible liver fibrosis (22). Finally, the sections were analyzed under a light microscope (Olympus, BH2, Japan) equipped with an onboard camera (Cyber-Shot, Zeiss, Japan).

Values are presented as mean ± SEM. GraphPad Prism version 7.0 was used for one-way ANOVA and Tukey’s test for inter-group comparisons. The level of significance was set at 0.05.

4.1. Effect of Naloxone on Morphine-Induced Changes in HDL, TG and Cholesterol Levels

The effects of morphine-sole and morphine + naloxone treatments on the serum levels of hepatic enzymes were assessed biochemically (Figure 2). No significant difference was observed in the serum AST, ALT, or ALP levels between the morphine-sole and control groups (P > 0.05). However, the serum levels of these parameters significantly improved when morphine was co-administrated with naloxone (morphine + naloxone group).

4.3. Effect of Naloxone on Antioxidant Markers 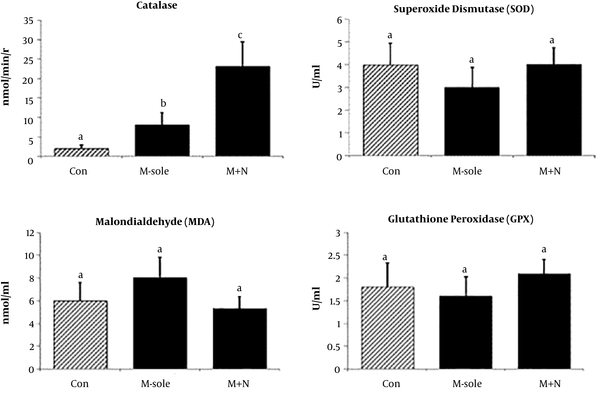 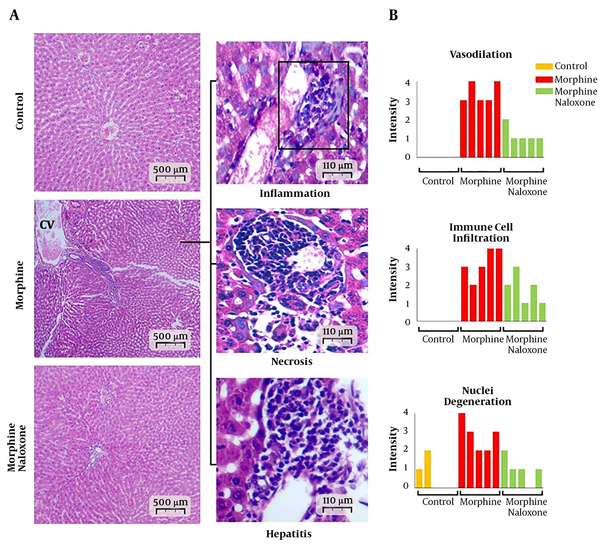 Cross-sections of the liver tissue; A, Normal hepatocytes, sinusoids, and central vein in the control group. The photomicrographs prepared by hematoxylin and eosin staining of the morphine-sole group represent severe inflammation, necrosis, and hepatitis. The morphine + naloxone group presented ameliorated condition with normal sinusoids, central vein, and hepatocytes; B, histopathological pattern for central vein dilation (vasodilation), immune cell infiltration and degeneration of hepatocytes nuclei in five cross-sections from each group. No vasodilation and immune cell infiltration were found in the control group.

4.5. Effect of Naloxone on Morphine-Induced Fibrosis

For examining the effects of morphine-sole and naloxone treatment on the intrahepatocellular carbohydrate deposition, the PAS staining technique was used, and the PAS+ reaction was estimated based on software analyses. Our observations demonstrated significantly lower intracellular carbohydrate accumulation in the morphine-sole group than the controls. However, co-administration of naloxone (morphine + naloxone) remarkably amplified the morphine-induced carbohydrate withdrawal (Figure 5A and B). In order to minimize visual errors, pixel-based intensity analysis was conducted. Animals in the morphine-sole group showed significantly lower PAS+ reaction intensity compared with the control and morphine + naloxone groups. 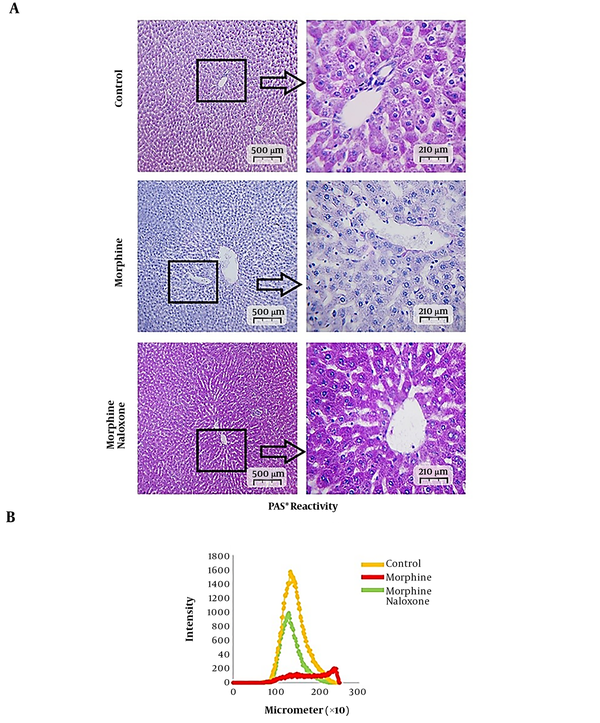 Our findings demonstrated that naloxone + morphine co-administration significantly decreased the morphine-mediated increase in HDL content. However, no significant changes were found in the serum cholesterol and TG levels in the groups. Also, the serum ALT, AST, and ALP levels increased in the morphine + naloxone group. Naloxone significantly up-regulated the serum CAT level, while the serum levels of MDA, SOD, and GPx did not significantly change in the morphine-sole and morphine + naloxone groups. Finally, morphine administration resulted in immune cell infiltration, nuclei degeneration, vasodilation, necrosis, and fibrosis in liver tissues. Although naloxone had no effects on serum parameters, it could fairly inhibit morphine-induced histopathological damages (23, 24).

Morphine can temporarily diminish blood pressure while up-regulating the level of blood glucose and most blood lipids in a time-dependent manner. Moreover, the long-term use of morphine negatively affects these parameters and initiates and/or promotes aggravated diabetes, dyslipidemia, and hypertension (25, 26). It should be noted that morphine indirectly reduces stomach-intestine movement and affects the homeostasis of cholesterol and HDL through this mechanism leading to fatty liver and corticosterone secretion (12).

In this study, we evaluated hematological factors, including serum lipid profile. The morphine-treated animals showed significantly up-regulated serum levels of HDL, while the serum cholesterol and TG did not change significantly compared with the controls. In contrast, the morphine + naloxone group showed a significant decrease in the serum HDL level, with no change in other parameters. Therefore, we can suggest that 0.4 mg/kg/day of naloxone, when co-administrated with morphine (5 mg/kg/day), can converse the morphine-induced effects on the serum HDL level. In other words, morphine (at least at the administrated dose) does not affect the serum cholesterol and TG levels, while it can up-regulate the serum HDL level, possibly due to disruption in HDL hemostasis.

On the other hand, based on our findings, we can suggest that naloxone (even at the mentioned dose) could down-regulate the morphine-induced increase in HDL, possibly due to the amelioration of HDL homeostasis. Earlier studies have shown that morphine increases the serum cholesterol level in animals with inflammatory conditions compared with normal and healthy animals (12). Concerning cholesterol and TG levels, since animals in this study were physiologically intact and no experimental inflammation was considered, morphine and naloxone did not affect the serum TG or cholesterol.

According to several reports, acute and chronic morphine exposures may result in oxidative stress by down-regulating the activities of SOD, CAT, and GPx (30, 31). For evaluating the possible effects of naloxone and morphine co-treatment on the serum levels of antioxidant enzymes, we evaluated the levels of GPx, SOD, and CAT. According to the results, neither morphine nor naloxone could affect GPx or SOD. However, naloxone in the morphine + naloxone group could significantly up-regulate the serum CAT levels.

Additionally, the serum level of MDA was evaluated in the current study. Our findings indicated a higher MDA content in the morphine-sole group in comparison with the morphine + naloxone group. Although these differences were not statistically significant, morphine could potentially up-regulate lipid peroxidation, and an increase in dose and/or exposure time would fairly imbalance the antioxidant and oxidant systems. We also showed that naloxone could improve the antioxidant activity, at least by up-regulating the CAT level.

According to previous findings, chronic and acute exposures to morphine potentially result in hepatotoxicity, immunoreactivity, and genotoxic damages (2, 4). Therefore, we investigated the histopathological changes in the liver. The light microscopic analyses showed that naloxone in the morphine + naloxone group significantly ameliorated the morphine-induced nuclear degeneration, necrosis, fibrosis, vasodilation, and immune cell infiltration. Moreover, we found a significant intra-hepatocellular carbohydrate withdrawal in the morphine-sole group. According to previous reports, morphine is able to enhance the blood glucose level (12, 23, 24). Therefore, it can be suggested that morphine up-regulates blood glucose by discharging the hepatic carbohydrate content; severe carbohydrate withdrawal confirms this theory.

Overall, although chronic exposure to morphine (5 mg/kg/day) did not significantly change the serum antioxidant and hepatic enzyme levels, it could fairly induce hepatotoxic effects. Therefore, serum markers, including antioxidant enzymes, hepatic enzymes, and lipid profiles (cholesterol and TG) are not appropriate parameters to confirm the possible adverse effects of morphine on liver tissues. Moreover, naloxone, even at the administrated dose in this study, was able to protect liver tissues against morphine-induced damage, apart from its boosting effect on hepatic enzyme activities.

Our findings showed that morphine and naloxone co-treatment did not change the level of serum markers, such as GPx, SOD, cholesterol, and TG in rats. Meanwhile, naloxone, when co-administrated with morphine, could reduce the morphine-induced increase in HDL level and up-regulate hepatic enzyme activity. Moreover, it was found that apart from unchanged serum markers, morphine could potentially induce hepatotoxicity, and at the same time, naloxone was able to ameliorate morphine-induced histopathological damages. Based on our findings, it can be suggested that serum markers do not fully represent the detrimental effects of morphine and ameliorative effects of naloxone on liver tissues. However, further studies are needed to uncover the precise mechanism of naloxone effects on morphine-induced hepatotoxicity at cellular and molecular levels.

The authors would like to acknowledge the financial support of the study by the research and technology counselor at Urmia University of Medical Sciences, Urmia, Iran.

Copyright © 2020, Author(s). This is an open-access article distributed under the terms of the Creative Commons Attribution-NonCommercial 4.0 International License (http://creativecommons.org/licenses/by-nc/4.0/) which permits copy and redistribute the material just in noncommercial usages, provided the original work is properly cited.
2020-08-26 11:51:54
Thanks a lot.