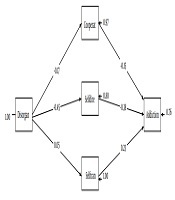 Social network sites (SNS) addiction has recently been a major concern and a common problem worldwide that makes it essential to examine the specifications of users and identify antecedents of it.

This study aimed at examining the relationship between attachment style and social media addiction with the mediating role of personality traits.

In this research, the sample population was comprised of all of the students of universities in Tehran, Iran, during the academic year of 2018 - 2019. The participants (n = 241) were selected from universities in Tehran using the conventional method. The data were collected using measure of attachment qualities (MAQ), Social Media Disorder scale (SMDS), and Cloninger’s Temperament and Character Inventory (TCI), and then the data were analyzed using the chi-square, correlation coefficient, and structural modeling tests by SPSS and LISREL software.

The results showed there is a significant relationship between the worry-ambivalent (r = 0.308, P < 0.05) and the disorganize-ambivalent (r = 0.322, P < 0.05) (attachment styles) and the SNS addiction. Moreover, the structural model showed that among attachment styles, the ambivalence-disorganize attachment could mediate the social network addiction based on the character dimension of self-directedness (CFI: 0.94, NFI: 0.92, RMSEA: 0.09).

The character dimension of self-directedness can reduce the adverse effects of insecure attachment and thus reduce the risk of addiction to SNS.

Social-virtual addictions have recently become a major concern and a common problem worldwide. The use of social networking sites (SNS), such as Telegram, Instagram, WhatsApp, YouTube, and other SNS, has dramatically changed the way people socialize, share information, work, perceive others, and present themselves (1). Moreover, SNS addiction has been introduced as a new behavioral addiction, along with increasing social network sites (2). Addiction to SNS is defined as a considerable concern for social networks, great interest in using social networks, spending much time and effort on social networks so that it harms other social, occupational, and academic activities, interpersonal relationships, or psychological well-being and health. In addition, SNS addiction is experienced as a subjective feeling of lack of control in which the person uses social networks highly despite the negative effects of using social networks and attempts to change or control them (3).

Theoretical and empirical models discuss that dispositional and sociocultural factors and behavioral promotions are effective in addition to SNS (4). The attachment theory considers the character differences in the performance of the attachment system and mediates the close relationships (including relationships with parents and romantic ones) as a behavioral regulator system, reflects character-based cognitions and emotions of individuals, and anticipates different methods to make interaction with friends and strangers. Empirical evidence supports the mediating role of attachment in using SNS and indicates that attachment style participates in the conceptual integration of SNS with personality traits (5).

Furthermore, previous research showed that personality traits stand out as one of the most important factors for understanding social-virtual addictions (6). Researchers have shown that social networks can form and reflect our characters (7). Personality traits are stable characteristics that are not readily changeable; they are stable and durable response tendencies toward different stimulants in the same way and can predict the behavior of a person in various situations (8). These traits may make the person vulnerable to some disorders. Personality traits have been investigated using the Temperament and Character Inventory (TCI), which is based on Cloninger’s theory. The TCI is a battery of tests designed to assess differences between people based on seven basic dimensions of temperament and character (9).

Seemingly, previous studies on emerging virtual addictions have focused on internet and online gaming addiction without sufficient attention to social networking. Moreover, former studies that examined the relationship between virtual addiction and personality traits usually used the five-factor NEO Personality Inventory. However, Cloninger’s Temperament and Character Inventory (TCI) seems to be a more suitable instrument to test social network addiction because this inventory includes both temperament and character dimensions. Moreover, the main weakness in studies on social network addiction is a lack of a clinical instrument to assess social network addiction, in particular in Iranian studies that do not have a proper clinical tool. Hence, this study aimed to fill this gap by using the “Social Media Disorder scale”, which is designed based on the diagnostic criteria of the diagnostic and statistical manual of mental disorders (DSM-5) (10). Such studies can provide suitable and evidence-based theoretical and therapeutic frameworks for such disorders by expanding the relevant knowledge range. The wide use of and interest in social media, as well as spreading development of them, make it essential to examine the specifications of users and identify antecedents of social network addiction. It will be possible to design proper interventions and prevent such addiction if factors affecting the excessive use of social networks are identified.

According to the mentioned points, this study aimed at examining the association between attachment style of individuals and social network addiction with the mediating role of personality traits.

The statistical population of this study includes all of the students who were studying at universities in Tehran, including universities of the Ministry of Health and Ministry of Science such as governmental, Azad, Payam Noor, and non-profit universities. The inclusion criteria for participants were (A) being a student in universities located in Tehran; (B) informed consent to participate in research. The exclusion criteria were (A) not answering demographic questions or at least one of the scales; (B) the lack of verbal agreement to participate in the research. Participants were selected using the convenient sampling method. To calculate the sample size, the below formula was used (11):

The path in the causal model represents the effect of one variable on another. Factor load is a numerical value that determines the intensity of the relationship between a hidden variable and the corresponding explicit variable during the path analysis process. Error indicates the amount of variance of the endogenous variable that is explained by the variables affecting it.

A) Measurement of Attachment Qualities (MAQ): Carver (1997) designed this questionnaire to measure four items of attachment. This measure consists of 14 items that their responses are scored based on a 4-point scale from 1 (strongly disagree) to 4 (strongly agree) (12). Cronbach’s alpha coefficient of Carver’s study (1997) was 0.85, 0.68, 0.71, and 0.69 for secure, avoidant, worry-ambivalent, and disorganize-ambivalent attachment styles, respectively. The Persian version of this questionnaire has been normalized for Iranian society by Isanejad et al. (13). They obtained Cronbach’s alpha coefficients of 0.76, 0.81, 0.83, and 0.85, respectively.

B) Social Media Disorder Scale (SMDS): This scale was designed by Regina van den Eijnden, Jeroen Lemmens, and Patti Valkenburg in 2017. This instrument was designed based on the DSM-5 factors for Internet gaming disorder. The long-form of this scale consists of 27 items. Three items have been allocated to nine criteria. These criteria measured by this scale are preoccupation, tolerance, withdrawal, displacement, escape, problems, deception, displacement, and conflict. High reliability of this scale has been reported by designers (Cronbach’s alpha, 0.81) (10). A preliminary study of normalization of this scale on Iranian students led to the Cronbach’s alpha coefficient of 0.88.

C) Temperament and Character Inventory (TCI): This inventory consists of 125 items, that respondent responds to true-false answers. TCI includes four scales related to temperament (novelty seeking, harm avoidance, reward dependence, and persistence) and three scales associated with a character (cooperativeness, self-directedness, and self-transcendence). This test was used for the first time in Iran by Kaviani and Poornaseh (14), who obtained reliability coefficients of 0.96, 0.91, 0.61, 0.76, 0.95, 0.85, and 0.88, respectively.

Table 2. Number of Members in the Social Network, Spending Hours, and Membership of Respondentsa

aCorrelation is significant at the 0.05 level (2-tailed).

bCorrelation is significant at the 0.01 level (2-tailed).

The final and fourth hypothesis assumes that personality traits play the mediating role in the relationship between attachment styles and social network addiction.

Considering the multivariate nature of the fourth hypothesis, the path analysis method was used in hypothesis testing to examine the mediating role of personality traits. First, standardized coefficients of direct effect, indirect effect, total effect, and multiple correlations between variables are examined then five indicators of Chi-square to degrees of freedom (χ2/df), comparative fit index (CFI), the goodness of fit index (GFI), the normalized fit indicator (NFI), and the root mean square error of approximation (RMSEA) were evaluated. The model of equations suggests that χ2/df lower than 3, RMSEA coefficient lower than 0.08, and fit indicators GFI, CFI, NFI with rates close to 0.95 are acceptable fit indicators of the structural equation model.

The third hypothesis suggested a significant statistical correlation between social network addiction and personality traits. The obtained results showed a significant relationship between the temperament dimension of personality- except for reward dependence- and vulnerability to addiction. Previous studies have shown no difference between personality traits in drug and internet addiction (24). Similar to previous studies, a higher novelty-seeking in people, a higher vulnerability to anxiety and depression, sensation seeking, and positive attitude toward addiction. This finding was in line with the results of these studies (25, 26). Moreover, there was a negative and significant relationship between the temperament dimension of persistence and social network addiction, which is matched with previous studies results (27). Findings obtained from these studies have shown that lower persistence leads to a higher vulnerability of people to addiction. Therefore, it can be explained that preference for instant rewards, a tendency toward sensation-seeking, novelty-seeking, finding simple ways to achieve the reward, the lack of attempt, insisting on doing things, and short reaction time are components that expose a person to higher risk (28). The present study found a negative and significant association between social network addiction and character dimensions of cooperativeness and self-directedness, which was in line with previous researches (29, 30). It means people with higher score they in mentioned specifications, will have a lower probability of social network addiction. Addicted people indicate lower levels of self-directedness and cooperativeness. It can be explained that low levels of self-directedness and cooperativeness in these persons indicate the concept of escape and inhibition response based on the neurological approaches and this may expose drug users to at a higher risk of impulsivity and behavioral problems (31).

The authors would like to sincerely thank all the Students of Tehran Universities who participated in and contributed to this study. The present paper was extracted from the MA dissertation of the first author.