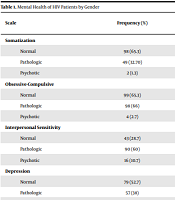 Various factors, like mental disorders, may affect the desire for medication and adherence in HIV/AIDS patients.

Finally, 150 patients of Behavioral Disease Counseling Center of Shiraz were selected by a convenience method and were evaluated by Symptom Checklist-25 (SCL-25) and Medication Adherence Questionnaire (MAQ). Chi-square, Kruskal-Wallis, Mann-Whitney U tests were, Spearman's correlation coefficient and logistic regression were used to analyze the data by using SPSS-20 (P < 0.05).

Treatment of mental disorders, particularly anxiety, can be one of the most effective ways to increase drug compliance in HIV/AIDS patients.

For those who suffer from some diseases, arbitrary discontinuation of medication may lead to the recurrence of the disease or even death; hence, medication adherence has always been an indispensable necessity, and its ensuring has been a major challenge in health policy-making (1). Medication adherence is of crucial importance for those who receive antiretroviral therapy (ART), as it has both preventive and therapeutic properties for HIV/AIDS treatment (2). Identifying factors that affect medication adherence can help physicians to address the underlying causes of low adherence, which in turn translates into an improved treatment process. Among different factors that result in low adherence, it appears that psychological factors are the most important known factor affecting medication adherence. According to studies conducted in Iran, medication adherence among Iranians is 60.4 - 69.4% (3), and some reported adherence and non-adherence of 34.4% and 64.5%, respectively (4). However, the measured adherence depends on several factors, including research setting and applied tools.

Several studies reported low levels of adherence to treatment among HIV positive patients and suggested that it can be increased by psychological consultations intended to address depression and anxiety (5, 6).

Patients' psychological motivation to continue treatment is a crucial factor. Patients may lose their interest in completing treatment for reasons such as mental disorders, desire for suicide, depression, and fear of treatment stages (7). On the other hand, numerous scientific reports confirmed that mental disorders like borderline personality disorder, mood disorders, and anxiety disorder are common among this group (8). Psychiatric patients have low levels of medication adherence, and their possibility of medication withdrawal is very high (9).

The extent to which this adherence is based on the current mental state of patients can be evaluated from two perspectives. First, the mental state of these individuals depends on the experienced conditions, which may lead to medication adherence or withdrawal. Second, the incidence or improvement of psychological diseases during the HIV patient treatment can increase or decrease the tendency to the highly active ART (HAART) medication adherence.

Following a cross-sectional design, the current study was conducted at the Behavioral Disease Counseling Center of Shiraz. The final sample size was calculated as 150 subjects following similar studies with a confidence interval of 95% (4), with special emphasis on medication adherence. Informed written consent was obtained from all participants, which was tuned by the Vice-Chancellor for Research of the Shiraz University of Medical Sciences. All patients were included in the study, except for the people who had completed the questionnaire.

Before asking participants to fill the data collection tools, all participants were asked to fill the written informed consent. In addition, all principles of the Helsinki declaration and its further amendment were followed. The study was approved by the Medical Ethics Committee on Human Research of Shiraz University of Medical Sciences (code: IR.SUMS.REC.1398.550), without the need to record IRCT.

According to one study, very good medication adherence was defined as the use of over 97% of medications prescribed by a physician for HIV/AIDS treatment (10); and mental disorder was determined based on the participants' score in the Symptom Checklist-25 (SCL-25).

It is a 25-item checklist intended to assess mental disorders in both healthy and HIV/AIDS cases. This checklist is scored on a five-point Likert scale, ranging from "Never" to "strongly". It has 8 subscales, namely somatization, obsessive-compulsive, interpersonal sensitivity, depression, anxiety, hostility, phobia, paranoia, and Psychoticism. A Cronbach's alpha of 0.97 is reported for this checklist (11).

This 40-item questionnaire has been designed and standardized by Seyed Fatemi et al. (2018) at Gorgan University to measure seven factors in medication adherence: intention to treat; the desire to participate in therapy; ability to adapt; the combination of treatment with life; medication adherence; commitment to medication; and uncertainty about treatment. The medication adherence determines based on the total score, as follows: a score of 0 - 25 is defined as weak, 26-50 as medium, 51 - 74 as good, and 75 - 100 as very good. Its reliability is evaluated by the test-retest technique. Also, its internal consistency is confirmed with a Cronbach's alpha of 0.92 (10).

Logistic regression analysis was performed to investigate the association between the medication adherence and mental state in patients with HIV/ AIDS by considering a cut-off rate of 5% for medication adherence and considering variables of age, marital status, employment status, and the transmission way of HIV/AIDS in the univariate analysis. Statistical significance was considered when P-value < 0.2.

As shown in Table 1, only somatization and interpersonal sensitivity (*) were significantly different between males and females.

According to the results of the SCL25, 78% of patients had normal mental health status, 21% had morbidity, and 1% had psychosis. Moreover, their difference was significant (P-value = 0.002), and the prevalence of the disorder was slightly higher in females than males (mean rank of 56.81 for males and 77.91 for females), which can be attributed to the difference between items of "somatization" and "interpersonal sensitivity" (P ≤ 0.05).

In the present study, 82.7% of respondents had very good medication adherence, 12.7% good, and 0.7 moderate, and none of them had low adherence. The difference between males and females was not statistically significant (P-value = 0.613).

4.2.3. The Association Between Mental State and Medication Adherence

According to the findings, there was an inverse correlation between medication adherence and the overall mental state (r = -0.269, P-value = 0.002).

Some psychological items such as OCD (r = -0.291), depression (r = -0.175), anxiety (r = -0.227), phobia (r = -0.335), paranoia (r = -0.232), and Psychoticism (r = 0.251) were significantly correlated with medication adherence. Furthermore, there was a significant negative association between three levels of adherence and total psychological score (P < 0.05). As the association was inverse, it can be argued that the higher the total score of mental state, the lower will be the score of all scales (at a normal level), which causes increase adherence (Table 2).

Table 2. Adherence Rates Base on Mental Status of Patients

Logistic regression analysis was used to analyze the association between compliance with drug adherence and mental status in patients with HIV/ AIDS. A cut-off value of 75% was considered for the adherence. Confounders such as age, marital status, employment status, and the roots of transmission were also considered, which had a P–value < 0.2 in the univariable analysis. A significant association was found between compliance and mental status, which means a positive association between mental state the chance of adherence (more than 69%) (OR = 0.31; CI 95%, 0.10-0.94; P-value = 0.040) (Table 3).

Medication adherence is an important issue that is under the influence of several individual or social factors such as psychological structure and type of psychological status. The present study aimed to determine the mental state of HIV/AIDS patients. According to the findings, 21% of patients had morbidity, and 1% had a psychotic disorder. A study reported that about 30% of patients received psychiatric treatment, which corresponded to 78% of patients' mental health (4). The results also indicated no significant difference between medication adherence in those with and without psychiatric treatment (P-value = 0.27). Some field studies indicated that those who received ongoing training in resilience, dealing with problems, social communications, how to cope with illness as well as medication consultation, medication adherence, and so on had better mental health. The above findings are consistent with those reported by Fawzi (2016), Johnsson et al. (2013), and Olley et al. (2004) (12-14).

Also, female's mental state was slightly more unstable than males, which can be attributed to the focus of SCL25 on neurotic axes and the higher prevalence of disorders among females (15). The difference was due to a significant difference in interpersonal sensitivity and somatization in both genders. As HIV diagnosis is associated with increased psychosomatic state and even may cause hypochondria, and since females are at enhanced risk of such states, the Somatization was higher in women. Furthermore, because of social problems such as stigma and discrimination in HIV cases, the interpersonal sensitivity scale was more appropriated for data collection (16). Concerning the HIV transmission method and patients' mental state, there was no significant difference in the total scores of individuals; however, there was a significant difference between somatization and interpersonal sensitivity scales.

Based on the findings, widows/widowers, those who were divorced, and those with temporal marriage, and unemployed people had worsened mental state; Nevertheless, those working in the public sector had better mental health state, which is consistent with studies by Horowitz (2004) and Paul & Moser (2009) and DSM5 report (2013) (17-19).

As mentioned before, our study also intended to determine the rate of medication adherence, and it was found that a majority of patients had a very good (a level of 75 - 100%) medication adherence (9). Some studies with a similar research design reported that those with less than 90% or 95% of adherence had continuous drug use (4, 20). The current study was based on a questionnaire that contained four levels of adherence (i.e., very good, good, moderate, and weak). Using a cut-off value of > 90% for adherence level, none of the participants had very good adherence, as the highest adherence score was 89. Also, 82% of participants had good medication adherence. A number of researchers believed using a categorization of adhered and non-adhered decreases the success rate (i.e., < 5%), due to various reasons, which results in social stigma.

The study showed that age is a cornerstone of medication adherence. That is, the higher the age, the more the medication adherence. Therefore, medication non-adherence or poor adherence, which occurs at very young ages, is risky behavior, which is consistent with the study by Barclay et al. (2007) (21). Some studies reported poor adherence at older ages (22) among those who suffered from neuropsychiatric disorders. As it is not in line with the findings of the present study, mainly because our center did not admit any case with neurological disorders during the study period. A similar association was found concerning the variable of education. So that, the higher the education, the higher the medication adherence, which is consistent with studies by Reisner (2009) and Murphy (2010) (23, 24).

The findings of the present study are not consistent with those reported by several previous studies that investigated the effectiveness of psychological factors that affect medication adherence in those who suffer from HIV/AIDS. The current study also investigated the impact of neurotic factors in medication adherence in HIV patients, using a pathological questionnaire. In general, gender, marital status, and employment could affect mental health in a way that female gender, being single or divorced, and having temporary and low-income jobs were associated with lower levels of mental health.

The limitations of the present study are as follows: (1) Sometimes, people's desire decreased for cooperation because of the problems of HIV. (2) Patients were usually in a hurry and there was not enough time for questioning. (3) Access to both sexes and in the same demographic situations was not possible.

This study was supported by the Vice-Chancellor for Research of the Shiraz University of Medical Sciences; therefore, we would like to thank the university for financial and moral support. We are also grateful to the Behavioral Disease Counseling Center of Shiraz, especially social workers who helped us with the project.