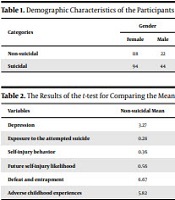 Suicide is an important concern with regard to mental health and needs more attention in Iran.

This study aimed to compare depression, exposure to suicide, self-injury, defeat, and entrapment, and adverse childhood experiences in suicide attempters and normal people.

The results showed a significant difference between groups on the mean values of depression (2.27 for the non-suicidal group vs. 3.87 for the suicidal group), adverse childhood experiences (5.82 vs. 0.95), exposure to the attempted suicide (0.28 vs. 0.50), self-injury behavior (0.36 vs. 2.13), and future self-injury likelihood (0.56 vs. 2.13). The most significant differences belonged to the defeat and entrapment variable and adverse childhood experiences (P < 0.01).

Thus, defeat and depression play an important role in predicting suicide, so we should intervene in these two states of mind.

Suicide is a serious mental health concern that needs more attention in Iran, because the suicide rate in this country is increasing, especially among people aged 15 - 24 years, and according to evidence, this age group has the highest suicide rate (1). Studies have shown that suicide may result from several factors such as defeat and entrapment (2), hopelessness (3), family and its relationships and problems (4), adverse childhood experiences, and substance abuse (5), depression (6), and exposure to suicidal behavior (7). The integrated motivational volitional (IMV) model of suicidal behavior is one of the newest theoretical models of suicide. It proposes that defeat and entrapment drive the emergence of suicidal ideation and that a group of factors, entitled volitional moderators (VMs), govern the transition from suicidal ideation to suicidal behavior. The core constructs of defeat/humiliation, entrapment, suicidal ideation, and suicidal behavior form the backbone of the model (8).

Depression is one of the factors that can predict and affect one's mental health (7). Furthermore, identifying the risk of suicide in depressed patients is essential to prevent suicide. Adverse childhood experiences are among the factors that play a key role in suicide and are associated with mental health problems in children and adolescents (9). Exposure to the suicide of friends or family members is another factor that increases the risk of suicide. A modeling or imitation model requires a clear temporal order in which exposure is the antecedent of a suicide attempt in the exposed person. According to Joiner (10), repeated self-injury can increase a person's capability for suicide. Defeat and entrapment are other factors driving a person to commit suicide (3).

According to the latest research and models in the world related to suicide, variables such as ACEs, defeat, and entrapment, and exposure to suicide are among the important variables in predicting future suicidal behavior. In Iran, no comprehensive study of variables in the suicide attempt group, as well as its comparison with the normal group, has been done yet.

The findings of this study help determine the importance of these variables in a suicide attempt and their significance compared to normal groups. Another point is that these findings in the group of suicide attempters were collected from those who had just taken action whose action did not lead to death. These suicidal ideations can provide us with comprehensive and accurate information about the underlying cause of their actions.

The present study is an ex post facto research. The study population consists of two groups of (1) all suicide attempters hospitalized in the emergency department of Imam Khomeini hospital in Ardabil city, Iran. Of these, 138 were recruited as study samples using a convenience sampling technique; (2) all students with no suicide attempt at the University of Mohaghegh Ardabili. Of these, 140 were selected using a random cluster sampling technique. Sampling in the hospital was conducted for two months after obtaining permission from the related organizations. The research objectives and methods were explained to the two groups, and they were assured of the confidentiality of their information. The inclusion criteria for the suicidal group were hospitalization for attempting to commit suicide, having the consciousness to complete a questionnaire, and willingness to participate in the study. For the non-suicidal group, the criteria were attending university, not being under treatment by a psychiatrist, and willing to participate in the study. After obtaining informed consent from the samples, the questionnaires were distributed among them and collected after completion. The collected data were analyzed with SPSS v.23 using descriptive and inferential statistics. An Independent t-test was used to compare the variables between the two groups.

The study measures included (1) the short defeat and entrapment scale (11), (2) Patient Health Questionnaire-2 (12), (3) adverse childhood experiences (13), (4) exposure to suicidal behavior questionnaire (14), (5) non-suicidal self-injury (NSSI) assessment tool (15), and (6) future self-injury likelihood assessment that was measured by the following question: “How likely are you to intentionally hurt yourself in the future?”. The data were analyzed using t-test.

Table 1 represents the demographic characteristics of the participants.

Table 1. Demographic Characteristics of the Participants

Table 2 represents the t-test results for comparing the mean of study variables between the two groups.

Table 2. The Results of the t-test for Comparing the Mean of Study Variables between Two Groups

There was a significant difference between suicide attempters and non-suicidal people in terms of depression, exposure to attempted suicide, self-injury behavior, feeling of defeat and entrapment, and ACEs.

This finding is consistent with previous studies’ findings (9, 12, 14, 16).The emergence of suicidal ideation is a consequence of a process that begins with a sense of defeat and humiliation. Defeat and humiliation can also be characterized by social loss and rejection. People who commit suicide are very likely to be at the bottom line and think that they have a predetermined destiny and cannot change that. Since their cry for help is not answered, it makes their sense of defeat and entrapment worse than ever, which leads them to commit suicide.

This study had some limitations. The two study groups were not similar in terms of age and educational level. One group was college students aged 18 - 32 years with no suicide attempt, and the other group was those who had attempted suicide. Moreover, although the consciousness state of the suicidal people was assessed during the completion of questionnaires, it may still be effective due to hospitalization, insufficient awareness, and memory impairment in recalling past events. Finally, according to the findings of the present study, we must be very sensitive to the symptoms of defeat and entrapment in individuals. If we see someone constantly lamenting “I am miserable,” “I am unlucky,” “I cannot”, I am out,” “life is not worth living,” “I am done,” “my destiny is predetermined,” etc., these symptoms are extremely sensitive indicators of defeat and entrapment, and can be a very important trigger for a suicide attempt. About women and girls, we need to be more cautious as they are more at risk. Further studies should evaluate the symptoms of hopelessness and depression in individuals. Moreover, since depressed people have higher impulsivity, when we see a person with a high impulsivity level, there should be a likelihood of depression and possible future suicide ideation and attempt.

The authors appreciate all the participants' time and effort and the University of Mohaghegh Ardabili for supports.