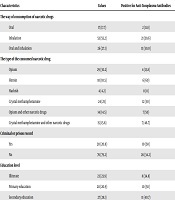 Evaluation of Toxoplasma gondii Antibodies in Addicted and Non-Addicted Women in Zahedan, Southeast of Iran

Toxoplasma gondii might lead to behavioral changes in patients with toxoplasmosis. Since addicts are considered as individuals with behavioral, social, and psychiatric changes, we need to evaluate the prevalence of toxoplasmosis in addicts.

This cross-sectional study was conducted to measure Toxoplasma antibodies using the enzyme-linked immunosorbent assay (ELISA) in addicted women who were kept at the Zahedan Welfare Center in 2018.

Toxoplasma gondii is a unicellular protozoan that is classified in the genus Toxoplasma. The Toxoplasma parasite infects all cells with nuclei in different hosts, including mammalians, humans, and birds. This parasite leads to the induction of an infectious disease in the hosts, which is known as toxoplasmosis (1-3).

Acute toxoplasmosis occurs in the hosts due to the presence and replication of a fast-growing form of the Toxoplasma parasite, which is named as the tachyzoite. Provoking the innate and adaptive immune system of the host decreases the metabolism of the tachyzoite and changes it to bradyzoite. The bradyzoites are often enclosed in a cyst in different tissues, including the muscle and brain (4, 5). Rupturing the tissue cysts and releasing the bradyzoites in infected hosts with chronic toxoplasmosis and also the presence of tachyzoites in infected hosts with acute toxoplasmosis can lead to the production of Toxoplasma IgG and IgM antibodies in host sera (6, 7). The identification of Toxoplasma-specific antibodies (IgG and IgM) and the investigation of Toxoplasma IgG avidity are considered the bases for the laboratory diagnosis of acute and chronic toxoplasmosis. The detection of specific antibodies against Toxoplasma is conducted using serological tests, including latex agglutination test, indirect fluorescence antibody test, hemagglutination test, and enzyme-linked immunosorbent assay (ELISA) (8-11). Easy access, low cost, and high sensitivity and specificity suggest ELISA as the most common assay in the detection of Toxoplasma-specific antibodies.

The seroepidemiology of toxoplasmosis is estimated at 48% - 74.6% in the north, 22% - 37% in the south, 33% - 44% in the northwest, and 27% - 54% in the central areas of Iran using different serological tests (1). In recent years, some studies have revealed the presence of Toxoplasma-specific antibodies in blood donors, diabetic patients, pregnant women, and patients with mental disorders (1, 12-17).

The Toxoplasma parasite might lead to the alteration of the dopaminergic signaling mediators; thus, behavioral changes may occur in patients infected with toxoplasmosis. Also, toxoplasmosis induces and progresses the central nervous system and psychiatric disorders (18, 19). Since addicts are considered as individuals with behavioral, social, and psychiatric changes, we need to evaluate the prevalence of toxoplasmosis in addicts (20).

This study was designed to measure Toxoplasma IgG and IgM antibodies using the ELISA in addicted women who were kept at the Zahedan Welfare Center in 2018.

A cross-sectional study was done in 2018 on 96 addicted women with high-risk behaviors who were kept at the Zahedan Welfare Center. Ninety-six healthy (non-addicted) women were selected as the negative control group. All women who participated in this study were 20-50-years-old, with histories of street life and narcotic drug consumption. None of them were addicted to alcohol products. All participants were questioned about age, education, type of consumed narcotic drug, and the way of the consumption of the narcotic drug. After filling out the questionnaires, blood samples were taken (4 mL of blood from each person) without the use of the EDTA anticoagulant. All human specimens were obtained upon the approval of the Ethics Committee of Zahedan University of Medical Sciences, Zahedan, Iran (code: IR.BUMS.REC.1396.010). Informed consent was taken from all participants in this study.

After blood sample collection, all samples were centrifuged at 1250 × g for 8 min, and sera were separated. In the next step, opium rapid strips (Amazon Company, USA) were used to confirm the addiction status of the participants. To this end, 100 µL of each serum (addicted and non-addicted groups) was poured on the opium rapid strips. The remaining sera were kept at -20°C for ELISA. All sera of addicted and non-addicted women were evaluated for the detection of Toxoplasma IgG and IgM antibodies using specified ELISA kits (Pishtaz Teb Company, Iran). It has been performed based on the manufacture’s guidelines.

The SPSS software (version 20) and chi-square test were applied for analyzing the obtained data. A P value of ≤ 0.05 was considered statistically significant.

All sera of addicted women showed positive results for addiction using opium rapid strips. However, the sera in the control group (non-addicted women) indicated negative results. Based on the kits’ instructions, the observation of two marker lines on the strip was considered as a positive result.

The results showed that the seroprevalence of Toxoplasma IgM antibody in addicted women with high-risk behaviors was 0.96% (positive case = 1), which was not statistically comparable with the control group (positive case = 0). Also, the seroprevalence of IgG antibody was 37.5% in addicted women with high-risk behaviors and 27.1% in the control group (P value = 0.16) (Table 1).

Table 1. The Frequency of Toxoplasma IgM and IgG Antibody Titers in Addicted Women with High-Risk Behaviors in Comparison with the Control Groupa

Table 2. The Frequency of Toxoplasma IgG Antibody Titer in Addicted Women with High-Risk Behaviors According to Education Level, Way and Type of the Consumption of Narcotic Drug, and Criminal or Prison Historya

The obtained data were not significant regarding the relationship of Toxoplasma IgG antibody titer and the education level in addicted women (P = 0.53) (Table 2).

The seroprevalence of toxoplasmosis has been investigated in diabetic patients, pregnant women, and patients with mental disorders in recent years (1, 12-16). However, the seroepidemiological studies of toxoplasmosis in addicts are rare due to the specific psychological, behavioral, and social conditions of addicts and the possibility of the presence of different infectious diseases including hepatitis and acquired immunodeficiency syndrome (AIDS) in these individuals. According to the relationship between latent toxoplasmosis infection and risky behaviors leading to death, the indication of toxoplasmosis seroepidemiology is an important issue that should be considered more, especially in addiction treatment centers (20, 21).

The correlation between toxoplasmosis and ethanol consumption has been examined in ethanol consumers in a study in 2017. The study revealed a positive relationship between the presence of Toxoplasma IgG antibody and the high consumption of psychoactive substances such as ethanol in the consumers (20). However, they did not point out the possible causes of this correlation. Our obtained results regarding the rate of Toxoplasma IgG antibody titer in addicted women were not significant in comparison to the control group. Presumably, the type of the consumed narcotic drug is effective on the rate of toxoplasmosis in addicts.

According to the low difference in the rate of Toxoplasma IgG between addicts and controls, and the low rate of Toxoplasma IgM, the possible relationship between addiction and toxoplasmosis was not revealed in this study. Presumably, different factors can be involved, so more studies are needed to elucidate the reason for the high seroprevalence of toxoplasmosis in addicts.

We are grateful to the Central Welfare of Zahedan for the support of sampling in this work.