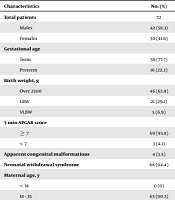 Congenital heart defects (CHDs) are the most common congenital malformations at birth. Substance abuse has increased dramatically over the past two decades. It also can affect neonates of drug-abusing mothers.

This study aimed to elucidate the possible association of maternal drug abuse with CHDs in their newborn infants.

In this study, 72 neonates who were born during 6 years in three teaching hospitals are studied. Echocardiography was performed by a single pediatric cardiologist using two-dimensional and color Doppler echocardiography. The data were analyzed using descriptive statistics.

In our study, the prevalence of CHD in newborns of drug abuser mothers was significantly higher than the normal population of infants. Hence, echocardiographic screening of these newborns seems to be logical.

Congenital heart defects (CHDs) are the most common congenital malformations at birth, which not only has high mortality and morbidity rates but also imposes a high economic burden on public health systems. Environmental exposures, as well as inherited factors, are part of the proposed etiology of these defects, so recognition and reducing them will have notable effects on infant mortality and morbidity rates (1-3).

Substance abuse as an environmental exposure has increased dramatically over the past two decades, and nearly 90 percent of women with substance abuse are of childbearing age. Substance abuse can increase the incidence of complications such as placental insufficiency, intrauterine growth restriction and premature births, neonatal withdrawal syndrome, and congenital anomalies.

Some studies have suggested CHDs as the most common type of congenital anomalies in infants exposed with substance abuse (4, 5). However, there are studies that demonstrated no obvious association (6, 7). So this study strove to elucidate the possible association of maternal drug abuse with CHDs in their newborn infants.

All neonates admitted to neonatal intensive care units, or neonatal wards of three teaching hospitals (Firoozabadi, Hazrate Rasool Akram, and Shahid Akbarabadi hospitals) in Tehran (Iran) from substance-abusing mothers (according to self or proxy report or positive screening tests) from March 2011 to March 2017 were investigated.

Exclusion criteria were infants of diabetic mothers, maternal body mass index over 25, not taking folic acid supplementation during pregnancy, and history of CHDs in siblings. Other cases included in the study and echocardiography was performed by a single pediatric cardiologist using two-dimensional and color Doppler echocardiography.

Of 84 eligible neonates for investigation, 12 cases were omitted due to the exclusion criteria, and 72 patients were investigated.

Patients’ characteristics are summarized in Table 1

From all included mothers, 72 (85.7%) had no underlying disease. One had hypertension, one had gestational diabetes mellitus, and one mother had BMI > 30, which were omitted from the study. One patient with a history of valproic acid consumption and one case (due to not receiving folic acid supplementation) were also omitted. Other cases were excluded due to having a family history of CHD or history of drug misuse but lack of evidence of substance abuse during pregnancy.

Of 38 abnormal echocardiographies, 35 (48.61% of total and 92.11% of abnormal echoes) had only mild CHD, with atrial septal defect (ASD) and Patent ductus arteriosus (PDA) as the most prevalent problems.

Characteristics of newborns with major CHDs are summarized in Table 3.

Table 3. Characteristics of Newborns with Major CHDs Type of Drug

There was also one sample of PFO + double RV chamber that the mother was taking valproate for, which she was not included in the study.

In this study, we considered simultaneous abuse of the central nervous system (CNS) depressants such as opiates and CNS stimulants such as methamphetamine as multidrug abuse. Mothers of all cases with major CHDs were multidrug abusers.

Characteristics of newborns with major CHDs are summarized in Table 4

The incidence of CHDs in neonates of mothers who were only abusing heroin was 40%, and among neonates of multidrug abuser mothers who also were using heroin was 50%. This statistic for opium, methamphetamine, and methadone was 47% and 51.5%, 57.1% and 59.2%, 57.1 and 64.3% respectively. The prevalence of CHDs in the neonates of multidrug abuser mothers was 55.26%. There was no significant difference concerning the prevalence of neonatal CHD with the type of misused drugs, and methadone was not approved as a safe alternative to other drugs.

In the present study, 72 neonates were evaluated. The most prevalent misused drugs were opium (33 cases including multi-drug abusers) and methamphetamine (27 cases including multi-drug abusers). This finding is consistent with the study by Saleh Gargari et al. (8) performed in Tehran, which reported opium as the most commonly consumed substance, mainly due to its higher availability and lower cost (as Afghanistan, a neighbor country, is the largest producer). However, this finding is different from the study by Sharifian et al. (9) performed in Mashhad Province, which reported higher consumption of methamphetamine than opium, which could be due to the potential effect of geographic and social conditions. Such differences have been reported in recent similar studies (10). In spite of the increasing number of drug addiction treatment centers in Tehran, in this study, only 11.9% of the pregnant drug abuser mothers were under methadone treatment. This issue is also reported by other studies (11).

Seventy-two mothers did not report any underlying illness, and the mothers ‘medications used to treat their diagnosed illnesses were far less than expected, which can be attributed to their inattention to physical and health problems due to their low socioeconomic status and lack of a supportive family. Concerning the prevalence of perinatal complications, drug withdrawal syndrome (95.24%), CHD (52.78%), preterm birth (33.33%), and low birth weight (LBW) (25%) were the most prevalent complications in the present study. Sharifian et al. (9) reported that Apgar score above 7 in fifth minutes was 87.3% and major abnormalities were observed in 7.2% of neonates born to addicted mothers, which is consistent with our study (97.62% and 4.76%, respectively) and the study by Saleh Gargari et al. , which reported a prevalence of 4.1% for major anomalies (8, 9).

In the present study, symptoms of neonatal withdrawal syndrome were observed in 95.24% of neonates, which is consistent with the study by Vucinovic et al. (4). Also, the prevalence of CHDs in neonates born to addicted mothers was 52.78%, which is significantly higher than the normal population of infants in whom the prevalence of CHDs diagnosed using echocardiography have been reported 2.2 - 5% (12-14). This result, to some extent, is consistent with the study by Vucinovic et al. (4), who reported that congenital anomalies in these infants were four times higher than the normal population, and CHD is reported as the most common form of such anomalies. The most common CHDs, based on abnormal echocardiography, were mild types (92.11%), among them, ASD was found in 55% of cases (alone or with other anomalies). In the study by Yu Feng et al. VSD is reported as the most prevalent CHD in infants born to mothers consuming cannabis and cocaine, but other substances were not studied (15).

There was no significant difference concerning the prevalence of CHD in neonates with different types of drugs consumed by mothers. In the present study, methadone replacement therapy was not confirmed as a safe alternative to other drugs associated with CHDs. Vucinovic et al. (4) also did not approve methadone replacement therapy because of the high likelihood of neonatal withdrawal syndrome seen in 63% to 85% of infants. However, they mentioned that measuring blood levels of medication and adopting an organized approach to monitor and controlling the pregnancies of addicted mothers are useful for reducing childbirth complications.

The study of substance abuse due to its negative attitudes in societies and, in particular, the gender of women and the secrecy behind it has always been subject to many restrictions. On the other hand, as half of the cases had multiple-drug use (43 cases, 51.3%) and due to ambiguities about the exact dose and duration of drug misuse among participants, the sample size was significantly reduced by separating, which made some comparisons and statistical tests impossible. Only mothers of neonates delivered at our hospitals had a urine toxicology test for addiction, and for cases referred from other hospitals or those who were included after delivery, information were obtained based on maternal history. Because Finnegan Neonatal Abstinence score was not calculated for all neonates in our study, we could not assess and compare the severity of neonatal withdrawal in our patients.

There are several asymptomatic cases of CHDs, especially in the first months of birth, which their diagnosis requires echocardiography. Therefore, it is highly difficult to provide a sufficient sample. As little information is available, evaluation of asymptomatic CHDs with echocardiographic screening is one of the strengths of the present study. Also, in this study, compared to previous studies, samples were screened for many confounders, and more various types of drugs were evaluated.

In the present study, the prevalence of congenital heart defects in newborns of drug abuser mothers was 52.78%, which is significantly higher than the normal population of infants in whom the prevalence of CHDs diagnosed using echocardiography have been reported 2.2 - 5%.

The effects of opioids, especially opium (as the most prevalent misused drug in our study) on migration and cell proliferation in the first 20 weeks of pregnancy, as well as their influence on cell differentiation, can be used to justify teratogenic effect of these drugs on the cardiovascular system (16).

There was no significant difference concerning the prevalence of CHD in infants with different types of drugs abused by mothers. This study demonstrated that echocardiographic screening of infants of drug abuser mothers may be logical.

We thank our colleagues from neonatal intensive care units and neonatal wards of Firoozabadi hospital, Hazrate Rasool Akram hospital, and Shahid Akbarabadi hospital who helped us to collect information of this study

Copyright © 2021, Author(s). This is an open-access article distributed under the terms of the Creative Commons Attribution-NonCommercial 4.0 International License (http://creativecommons.org/licenses/by-nc/4.0/) which permits copy and redistribute the material just in noncommercial usages, provided the original work is properly cited.
download pdf 103.31 KB Get Permission (article level) Import into EndNote Import into BibTex
Number of Comments: 0