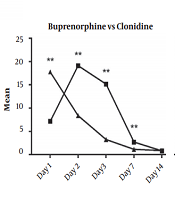 There is an increasing trend in treatment demand for opioid dependence among adolescents in Iran. However, evidence regarding effective treatment in this population is very limited.

This study aimed to compare the efficacy of clonidine and buprenorphine for inpatient medically-assisted withdrawal of adolescents with opioid dependence aged 12 and 16 years.

The study is an open-label, randomized controlled trial with convenience sampling. In total, 36 adolescents took part in this study who were randomly assigned to buprenorphine or clonidine groups. The Clinical Opiate Withdrawal Scale was used to monitor the withdrawal severity on days one, two, three, seven, and 14.

The findings showed both treatments were effective. However, withdrawal symptoms in the buprenorphine group showed a greater reduction in the first seven days of withdrawal treatment. There was no significant difference in the length of hospitalization between the two groups. Patients with a longer duration of opioid use showed higher levels of withdrawal symptoms in the buprenorphine group on days one and three.

Buprenorphine treatment was found to be more effective than clonidine in controlling opioid withdrawal during the initial days of treatment. However, it lost its superiority towards the end of the follow-up. It seems that clonidine could be a good alternative to buprenorphine in the medically-assisted withdrawal of adolescents with opioid dependence.

Opioid misuse is a worldwide concern across the entire lifespan in the general population. There has been a permanent increase in opioid misuse over the last decade that has resulted in considerable harm to individuals, families, and the wider community (1). It is estimated that 53.4 million people have used opioids at least once (2), and 40.5 million had opioid dependence in 2017, globally (3). Opioid use is associated with the highest proportion of the burden of disease among all illicit drug use disorders (2, 4).

The epidemic of opioid use disorder in adolescents and young adults is a growing problem that can lead to psychosocial impairment. Its medical morbidity includes criminal justice involvement, school dropout, unemployment, co-occurring psychiatric disorders, hepatitis C virus, human immunodeficiency virus, injection site infection, and the worst of all, premature death associated with overdose (5). An earlier age of opioid use onset is associated with worsening consequences. Adolescents who were primarily using opioids had an earlier age of onset of any substance use than those who were current users of cannabis or alcohol (6).

Clonidine, an alpha-agonist agent, has been used for the treatment of opioid withdrawal (15). Clonidine provides dose-related reductions in blood pressure and heart rate. Furthermore, clonidine reduces the autonomic signs of opioid withdrawal and suppresses the subjective discomfort of it (16). Studies have confirmed the effectiveness of clonidine in the management of withdrawal symptoms of opiate dependence (17-20).

Despite many studies showing the effectiveness of buprenorphine and clonidine in adults, there is a lack of studies to evaluate compare these medicines in adolescents. This study aimed to compare the efficacy of clonidine and buprenorphine for inpatient medically-assisted withdrawal of adolescents with opioid dependence aged 12 and 16 years.

A total of 38 patients were enrolled in this open-label randomized trial with convenience sampling. The research was done in Ali-Ebne-Abitaleb hospital in Zahedan, southeast of Iran. The participants were recruited from March 2018 to December 2019. Two psychiatrists diagnosed patients. The sample size was calculated based on the study by Motamed et al. (21) A block randomization scheme with a block size of six was used to assign participants to clonidine or buprenorphine groups. All participants received inpatient, medically-assisted withdrawal with buprenorphine or clonidine. Study assessments were completed on days one, two, three, seven, and 14 (Figure 1). 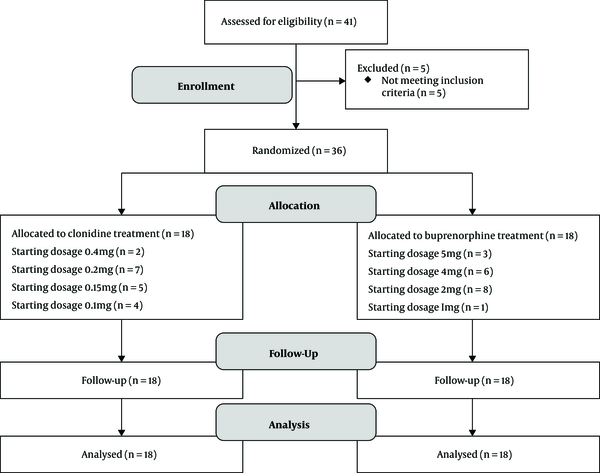 Inclusion and exclusion criteria: Participants included self-referred adolescents who met ICD-10 criteria for opioid dependence. All the participants with opiate use disorder aged 12 to 16 years were included in the study. The patients were excluded if they had other psychiatric disorders or known sensitivity to study medications.

In the buprenorphine group, medicine started on the first day of hospitalization. Therefore, patients did not experience the withdrawal symptoms on day one, but medicine for the clonidine group started when their withdrawal symptoms appeared. Buprenorphine group: We applied buprenorphine according to the current community treatment plan, including baseline screening and follow-up on days two, three, seven, and 14. Participants in this group were given buprenorphine at a dose of 1 - 6 mg. The baseline in this group was the first day of hospitalization.

Clonidine group: We applied clonidine according to the current community treatment plan, including baseline screening and follow-up on days two, three, seven, and 14. Participants in this group received clonidine 0.1 - 0.4 mg. One participant received loperamide (2 mg), and two patients received hydroxyzine (10 - 50 mg) and ibuprofen (100 - 800 mg). The baseline was the first day of withdrawal symptoms appearance.

The Clinical Opiate Withdrawal Scale (COWS), a clinician-administered scale with 11 items, was used to assess the patient's level of opiate withdrawal in both inpatient and outpatient settings. This scale can be used to monitor withdrawal symptoms over time (22). The COWS has shown its clinical usefulness in opioid withdrawal management studies among both adult (23, 24) and adolescent (25) patients in Iran.

Data analysis was done by the IBM SPSS software, version 22 (IBM Corp). The Mann-Whitney U test and Chi-square test were used to compare the demographic data. The statistical analysis of data was done with nonparametric tests, including Fisher's exact test to compare the effectiveness of clonidine and buprenorphine. The post hoc analysis with Wilcoxon signed-rank test and Bonferroni correction was applied. The Kruskal Wallis H test was employed to compare the efficacy of two treatments. All graphs were drawn by GraphPad Prism 8.

Table 1. Sociodemographic Characteristics, Drug Use, and Drug Treatment History of Participants (N=36) a 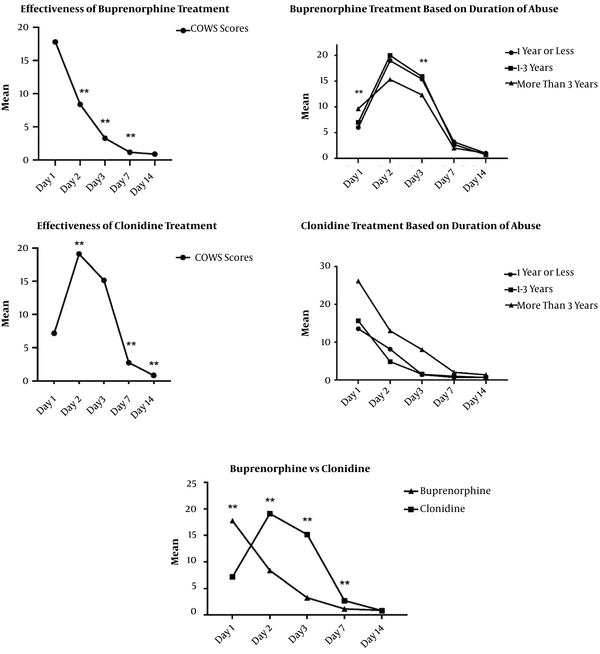 Buprenorphines treatment is superior to clonidine in the first seven days of detoxification. However, it loses its superiority towards the end of the follow-up. There was no significant difference between the effectiveness of both treatments based on the duration of abuse ** P < 0.01.

4.4. Comparing the Effectiveness of Clonidine and Buprenorphine Opioid Withdrawal Treatments

aValues are expressed as mean± SD.

Various medications have been used for the treatment of adolescents with different psychiatric disorders. In contrast, medications have been infrequently used for treating substance use disorders among adolescents. Because of the nature and pharmacologic properties of opiate drugs, adolescents who are physically dependent on opioids will experience a severe physical withdrawal syndrome if they abruptly discontinue their opiate use, presenting a major obstacle to the treatment of opioid dependence (13).

This study compared the effectiveness of buprenorphine versus clonidine treatment for the detoxification of adolescences with opioid dependence. For this purpose, 36 adolescences between 12 to 16-years-old were assigned to two groups to receive either buprenorphine or clonidine. The COWS scores were monitored on days one, two, three, seven, and 14. The findings showed that both treatments were effective, but buprenorphine was superior to clonidine between days two to seven. However, after day seven, the COWS scores were comparable between both groups, and the subjects of both groups on day 14 were mostly withdrawal-free.

In conclusion, buprenorphine treatment was found to be more effective than clonidine in controlling opioid withdrawal. However, it lost its superiority towards the end of the follow-up. It seems that clonidine could be a good alternative to buprenorphine in detoxification. Given these findings, the debate on the superiority of treatments makes little sense. In the era of individualized medicine, there is no debate against having multiple evidence-based treatment options where individual planning can be tailored to patient risks and needs, instead of using only one of the treatments, it is better to develop a combination protocol of both methods. (31).

The current study has some limitations. As it was an inpatient study, the generalization of the findings to outpatient treatments must be with caution. This study focused on outcomes during detoxification, so the patients were not followed to examine the effect of the two treatments on maintenance or relapse of opioid addiction. It was an open-label study, and blinding was not done. The type of opioid use was not specified, although it is expected that the onset of withdrawal symptoms was earlier in injecting consumers than in oral consumers. Few patients in the clonidine group received other medicines (ibuprofen, loperamide, and ibuprofen), which can have affected the results.