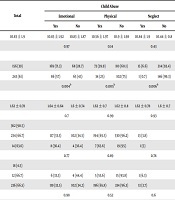 Child abuse is a significant health and social problem. Different social and family factors have effects on child abuse.

This study was carried out to determine the prevalence of child abuse in three domains of physical abuse, emotional abuse, and neglect among a sample of elementary school children in Iran.

Among the studied children, 73.8% declared at least one type of child abuse. It seems that the prevalence of neglect increased among school-aged children compared to previous studies from Iran. The low socioeconomic status of the family is significantly related to child abuse. Family physicians and school counselors play important roles in identifying and reporting child abuse and neglect. Therefore, they should be more involved in the prevention of child abuse.

Violence against children is a significant public health and social problem. Child abuse and maltreatment can be described as the parents or other caregivers’ failure to provide care and protection for children, resulting in harm, the potential for harm, or threat of harm to a child even if the harm is unintentional. Child abuse takes many forms (physical, sexual, emotional, and neglect) and occurs in many settings, including the home, school, community, care and justice systems, and the Internet. Beyond death, physical injury, and disability, violence can lead to stress, which impairs the child’s brain development and damages the nervous and immune systems. These harms are associated with delayed cognitive development, poor school performance, and dropout, mental health problems, suicidal attempts, increased health-risk behaviors, revictimization, and perpetration of violence (1-3).

In 2017, the World Health Organization (WHO) estimated that up to one billion minors in the age range of 2 - 17 years endured physical, emotional, or sexual violence (4, 5). In 2017, the United Nations Children’s Fund (UNICEF) reported that every seven minutes, an adolescent is killed by an act of violence. Around 300 million children aged 2 - 4 years are regularly subjected to violent discipline at home worldwide. Statistics show that nearly 15 million adolescent girls, age 15 - 19 years, have experienced forced sexual intercourse in their lifetime (4).

Several family-related factors have been shown to have significant effects on child abuse. Family socioeconomic status is one of these factors, which is determined by parental income, education, and employment (8). Parenting is considered to be strongly influenced by the family’s socioeconomic status (9). Generally, Iranian families have changed over the years, and the poverty rate has increased in Iran in the past decades. The percentage of children with unemployed parents has also risen in recent years (10). National reports conclude that in the 2016 - 2017 fiscal year, 14.9% of the urban population and 11.6% of the rural population were below the absolute poverty line in Iran (11). The cost of living has increased in the past years, and more and more Iranian families have fallen below the poverty line (12), resulting in increased social problems (13).

Poverty is an important factor in child maltreatment (14, 15).

Therefore, it is important to monitor child maltreatment trends and patterns to explore the possible effective factors. We performed the present study as the economic pressure on Iranian families has increased in recent years, causing a decline in their socioeconomic status, which is one of the factors affecting child abuse and neglect. Overall, the impact of these social conditions on the prevalence of child abuse must be determined to inform and improve policy and practice for better planning against child maltreatment in Iran.

This cross-sectional study was performed in 2018 on 400 school students (age 7 - 13 years), who were selected via multistage cluster sampling to assess all domains of child abuse, except for sexual abuse. According to previous studies in Iran, the pooled estimates of the prevalence of the three domains (emotional abuse, physical abuse, and neglect) of abuse in both genders were 43.591%, 64.533%, and 40.945% (7). Taking into account these prevalence rates and according to α = 0.05, P = 50%, and d = 0.05, the sample size was calculated as 384 participants, which was considered to be 400 participants in the present study.

The participants were selected through classified randomized sampling in each cluster among the students of elementary schools (grades 1 - 6) in rural areas of Shahroud, Semnan Province, Iran. Some explanations about the study were given to all the students in all clusters, and students who were not willing to participate in the study were excluded and replaced by others. It was not necessary to register the students’ names or characteristics, and the students were ensured that their information would remain confidential.

Demographic characteristics of children, their families, and the type of child abuse are presented in Table 1. Of 400 respondents aged 7 - 13 years (mean age = 10.83 years; SD = 1.9), 39% were boys. The frequency of child abuse was significantly higher in boys than in girls in all child abuse domains. Our findings showed that the prevalence rates of emotional abuse, physical abuse, and neglect were 63.8%, 27%, and 90.3%, respectively.

Table 1. Demographic Characteristics of Participants, Their Families, and Types of Child Abuse (N = 400)a

Table 3. Effect of Demographic Factors on the Dimensions of Child Abuse by Multiple Linear Regression

This study adds to the literature on the association between child abuse and family socioeconomic status among Iranians and provides an estimation of the prevalence of different subscales of child abuse among elementary school students in Shahroud, Iran. The results showed that a great proportion of the students (73.8%) had experienced at least one domain of child abuse. Neglect was recognized as the most common type of child abuse (90.3%). Inadequate food, clothing, shelter, and access to educational and health services for children have significant effects on their future and expose them to a greater risk of disease, infection, retardation, and even death. Moreover, low family socioeconomic status has significant effects on neglect.

Emotional abuse was also the second most common type of child abuse (63.8%). Emotional abuse, which can be either verbal or non-verbal, is inflicted by ignoring or dismissing a child’s emotional reactions or shaming and humiliating a child. It was found that Iranian parents do not take care of the psychological and emotional needs of their children, which can be even more problematic than physical abuse for children.

The literature suggests that the child’s gender has an impact on child abuse (17). Based on our findings, the number of abused boys was significantly higher than the number of abused girls, and as a result, the cycle of violence is more evident in males than females (18). Moreover, our results revealed that the mother’s employment status increased child neglect considerably. Although studies show that women’s increasing presence in professions increases the family income, mothers spend less time with their children, which has consequences, such as increased social damage to children (8, 19).

In the current study, father-related factors in child abuse were smoking and a low level of education. In this regard, Guterman et al. (20) reported that fathers’ college education or higher was significantly associated with a lower risk of physical child abuse. Our results support some previous studies, which showed no significant link between the father’s employment status and risk of child abuse (20). Our findings indicated that fathers’ university education is an important protective factor against physical child abuse. Various studies have noted that younger fathers have a particularly low annual income because of their relatively lower educational status, and they have relatively fewer job opportunities in comparison with older fathers (21). The existing literature has firmly established that socioeconomic status is a key predictor of child abuse (22). Also, we found that low family socioeconomic status was significantly related to emotional child abuse.

According to previous studies, parental smoking is strongly related to child abuse. First, children of parents who smoke are left unprotected against the harmful health effects of smoking cigarettes (22, 23). Second, parental smoking has a significant association with child abuse. Walsh et al. (24), in their study, showed that parental substance abuse was associated with more than a two-fold increase in the risk of exposure to both physical and sexual child abuse. Our results also showed a significant relationship between the father’s current smoking and emotional child abuse. Indeed, drug use or smoking of parents can reduce the parent-child relationship in the family. Therefore, one of the most effective ways to reduce the prevalence of child abuse is that programs focus on parenting education interventions and treatment of parental addiction and smoking. In this regard, Dawe and Harnett (25) found significant improvements in different domains of family functioning, such as reduction of child abuse and child behavior problems, via parenting education for families with a parent on methadone maintenance (25). Therefore, helping fathers to quit smoking can effectively prevent child abuse.

Cultural differences in different cities of Iran may have an impact on people’s attitudes towards child abuse. In this regard, Pirdehghan et al. (28), in a study conducted in Yazd Province, Iran, reported neglect (83.8%), psychological abuse (76.1%), physical abuse (36.1%), and sexual abuse (28.8%) in secondary school students. Moreover, Stephenson et al. (29) assessed child maltreatment among school children (11 - 18 years) in Kurdistan Province and found physical maltreatment in 38.5% and 43.3% of the students at home and school, respectively. Miri et al. (30) also investigated the prevalence of child abuse among high school students of Bam, Iran, and found that 20.02% of the students suffered from physical abuse, 24.59% from neglect, and 33.16% from emotional abuse.

The present study had some limitations. First, interviewing the elementary school-aged children was a limitation, particularly interviews with a seven-year-old child. To deal with this problem and collect the data as accurately as possible, a school counselor who was a psychologist helped our research team. The other limitations of this study were a lack of questions for sexual abuse and a small sample size. Future researchers are suggested to replicate the present study on children of addicted parents who are treated in methadone maintenance treatment (MMT) programs and compare them with other addicted parents.