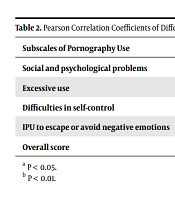 The spread of the Internet and the improvement of audio and video media have led to the emergence of an industry called pornography.

The purpose of this study was to investigate the relationship between the use of pornography and marital sexual satisfaction and attitudes toward marital infidelity in married women in Zahedan.

This was a descriptive correlational study. The statistical population consisted of all working married women and housewives in Zahedan during 2017. Among them, a sample of 190 people (95 housewives and 95 employed women) was selected through a convenience sampling method. To collect data, the problematic pornography use scale, the Sexual Satisfaction Questionnaire (women's form), and Whatley's attitudes toward marital infidelity scale were used. Data analysis was performed using Pearson correlation coefficient and stepwise regression.

It is necessary to consider appropriate strategies to reduce the use of pornography to promote marital sexual satisfaction and reduce the attitude towards marital infidelity in married women.

Also, research dictated that excessive pornography use can increase the possibility of infidelity as a factor affecting the failure of a couple’s relationship (12). According to Drigotas and Barta, infidelity, with regards to a dyadic relationship, is a breach of commitment by engaging in either physical or emotional intimacy with someone outside the current relationship (13). The prevalence of infidelity in women has increased by almost 40% over the past two decades; however, this rate (21%) has remained stable in men (14). Research has proven that pornography use is one of the strongest predictors of extradyadic sexual involvement (15, 16). Moreover, a study showed that pornography use in couples significantly increases the likelihood of divorce and extradyadic affairs (12, 17). The results of a study conducted on 531 Internet users indicated that watching pornographic images had significant and direct relationships with infidelity and unfaithfulness (18, 19). Research conducted in Iran has also demonstrated that pornography use is effective in increasing insensitivity to the spouse, distorting the perceptions of sexuality, and reducing the values associated with monogamy and marriage (11). Infidelity can affect marital satisfaction (because about 2 to 4% of spouses engage in sexual infidelity annually), and it occurs in 20 to 25% of all marriages (20). On the other hand, in Iranian research, little attention has been paid to the relationship between pornography and marital satisfaction; most of the studies have reported the negative effects of the Internet and satellite on couples’ lives (21, 22). Accordingly, it is necessary to research the relationship between pornography, marital satisfaction, and attitudes toward marital infidelity.

This study examined the role of pornography use in marital sexual satisfaction and attitudes toward marital infidelity among married women in Zahedan.

This descriptive study had a correlational-predictive design. Its statistical population consisted of married women who were either employees of governmental organizations or housewives in Zahedan in 2018. The sample size was determined by the Cochran formula with 0.07 (d), 1.96 (z), and 0.05 (p q). It included 190 women (95 housewives and 95 employees) selected by a convenience sampling method. Being married with the age of 25 to 50 years was the inclusion criterion.

The approval of the Ethics Committee of the University of Sistan and Baluchestan in Zahedan, Iran (IR.USB.REC.1399.009) was obtained. Before the study, explaining the main objectives of carrying out this study to the participants, obtaining the participants’ informed consent to take part in the study, giving them the freedom of choice to withdraw from the study at any stage that they saw fit, and ensuring them of the confidentiality of the obtained data and the anonymity of the individuals filling out the questionnaires.

Mostafavi developed this questionnaire. It has 36 five-option items. It is scored from four (completely agree) to zero (completely disagree). Some items are scored diversely. Using Cronbach’s alpha, the reliability of the Marital Sexual Satisfaction Questionnaire was 0.85 (25). In the present study, its Cronbach’s alpha coefficient was 0.87.

Whatley designed this scale in 2006. It has 12 items, each of which is scored based on a seven-point scale ranging from one (totally disagree) to seven (totally agree). The maximum score is 84, indicating the acceptance of infidelity, and the minimum score is 12, showing the rejection of infidelity. The cut-off point is 48. In a study conducted on 383 married and single men and women living in Ali Abad and Behshahr, the Cronbach’s alpha coefficient of this scale was 0.84 (26). In the current study, its Cronbach’s alpha coefficient was 0.81.

The Pearson correlation coefficient and the stepwise regression analysis were used to analyze the data.

Table 1. Descriptive Results of the Scores of Subscales of Pornography Use, Marital Sexual Satisfaction, and Attitude Toward Marital Infidelity Obtained by Housewives and Employed Women a, b

Table 2. Pearson Correlation Coefficients of Different Subscales of Pornography Use with Marital Sexual Satisfaction and Attitudes Toward Marital Infidelity

According to Table 4, social and psychological problems could explain 5% of the variance in the overall marital infidelity score. The subscale of social and psychological problems (Beta = 0.237 and Sig. = 0.001) was a positive predictor of marital infidelity. The other subscales did not have the criteria for entering the equation and were eliminated.

Table 4. Stepwise Regression Results of Overall Marital Infidelity Score Predicted via the Subscales of Pornography Use

In a survey of 1,500 adults in the United States, for example, Wright et al. (7) concluded that there was a diverse association between watching pornography and sexual satisfaction. Minarcik et al. (11) stated that pornography use significantly improved relationship satisfaction, commitment, and intimacy between couples. Examining a sample of married university students, Jafarzadeh Fadaki and Amani (9) also found that pornography use had inverse and significant correlations with levels of love and marital satisfaction.

The nature of pornography is to trigger sexual arousal in individuals. Pornography raises the viewer’s expectations by stimulating sexual feelings or thoughts. If the spouse is unable to satisfy the person at the level of arousal triggered by pornographic images, the sexual satisfaction will reduce (27). On the other hand, watching pornography allows the person to spend less time with his/her sexual and emotional partner in real life and leads the person to prefer watching pornographic images to getting sexual satisfaction from his/her spouse (28).

However, some research does not confirm the results of this research, such as Poulsen et al. (10) and Minarcik et al. (11). They suggested that pornography use significantly improves relationship satisfaction, commitment, and intimacy between couples. This result may be due to cultural and subcultural factors or because of differences in instrument and the method of research.

The findings also proved that pornography use and its subscales had direct relationships with attitudes toward marital infidelity. This finding is consistent with the results of Doran and Price (17), Maddox et al. (16), Gwinn et al. (12), Stack et al. (18), and Idr and Mardani (19). As an instance, Doran and Price (17) reported that adults who had seen a large number of pornographic movies in the past year before the study were more likely to get a divorce and had more extradyadic affairs. Idr and Mardani (19) concluded that there was a significant positive association between watching pornographic images and movies and extramarital relationships.

Limitations of the present study include using non-probability sampling, utilizing self-report questionnaires, and not studying the role of demographic variables and cultural and social factors; also, there was a possibility of the effect of the nature of the questionnaires on the participants' answers.

On the other hand, the sample was limited to married employed women and housewives in Zahedan, and it did not include married men. Additionally, a few studies have been conducted in Iran to examine the role of pornography in marital sexual satisfaction, especially marital infidelity. This negatively affected explaining the findings.

Therefore, conducting similar studies in other cities with a larger sample size, including married men, and examining the role of demographic variables are highly recommended.