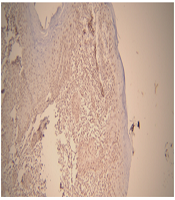 Squamous cell carcinoma (SCC) is the most common malignancy of the oral cavity with a highly aggressive nature. Verrucous carcinoma (VC) is a low-grade SCC with mild clinical and pathological characteristics. Extracellular matrix degradation (ECM) by several proteolytic enzymes, especially matrix metalloproteinases (MMPs), is an important factor in tumor growth, invasion, and metastasis.

The aim of this study was to evaluate the expression level of immunohistochemistry of MMPs 2 and 9 in SCC and VC of oral cavity.

The present study was conducted on the data of 20 SCC and 18 VC samples obtained from the pathology department archives. Microscopic examination was performed after immunohistochemical staining of the samples for MMP-2 and MMP-9. Data analysis was performed in SPSS 20 software. Kruskal-Wallis test was used to compare variables between groups.

Our findings showed that the expression levels of MMPs 2 and 9 in SCC and VC are higher than healthy tissue.

Oral cancers are the sixth most common cancer in the world. Squamous cell carcinoma (SCC) accounts for approximately 60% of oral malignancies (1) and 38% of all head and neck tumors (2). It begins with a precancerous process in which the foci of abnormal cells are selectively from the squamous epithelium. Precancerous to malignant transmission occurs before attack on connective tissue when tumor cells destroy the basal layer (BL) (3). Squamous cell carcinoma is graded based on the similarity of the malignant cell to the primary tissue and creatinine content (4). The prognosis of SCC is determined based on the clinical pathology staging system (TNM), anatomical status, and mitotic activity (1). Local invasion and widespread spread to the lymph nodes lead to an unfavorable prognosis of SCC (5). Due to significant differences in survival rates, biological markers are needed for a more accurate prognosis (1). In fact, accurate detection of biological markers helps to better identify tumor behavior and its metastatic potential (2). Verrucous carcinoma (VC), known as Ackerman’s tumor, is a rare form of low-grade SCC. It is the most common injury in the oral cavity with unknown etiology. However, there is speculation that the human papillomavirus (HPV), ultraviolet (UV) radiation, and chronic tobacco use may be the cause (6). In 1 - 10% of cases, VC is associated with SCC. Also, it is rarely associated with metastasis (4). VC is characterized by nuclear growth and local invasion without metastasis and may grow in surrounding tissues (6). Matrix metalloproteinases (MMPs) play an important role in tumor biology, including initial carcinogenesis caused by tumor growth to extracellular matrix (ECM) to degradation and invasion (7). Matrix metalloproteinases 2 and 9 can predict the potential for invasion and metastasis and determine the prognosis of the tumor (5). Matrix metalloproteinases are a family of zinc-dependent proteinases that are secreted in the form of proenzymes and require proteolytic enzymes to be activated (1). Matrix metalloproteinases 2 and 9 are the largest members of the enzyme family, consisting of five groups. These enzymes are encoded by two separate genes (1). Matrix metalloproteinase-9 is physiologically active in polymorphonuclear leukocytes (PMNs) and helps heal wounds and inflammation (8). Matrix metalloproteinases 2 and 9 are known as collagenase IV, which can also destroy gelatin and collagen IV, V, VII, IX, X (7). In the early 1980s, it was discovered that degradation of type IV collagen of the basal layer was critical for melanoma invasion (9). Matrix metalloproteinases 9 and 2 have been considered in studies due to their roles in the development of dysplasia to malignancy (1). They can be used as markers to detect SCC, VC. Matrix metalloproteinase-9 stimulates the secretion of factors such as transforming growth factor-β and vascular endothelial growth factor, which leads to tumor spread and angiogenesis (8). Expressions of MMPs 2 and 9 are indicators in determining prognosis and survival (7). This paper uses immunohistochemistry, which allows direct evaluation of morphological data and can be applied to sections of paraffin tissue commonly used in diagnosis (9).

The aim of this study was to evaluate the immunohistochemistry of MMPs 2 and 9 in oral SCC (OSCC) and VC.

In this study, 38 medical records of 20 patients with OSCC and 18 patients with VC were collected from the archives of the pathology department. Participants were selected from patients who had not received any medical intervention before surgery. Only medical records containing paraffin blocks were selected and re-examined by a pathologist. Once approved, the appropriate location for the IHC was determined on the slides. These blocks had the largest and most suitable tissue volume for immunohistochemistry. Positive control samples, including placental tissue blocks for MMP-9 and normal labial mucosal blocks for MMP-2 were prepared.

After re-examination of the specimens by a pathologist and marking of appropriate sites for the expression of MMP-9 (NeoMarkers, California, USA) and MMP-2 (Novocastra, Newcastle, UK), two 3-μm thick sections of each paraffin block was prepared. First, paraffin blocks with a thickness of 3 μm were kept at room temperature for 24 hours. Then, they were deparaffinized in xylene to perform the staining steps according to the manufacturer’s instructions: For antigen retrieval, the blocks were first incubated in citrate solution for 35 minutes in the microwave. They were then washed with distilled water and placed in a humid environment. Next, they were lacated in solutions containing peroxidase, MMPs 2 and 9 antibodies, link, streptavidin, chromogen, and hematoxylin. Between each stage, the samples were placed in pure alcohol for five minutes and then mounted by Entellan. The stained slides were examined with an optical microscope at 400X magnification. To ensure staining accuracy, positive control samples, including placental tissue blocks for MMP-9 and normal labial mucosa blocks for MMP-2 were also prepared.

Data analysis was performed in SPSS 20 software. Kruskal-Wallis test was used to analyze the relationship between variables. P < 0.05 was considered as a significant level in the whole study.

Table 1. Correlation Between Matrix Metalloproteinases -9 Expression and Lesion Type a 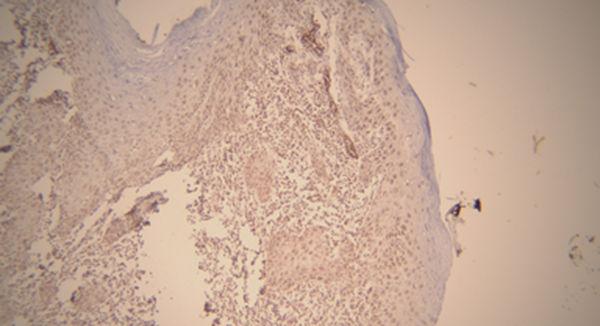 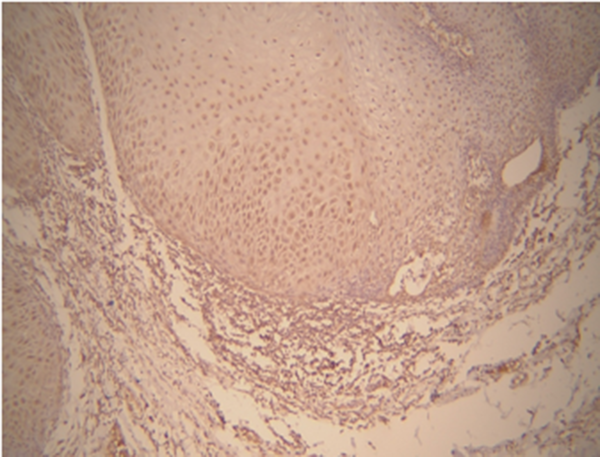 Table 2. Correlation Between Matrix Metalloproteinase-9 Expression and Histopathological Grade of the Lesion a

Based on the results of Kruskal-Wallis test, there is a relationship between different grades and levels of expression. However, according to the number and mean scores of each group, SCC grade III and I were more correlated with MMP-2 expression level than the other group. Based on the results of Mann-Whitney test and the mean scores of the two groups, the expression level of MMP-2 in the VC group was higher than the SCC group (Table 3, 4) (Figure 3, 4).

Table 3. Correlation Between Matrix Metalloproteinase-2 Expression and Lesion Type a

Table 4. Relationship Between Matrix Metalloproteinase-2 Expression and the Histopathologic Grade of the Lesion a 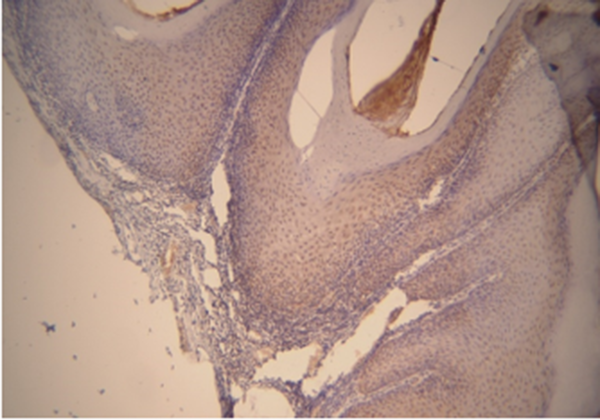 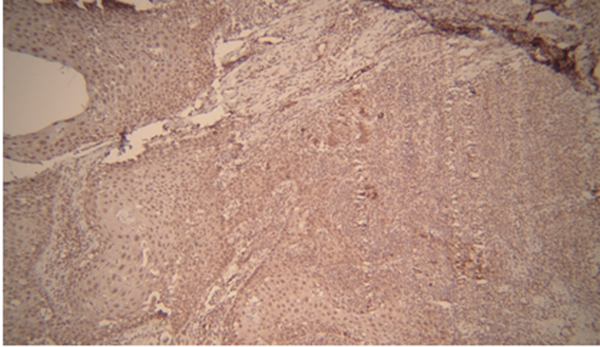 Copyright © 2022, Author(s). This is an open-access article distributed under the terms of the Creative Commons Attribution-NonCommercial 4.0 International License (http://creativecommons.org/licenses/by-nc/4.0/) which permits copy and redistribute the material just in noncommercial usages, provided the original work is properly cited.
download pdf 17.43 MB Get Permission (article level) Import into EndNote Import into BibTex
Number of Comments: 0