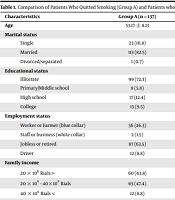 Despite the health benefits of smoking cessation on patients with cardiovascular diseases (CVDs), some resume smoking even after their discharge from hospital with acute coronary syndrome (ACS).

This study aimed to determine the predictors of smoking resumption after ACS in western Iran.

This prospective cohort study was performed on 175 patients admitted to the Imam Ali Cardiovascular Center, Kermanshah, Iran, with a diagnosis of ACS from January 2018 to December 2018. Data were collected by a trained interviewer using a checklist developed based on the study objectives. Differences between groups were evaluated by independent t-test, chi-square, and Fisher’s exact tests. The relationship between smoking resumption and predicting variables was assessed using univariate and multivariate logistic regression models (Forward LR).

Divorce, having smokers in household, and history of depression were identified as the independent predictors of smoking resumption in ACS patients. Those who have these characteristics should be viewed as having a high risk of smoking relapse and be provided with more support to quit smoking.

Cardiovascular diseases (CVDs) are well recognized as a leading cause of death and disability worldwide. Annually, CVDs are responsible for 17.3% of the deaths across the globe (1). Acute coronary syndromes (ACS), comprised of ST-segment elevation myocardial infarction (STEMI), non-STEMI, and unstable angina, is one of the most deadly types of CVDs, accounting for more than 8 million medical visits annually (2).

Although most people quit smoking during their hospitalization for ACS, many of them resume smoking within a short time. Despite strict recommendations from physicians, some continue to smoke even after their discharge from hospital (8, 9). It shows that there are many personal, epidemiological, psychosocial, and clinical factors that affect patients’ attempts to quit smoking.

This study aimed to determine the predictors of smoking resumption after ACS in western Iran.

The present study included 175 patients because a similar study reported the smoking resumption rate as 51% (10). Hence, considering a confidence level of 95% and a marginal error of 5%, the sample size was calculated as 164. Moreover, according to a Cochrane table for defining sample size, the minimum was 169. Also, we considered a possible 10-15% non-response rate. Furthermore, a convenience sampling method was used to choose the participants. We assessed all ACS patients referred to the hospital between January 1 and December 30, 2018.

Inclusion criteria were definitive diagnosis of ACS and smoking at least five cigarettes per day. Patients were excluded from the study if they lived in Kermanshah city for less than six months, and/or did not formally accept to participate, and/or were discharged to any non-home setting, and/or had significant mental disorders, and/or had not a home telephone, and/or aged over 75 years of old.

All participants signed a consent form and were interviewed individually by a trained interviewer using a checklist according to the study goals. The questionnaire comprised of socio-demographic information (age, gender, educational status, marital status, and work status), economic characteristics (family income and house ownership), smokers in household, history of depression, and tobacco use. The validity of the checklist was evaluated and approved by two cardiologists and a psychologist through obtaining experts’ opinions. The reliability of the questionnaire was also measured using Cronbach's alpha coefficient (0.81).

Smoking status at the time of hospitalization was approved according to the paper and electronic medical records and in-hospital interviews with patients or their families and caregivers. The interviewer asked: ‘Have you ever smoked cigarettes?’ If the answer was ‘yes’, they were asked the following three questions: ‘Do you smoke cigarettes every day or some days?’, ‘Averagely, how many cigarettes do you smoke per day?’, and ‘When do you smoke cigarettes regularly?’ Patients who reported smoking cessation were asked when they had stopped it. Hence, the research team could determine who was still a smoker at the time of hospitalization. These patients were considered smokers.

After their discharge from the hospital, the patients were referred to a smoking cessation clinic and a psychologist for further support and counseling to break their cigarettes dependency.

Interview information was obtained from patients shortly after hospital discharge (baseline) and three months post-discharge via telephone calls. Telephone calls lasted about 20 - 30 minutes and were leaded by a research assistant working in the Kermanshah Cardiovascular Research Center, who was well trained regarding interview with patient and data gathering.

In the baseline interview, which was performed one week after discharge, the patients answered questions regarding socio-demographic information and tobacco use.

In the 3‐month interview, patients reported smoking status and frequency. The interviewer asked: ‘Has your tobacco use changed in the past three months?’, ‘Within the last three months, have you smoked cigarettes every day, some days, or never?’, ‘How many cigarettes did you smoke per day?’ If the patients reported that they stopped smoking, they were asked: ‘When did you stop smoking?’ and ‘Has anyone smoked cigarettes inside your home?’

The statistical package for social sciences (SPSS-23) software was used for statistical analysis. Quantitative variables (e.g., BMI or age) were described using mean (standard deviation (11)) and categorical expressed as frequencies (percentages). Differences between groups were tested by independent t-test for continuous and normally distributed variables and chi-square or Fisher’s exact tests for categorical variables. The univariate logistic regression analysis was conducted for all independent variables, whereby three univariate signiﬁcant predictors were then selected for multiple regression. Odds ratios (ORs) and 95% confidence intervals (CIs) were computed for variables. In the univariate model, age ≥ 40 years old, divorced/separated, illiterate, jobless or retired, family income < 20 × 105 T, housing status (rent), smokers in household, intensity of smoking (heavy), and history of depression were used as independent variables, whereas smoking resumption was assumed as the dependent variable. To evaluate the fit for multivariate regression, the Hosmer-Lemeshow goodness of fit test was used. All the analyses were considered statistically significant at P < 0.05.

The Institutional Ethical Board at Deputy of Research of the Kermanshah University of Medical Sciences (KUMS) approved and monitored the study protocol (KUMS.REC.1395.579). Furthermore, all participants were given a participant information statement and signed a written consent form. Individual personal information was kept confidential.

Table 2. Univariable and Multivariate (Forward LR) Analysis on Predictors of Smoking Resumption After ACS (All Patients) a

This study evaluated the predictors of smoking resumption in patients hospitalized for ACS in Imam Ali Cardiovascular Center, Kermanshah, western Iran. The results of our study showed that during follow-up (three months post-discharge), 21.7% of patients resumed regular smoking. Colivicchi et al. reported that 62.8% of patients in Italy resumed regular smoking at the end of one year after discharge from hospital with ACS (12). Attebring et al., in an observational study from Sweden found that 51% of patients with ACS were still smoking three months after discharge (13). As it is clear, the smoking cessation rate of 78.3% in the current study three months post-discharge was more favorable compared to the range of 31 - 60% reported in previous studies (13-15).

Our results demonstrated that age, family income, work status, education, and housing status were not correlated with smoking resumption, which is consistent with the results of some previous studies (16, 17). However, Hasdai et al. reported an association between young age and smoking resumption in patients who underwent coronary artery bypass grafting (11); also, Kim et al. reported that low education level was a significant predictor of smoking cessation (18). Similar conflicting findings have been reported by other researchers (12, 19, 20).

The results of this study illustrated that the history of depression was independently associated with the smoking resumption. In line with our findings, Vogiatzis et al. from Greece reported that patients with mental disorders, who were taking sedatives or antidepressants medications, did not quit smoking (16). In a study conducted by Mayou et al. on patients suffering from myocardial infarction, 41% of smokers with psychological disorders resumed smoking during the first three months after their discharge from hospital (21). Likewise, Perez et al. reported that depressed patients are approximately three times more likely than other patients to resume smoking (22). Attebring et al. found that using sedatives/antidepressants was an independent predictor of continued smoking (13). It is well known that CVDs often lead to psychological disorders, which are considerably related to a stronger nicotine dependency and smoking resumption. Therefore, patients with mental health problems often find it difficult to stop smoking. This finding suggests that patients with mental problems need more support to stop smoking.

Our study showed that divorce was an independent predictor of smoking resumption, and patients who were divorced/separated were more likely to resume smoking. There are few studies regarding the effects of marital status on smoking resumption. In accordance with our results, Chandola et al. illustrated that married patients were more likely to quit smoking (24). Trias-Llimos et al. found that there was a negative association between getting divorced and smoking cessation (25). Nystedt reported that marital status is significantly related to smoking behavior, observing low smoking risks among those who are married and high smoking risks among those with marital disruption (26). Stressful life events like divorce appear to have a greater deleterious effect on the ability to stop smoking. In particular, divorce and social exclusion are major risk factors for tobacco use.

Our study had several limitations. Self-reported data was used to evaluate the smoking resumption, and these data may be less accurate. However, it is found that self-reports of smoking resumption are accurate in research studies (27). Likewise, patients may have incorrectly stated their smoking status due to recall bias. Furthermore, our data were derived from a single center; so, our participants might not be the representative of the whole ACS patients. Our study sample size was small, but it was appropriate for our primary aim of determining the predictors of smoking resumption in ACS patients. Since the present study included only male patients with ACS, these results may not be generalizable to other groups, for instance, pregnant women. Another possible limitation was the relatively short follow-up period.

The authors would like to thank the Clinical Research Development Center of Taleghani and Imam Ali Hospital, Kermanshah University of Medical Sciences, for their cooperation and assistance throughout the study process.

Copyright © 2021, Author(s). This is an open-access article distributed under the terms of the Creative Commons Attribution-NonCommercial 4.0 International License (http://creativecommons.org/licenses/by-nc/4.0/) which permits copy and redistribute the material just in noncommercial usages, provided the original work is properly cited.
download pdf 125.02 KB Get Permission (article level) Import into EndNote Import into BibTex
Number of Comments: 0