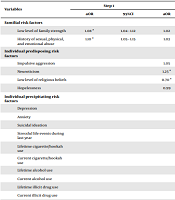 The present study aimed to explore the risk factors of suicide among patients admitted to hospitals due to suicide attempts.

The current use of cigarettes/hookah, lifetime non-prescribed medication use, suicidal ideation (suicidal thoughts/tendencies), and depression significantly predicted suicide attempts. In addition, lower levels of religious belief were significantly associated with a higher likelihood of attempting suicide.

Suicide prevention programs should explore the efficacy of treating individuals with substance abuse disorders, depression, and suicidal thoughts/tendencies for the reduction of suicide attempts. Furthermore, family, media, and school-based programs to internalize religious values would be valuable components of prevention programs for suicide in Iran.

Suicide is a significant public health issue in Iran. According to estimates by the WHO, the suicide rate among the Iranian population is 5.3 per 100,000; 3.6 for females and 7 for males (1). A national research study regarding the burden of diseases in Iran showed that disability-adjusted life years (DALY) due to suicide and self-harm behaviors was 206.2 per 100,000 population (2). The considerable number of Iranian individuals and families that are impacted by suicidal behavior and its related negative effects (1) reflects the necessity to identify the risk factors and precursors of attempting suicide.

Some longitudinal and cross-sectional studies examined the distal or predisposing risk factors of suicide. Studies consistently showed that having a history of suicide attempts in the first or second degree of relatives significantly increases the risk of suicide in individuals (3). Also, studies demonstrated that the transmission of suicidal behaviors among families is mediated by the transmission of personality traits such as impulsive aggression and neuroticism (4). Studies indicated that parental psychopathology, including depression, substance abuse, and anxiety disorders, extenuate the risk of suicidal behaviors throughout an individual’s lifetime (5). Exposure to sexual, physical, and emotional abuse during childhood is another well-established risk factor of suicidal behavior (6, 7).

Predisposing factors might play their role in suicidal behavior via personality traits and cognitive style (8). Impulsive aggression (9) and neuroticism (10) have been shown as important risk factors of suicide. Hopelessness is a crucial, cognitive vulnerability that significantly predicts the risk of suicide, and there is initial evidence on determining the role of hopelessness in the association of post-traumatic stress disorder (PTSD) and suicide attempts (11).

Psychiatric disorders, negative life events, and suicidal ideation are identified as precipitating risk factors of suicide. Having psychopathology is the key predictor of suicidal behaviors (9). Evidence suggests that 87.3% of individuals who die by suicide meet the criteria for a psychiatric disorder (12). Arsenault-Lapierre et al. (12) found that affective disorders, substance use disorders, schizophrenia, and other psychotic disorders were most frequent among suicide cases. The associations of negative life events (13) and perceived levels of stress (14) with suicidal ideation and behavior are well demonstrated. Finally, longitudinal studies have demonstrated that severe and pervasive suicidal thoughts exacerbate the risk of suicide attempts (8).

To our knowledge, in Iran, the majority of studies focused on the risk and protective factors of suicidal ideation, not attempting suicide (7, 14). Anisi et al. (14) explored the risk factors of suicidal ideation among Iranian soldiers. They found that higher levels of work-related stress, depression, and anxiety, being single, a history of smoking and substance use, family problems, history of attempted suicide, and a family history of suicide attempts were significantly associated with higher levels of suicidal ideation. In another study, Ziaei et al. (7) also reported that current smoking and substance use, being the victim of sexual abuse, and higher levels of anxiety were significantly associated with suicidal ideation among high school students. However, these studies explored the psychological risk factors of suicide thoughts in a sample of the non-clinical population (e.g., students and military individuals), and therefore, it is not plausible to generalize the findings of non-suicidal samples to patients who attempt suicide.

As far as we know, only one study explored the risk factors of attempted suicide among Iranian patients (15). Akbari et al. (15) indicated that recent stressful events, a low level of general health, lack of social support, and low levels of religious belief were significant predictors of a suicide attempt. However, they did not investigate the role of psychological variables in predicting a suicide attempt.

Considering the scarcity of information regarding the risk and protective factors of attempted suicide in Iranian patients, the present study aimed to explore the risk factors of suicide among patients who were hospitalized following a suicide attempt in Zanjan, Iran.

They included sex, marital status, age, and education and were measured via a questionnaire.

Lifetime and current substance use were measured via a questionnaire based on the American Drug and Alcohol Survey. This scale assesses the substance use throughout the lifetime, annual use, and usage in the past 30-day time frame. The content validity, test-retest, and internal consistency of the Persian version of the scale have been established (17).

We utilized the Beck Hopelessness Scale (BHS) (18). The BHS is a 20-item (“true = 1”, “false = 0”) self-reporting instrument that assesses hopelessness and pessimism about the future. In the Iranian sample, BHS showed good concurrent and discriminant validity, as well as internal consistency (19). In the current sample, the internal consistency of the BHS was 0.81.

In order to assess depression, the Zung Self-Rating Depression Scale (SDS) (20) was used. The SDS is a 20-item instrument with a four-point Likert-type scale (1 = “a little of the time” to 4 = “most of the time”) designed to measure depressive symptomatology. The Persian version of the SDS showed high test-retest reliability, acceptable internal consistency, and satisfactory factor structure (21). In the current sample, the internal consistency of the SDS was 0.90.

It was assessed by the Child Abuse Self-Report Scale (CASRC). The CASRC is a 38-item tool with a four-point Likert-type scale (0 = “never” to 3 = “always”) that measures family and parental abusive behaviors toward the individual during childhood. The scale demonstrated satisfactory construct and concurrent validity and test-retest reliability among the Iranian population (22). The internal consistency of the CASRC in the current sample was 0.88.

It was assessed by a hostility subscale (six items) of the Symptom Checklist-90-Revision (SCL-90-R). Responses to each item were on a five-point Likert scale ranging from (0) “not at all” to (4) “extremely”. The Persian version of SCL-90-R showed good internal consistency, test-retest reliability, and construct validity (23). The internal consistency of the hostility subscale was 0.89 in the current sample.

It was assessed by the emotionality or neuroticism subscale of the Eysenck Personality Questionnaire (EPQ) (24). The neuroticism subscale consists of 23 yes/no questions. Kaviani et al. showed that the Persian version of the EPQ has excellent test-retest reliability, internal consistency, and concurrent validity (25).

It was measured by four items of the depression subscale of the General Health Questionnaire-28 item (GHQ-28) (26). The internal consistency of these items was 0.96 in the current sample.

They were assessed using the Social Readjustment Rating Scale (SRRS) (27). The SRRS consists of 43 life events that are identified as stressful based on clinical experiences. The participants were asked to determine which of the stressful events they had experienced during the past year. The psychometric properties of SRRS were well established across various cultures (28).

It was assessed through the anxiety subscale of Depression, Anxiety, Stress scale-21 item (DASS-21) (29). Participants answer items using a 0 (did not apply to me at all) to 3 (apply to me very much) scale. The psychometric properties of DASS-21 were demonstrated among the Iranian population (30). In the current sample, the internal consistency of the anxiety subscale was 0.88.

In order to gather data from non-suicidal participants, the researchers recruited two psychologists as assessors and trained them concerning the purpose and processes of this study. The assessors selected non-suicidal participants among patients who were referred to the emergency centers of the hospitals for reasons other than attempting suicide. The assessors explained the purpose and procedure of the study to the participants. Those in a healthy physical and mental state and agreed to take part in the study were asked to complete the questions.

For the suicidal participants, the second author (K.Z.) recruited patients who were referred to emergency centers of the hospitals after an attempted suicide. The author (K.Z.) was informed by the head nurse of the emergency center that a suicidal patient was admitted. After stabilizing the patient, the author approached him/her and explained the purpose and procedure of the research. Those who agreed to participate in the study were asked to answer the questionnaire. Completing the battery of questionnaires took 35 to 45 minutes.

The study was carried out following the recommendations of the Ethical Guideline for Research on Human Individuals of the Ethical Review Board of Zanjan University of Medical Sciences (ZUMS.REC.1394/43), with written informed consent from all individuals following the Declaration of Helsinki. Data were analyzed by independent t-test, chi-square and hierarchical logistic regression.

Table 2. Prevalence of Lifetime and Current Substance Use Among Suicidal and Non-suicidal Participants a

Familial risk factors were entered in step 1 of the hierarchical logistic regression analysis. As shown in Table 3, familial risk factors accounted for 21% of the variance of suicide attempt (χ2 = 119.70, df = 2, P < 0.0001). Low levels of family strength [adjusted odds ratio (aOR) = 1.08] and history of sexual, physical, and emotional abuse (aOR = 1.10) were statistically significant factors, leading to suicide attempts in step 1. The model correctly classified 72% of the cases. A history of family discord did not predict suicide attempts and was excluded from the analysis.

Our findings showed that individuals who scored higher on depression and suicidal ideation, currently used either cigarettes or hookah, and had a history of non-prescribed medication use, were more likely to attempt suicide. In addition, lower levels of religious belief were significantly connected to suicide attempts.

Our findings showed people who currently used cigarettes/hookah were eight times more likely to attempt suicide than non-smokers. This finding is consistent with studies reporting a significant association between smoking and suicide attempts (31). These findings are also in line with neurobiological and genetic hypotheses about the crucial modifying role of tobacco and nicotine on central neurotransmitter systems (31). Smoking is associated with reduced monoamine oxidase A (MAO-A) and B activities leading to increased MAO-dependent neurotransmitter availability. Genetic variations of MAO-A are associated with impulse control (31). Also, the evidence demonstrated that low expression of the MAO-A gene variant was correlated with differences in limbic circuitry that is responsible for dysfunctional approaches of cognitive control and emotion regulation (32). This finding might imply that prevention and intervention programs for smoking have indirect effects on decreasing impulsive behaviors and suicide attempts.

The present findings also indicated that individuals who had a lifetime history of non-prescribed medication use were 2.5 times more likely to attempt suicide than non-users. The results are in line with Khantzian's self-medication theory, which declares people use a particular substance to decrease negative emotions or achieve emotional stability (33). This result might imply that suicidal patients significantly use more dysfunctional emotion regulation strategies. Therefore, preventive programs and interventions for suicide should concentrate on educating emotion regulation and problem-solving strategies.

The findings of the current research should be considered with its limitations in mind. First, the retrospective nature of the data hinders the inference of causal relationships between independent variables and suicide attempts. Thus, future longitudinal studies might further clarify the causal role of each risk and protective factor of suicide attempts among the Iranian population. Second, utilizing self-report instruments should also be considered another limitation.

In an overview, the findings from the current sample of suicidal Iranian patients are generally in line with the results of studies that investigated the psychological risk factors of suicide attempts in Europe and other Middle Eastern populations (35). This consistency across different cultures might imply that preventive programs and interventions for suicide developed for other cultures would apply to suicidal Iranians, albeit with some cultural adaptations. However, future research should concentrate on the cross-cultural clinical validity of those programs within the Iranian population.

Copyright © 2021, Author(s). This is an open-access article distributed under the terms of the Creative Commons Attribution-NonCommercial 4.0 International License (http://creativecommons.org/licenses/by-nc/4.0/) which permits copy and redistribute the material just in noncommercial usages, provided the original work is properly cited.
download pdf 119.22 KB Get Permission (article level) Import into EndNote Import into BibTex
Number of Comments: 0