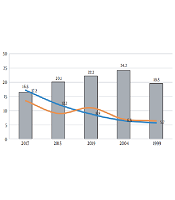 Basic Changes in the Sexual Life of Iranian University Students

We have witnessed some efforts to understand how premarital sexual relationship can affect marriage. It could be more problematic when we find that sexual activity is related to marriage (1, 2). It is true that Iranian society and the sexual life of people reflect the transformation of the norms and values of the Iranian families. Sexual life in Iranian society has changed due to social and cultural changes.

In this regard, recent studies showed that social system has shown different reactions to this change (3, 4). The decrease in the adolescence age, increasing impact of cyberspace, the spread of illegitimate children, and less monitoring and controlling of the families are among the challenges facing Iranian youth. A study illustrated that men want to have sex more than women (5). Finer (2007), in a study conducted in the US, found that not only premarital sex is typical all around the world by the age of 30, but also it is typical at younger ages. The existing literature in the past 50 years shows that young people prefer to experience sex before getting married, and they try to improve their abilities and knowledge to prevent pregnancy and sexually transmitted diseases once they become sexually active (6).

The main purpose of the current study was to estimate the trends of premarital sex among university students of Iran during 1999 - 2017. The method of this study was secondary analysis. Data collection tool was a questionnaire; the researchers asked some questions about the experiences of premarital sexual relationships and respondents’ attitudes of sexual relations out of marriage.

This study included single male and female students (age range: 18 - 35 years) studying at public universities in Iran. More than 71% of Iranian students study in metropolitan cities, including Tehran, Isfahan, Shiraz, Ahvaz, Tabriz, Mashhad, and Qom. To achieve this aim, the existing evidence in this field was used. In all the surveys, the statistical population included only single students. The total sample of this research was 6,300 students at state universities in metropolitan areas. All academic disciplines were included in the sample: (1) Javadi-Yeganeh (9); (2) Hashemi and Ghanbaribarzian (4); (3) Ghanbaribarzian (3); (4) Barghamdi and Mirzaei (10); (5) Ghanbaribarzian (11); (6) Ahmadabadi et al. (12), (7) Khalajabadi Farahani et al. (13, 14); (8) Hedayati-Moghaddam et al. (15). The attitudes of males and females towards the issue of sexual relationship is not the same. However, this is a continuous phenomenon which will make them involved during their lifetime. The results showed that while 30.3% of samples had friendly relationships with the opposite sex, 69.7% did not have relationship with their opposite sex (Figures 1 and 2).

According to the figures, the sexual intercourse behavior has changed among Iranian students. The affection and reproduction as important functions of sexual affairs in Iranian society have decreased. Due to the conservative cultural context of Iran, conducting research on this field is potentially difficult, and finding the way of facing with such information has some noticeable limitations. So, getting access to the real data by deep interview and qualitative methodological techniques could be more reliable. In addition, cultural differences should be considered and distinguished.

Copyright © 2021, Author(s). This is an open-access article distributed under the terms of the Creative Commons Attribution-NonCommercial 4.0 International License (http://creativecommons.org/licenses/by-nc/4.0/) which permits copy and redistribute the material just in noncommercial usages, provided the original work is properly cited.
download pdf 250.99 KB Get Permission (article level) Import into EndNote Import into BibTex
Number of Comments: 0