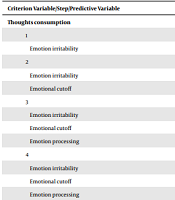 Craving has an important place in the structure of the literature on consumption disorders.

The statistical population of current descriptive-correlational research consisted of all opium-dependent patients living in medium-term accommodation centers (camps) in Zahedan, Iran, from 2018 to 2019. Among 21 allowed accommodation centers, 12 were randomly selected. A purposive sampling method was used to select 243 patients. For collecting data, multiple questionnaires were used. Pearson correlation coefficient test and stepwise multivariate regression were used for analyzing the data. Data were analyzed using SPSS-16 software.

Cultural factors play an important role in the expression of emotion, and it is important to consider them in the field of drug prevention. Concurrent attention is needed to be paid to the biological, psychological, and social dimensions. In addition, concurrent treatment can lead to interdisciplinary collaboration.

Opioids contain compounds that can interact with opioid receptors in the brain. Prolonged and unsupervised (abuse) use can lead to opioid dependence and other health problems (1). The opioid epidemic is a significant public health concern in the world. In recent years, the use of opioids with non-medical prescriptions has been increasing worldwide, which sets the stage for further risks (2).

Addiction is always closely related to human emotions, which helps to better understand the causes of abuse, maintenance, and relapse (3). Emotions, emotional states, and emotional-physiological responses are classics that are interpreted based on the history of the organism and the context (4). There is a connection between the opioid system of the brain and human emotions. Stimulation of approach-oriented emotions (anger and pleasure), avoidance-oriented emotions (fear and sadness), social bonding, and dependency behavior are influenced by the opioid system of the brain (5).

Emotions are influential in many important concepts in substance abuse research, such as trait anxiety, inhibition, reaction to environmental cues, cognitive regulation, mood, and behavioral motivation (6). Negative emotions trigger addictive behavior. Negative emotions such as sadness, anxiety, and negative mood increase the use of addictive substances and, in case of sadness, can inadvertently increase cravings (7). Emotion regulation, as an emotional component, predicts addictive behaviors such as alcohol and drug use, gambling, video game addiction, and problematic Internet use and is useful for preventive and curative interventions (8). Uncontrolled anger is also a stimulus for re-use and relapse among opioid-dependent patients (9, 10).

Drug addicts suffer from rejection of emotional responses, difficulty performing purposeful behaviors, difficulty controlling impulses, limited access to emotion regulation strategies, and lack of emotional clarity, and this provides the basis for continued use (11). Emotional factors are actually risk factors for drug use, and chronic drug use can lead to more emotional disorders with an effect on the reward system, motivation, and stress. On the other hand, perturbations in these systems lead to emotional processing of drug-related symptoms in exchange for natural rewards that maintain addictive behavior by increasing cravings (12).

Considering the importance of emotions in relapse and craving, this study investigated the specific and common role of emotional factors with craving and its thoughts and fantasies in opioid dependent patients in Zahedan, Iran.

The design of present study is descriptive-correlational, and the research variables are measured Concurrently. The statistical population of the study included all opioid dependents in Zahedan living in medium-term accommodation centers (camps) in 2018. All subjects were male with an age range of 20 - 44 years. Sampling was done in several stages. First, sampling was done randomly. Thus, at first, the residential centers licensed by the Welfare Organization of Sistan and Baluchestan Province (Zahedan city) were identified by referring to the welfare office in the city. A total of 12 accommodation centers were selected from 21 accommodation centers. Then, purposeful sampling was performed, so that by referring to the patients’ records in the accommodation center and the type of drugs used and the criteria for entering and leaving the research, the sample was determined. Finally, out of 700 opium-dependent patients in 21 accommodation centers, 243 samples were identified according to Morgan and Freeman’s table.

Inclusion criteria were diagnosis of opioid addiction, male gender, age range of 20 - 44 years, and being literate (read and write). Exclusion criteria were concomitant use of methadone maintenance therapy, diagnosis of other substance use disorders, having physical pain, history of hospitalization in a psychiatric hospital, schizophrenia, and receiving antipsychotic drugs, and unwillingness to participate in the research.

This 14-item questionnaire assesses the current craving (13) and is scored by a seven-point Likert scale. Internal consistency for the three test subscales calculated by Cronbach’s alpha is 0.81, 0.84, and 0.79, respectively (13). The total Cronbach’s alpha value for Iranian opium users was 0.96. (14).

3.2. Measuring the Craving to Use Drugs

This questionnaire was developed (15) in Iran and contains 20 items that measure the amount of thoughts and fantasies about substances and temptations that are experienced after withdrawal. The internal consistency of the questionnaire was obtained in terms of Cronbach's alpha (0.94) (15).

3.5. The Positive and Negative Emotion Scale

3.8. The Scale of Emotional Arousability

This scale was developed by Britoit in 1987 (24). This scale is rated on a Likert scale from 1 to 5. The reliability calculated by Cronbach’s alpha for all components was 0.83 (24).

In the study by Skowron and Schmitt (25), the reliability of the revised form with Cronbach’s alpha for the whole scale was 0.92, and the homogeneity coefficient for the emotional response subscale was 0.89.

Statistical analysis was performed at both descriptive and inferential levels. Statistical indicators such as mean, standard deviation, frequency, etc. were used to evaluate descriptive data, and Pearson correlation coefficient test and stepwise multivariate regression were used for inferential data.

According to Table 1, there was a direct relationship between emotional factors and current cravings in opioid-dependent patients.

a Significant correlation at the level of 0.05.

a Significant correlation at the level of 0.01.

According to the results of Table 3, emotional irritability could only predict 0.020 of the changes related to current consumption cravings, and other emotional factors did not have such explanatory power and did not enter the equation.

Table 3. Regression Analysis of Emotional Factors in Relation to Current Craving for Use in Opioid-Dependent Patients a

Stepwise regression was also used to investigate the predictive role of emotional factors in the thoughts and fantasies of opioid-dependent patients.

Regression analysis of emotional factors in relation to opioid consumption thoughts have been presented in Table 4.

Craving has always been influenced by several factors (29). Etiology of cravings also emphasizes various other factors such as interpersonal, behavioral, psychological, and bio-genetic factors (16).

In addition to these factors, we can mention the factors of mindfulness, cognition, behavior, and emotion in the discussion of craving (30). Therefore, emotion and related factors can explain only part of the variance, and other factors can play a role. This was one of the reasons that emotional factors had less predictive power in the present study. Substance abuse and addiction is a complex disorder associated with biological, psychological, social, and spiritual causes. The complexity of biological, psychological, social, economic, political, and cultural factors has made this problem one of the most complex individual, family, and social problems (31). People with addiction have difficulty expressing their emotions due to their inability to properly recognize the emotions on the faces of others and their limited capacity to empathize with the emotional states of others (32).

Negative emotion regulation strategies such as inability to control impulse, lack of emotional awareness, limited access to emotion regulation strategies, lack of emotional clarity, repression, and avoidance are significantly associated with increased consumption thoughts and fantasies (35). According to Koole (36), addicted people try to regulate their emotions with the aim of increasing pleasure and reducing suffering. Therefore, these patients regulate their emotions by using drugs, trying to prevent suffering and fatigue caused by their negative emotions. In the emotional model of user craving and bowling (2014), craving is known as a state of excitement that regulates it as a type of emotion regulation that directly reduces substance use.

Another finding of the study is that there is a significant relationship between negative and positive emotions and consumption thoughts. Positive and negative emotions are often referred to as predictors, consequences, and a definite feature of craving (37). Negative emotion develops in the form of feelings of guilt and anxiety in people who are actively trying to control drug use (38). Positive emotion can also enhance drug-related images and be more effective with strong and negative hybrid effects (39). In fact, positive emotion, as a motivational-appetite stimulant, shares the common feature of the pleasurable elements of drug use, while at the same time leading to the activation or sensitivity of the brain’s reward nervous systems.

Finally, impairment of emotional processing is a predictor of current cravings and thoughts and fantasies of consumption in opioid-dependent patients. Defects in emotion processing are actually related to the extent and severity of dependence as defects in reassessment (12).

The present study showed that, in general, there is a significant relationship between emotional components and craving. Therefore, the findings emphasize that the study of emotional factors related to the tendency of people to addiction is of particular importance, and in the field of substance abuse prevention, educating people to improve emotion regulation can be helpful. Hence, simultaneous attention to biological, psychological, and social dimensions can be very effective in preventing substance abuse.

The present article was extracted from a doctoral dissertation at the University of Social Welfare and Rehabilitation Sciences in Tehran, Iran. The study was approved by the ethics committee of USWRS (IR.USWR.REC.1397.071).

Copyright © 2021, Author(s). This is an open-access article distributed under the terms of the Creative Commons Attribution-NonCommercial 4.0 International License (http://creativecommons.org/licenses/by-nc/4.0/) which permits copy and redistribute the material just in noncommercial usages, provided the original work is properly cited.
download pdf 125.18 KB Get Permission (article level) Import into EndNote Import into BibTex
Number of Comments: 0