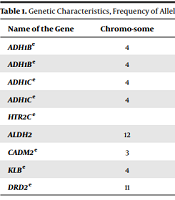 There is a category of people with a congenial predisposition to alcohol abuse among the total population. The identification of such persons by molecular genetic diagnostics and the implementation of appropriate preventive measures can significantly reduce the incidence of alcoholism.

This research aimed to study the genetic foundations of alcohol dependence development in Kazakhs based on the analysis of population frequencies of polymorphic variants of predisposition to alcoholism genes.

The material for the research was the DNA recovered from the peripheral blood of the recruited control group population, which was represented by 1,800 conditionally healthy individuals of Kazakh nationality. Isolated DNA samples were genotyped by PCR. The data was calculated and analyzed using HWEtest function of PLINK software.

The genetic factors play an important role at the basis of the formation of alcoholism and reflect the individual characteristics of neurotransmitter systems activity and enzymes of alcohol metabolism. According to the World Health Organization, alcohol abuse involves the deaths of 2.5 million people worldwide every year. By alcohol consumption, Kazakhstan is accounted for 34th out of 188 countries of the world (10.96 liters of alcohol per capita) and first place among countries of Central Asia (1-3). Due to the growth of the Kazakh population suffered by alcohol, genetic research based on this disease can have a special significance for the development of efficient methods of prevention and pathogenetic therapy (4, 5). However, the molecular genetic study of alcoholism has not previously been carried out in the Republic of Kazakhstan. Thus, identifying polymorphic variants in candidate genes that are the most significant in the development of this disease is an urgent challenge for fundamental science and practical medicine.

We investigate the genetic underpinnings of alcohol dependence development in Kazakhs based on population frequencies of polymorphic variations of propensity to alcoholism genes. These genes are selected from global Genome Wide Association Studies (GWAS) catalog based on the previous studies of researchers. We calculate and describe the allele frequencies of nine polymorphic variants of genes related to chronic alcoholism. The ADH1B gene (Alcohol Dehydrogenase 1B (Class I), Beta Polypeptide, rs2066701 (Arg369Cys), and rs1789891 (Arg272Gln)) encodes a protein that is a member of the alcohol dehydrogenase family. These enzymes metabolize ethanol. The ADH1C gene (Alcohol Dehydrogenase 1C, rs1693425 (HaeIII site), and rs698 (Ile349Val)) encodes the γ-subunit of the ethanol-metabolizing enzyme. The ADH1B and ADH1C genes encode the primary ADH enzymes for alcohol metabolism in the liver. The aldehyde dehydrogenase (ALDH- rs671 (Glu504Lys)) superfamily belongs to the APDH gene, which is the primary enzyme responsible for ethanol metabolism in the liver. It encodes the aldehyde dehydrogenase-2 enzyme, which converts acetaldehyde to acetate during detoxification. Potential targets for genetic susceptibility in the pharmacodynamic actions of ethanol are serotonin 5-HT 2 receptors rs6318 (Cys23Ser), dopamine DRD2 receptors D2, rs1076560 (C > A), etc. Besides, KLB (β-Klotho Beta (rs11940694 (A > G)) is a transmembrane protein that combines with FGF receptors to form cell surface receptors for the hormones FGF19 and FGF21. One of the significant loci of predisposition to alcoholism is β-Klotho. Also, CADM2 (cell adhesion molecule 2, (rs9841829 (T > G)) is a brain-expressed gene encoding the cell adhesion molecule 2.

To determine the clinical and diagnostic significance of gene polymorphisms associated with alcoholism in the Kazakh population, a molecular genetic study of their frequency characteristics in the control population was carried out. The DNA samples from 1,800 conditionally healthy individuals of Kazakh nationality were isolated from peripheral blood using the Prepito DNA CytoPureKit and M-PVA magnetic particle separation technology on a Chemagic Prepitto (PerkinElmer) automatic analyzer. Genotyping of ADH1B (rs2066701, rs1789891), ADH1C (rs1693425, rs698), HTR2C (rs6318), ALDH2 (rs671), CADM2 (rs9841829), KLB (rs11940694), and DRD2 (rs1076560) was performed with Polymerase Chain Reaction (PCR). All the examined people were made aware of the aims of the project and signed an informed consent form to participate.

The conditionally healthy individuals as the control population were 1026 females and 774 males. The average age of the participants in the study at the time of the questionnaire and blood survey was 26.76 ± 1.61 years. The results of GWAS were analyzed using global databases including NCBI [http://www.ncbi.nlm.nih.gov], Ensembl [http://asia.ensembl.org/index.html], HapMap [http://hapmap.ncbi.nlm.nih.gov/index.html.en], and 1000 genomes [www.1000genomes.org]. Haploview application was used in the GWAS to analyze and visualize haplotypes and statistical genomics.

Table 1 illustrates the important SNP polymorphisms selected from the worldwide GWAS databases that influence the development of alcoholism, as well as the frequencies of minor alleles in the studied groups of Kazakhs. The lowest population frequency of the minor allele (0.013) was found for the polymorphism of the ALDH2 gene, while the highest frequency was 0.368 for the KLB carriership of allele C. For all investigated polymorphisms in the Kazakh population, the distribution of genotypes conformed to the Hardy-Weinberg equilibrium (P > 0.05).

Table 1. Genetic Characteristics, Frequency of Alleles and Genotypes of SNP Polymorphisms of Genes Associated with Alcoholism in the Kazakh Population

b The number of genotyped

d The number of identified genotypes

e Were not included in SNP polymorphisms of IlluminaOmni 2.5-8 Chip

The frequency of the unfavorable allele A of the ADH1B gene for the second rs1789891 polymorphism in the Kazakh groups was 13.1%, which did not differ significantly from the populations of Europe (14.7%) (P > 0.05), but was significantly lower than the previously published frequencies for the populations of South Asia, Latin America, Finland, and Great Britain (P < 0.05) (7).

For the second gene of the family of alcohol dehydrogenases ADH1C, the frequency of the minor Т allele by polymorphism (rs1693425) in the Kazakh population was 23.7%, which turned out to be significantly higher than a similar indicator of East Asian populations (7.6%), (P< 0.001), but was significantly lower than similar allelic frequencies of the previously studied populations of Europe, South Asia, Latin America, and Finland (P< 0.05).

The second polymorphism rs698 of the alcohol dehydrogenase 1C gene demonstrated the population frequency of the minor C allele in Kazakhs as 22.44%, which significantly exceeded a similar frequency in the populations of East Asia (7.6%) (P< 0.001), but was significantly lower than all previously studied in the project 1000 genomes of the world's populations (P < 0.05). The carriership frequency of the protective A allele of rs671 polymorphism of the ALDH2 gene in the Kazakh population was 1.31%, which turned out to be significantly higher than similar frequencies in the African and American populations (0.2% and 0.3%, respectively) (P < 0.001) (8). The obtained results coincide with the data that the minor allele of rs6318 polymorphism had a low frequency in Asian populations, China (3.3%), and Japan (5.7%).

In conclusion, the potential indicators of higher risk of alcoholism in Kazakhs are G alleles of polymorphic loci rs2066701 of the ADH1B gene and rs671 of the ALDH2 gene, with possible protective effects of the A allele of rs2066701 of ADH1B and rs671 of ALDH1B gene. At present, only a general population study has been conducted in the Kazakh population compared to the populations of the world. The study of gene polymorphisms in alcoholism patients in the Kazakh population is the next stage of our research.

Copyright © 2021, Author(s). This is an open-access article distributed under the terms of the Creative Commons Attribution-NonCommercial 4.0 International License (http://creativecommons.org/licenses/by-nc/4.0/) which permits copy and redistribute the material just in noncommercial usages, provided the original work is properly cited.
download pdf 132.46 KB Get Permission (article level) Import into EndNote Import into BibTex
Number of Comments: 0