Translation of the Extended Addictive Features Section of the Ottawa Self-injury Inventory Version 3.1 in German 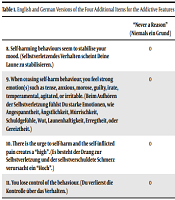 Recently, Plener et al. (1) have reviewed the literature on non-suicidal self-injury (self-harm) in adolescents, with a particular focus on the German context. In addition, some research on non-suicidal self-injury, conducted among German-speaking participants in Austria, Germany, and Switzerland (2-4), has operationalised self-harm using the German translation (2, 5) of the Ottawa Self-injury Inventory version 3.1 (OSI 3.1) (6, 7). Recently four newly developed items have been added to the Addictive Features section of the OSI 3.1 (8).

Table 1. English and German Versions of the Four Additional Items for the Addictive Features Section of the Ottawa Self-injury Inventory Version 3.1.

If this extended version of the OSI 3.1 is found to be reliable and valid this will enable self-harm research among German speakers, particularly on self-harm addiction.