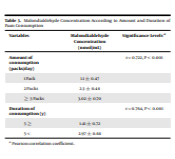 One known risk factor for oral cancer is chewing smokeless tobacco, which is common in southeastern Iran. Smokeless tobacco-related oral complications can be evaluated by assessing parameters of oxidative stress.

This study evaluated salivary malondialdehyde (MDA) levels in paan users and compared them with nonusers.

In this study, saliva was collected from 50 paan users and 50 nonusers referred to the Zahedan Dental School in Zahedan, Iran. Salivary MDA was assessed based on standard biochemical methods, and the data were analyzed using a t-test and analysis of variance.

One of the most common health problems in the province of Sistan and Baluchestan in southeastern Iran is the use of smokeless tobacco (SLT). One of the leading causes of this problem is the lack of knowledge about the side effects of this product (1).

Several types of SLT are consumed by chewing, sucking, or inhaling (1, 2). Various forms of SLT can contain a combination of areca nut, catechu, lime, tobacco, sweetener, and spice (3). Arecoline, an important alkaloid of areca nuts, stimulates collagen synthesis. Due to the increased pH, calcium hydroxide in lime increases the amount of free nicotine and its absorption into the oral mucosa. Catechu contains tannins that contribute to its flavor (4).

It is known that SLT products contain some carcinogenic compounds (4-6), including tobacco-specific nitrosamines (TSNAs), nitrite, nitrate, and heavy metals such as nickel-cadmium and chromium (2, 6). Raw SLT contains both Nicotiana tabacum and Nicotiana rustica tobacco, processed or unprocessed (4). The tobacco plant contains basic alkaloids such as nicotine, nornicotine, anabasine, and anatabine. As a result of the nitrification of these alkaloids, tobacco-specific nitrosamines (TSNAs) are produced during the processing of tobacco. The TSNAs including nitroso-nornicotine (NNN), 4-(methyl-nitrosamine)-1-(3-pyridyl)-1-butanone (NNK), nitrosoanatabine (NAT), and nitroso-anabasine (NAB) are carcinogens (7) and have been associated with cancers of the mouth, esophagus, and pancreas (8).

Studies have shown the association between the use of SLT and potentially malignant lesions of the mouth, cancer of the mouth (9), esophagus, and pancreas, and their possible role in cardiovascular disease, hypertension, gastric ulcer complications, and fetal mortality (6), diabetes and the exacerbation of asthma attacks (3).

The ingredients of betel-quid, such as areca nut and catechu, together with tobacco, produce significant amounts of reactive oxygen species (ROS) in the oral cavity, contributing to carcinogenesis.

A free radical, such as H2O2 ions, hydroxyl radicals, and superoxide anions, which are chemically highly reactive, can damage the lipids in the oral mucosa by activating lipid peroxidation (10).

Malondialdehyde (MDA) is a product of lipid peroxidation and a biomarker of oxidative stress (11-13), which plays an essential role in DNA damage, mutagenicity, and carcinogenesis (12, 13).

Compared to the control group, paan masala consumers had significantly higher levels of MDA in plasma, erythrocytes, and platelets and a decrease in enzyme antioxidant activity in these membranes (2).

Further, several have been conducted on precancerous and malignant lesions of the oral mucosa. In a study on erosive lichen planus, as a premalignant lesion, the total antioxidant capacity (TAC) was significantly lower in patients than in healthy individuals, whereas salivary MDA concentrations were higher in patients than in healthy individuals (14).

Similarly, a 2014 study found that salivary and serum MDA concentrations were higher in patients with oral cancer than in those with precancerous leukoplakia and controls, although there were no significant differences between tumors with moderate to good differentiation (15). In addition, a study conducted in Belgium in 2015 demonstrated that salivary 8-hydroxy-2 deoxyguanosine (8-OHdG) and MDA concentrations were elevated in patients with oral squamous cell carcinoma (OSCC) and other precancerous lesions such as oral lichen planus (OLP), oral submucous fibrosis, and oral leukoplakia, indicating lipid and DNA damage. Reduced vitamin C and E levels in patients with malignant and precancerous lesions are also indicative of their protective effects against oxidative stress (16). Due to the prevalence of smokeless tobacco use in southeastern Iran and the importance of oxidative stress as a precursor to malignancies, salivary MDA was examined as an indicator of lipid peroxidation in paan users and compared with controls. Consequently, a change in MDA concentration can be used as an indicator of oxidative to predict malignancies’ development.

One hundred participants were enrolled in this case-control study, including 50 paan users and 50 healthy individuals referred to the Department of Oral and Maxillofacial Diseases at the School of Dentistry at Zahedan University of Medical Sciences. The inclusion criteria for the case group were daily use of at least one pack of 10 g paan (1 pack/day) for at least one month. The paan products were placed in the buccal vestibule or on the floor of the mouth. Exclusion criteria were systemic diseases, periodontitis or lesions of the oral cavity, use of medication, use of other tobacco products including cigarettes and hookah, exposure to secondhand smoke, alcohol use, pregnancy or breastfeeding, postmenopausal women, and use of vitamins and antioxidants in the past three months (17-19). Control participants were selected from healthy individuals with no history of consuming paan or tobacco products. The exclusion criteria for the control group were the same as those for the case group. Case and control groups were matched based on sex and age. Before enrolling in this study, all participants signed a written informed consent form.

The saliva samples were collected by spitting. Before collecting saliva, participants were asked not to eat, drink, or brush their teeth for 90 minutes. The participants bent their heads forward and spit into the test tube for 15 minutes to collect non-stimulating saliva. The samples were collected between the hours of 9 am, and 11 am. The samples were immediately transported to the laboratory, centrifuged at 2000 rpm for 10 minutes to separate the debris from the samples. Saliva aqueous portion was transferred to microtubules and stored at -80°C until experimentation day (17).

Malondialdehyde is measured in saliva by the TBARS method, in which MDA reacts with thiobarbituric acid (TBA) at pH 2 - 3 and 90 - 100°C for 15 minutes. For this procedure, one sample unit was mixed with two units of 0.67% (w/v) TBA and 10% (w/v) trichloroacetic acid, and the mixture was placed in a boiling water bath for 30 minutes. After cooling, the samples were centrifuged at 3000 rpm for 15 minutes (17, 20, 21). A spectrophotometer (Biochrom Ltd., UK) measured a pink color (wavelength = 532 nm) resulting from the reaction of MDA with thiobarbituric acid. Chemicals were obtained from the Merck Group, Germany. Under the code (IR.ZAUMS.REC.1392.925), the Zahedan University of Medical Sciences Ethics Committee approved this study.

Table 1. Comparison of the Variables Between two Groups

In this study, salivary MDA concentrations were significantly higher in paan users than in control subjects. Additionally, there was a significant and direct relationship between the concentration of MDA and the duration of paan consumption. The salivary MDA concentration increased with increasing consumption of paan and duration of consumption. It is consistent with some studies (20, 21), in which the MDA concentration was found to increase in chewing tobacco users compared with the control group, and the amount and duration of consumption were directly and significantly associated with the concentration. In addition, Bagchi found that lipid peroxidation increased by 1.5 to 7.6 fold after normal oral mucosal keratinocytes were exposed to smokeless tobacco extract (22). In addition, a recent study reported a significant increase in MDA levels in the plasma, erythrocytes, and platelets, as well as a decrease in enzyme antioxidant activity in the erythrocytes and platelets of paan masala consumers compared to the control group (2).

A study conducted by Menicagli and Limodio examined salivary MDA, total salivary mucin (SM), and buccal smears of micronucleus (MN) in three groups of e-cigarette smokers with and without nicotine content as well as nonsmokers. Compared to the control group, e-cigarette smokers had significantly higher MDA concentrations (23). Despite this, there are some inconsistencies between the present study and other studies, including differences in the type of study, type of tobacco, amount and duration of use, age, MDA assay method, and sample evaluated (blood or saliva). This study examined some aspects of lipid peroxidation in paan users. Since salivary assessment is an easy and non-invasive method for screening certain diseases, especially in high-risk patients, salivary biomarkers may be helpful for early detection, appropriate treatment, and follow-up for cancer patients (24).

Carcinogens cause uncontrolled cell proliferation by adducting DNA and mutating K-ras, p53, and other genes. Furthermore, chronic inflammation, oxidative stress, and ROS formation contribute to cancer development. The activation of Akt and protein kinase A results in an increase in angiogenesis and a reduction in apoptosis, altering cell functions. Compounds found in SLT products, such as polycyclic aromatic hydrocarbons and areca nut, could also cause cancer. In addition to epigenetic mechanisms, SLT-related carcinogenesis can also be induced by promoter methylation of tumor suppressor genes, which results in abnormal cell proliferation (4, 6). The use of tobacco products over a long time causes increased oxidative stress and the formation of reactive oxygen species (ROS) due to the reaction with biological macromolecules (5, 16, 21, 25, 26).

In addition, the consumption of smokeless tobacco products increases the expression of induced nitric oxide synthase, which leads to an increase in free radical production, a decrease in the enzymatic antioxidant activity, and an increase in apoptosis. An essential function of nitric oxide synthase is to produce peroxynitrites, which initiate lipid peroxidation (2). Furthermore, nicotine and tobacco-specific nitrosamines interfere with the antioxidant system, increase ROS levels, and contribute to cellular oxidative stress (2, 13).

A study has demonstrated that nicotine is less able to cause oxidative stress than ST, which contains the same amount of nicotine. Smokeless tobacco contains several carcinogenic compounds besides nicotine, such as tobacco-specific nitrosamines (TSNAS), which generate free radicals. As a result of free radicals, membrane phospholipids are peroxidized, fluidity is altered, permeability is increased, and the integrity of cell membranes is compromised (16).

Mutagenesis and carcinogenesis are caused by the destructive effects of free radicals on cell organelles. The relationship between oxidative stress and inflammatory diseases, as well as precancerous and malignant oral lesions, has been confirmed in a recent review study. There is an increase in free radicals in saliva and oral tissue and a reduction in the antioxidant defense activity (27), which confirms that oxidative stress plays a role in the pathogenesis of oral diseases. During metabolic reactions, saliva plays a vital role in fighting free radicals and increasing lipid peroxidation (26).

The short lifespan of free radicals makes direct assessment difficult, and therefore an indirect assessment of the final products of lipid peroxidation is used (16). Thus, the study of salivary lipid peroxidation, a readily available and safe sample, may provide an early assessment of adverse mucosal effects in paan users. A multistage process of carcinogenesis, from normal mucosa to precancerous lesions to eventual oral cancer, as well as changes in salivary components following pathological conditions such as precancerous lesions, indicate the importance of saliva in researching oral cancer (27).

According to the study by Metgud and Bajaj, there was a significant increase in salivary and serum MDA and a decrease in GSH among healthy individuals, patients with leukoplakia, and patients with OSCC. This supports the hypothesis that ROS metabolism in cancerous cells is altered. Such cells produce more ROS than normal cells, decreasing their antioxidant activity (15). Study results indicate that salivary lipid peroxidation end products, indicative of free radical formation and carcinogenesis risk, can be used as an early indicator of adverse mucosal effects in paan users.

We would like to express our appreciation for the financial support provided by the vice chancellor for research at Zahedan University of Medical Sciences. In this paper, the results are described as part of a dental student’s thesis (D.D.S.) thesis.

Copyright © 2022, Author(s). This is an open-access article distributed under the terms of the Creative Commons Attribution-NonCommercial 4.0 International License (http://creativecommons.org/licenses/by-nc/4.0/) which permits copy and redistribute the material just in noncommercial usages, provided the original work is properly cited.
download pdf 124.51 KB Get Permission (article level) Import into EndNote Import into BibTex
Number of Comments: 0