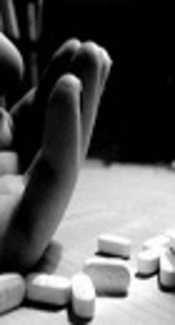 Fast Effect of Buprenorphine on Opioid-dependent Patients with Suicidal Ideation: A Novel Approach

Buprenorphine is usually administered to manage opioid use disorder and pain syndromes. It could be a proper treatment option for suicidality, resistant depression, self-destructive behavior, and anxiety. Buprenorphine has a considerable abuse potential that confines its administration in patients committing suicide with a background of substance abuse.

The current study aimed to clarify the influence of different doses of buprenorphine on opioid-dependent patients committing suicide over a 2-day period in a randomized, clinical trial (RCT).

Patients were randomly assigned into 3 groups. Twenty-three suicidal male patients who met the DSM-5 (diagnostic and statistical manual of mental disorders) criteria for opioid dependence and sought treatment were recruited. Patients randomly received 32, 64, or 96 mg of buprenorphine as a single high-dose only and were hospitalized in a psychiatric inpatient ward. Out of the 23 patients, 9 (39.2%), 8 (34.8%), and 6 (26%) received 32, 64, and 96 mg of buprenorphine, respectively. Psychometric assessment was performed using the Beck scale for suicidal ideation (BSSI) and interview. All patients completed the 2-day treatment period. The results indicated a significant decrease in BSSI scores in each of the 3 groups (P < 0.05), but there was no difference in the outcome between the groups (P = 0.30).

The current study results indicated that a single high-dose of buprenorphine could provide a speedy and safe means to treat suicidality in opioid-dependent patients.

In the world, suicide is a significant dilemma and requires an emergency intervention. For example in the US, suicide is the 10th leading cause of death and also a major public health issue (1). The majority of the studies on suicide are concentrated on risk factors and less concern is directed to advance novel treatments for patients committing suicide. Usually, patients who committed to suicidal are admitted to hospitals in order to prevent them from self-destructive behaviors and then, provide them consolation, and/or appropriate medications. It takes antidepressant drugs a couple of weeks; therefore, it is unlikely to control and treat the suicidal crisis right away (2). Ketamine (3), lithium, and clozapine (4), prefrontal repetitive transcranial magnetic stimulation (rTMS) (5), or electro convulsive therapy (ECT) (6) are suggested as acute treatments for suicidal ideation or commitment.

Streriebel et al. administered sublingual buprenorphine for speedy dissolution of suicidal idea in a client with treatment-resistant depression and severe opioid use disorder (7). Yovell et al. carried out a double-blind, controlled, clinical trial with ultra-low-dose buprenorphine for severe suicidal ideation and noted that the employed dose of buprenorphine resulted in a decline based on Beck suicide ideation scale (BSIS) scores after 2 weeks (8, 9).

Buprenorphine is administered as a partial agonist of opioid μ-receptors, a strong antagonist at κ-receptors, and δ-receptors, and a partial agonist of nociceptin receptors. The drug enforcement administration (DEA) specified buprenorphine as a schedule III drug (10), indicating that its abuse could direct to moderate or low physical dependence or high psychological dependence. Hence, the use of buprenorphine in patients committing to suicide with a background of substance abuse is challenging. In the past, authors reported a case of cannabis induced psychotic disorder and opioid depressive disorder with severe suicidal ideas treated successfully with single high dose (96 mg) of buprenorphine (11).

Although some reports illuminated diminish of depression, however, buprenorphine is not accepted by food and drug administration (FDA) or intended to treat depression. Buprenorphine itself is regarded as possibly addictive agent. Accordingly, it should not be usually prescribed for this issue. More investigations and clinical trials are necessary to illuminate this issue. Currently, authors are optimistic that researchers begin the foundation to treat depression in opioid-dependent patients (12-15).

Presently, only a single high-dose of sublingual buprenorphine is prescribed as an original inlet for the ultra-rapid treatment of suicide, since it is theorized and contemplated that the biochemistry involved in suicidal disorder is less or more similar to that of opioid dependence (in nearly both conditions the amount of endorphins and enkephalins is diminished) (12). Likewise, buprenorphine is an agonist of μ-receptor; therefore, it lowers the level of depression, suicide, pain, dysphoria, anxiety, and opioid withdrawal symptoms. In addition, buprenorphine is a strong κ-receptor antagonist; hence, it lessens the amount of suicidal tendencies, anxiety, and hostility (15-19).

To the authors’ best knowledge and understanding, published controlled trials on this important issue (administration of a single high-dose of buprenorphine for the treatment of suicide) could not be found. Consequently, the current RCT may disclose a novel finding.

The current study mainly aimed to investigate the single dose effect of 32, 64, or 96 mg buprenorphine to treat suicide ideation in opioid-dependent patients.

Subjects: Patients hospitalized consecutively in the psychiatric ward in Shiraz, Iran in 2016 were enrolled into the study; 23 opioid-dependent patients with suicide ideation looking for treatment were randomly selected in 2016 (confidentiality was fully discussed and written informed consent was taken from them).

Inclusion criteria: They had to meet the DSM-5 (diagnostic and statistical manual of mental disorders) criteria for both opioid dependence and major depressive disorder, as well as suicidal ideation according to the psychometric assessment using BSSI (20). Every day opioid use for at least 1 year was a requirement.

Exclusion criteria: Patients were excluded if they had substance use disorder other than opioids. Likewise, patients who were not interested in recruitment at the start of the clinical trial were excluded.

Sublingual buprenorphine (as a single dose only) was given slowly when the patients were moderately in withdrawal from opioids.

Only males were selected for the trial because only male patients are admitted to this main referral psychiatric ward.

Randomization: In a double-blind design, the subjects were randomly enrolled into 1 of the 3 treatment groups. A computer-based standard randomization procedure was applied to have a random sample set.

The current study was a randomized double blind trial. Both patients and research staff were blind to the study. Based on the proposal of the trial, the 3 different doses were prepared exactly similar to each other in the 3 groups. All the pills were the same color and shape; therefore, it was completely blind for patients, nurses, and raters.

Psychometric assessment based on BSSI was performed on the inpatients to monitor the level of suicidal ideation (20) before the progression of the opioids withdrawal symptoms.

Patients were monitored for 2 days. Outcome was rated by daily scoring of suicidal ideation according to the BSSI.

All 23 patients gained only a single high-dose of buprenorphine and completed the 2-day period trial. Therefore, the data were collected from 23 opioid-dependent males with the mean age of 34.22 ± 6.54 years.

Table 1. Demographic Characteristics of the Patients

Comparing the mean suicide scores among all groups, no significant differences was observed (P = 0.30).

Figure 1 represents the BSSI from the day 1 to the day 2 in all 3 groups. 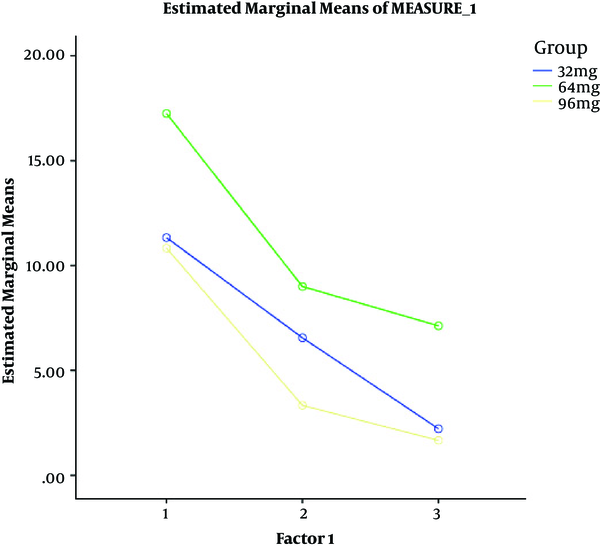 Sublingual buprenorphine (as a single dose only) was applied gradually and with low dosage in the beginning, while the patients with opioid use disorder were moderately in withdrawal from opioids. All medical precautionary measures, especially respiratory, and cardiovascular monitoring were thoroughly considered.

There were no significant drug adverse effects or drug intolerance in the patients. There was no report of rebound after this trial.

Buprenorphine as a partial μ-opioid agonist is regarded as a sensible approach, antidepressant medication on suicidal behavior in individuals with opioid use and mood disorder. A likely pharmacological reason for an antisuicidal and antidepressive effect of buprenorphine is that the medication is an agonist at the μ-opioid receptor and also a powerful antagonist at the κ-opioid receptor (9, 16, 21-39).

The κ-receptor and its ligand dynorphin seem to play a role in the progression of dependence disorders (38), in addition to the development of depression. Kappa antagonists have antisuicidal, antidepressive, and antianxiety properties. Studies revealed that activation of dynorphin was probably associated with negative emotional conditions, anxiety, and depression (38). Furthermore, in the rat model, administration of κ-opioid receptor agonists can induce depressive conditions (9).

Previous studies indicated the effects of buprenorphine in the reduction of suicidality and depression (40-42).

The current study results showed a significant decline in suicide scores in each of the 3 groups, but there was no difference in the results between the groups.

Single high-dose of buprenorphine is a drug with innovative-mechanism of action that provides a fast treatment for suicide in patients with opioid dependence.

Copyright © 2018, International Journal of High Risk Behaviors and Addiction. This is an open-access article distributed under the terms of the Creative Commons Attribution-NonCommercial 4.0 International License (http://creativecommons.org/licenses/by-nc/4.0/) which permits copy and redistribute the material just in noncommercial usages, provided the original work is properly cited
download pdf 176.66 KB Abstract XML Get Permission (article level) Import into EndNote Import into BibTex
Number of Comments: 0