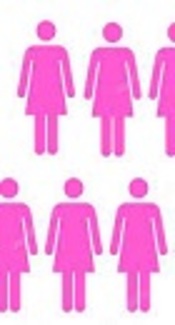 The current study aimed to evaluate the population of FSWs in Hamadan, west of Iran.

Minimum required data was extracted from 3 registry centers of (a) woman volunteer counseling and Testing Centers (WVCTCs); (b) welfare office drop in Centers (DICw); and (c) health deputy drop in centers (DICh) in Hamadan. The current study estimated the number of FSWs not identified by any of the 3 centers by log-linear model, and hence, the total FSWs population (N). The Akaike Information Criterion (AIC) and the Bayesian Information Criterion (BIC) were used as model selection and goodness of fit criteria.

Based on the case registry system until 21 September, 2013, the number of identified HIV+ cases in Iran was 27041 people comprised of 89.3% male and 10.7% female (1). Notwithstanding, injecting drug use is the most important cause of HIV infection in Iran (2). There is evidence in the recent years supporting the growing role of sexual route in transmission of HIV infection in Iran. Studies showed that the prevalence of HIV was about 4.5% among female sex workers (FSWs) in Iran (3, 4). It was estimated that there were 80,000 active FSWs in Iran (5) out of which approximately 1100 could be infected with HIV by 2014 (2).

Estimating the size of FSWs and surveillance of HIV infection among FSWs is necessary to monitor HIV epidemic and to provide data needed to plan, evaluate, and implement preventative and care programs targeted at sex workers (6). However, FSWs are a highly marginalized subgroup and their social stigma is a barrier for the use of health care and treatment (7). Accordingly, knowing the population of this group is remained the main challenge.

Census and enumeration are usually considered as gold standard direct methods to estimate the levels of any behavior in a population. However, these methods are inefficient under some conditions such as measuring the prevalence of rare, more covert and stigmatized circumstances, and there are multiple opportunities for bias in such situations (8). Therefore, numbers of indirect methods such as multiplier and capture-recapture methods were developed to estimate the size of hidden populations. The indirect estimation methods were employed to estimate the prevalence of FSWs by analyzing the observed data set, or combining it with other information to estimate the total target population sampled within the observed data set (8, 9).

Due to the lack of accurate estimation of FSWs population in Hamadan, Iran, and feasibility of the capture-recapture technique.

The current study aimed to evaluate the number of FSWs in Hamadan, Western Iran.

The current study was approved by the human subject review board of Hamadan University of Medical Sciences and in this study used the capture-recapture indirect method to statistically estimate the number of FSWs not identified by these registries and finally estimating the overall size of this population.

Hamadan is the center of Hamadan province in the West of Iran; it has a population of approximately 473149 people (census data 2006) (10).

Sex work is defined as “provision of sexual services in exchange for money, goods, or other benefits in the last 12 months” (6). Minimum required data was extracted from 3 registry centers of (a) Woman Volunteer Counseling and Testing Centers (WVCTCs); (b) welfare office Drop In Centers (DICw); and (c) health deputy Drop In Centers (DICh) in Hamadan. In this study, 169 FSWs were registered in WVCTCs, 76 in DICw and 164 FSWs were registered in DICh. After removing duplicates finally 349 FSWs entered to the study. WVCTCs provide midwifery services and evaluation of sexually transmitted diseases based on syndrome approach, educational programs and psychological counseling, HIV counseling and testing, male and female condoms, needle and syringe distribution, social services and vocational training for FSWs and injecting drug users (IDUs). DICs provide primary support for these groups such as serving food, underclothes, temporary accommodation, and educational programs. Each FSW may be registered in 1, 2, or all the 3 lists.

Besides, the list of FSWs was extracted and transferred into Microsoft Excel 2010 to find the first name, last name, age, and father’s name listed in more than one database using the sort techniques. To compare and find repeated persons, the existing information of individuals including first name, last name, age, marital status, and location was used. Unfortunately their national code was not available as the best identifying method.

Capture-recapture technique involves collection of 3 or more data sources to identify matches between the data sources. The current study used the 3 sources based on the capture-recapture method to estimate FSWs population using incomplete data sources of FSWs. According to these sources, following persons were registered in 8 subgroups (n = number of sources). It identified 7 groups and 1 group was uncertain (see models 1 to 8 below). According to the three sources, separate estimation was made for each of the eight possible capture-recapture log-linear models (11). Log-linear model incorporates the 3 sources of data and can explore dependence (technically, interactions) between sources and adjust for it by including interaction terms in the models as follows (12):

Dependency among sources was addressed using interaction terms. The basic assumption was that there was no interaction term for the saturated model (Model 8) (12). By accommodating the 3 sources of data, log-linear model can estimate the number of FSWs not identified by any of the 3 centers (X), hence, calculating the total FSWs population (N). The current study used the “Akaike information criterion” (AIC) and “Bayesian information criterion” (BIC) to select the model. The model with the smallest value of AIC or BIC was considered the best model.

Following assumptions should be held in capture-recapture technique: identification of all and only the true common cases, having stable population, that appear on a data source is independent of appearing on others and capture homogeneity (11). To reach these assumptions the study period and the geographic area were the same for all of the sources. To detect the link between the sources, a combination of identifiers was used for enrolled populations. The independence assumption was not crucial and the dependency between the sources can be assessed with interaction term between sources in the analysis stage. For homogeneity assumption, in fact the current study used a homogenous sample in a defined geographic location and also from 1 year.

FSWs population was estimated 842 individuals in the study population. Figure 1 shows the status of FSWs in the 3 sources under study using the Venn diagram. Generally, 376 FSWs were registered by the 3 sources. In total, 42.8% were identified by WVCTCs, 41.2% by DICh, and 15.9% by DICw. In addition, only 1.06% of them were identified by all the 3 sources. However, 7.2% of FSWs were shared between WVTCs and DICh. Sharing between WVCTCs and DICw was 3.2%, and between DICw and DICh was 3.5%. Distribution of FSWs Registered by the Three Centers, and their Overlap

Demographic characteristics of subjects based on the registry source are shown in Table 1. Most FSWs were divorced and aged 30 to 44 years. After exclusion of duplicates between the sources, 349 FSWs remained.

Table 1. Demographic Characteristics of FSWs Registered by the Three Centers

The results of log-linear analysis are shown in Table 2. Based on the smallest value of both AIC and BIC, the first model (ABC) was considered the best-fit model. According to this model, there might be 493 (95% confidence interval (CI): 351 - 693) FSWs not identified by any of the centers. Therefore, the real number of FSWs was expected to be 842 (95%CI: 700 - 1042). These results showed that only 41.4% of FSWs were registered by the 3 sources. Therefore, the estimated prevalence of FSWs was 0.45% among female adult population in Hamadan. In fact completeness rate of WVCTCs, DICh, and DICw were 20%, 18.4% and 7.1%, respectively and total completeness rate was 41.4%.

The current study provided an estimation of the total number of FSWs in Hamadan in 2014. Results of the current study showed that the completeness rate in each source was very low and only 41.4% of FSWs were registered in 3 data sources.

To make policies on disease control, public health decision-makers need to know the size of target populations. Incidence and prevalence of estimates provide the foundation to design and evaluate health programs (13). Capture-recapture methods are extensively used in the epidemiology to adjust surveys, surveillance systems, and disease registers for under-ascertainment, and therefore, to estimate the precise prevalence (14). FSWs are a major vulnerable population at high risk of acquiring HIV/AIDS and other STDs in Iran. A reliable estimate of their population size is very important to estimate the population with HIV/AIDS infection and implementing appropriate health policies. However, results should be interpreted with caution due to limitations of the model (15).

Due to political restrictions and sociocultural sensitivities, there is a lack of knowledge about the population of HIV-related high risk groups such as FSWs and males who have sex with males (MSMs) in Iran. The registry sources do not give a reliable population of these groups; therefore, indirect methods should be used to estimate the approximate population. FSWs are an epidemiologic “core group” in sexually transmitted diseases (STDs), especially HIV/AIDS. This is partly attributable to low referring of FSWs to get prevention services (16).

National studies indicated that about 20% of Iranian non-injecting FSWs reported having sex with at least one IDU during the past month (17). Results of studies showed that the considerable prevalence of HIV and hepatitis C virus (HCV) (estimated as 14% and 80%, respectively) among Iranian IDUs at the end of 2009 can transmit these diseases to FSWs (18).

Odek WO et al., estimated the prevalence of sex workers as 4% in female population of Kenya aged more than 15 years in urban areas (22). The corresponding value in Ouagadougou, Burkina Faso from 2000 to 2003 was estimated 4.3% among adult female population. Some studies reported the prevalence of sex workers in Addis Ababa, Ethiopia, and Niamey, Niger, as 2.9% (in 2002) and 2.1% (in 2004), respectively (6). Similar study by using direct capture-recapture method in Iran estimated that the size of FSWs in south of Tehran is 690 (23).

This difference compared to the current study was probably because sex in East of Asia and sub-Saharan Africa is a commercial task. Furthermore, statistics reported by different sources and different methods may be very misleading. In Kenya, the proportion of FSWs visiting clinics ranged from 15% to 34% (19). The results showed that clinic registration is not a reliable source to estimate the population of FSWs. Completeness of the used data sources in the current work i e, 41.4% implied underestimation of the FSWs population by registry centers in the current study setting.

The major limitation of the study was that more data sources were required to hold the assumption of normal distribution within log-linear models; otherwise, estimates may not be reliable, although the current study used all possible data sources in Hamadan to perform the current study. It is suggested to conduct other studies to directly investigate FSWs and factors such as the prevalence of HIV/AIDS, hepatitis B virus (HBV) and HCV infection among them, and also examining risky behaviors such as unprotected sexual behavior and the quality of using harm reduction tools in this group.

Underestimation of the population of FSWs by registry data sources in Hamadan is evident. Therefore, policy makers should provide health care services and preventive actions according to the actual FSWs population.

Copyright © 2017, International Journal of High Risk Behaviors and Addiction. This is an open-access article distributed under the terms of the Creative Commons Attribution-NonCommercial 4.0 International License (http://creativecommons.org/licenses/by-nc/4.0/) which permits copy and redistribute the material just in noncommercial usages, provided the original work is properly cited.
download pdf 121.61 KB Get Permission (article level) Import into EndNote Import into BibTex
Number of Comments: 0