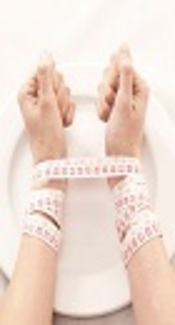 Impact of Subliminal Activation of Abandonment Schema on the Eating Behavior of Obese and Normal Weight Women: An Experimental Study

The aim of the present study was to compare normal weight and obese women in terms of the effect of the activation of abandonment schema.

This was a 2-stage approach experimental study. In the first, 81 women (41 normal weight and 40 obese) completed the eating disorder examination questionnaire (EDE-Q) and eating attitude test-26 (EAT-26). In the second, 1 week later, all participants were randomly exposed to subliminal abandonment stimuli (experimental group) or subliminal neutral stimuli (control group). The subliminal abandonment stimuli was the word loneliness and the neutral stimuli was the word gallery. Each word was presented on a visual screen for 2 milliseconds (ms). Then, the participants were instructed that they were able to eat pistachios provided by the experimenter. The weight of consumed food was recorded as the dependent variable.

Many studies have indicated that eating disorders (ED) and eating disordered behaviors are rather common phenomena among young and middle aged women in western (1) and eastern (2-4) communities. A large portion of health care resources are directly or indirectly devoted to patients with eating disorders. For example, ED patients experience a 36-day hospitalization on average for their eating problems (5). In addition, about 80% of ED patients have other mental disorders (such as, anxiety, mood, personality disorders) and/or physical comorbidity (such as cardiovascular, endocrine, and musculoskeletal disorders) (6). Thus, eating disorders impose a huge burden on health care. Therefore, development of theories that can explain the incidence and maintenance of ED and provision of effective treatments are considered a clinical and research necessity. The schema focused cognitive- behavioral model for eating disorders (7) is one recent valuable theory in the field of ED.

It proposes that all types of patients with eating disorders score higher on maladaptive schemas such as abandonment, emotional deprivation, and defectiveness/shame (8-20). However, the theory postulated that patterns of schema processes (overcompensation or avoidance strategy) explain the differences between restrictive and bulimic behaviors. Restrictive behaviors (such as restraint dieting or dietary restriction) refer to primary avoidance of negative affect via the process of schema counterattack. In this process, a compensatory schema (such as unrelenting standards) and the related behavior (e.g. perfectionism) are activated to avoid experiencing the unpleasant emotion in the first place (7, 21). On the other hand, bulimic behaviors are related to the secondary avoidance of the negative affect. In other words, the bulimic behavior is a means of reducing or suppressing the negative emotion after it was experienced through a process of schema avoidance. For example, someone with bulimia who engages in a romantic relationship or challenging task may experience the activation of abandonment, defectiveness/shame, or failure schemas. As a result, the individual tries binge eating in order to regulate negative emotions. In other words, these individuals try not to experience their emotions; they binge in order to escape from the negative emotional arousal (22-25).

Participants included 40 obese women (BMI > 30) who were referred to the obesity clinic at the Sina hospital of Tehran Medical University as well as 41 normal weight women (20 < BMI < 25) who were recruited among the hospital employees and compeers of the obese women. Among the obese women in control group, 3 participants refused to complete the procedure and were excluded from the analysis. The group of normal weight women in the experimental condition included 21 women. They would have been excluded from the study if they had been pregnant or suffered from bipolar mood disorder, psychotic disorder or substance use disorder, and nut allergies. Both obese and normal weight women were randomly assigned to the experimental (abandonment stimuli) or control (neutral stimuli) groups.

All participants completed the eating attitude test-26 (EAT-26) (30) as well as the eating disorder examination questionnaire (EDE-Q 6.0) (31). EAT-26 is one of the most widely used self-report measures for evaluating eating attitudes and behaviors. Several studies demonstrated acceptable factor structure, concurrent validity, and reliability of various versions of the EAT-26 among Western cultures (32, 33). Nobakht and Dezhkam (34) reported satisfactory internal consistency and test-retest reliability among adolescent Iranian girls. Moreover, Ahmadi, Moloodi, Ghaderi, and Zarbakhsh (35), after rigorous translation and back translation, explored the structural, concurrent and discriminant validity, as well as the reliability of Persian version of EAT-26 among young adult women. They found that a 5-factor solution provided the best model fit for the EAT-26. These factors indicated good concurrent and discriminant validity as well as test-retest and internal consistency. EDE-Q (31) was designed to assess the cognitive and behavioral features of eating disorders focusing on the last 28 days. In addition to the behavioral data, the EDE-Q provides a global score as well as 4 subscales including restraint, shape concern, weight concern, and eating concern. Frequencies of the pathological eating behaviors (such as binge eating, laxative misuse) are evaluated through 7 items. These items focus on the number of times the behaviors occurred during the past 28 days. Psychometric properties of the EDE-Q have been demonstrated by several studies (36-40). Mahmoodi, Moloodi, Ghaderi et al., (41) investigated the data norm and validity and reliability of among Iranian female students. The results indicated satisfactory concurrent and discriminant validity as well as internal consistency. One week after the completion of the questionnaires, every participant was exposed to 1 subliminal visual stimulus. Each cue was a single word that appeared in the center of the screen for 2 ms for 10 times with a 5 second interval. In line with previous researches (27, 29), the word “gallery” was used as the neutral stimuli and the word “loneliness” was used as the abandonment stimuli. Finally, the 3rd author measured objectively the height and the weight of the participants and calculated the BMI for each woman.

In order to reduce the impact of expectancy effects, participants were unaware of the purpose of the research until debriefing at the end of the investigation. A 2-stage approach was used. In the 1st stage, participants answered EAT-26 (30) and EDE-Q (37). One week later, in the 2nd stage, each woman was randomly assigned to experimental or control condition (blind to EAT-26 and EDE-Q scores), and exposed to the relevant stimuli. After that, each participant was given an opportunity to eat. In the subliminal task, women were told that the purpose of the task was to evaluate the effect of mild hunger on visual sensitivity. Therefore, women must abstain from eating for at least 2 hours before the task. They were told that a word would appear so quickly that it would be difficult to see it. The word was presented in the center of a laptop screen, 10 times, for 2 ms, with a 5 second interval (Sony, Model: VGN-cr590). In order to diminish the risk of conscious awareness of the stimuli, an exposure time shorter than the previous studies (27-29) was used.

After collecting the data, statistical analysis was conducted using SPSS19. Statistical significance was defined as P < 0.05 level. The demographic data of the groups were compared via the Chi-square test and univariate analysis of variance (ANOVA). The Kolmogorov- Smirnov test indicated that the dependent variable (the gram of the food eaten) has normal distribution among the 4 groups (z = ranged from 0.81 to 1.29, P = ranged from 0.07 to 0.51). Levene’s test was used to test the assumption of the homogeneity of variance. Univariate analysis of variance (ANOVA), univariate analysis of covariance (ANCOVA), and Mann Whitney U test was used to determine the differences in the weight of food consumed in the 5 minutes after the subliminal exposure to the word. BMI, EDE-Q, and EAT-26 scores were used as covariates to rule out any intergroup differences in these variables.

Table 1. Univariate Analysis of Variance in the Four Groups on the BMI, EAT-26, and EDE-Q Scoresa,b

The aim of this experimental study was to investigate the impact of the subliminal activation of the abandonment schema on the eating behavior of normal weight and obese women. Although the present study was not carried out on clinical women and the amount of food consumed was small, all hypotheses were supported by the findings (except for hypothesis 3). Both obese and normal weight women who were exposed to the abandonment stimuli ate significantly more food than their counterparts who saw neutral stimuli (the 1st and the 2nd hypotheses were supported). However, normal weight women in the experimental group did not eat more food than the obese women in the control group (hypothesis 3 was not supported). The obese and the normal weight women in the control groups (neutral stimuli) did not differ on the amount of food eaten (hypothesis 4 was supported). However, obese women in the experimental group consumed significantly more food than normal weight women in experimental condition (abandonment stimuli) (hypothesis 5 was supported). The results of hypothesis 5 implied that subliminal activation of abandonment schema might have greater effect on eating behaviors of obese women than normal weight women. These results indirectly supported the schema focused cognitive behavioral model for eating disorders (7). The theory argues that binge behaviors serve to avoid or suppress negative arousal due to the activation of the early maladaptive schemas. In other words, behavioral strategies are used to reduce awareness of negative emotions. These findings are implicitly in agreement with the previous literature indicating that women with eating disorders scored higher on early maladaptive schemas than non-clinical women using self report measures (10-14, 16-18). In addition, the present results are in line with previous experimental researches reporting that the subliminal activation of abandonment schema increased the amount of food eaten in non-clinical women (27, 29, 42-44). On the other hand, these findings are in line with the Zhu et al. study (24), which demonstrated the mediating role of early maladaptive schemas between life event stress and binge eating behaviors. Consistency in the results of this type of research among different cultures implies the cross-cultural validity of schema focused cognitive-behavioral theory for eating disorders. It should be noted that when very slight activation of abandonment schema in a virtual and experimental situation can increase the amount of food eaten to 3 to 4 times among non-clinical women, the effect of lifelike activation of the schema in patients with eating disorders must be so strong that a binge eating episode occurs (24).

The results of the study should be interpreted with caution. First, the obese women were recruited from among the clients of the obesity clinic, where the clients received dieting programs to reduce their weight. Although, we selected obese participants from those who were referred for the first time and did not start a formal dieting program, they might already have initiated reducing the calorie intake by themselves. It might explain why the amount eaten was small. This limits the generalization of the findings to obese women who did not intend to reduce their weight. Second, we used maladaptive eating attitudes as controlling variables. Interestingly, after controlling these factors the obese and normal weight women who were exposed to the same stimuli did not differ on the amount of food eaten. At least 1 study showed that maladaptive attitudes regarding eating, shape, and weight mediated the relationship between early maladaptive schemas and pathological eating behaviors (45). Therefore, investigating the relationship between early maladaptive schema, maladaptive eating attitudes, and pathological eating behaviors in Iranian women is a research necessity. If future researches demonstrate maladaptive eating attitudes as a mediator between early maladaptive schemas and disordered eating behaviors, there will be no need to consider the maladaptive eating attitudes as a contaminating factor.

This research is supported by the University of Social Welfare and Rehabilitation Sciences (grant number 29690).

Copyright © 2017, International Journal of High Risk Behaviors and Addiction. This is an open-access article distributed under the terms of the Creative Commons Attribution-NonCommercial 4.0 International License (http://creativecommons.org/licenses/by-nc/4.0/) which permits copy and redistribute the material just in noncommercial usages, provided the original work is properly cited.
download pdf 116.81 KB Get Permission (article level) Import into EndNote Import into BibTex
Number of Comments: 0