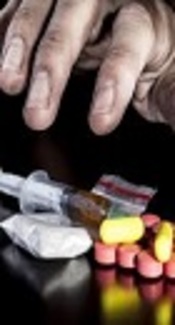 Changing Trends in Drug Abuse Patterns and Seroprevalence of HIV, Hepatitis B Surface Antigen, and Hepatitis C in Substance Abusers Admitted to A Tertiary Hospital in Amritsar, India

Injecting drug use is common among substance abusers, who frequently refer to rehabilitation centers and are detected positive for viral markers during routine screening. In this study, we evaluated drug abuse patterns and seroprevalence of HIV, hepatitis B surface antigen (HBsAg), and HCV among substance abusers in a specific period.

The current study aimed to evaluate drug abuse patterns and seroprevalence of HIV, hepatitis B surface antigen (HBsAg), and HCV among substance abusers in a specific period.

Substance abusers, admitted to our institute for rehabilitation between January 1, 2013 and June 30, 2016 were recruited in this study. All the patients were interviewed for sociodemographic characteristics and substance abuse history according to the predesigned performa. Blood samples were collected for testing HIV, HBsAg, and HCV. Statistics including percentage and mean were measured to assess the variables. The results were compared with a similar study at the same center, performed between July 1, 2009 and December 31, 2012 (duration, 3.5 years) by the same principal author.

In this study, the majority of cases (92.70%) had HCV, which is a matter of concern, as very little attention has been paid to HCV prevention and treatment, compared to HIV. Although HBV is not so common (0.06%), vaccination awareness can be still beneficial.

Viral infections, including human immunodeficiency virus (HIV), hepatitis B virus (HBV), and hepatitis C virus (HCV) infections, are known to spread commonly through shared needles among substance abusers. Injecting drug use is common among substance abusers, who frequently refer to rehabilitation centers and are detected positive for viral markers during routine screening.

Our institute, Sri Guru Ram Das Institute of Medical Sciences and Research, is located on the outskirts of Amritsar, Punjab, India, providing services for a large area, as it is a tertiary care institute. We routinely recommend regular screening of viral markers for patients, admitted for rehabilitation. In the present study, we analyzed the seroprevalence of HIV, hepatitis B surface antigen (HBsAg), and HCV in substance abusers. The present results may provide an accurate image of the seroprevalence of HIV, HBV, and HCV in the region, which can be helpful in customizing health policies for substance abuse and seroprevalence (especially HIV).

According to the HIV sentinel surveillance data in 2010, level of HIV positivity was very high among injecting drug users (IDUs) (46%) in the Amritsar district (1). The present study is important, as there are no comprehensive health policies for HBV and HCV in this region, which has a high prevalence of HIV.

The current study aimed to evaluate drug abuse patterns and seroprevalence of HIV, hepatitis B surface antigen (HBsAg), and HCV among substance abusers in a specific period.

All included patients were interviewed for sociodemographic characteristics and substance abuse history, according to the predesigned performa. Blood samples were collected for testing HIV, HBsAg, and HCV. HIV was tested at the integrated counseling and testing center (ICTC) of our hospital, using 3 consecutive kits, including SD B10 Line HIV-1/2 (standard diagnostic tool) based on immunochromatography, Pareekshak kit (Trispot test) based on immunoassay, and Pareekshak kit (Triline card test) based on immunochromatography.

HBV was screened with the Hepacard kit with sensitivity of 0.5 mg/mL for HBsAg in the serum or plasma, while HCV was screened with the Trispot kit. Pretest counseling of patients was performed at the ICTC prior to collecting samples for HIV antibody detection. Positive results of HIV antibody testing were disclosed only after posttest counseling. We screened 1262 patients, who were admitted to the psychiatric ward of Sri Guru Ram Das institute of Medical Sciences and research, Amritsar, between January 1, 2013 and June 30, 2016. Overall, 1206 patients consented to participate in the study, while 56 patients refused to participate in the study or met the exclusion criteria.

Statistics including percentage and mean were measured to assess different variables. The results were compared with a similar study, performed at the same center between July 1, 2009 and December 31, 2012 (duration, 3.5 years) by the same principal author (2).

We also found that the majority of patients (70.48%) had 10th grade education or higher (12th grade), while 10.86% were illiterate; others (18.66%) were graduates (or higher). The mean monthly income of the patients was 13346 Indian Rupees, while the mean monthly expenditure on drugs was 5745 Indian Rupees. Overall, 917 (76.04%) patients reported seeking help for addiction from a registered medical practitioner at least once, while 416 (34.49%) had a history of admission for rehabilitation at other rehabilitation centers.

The present results are similar to our previous study performed at the same center from July 1, 2009 to December 31, 2013 on 1318 patients (76.78% married). The mean monthly income was 10957 Indian Rupees, the mean monthly expenditure on drugs was 4083 Rupees, and 73.2% were matriculated (or higher). Overall, 8.49% of the patients reported having received inpatient rehab treatment earlier (2).

As depicted in Table 1, out of 1206 screened patients, 83.74% (n=1010) had opioid dependence, 13.10% (n=158) had alcohol dependence, and 3.15% (n=38) were multiple drug abusers or used other substances, including comorbid alcohol and opioid, cannabis, benzodiazepines, and inhalants. Most patients reported abusing different opioids if available, although heroin/smack (64.95%) was predominant, followed by dextropropoxyphene, tramadol, poppy husk, opium, diphenoxylate, and codeine. The dose range of heroin varied from 250 mg to 2 g, and the mean duration of substance abuse was 11.4 years.

Table 2. Patterns of Seroprevalence in IDUsa

A total of 13 patients tested positive for HIV, with or without HBV or HCV. Also, 82% of seropositive cases before drug abuse were aware that injecting drugs are a possible mode of transmission for HIV, HBV, and HCV, and media was the most common source of information. Based on the findings, none of the participants were vaccinated against HBV. The majority of seropositive cases (85.4%) were newly detected, and 33 (17.18%) seropositive patients reported having multiple current or previous sexual relations, mostly heterosexual.

In the present study, evaluation of the only male population indicated predominant substance abuse among men in the evaluated region. However, it should be noted that social stigma might be also a strong deterrent to hospitalization for rehabilitation among females. In this regard, a community-based survey seems effective for a more precise gender-based analysis of substance abuse. In the present study, more than three-fourth of the participants were married, which might represent the normal population. The mean age of admission above 30 years did not represent age at the onset of substance abuse; instead, it might reflect maturity to seek help for deaddiction.

More than 75% of the patients were in the working age group (20 - 40 years), which shows the severity of drug problems in this area. In addition, the majority of patients in the study had a rural background, which might be because of the hospital location providing services for rural populations; the most common occupation was either farming (90.2%) or unskilled labor (15%). Another reason for the high number of farmers could be the common practice of giving farms on lease to migrants in the region; therefore, they had personal freedom, as well as ample time and money for indulgence in substance abuse.

About 90% of the patients were matriculated or had higher education, which indicates the trend of education in the population and suggests the need to introduce health training for substance abuse in routine curricula. Moreover, more than 40% of the monthly income of an abuser was spent on drugs, which is a matter of concern. Overall, these consequences might lead to a downward social drift and adversely affect the regional and national economic statistics.

Overall, 416 (34.49%) patients, who reported having been admitted at least once to some other rehabilitation centers, showed high relapse, as expected during the course of deaddiction. No significant change was found regarding the sociodemographics in comparison to our previous study, except the percentage of patients with recurrent admissions, which had a 4-fold increase; this might be due to awareness of need for admission.

We noted that heroin and smack were the most commonly abused substances, which were more expensive than other available substances. The cost of procuring heroin/smack was not entirely met by routine sources of income, and 95 patients reported selling properties to earn money; also, 317 patients reported indulging in illegal activities at least once (e.g., theft, smuggling, or snatching). Farmers mostly abused heroin/smack, and laborers mostly used cheap formulations, such as dextropropoxyphene and tramadol as per availability.

The lower frequency of alcohol dependence (13.10%) in our study might not necessarily represent low alcohol dependence; it might rather indicate social acceptance of alcoholism and denial of addiction. Moreover, alcohol-dependent patients with alcoholic liver disease were mostly admitted to the medicine/gastroenterology unit rather than the rehabilitation unit; this might in fact account for the biased finding. These factors might be also a cause of late presentation for rehabilitation among alcohol-dependent patients, compared to opioid addicts.

Multiple substance abusers may represent a category of chronic abusers with multiple delayed presentations. Patterns of substance abuse have not changed significantly in the last 3.5 years, as the ratio of opioid and alcohol dependence remains the same. However, type and amount of opioid have not been assessed earlier. The drug abuse monitoring system in India evaluated primary substance abuse in inpatient treatment centers and found that alcohol (43.90%), opioids (26%), and cannabis (11.6%) were the most important substances, respectively (3).

In a systematic web-based review, variable patterns of nationwide substance abuse were depicted. The most valuable studies in this area include the national household survey and national family health India-3 of drug use in the country, in which alcohol abuse was found in 21.6% - 33.3% of men, followed by cannabis use (3%) and opioid use (0.7%), besides tobacco (57%) (3, 4). Needle sharing appears to be the most common cause of disease spread. Undoubtedly, injecting drugs are more effective, and the required dose of heroin may increase among abusers, although it is limited by the high cost of heroin; therefore, injection abuse seems viable for abusers.

Overall, more education is needed regarding the transmission modes of hepatitis and HIV. However, 82% of seropositive cases, who reported awareness of these modes, showed high-risk behaviors of substance abuse. Detection of HCV is a matter of concern in the majority of cases (92.70%), as there has been little focus on HCV prevention and treatment, compared to HIV. Although HBV is not so common (0.06%), vaccination awareness is still beneficial. In the present study, the majority of seropositive cases were in the younger age group, which can be troublesome. The overall prevalence is expected to increase gradually, as the younger generation is becoming seropositive. Compared to our previous study, hepatitis seropositivity had increased 4 times, while HIV showed a reducing trend.

Data on HCV prevalence from India are limited to few population-based studies, mostly based on blood bank data. The estimated prevalence of HCV in India ranges between 0.5% and 1.5% with a higher prevalence in the northeast, tribal populations, and Punjab and a lower prevalence in Western and Eastern India (5). HCV prevalence among IDUs ranges from 46% to 71.20% in India, as shown in studies performed in Mizoram and Chandigarh, respectively (6, 7). In a global systematic literature search, anti-HCV was found in 60% to > 80% of IDUs and HBsAg in 5% to > 10% of IDUs (8).

To conclude, the pattern of substance abuse has not changed significantly over the past 7 years, with opioids still being the most prevalent. However, the prevalence of HCV increased in this area, while HIV showed a downward trend. More focused community-based studies and household surveys are needed to assess the prevalence of viral markers more precisely.

We are thankful to the institutional ethics committee.

Copyright © 2017, International Journal of High Risk Behaviors and Addiction. This is an open-access article distributed under the terms of the Creative Commons Attribution-NonCommercial 4.0 International License (http://creativecommons.org/licenses/by-nc/4.0/) which permits copy and redistribute the material just in noncommercial usages, provided the original work is properly cited.
download pdf 90.72 KB Get Permission (article level) Import into EndNote Import into BibTex
Number of Comments: 0