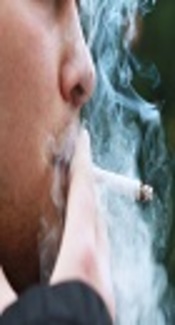 Cigarette smoking by adolescents is increasing and being popularized. However, when smoking is initiated at a young age, the risks of heavy smoking increases.

The aim of this study was to predict smoking based on the prototype Willingness model in male high school students of Bandar Abbas, Iran.

In this cross-sectional study, 422 students were selected through the multistage sampling method. Constructs of Prototype Willingness Model were measured by a questionnaire. The items for measuring the prototype Willingness model constructs were designed on a Likert scale ranging from 1 (strongly disagree) to 5 (strongly agree). Out of 422 questionnaires that were distributed among students, 394 questionnaires were filled out completely and analyzed (response rate = 93.4%). Data were analyzed by the SPSS 19 software. To analyze the chance of smoking experience through prototype/willingness model constructs, binary logistic regression was used.

Willingness to smoke increased the chance of smoking experience more than the intention of smoking. To prevent smoking in adolescents, it is recommended that they should be taught regarding refusal skills of cigarettes.

Smoking is one of the most bizarre behaviors of humans that threatens the health of millions of people around the world. It is estimated that by year 2020, the number of people, who die due to tobacco-related diseases will be 8400000, annually (1). The age at which smoking starts is very important. The younger the age of smoking initiation, the greater the chance of becoming a regular smoker for the rest of one’s life. Studies have shown that most smokers have started smoking under the age of 18 years (2, 3). In one study, the prevalence of smoking among male youth between the age of 15 to 19 years in Iran was reported to be 10.5% (4).

World-wide smoking-related data indicates the need for implementation of a comprehensive and effective program for prevention of smoking among adolescents (5). To design this program, it is needed to identify determinants, such as expectations and perceptions of youth about smoking, as well as factors, such as personality of youth or relationship with peers, who influence the identification, assessment, and decisions of youth about smoking (6). Many researchers believe that decisions about high-risk behaviors, such as smoking are likely to occur spontaneously and unintentionally. To affect unplanned or accidental decisions, Gibbons et al. developed a new concept called behavioral intention as part of a prototype Willingness model (7).

Based on this model, when an individual’s attitude towards a specific behavior is positive and they feel that some significant factors drive them towards that behavior, their inclination to behave in that way is increased. The paradigm’s reasoning for this fact is that people have some beliefs, which play an important role in their risky behaviors, and their attitude towards a behavior is directly linked with these basic beliefs or fantacies (8, 9). Based on this model, for example, the mental social imagination of a smoker among youth may lead them towards committing this risky behavior in the case that they have inclinations for doing so and the conditions are favorable (10). Research shows that the social imagination of smoking or alcoholic peers plays an important role in the youth’s decision making. The basic and main hypothesis of the imaginations/inclinations model is that setting up a health risky behavior among youth is not always planned or based on premeditation, rather, in most cases the start of such behaviors is a response to the conditions or situations that have caused the risky behavior (7).

In Iran, many studies have reported the prevalence of smoking in adolescents and young adults, but a few studies have been conducted based on the prototype willingness model (11, 12) about smoking in adolescents. Therefore, this study was conducted to predict smoking based on the Prototype Willingness Model in male high school students in Bandar Abbas, Iran.

Demographic characteristics of the students, such as age, grade, and course and constructs of the Prototype Willingness Model, were collected by a questionnaire. The items for measuring the Prototype willingness model constructs were designed on a Likert scale ranging from 1 (strongly disagree) to 5 (strongly agree).

To study the willingness to smoke, a scenario was used. The scenario was as follows: “Imagine that you are at a party and a lot of your friends are smoking. One of your intimate friends offers you cigarettes. What is your reaction toward the proposal of your friend? 1. I will take the cigarette and smoke it, 2. I will take the cigarette and throw it away, 3. I will say no thank you and reject my friend’s proposal, 4. I will leave the party”. These items were designed based on a Likert scale ranging from 1 (strongly disagree) to 5 (strongly agree). The score range of this construct was from 4 to 20. Cronbach’s alpha of the willingness to smoke scale was 0.64.

Data were analyzed with the SPSS 19 software. First, all reverse-scaled statements of the questionnaire were recorded in the same direction. Hence, in the prototype/willingness model constructs, a high score represented a negative attitude toward smoking, a high negative subjective norm to smoke, a high prototype toward smokers, a high willingness to smoke, and greater intention to not smoke. Multiple regression analysis was used to predict prototype/willingness model constructs for smoking. In this study, P < 0.05 was considered statistically significant.

Binary logistic regression analysis also showed that willingness to smoke increased the chance of smoking experience more than the intention to smoke (OR = 1.4 in comparison with OR = 0.85) (Table 4).

The aim of this study was to predict smoking based on the prototype Willingness model in male high school students of Bandar Abbas city. The results showed that 15.2% of students had the experience of smoking that was in line with the result of Hukkelberg’s study in Norvy (13), yet was in contrast to the results of Ramazankhani’s study in Iran (14). One possible explanation for this difference is that in Ramazankhani’s study, the sample size was 2272, which was much more than that of the current study. Many researches have performed studies regarding smoking in adolescents in different regions of the word and all of them have shown the problem of smoking among male adolescents (15). Since smoking is one of the most preventable causes of death, design and implementation of prevention programs could be useful and effective for improving public health.

In adolescents, some health risk behaviors, such as smoking, are not always planned or with a previous intention, yet youth often find themselves in situations that easily lead them to risky behaviors. When young people are in such situations, their willingness is a stronger predictor of risky behaviors when compared with their intention. Despite intention, willingness is less related to thinking about a behavior. In fact, willingness leads to avoidance of thinking about the negative consequences of behaviors. The person may engage in a risky behavior that they previously paid no attention to and had no intention of doing (10, 13). Many studies have shown that negative prototype about specific health risk behaviors is likely less associated with doing that behavior (13).

The results showed that willingness to smoke and positive prototype toward smokers had a negative correlation with intention to not smoke. This means that less willing to smoke and less positive prototype to smokers causes students to lack intention to smoke in the future. Moreover, the positive correlation between negative subjective norms to smoking and negative attitude toward smoking means that if parents, friends, and important community members forbid smoking, and on the other hand, if students have a negative attitude toward smoking, they will not intend to smoke and will not smoke in the future. These results are in line with the results of Morovatisharifabad et al. (11) and Barati (12, 16) studies. In a study by Wills et el. (17) regarding e-cigarette use and willingness to smoke, the results shows that students, who had used e-cigarettes, had greater willingness to smoke cigarettes compared to those, who had never used any tobacco product. The interpretation of this result was that E-cigarette advertising on mass media and portray of its users as attractive and popular people leads to willingness to smoke in adolescents (18, 19).

At schools, adolescents are influenced by their peers and the presence of a smoker among friends could be an incentive for smoking. In addition, peer pressure and the desire of the individuals to comply with the demands of their friends increases the tendency of adolescents for smoking (20). Teaching of refusal skills and rejecting cigarettes could be effective in prevention of smoking (21). Positive correlation between positive prototype toward smoking and willingness to smoke means that more positive prototype to smokers and more acceptable smokers result in greater intention for the person to smoke.

As the results showed intention to not smoke, willingness to smoke, and negative attitude toward smoking, were predictors of smoking experience. Willingness to smoke in comparison to other variables was a stronger predictor for smoking experience. These results are in agreement with the theory of Gibbons (8) and similar studies (11-13, 22, 23). It seems that adolescents are often found in situations that encourage them to be involved in high risk behaviors, such as smoking, and decision to refuse smoking is challenging for them (10). Negative subjective norms and negative attitude toward smoking and smokers, stop adolescents from easily experiencing smoking and if they are in situations that are encouraged to smoke, it could help them resist against their desire for smoking or to leave the environment. In this regard, the role of age should also be considered, because rational decision making increases with age (24). The studied group of this research was adolescents and in this age group collective behavior was more determinant than logic for the experience of smoking. In other studies based on the Prototype Willingness Model, attitudes, subjective norms, and positive prototype toward smokers had a significant relationship with intention to and experience of smoking (25-27).

The authors would like to thank Hormozgan University of Medical Science for their financial support. The authors also express their gratitude to the students participating in the study

Copyright © 2017, International Journal of High Risk Behaviors and Addiction. This is an open-access article distributed under the terms of the Creative Commons Attribution-NonCommercial 4.0 International License (http://creativecommons.org/licenses/by-nc/4.0/) which permits copy and redistribute the material just in noncommercial usages, provided the original work is properly cited
download pdf 109.18 KB Get Permission (article level) Import into EndNote Import into BibTex
Number of Comments: 0