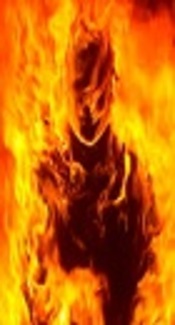 Self - burning is known as an extremely violent means of suicide.

This study aimed to investigate the epidemiology of self - burning in Iranian townships covered by Shiraz University of Medical Sciences during years 2009 to 2012.

This cross - sectional research was performed on 250 self - burning cases and 181 self - burning attempts. Data was collected from the Comprehensive Suicide Prevention Program Checklist. To analyze the data, the chi - square test and logistic regression model were utilized.

The findings are indicative of a high occurrence of self - burning among young married females. Therefore, it is vital to provide this at risk group with the necessary prevention programs.

Suicide is considered a basic public health problem (1). It is the 13th cause of mortality in the world (2) and 3rd cause among the age group of 15 to 44 years (3). One person loses their life by suicide in the world every 40 seconds (4) and the majority of suicides occur in Asian countries (5). The suicide rate in Iran has reached 19 cases per 100 000 people in the recent years (6).

The above - mentioned study (14) was carried out based on data gathered by Fars Legal Medical Organization (LMO). Therefore, due to possible underestimation of LMO data, it is suggested that in Iran data gathered by University of Medical Sciences (UMSs) might show a more comprehensive picture (15) as within Iranian Health Systems, each province is covered by one or more than one UMSs.

This study aimed to investigate the epidemiology of self - burning in Iranian township covered by Shiraz University of Medical Sciences.

This cross - sectional study was conducted on 250 cases of self - burning and 181 cases of self - burning attempt in the townships covered by SUMS. The comprehensive suicide prevention program checklist (CSPPC), which consisted of 2 parts was used. First part included the individuals’ demographic information, such as age, gender, occupation, level of education, marital status, and place of residence. The second part covered the backgrounds of suicide attempts, physical and mental illnesses, method, season, year, and the result of suicide behavior. The CSPPC is completed by all health centers of the affiliated townships on a monthly basis. However, among 27 townships of Fars Province, only Jahrom and Fasa, are not covered by SUMS and their information was therefore not included in the current study.

After the variables were coded, univariable analyses were performed using the SPSS software version 15.0 for windows (SPSS Inc., Chicago, IL). The qualitative data were reported in numbers (percentage) and to assess the relationship between self - burning cases with studied variables, the chi - square test was employed. A multivariable logistic regression model for factors associated with self - burning cases versus self - burning attempters was established. The associations of independent predictors in the final model were expressed as Odds Ratios (ORs) with 95% confidence intervals (CIs). Model discrimination was measured using the c statistic, which is equal to the area under the receiver operating characteristic (ROC) curve. Model calibration was estimated using the Hosmer - Lemeshow goodness - of - fit statistics. For multivariable analyses, the SAS statistical package version 9.1 for windows (SAS Institute Inc., Cary, NC, USA) was used. The significance level of the tests was set at 0.05.

To calculate the mortality percentage of self - burning, the following formula was applied:

Table 1. The Frequency Distribution of the Demographic Variables of Shiraz University of Medical Sciences Self - Burning Cases During Years 2009 to 2012a

Table 2 depicts the frequency distribution of the other study factors. Based on the results obtained, 7.6% of the people involved in self - burning had a history of previous attempts. Most self - burning cases were found among those with no histories of physical (88.0%) and mental illnesses (73.2%). In addition, the seasonality trend of suicides revealed that most self - burning cases had occurred in the spring (31.2%) and winter (29.2%).

Table 2. The Frequency Distribution of the Other Study Factors in Shiraz University of Medical Sciences Self - Burning Cases During 2009 to 2012a

Table 3 summarizes the results of the multivariable logistic regression model. Based on the results, there was no association between studied variables and self - burning cases versus self - burning attempts in either unadjusted or adjusted models.

Table 3. Factors Associated with Shiraz University of Medical Sciences Self - Burning Cases Versus Self - Burning Attempts in Logistic Regression Model During 2009 to 2012a, b Moreover, as in the previous research performed inside and outside of the country, especially in countries with rather similar social, economical, and cultural norms (16, 19-21), females were found to constitute the majority of self - burning cases and the female/male ratio (2.38) was significantly high in this respect. Nevertheless, this result was somewhat different from results reported from western countries. For example, the results of some studies conducted in America (22-24) or Bulgaria (25) demonstrated that self - burning rate in males was significantly higher than in females.

Therefore, it seems that being a female could be considered as an important risk factor in self - burning in Fars and other parts of Iran (7, 14, 16). This could partially be explained by the existence of some individual and social differences between males and females in the Iranian society, including female’s higher illiteracies or having low education levels and the lack of an independent financial income (16).

Living in rural areas could also be considered as another effective factor, as in this research most cases of self - burning were found among villagers. Furthermore, in accordance with a number of previous studies (16, 18, 30, 31), most self - burning cases were found to have occurred among housewives.

In the present study, 26.8% of the self - burning subjects were found with a history of psychiatric disorders. Other studies have shown that a history of mental illness, especially depression, is one of the most important risk factor for suicidal behaviors (32, 33).

Although by using CSPPC this study presents a more reliable picture of self - burning within the Fars province of Iran, the authors emphasize that CSPPC has its limitations. For example, it does not include the cause and/or motivation for self - burning, type of fuel used, burn degree, burning location, and individual’s socio - economic status. Therefore, the authors strongly suggest that CSPPC should be revised to include such important information.

The findings of the current study are indicative of a high occurrence of self - burning among young married female. Therefore, it is vital to provide this at - risk group with the necessary prevention programs. Moreover, as it is suggested by a number of other studies (34, 35), a comprehensive social campaign is needed to prevent self - immolation among young married females.

The authors thank the Health Deputy of SUMS for providing the data.

Copyright © 2018, International Journal of High Risk Behaviors and Addiction. This is an open-access article distributed under the terms of the Creative Commons Attribution-NonCommercial 4.0 International License (http://creativecommons.org/licenses/by-nc/4.0/) which permits copy and redistribute the material just in noncommercial usages, provided the original work is properly cited
download pdf 152.98 KB Get Permission (article level) Import into EndNote Import into BibTex
Number of Comments: 0