Spinal anesthesia is the method of choice for cesarean section. In opioid-dependent mothers, more narcotic is necessary for analgesia.

In this study, low dose bupivacaine was used to reduce adverse effects, and high dose fentanyl was used to improve analgesia.

This randomized double-blinded study was performed on 60 opioid-dependent pregnant females in 2 similar groups. In the high-dose bupivacaine with low-dose fentanyl (HBLF) group, 10 mg of bupivacaine and 25 µg of fentanyl, and in the low-dose bupivacaine with high-dose fentanyl (LBHF) group, 6 mg of bupivacaine and 50 µg of fentanyl were used for spinal anesthesia. The blood pressure, heart rate, itching, nausea and vomiting, Apgar score at 1 and 5 minutes, and surgeon and patient satisfaction were evaluated during the study. The sensory block onset and reverse were measured to Thorax 5 and Thorax 12, respectively. The patient’s pain was assessed by a verbal analogue scale (VAS) every half an hour. The time of analgesic was determined from anesthesia injection to verbal analogue scale of > 4. The information was analyzed using the SPSS v16 software and P < 0.05 was considered significant.

Addiction is a common problem in different nations and in 2010, there was 30,000 opioid-addicted pregnant mothers in Europe (1), and 2.3% of pregnant mothers in America were reported to be addicted (2). Cesarean section (C/S) is one of the most common operations in obstetric surgeries. Currently, spinal anesthesia is the method of choice due to lower adverse effects, faster development of relationship between the mother and the infant, and faster breastfeeding (3). Also, pain control improves breastfeeding mothers' satisfaction. Hence, many compounds are added to local anesthetics, with one of the most common being narcotic compounds. Among narcotics, fentanyl is used more due to its effect on C nerve fibers (4). In addicts, due to the decrease in the available receptors, the need for perioperative narcotic analgesic has increased (5-7).

In spinal anesthesia, lidocaine is used less due to the incidence of neurological complications, such as transient neurologic symptoms (TNS), and now the most common local anesthetic is bupivacaine, which is injected at 12 to 15 mg. High dose bupivacaine increases the level of anesthesia, hypotension, immobility duration, and patient discomfort from the lower limbs immobility and delayed walking. Hence, for reducing bupivacaine dosage and improving the quality of analgesia, opioids, especially fentanyl, are used to the extent of 10 to 25 µg. In many recent studies, the use of small amounts of local anesthetics with fentanyl is suggested (8-10).

In this study, lower dose of bupivacaine is used to reduce adverse effects and improve the patient’s movement, yet due to the greater need of opioid-addicted mothers for analgesic drugs, fentanyl at 50 µg is used.

This study aimed to evaluate the quality and comparison of this method with high-dose bupivacaine and low-dose fentanyl in analgesia of opioid-addicted patients, considering Apgar score and movement time, incidence of nausea and vomiting, and hemodynamic changes during surgery.

After the confirmation of the research deputy of medical sciences University and local ethics committee and obtaining consent from the mothers, this study was performed on 62 opioid-addicted pregnant females with no comorbid disease (ASA I). The patients with cardiac, pulmonary, renal diseases and local anesthetics sensitivity, as well as the patients with contraindications to spinal anesthesia, and non-opioid addiction, were excluded.

For the patients, a 20-G catheter was embedded in brachial large vein, and then 150 to 200 mL of saline was injected. The patients were divided randomly with random numbers table and a sealed envelope to 2 equal groups. In the high-dose bupivacaine low-dose fentanyl (HBLF) group, 10 mg of 0.5% bupivacaine with 25 µg fentanyl (total 2.5 mL), and in the low-dose bupivacaine high-dose fentanyl (LBHF) group, 6 mg of 0.5% bupivacaine with 50 µg fentanyl and saline (total of 2.5 mL) were used. The compounds were numbered in 3-mL syringes and given to the anesthesiologists in 2.5 mL equal volumes. The anesthesiologist, who performed the spinal anesthesia and personnel, who evaluated the hemodynamic changes, adverse effects and other parameters, and the patients were not aware of the groups. The spinal anesthesia was performed in all the patients in a sitting position, L4-L5 space, and midline path with 25 gauge Quincke needle. After spinal fluid drainage, the prepared solution was injected. Then, the patients were located in supine position and when the block level reached T5, the operation was allowed. The sensory block was assessed by the pinprick test. After delivery, 1 mg of midazolam and oxytocin 20u were infused slowly.

The blood pressure and heart rate was measured before and after induction, and every 5 minutes up to 20 minutes. Nausea and vomiting were evaluated with 4 scores (0 = no nausea, 1 = mild nausea, 2 = severe nausea, and 3 = vomiting), as well as anti-vomiting drugs. For hypotension (systolic blood pressure < 80 mmHg or more than 30% decrease in blood pressure) 5 to of 10 mg ephedrine, and for vomiting or severe nausea, 0.5 mg of atropine with 4 mg of ondansetron was used after placenta delivery. The patient and surgeon’s satisfaction was measured with a Likert scale (0 to 10). The Apgar score was measured at 1 and 5 minutes. The level of spinal anesthesia was assessed after the surgery and every 5 minutes for the duration of sensory blockade to T12. The incisional pain score was evaluated with verbal analog scale (VAS = 0 - 10). The analgesic time was measured from the beginning of anesthesia until the incisional pain site required analgesic (VAS > 4), and then 5 mg of morphine was injected.

Considering the prevalence of hypotension as 75% in the study of Sivevski (11) and decreased amount of hypotension by 40% with 90% power and 0.05 alpha error factors with sigmaplot software, the number of patients was estimated as 61, with 31 patients allocated to each group. After data collection with the SPSS v16 software, the study results were analyzed. Quantitative data, such as age, weight, blood pressure, heart rate, anesthesia onset time, and duration of anesthesia, were evaluated by the student’s t-test and paired t-test statistical method. Qualitative data, such as Apgar score, nausea and vomiting, patient and surgeon satisfaction were also analyzed by the X2 test and Fisher’s exact test. P < 0.05 was meaningful.

The demographic data, such as age, weight, previous births and cesareans, as well as pre-induction blood pressure, and heart rate are shown in Table 1. There was no significant difference between the groups regarding these parameters.

Hemodynamic changes: The systolic blood pressure of patients was measured after anesthesia, and then every 5 minutes up to 20 minutes. During this period, no significant difference was observed between the 2 groups (P value after anesthesia and at 5, 10, 15 and 20 minutes was 0.63, 0.31, 0.20, 0.28, and 0.42, respectively). In both groups, at the beginning of the study, the blood pressure reduction was significant (P = 0.019), while the difference was not significant (Figure 1). 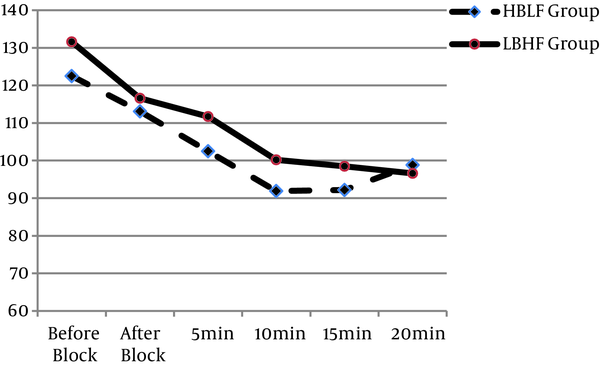 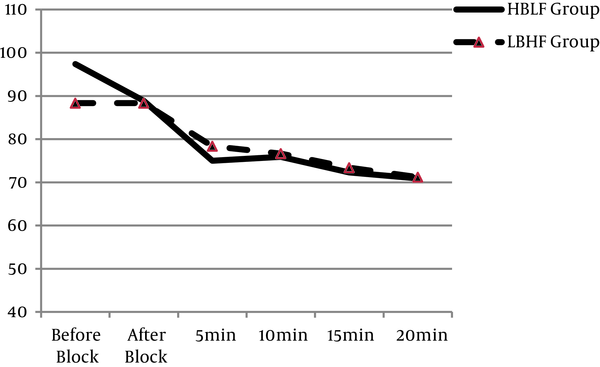 In this study, no significant difference was observed between the patients regarding the hemodynamic effects, and hypotension in both groups was the same. Greater opioid dose had no effect on postoperative nausea and vomiting, pruritus, and also Apgar score at 1 and 5 minutes. In the HBLF group, with more bupivacaine and less fentanyl, the block onset time was faster, anesthesia duration was longer, yet analgesia duration and the time of first postoperative analgesia in the HBLF group was shorter than the LBHF group.

Numerous studies have compared high-dose and low-dose bupivacaine, yet 50 µg fentanyl was not used in any of the studies, and no study was performed on spinal anesthesia of opioid-addicted mothers, and in order to improve the hyperalgesia and reduce the local anesthetics adverse effects, and earlier movement, 6 mg bupivacaine was used with 50 µg fentanyl.

In another study performed on 50 cesarean sections, 7.5 mg bupivacaine + 15 µg fentanyl and 7.5 mg levobupivacaine + 15 µg fentanyl were compared. The bupivacaine start time was faster, yet duration of anesthesia in levobupivacaine was longer (14). In a systematic research on 35 studies, bupivacaine with doses above and below 8 mg was evaluated. In the low-dose group, the need for analgesic was higher during surgery, yet the adverse effects, such as hypotension, nausea and vomiting was reported to be lower. In the low-dose group, only 2 patients needed general anesthesia and despite the benefits of low-dose bupivacaine, the quality of anesthesia and motor block had decreased. Another review study showed that low-dose of bupivacaine (5 to 7 mg) is a valuable method in maternal and fetal prognosis improvement, despite the lower quality of motor block (10).

In conclusion, in this study, the greater dose of narcotic in opioid-addicted pregnant mothers reduced the need for bupivacaine, and also had faster sensory reversal block and longer duration of analgesia. There was no difference between the adverse effects of 50 µg fentanyl and lower dose. In the group with lower dose of fentanyl and higher dose of bupivacaine, the anesthesia onset time was faster and sensory block was longer.

Copyright © 2018, International Journal of High Risk Behaviors and Addiction. This is an open-access article distributed under the terms of the Creative Commons Attribution-NonCommercial 4.0 International License (http://creativecommons.org/licenses/by-nc/4.0/) which permits copy and redistribute the material just in noncommercial usages, provided the original work is properly cited.
download pdf 130.44 KB Get Permission (article level) Import into EndNote Import into BibTex
Number of Comments: 0