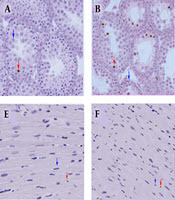 Acute exposure to MDMA (methylenedioxymethamphetamine) has some adverse effects on reproductive and cardiovascular systems, possibly because of oxidative stress induction. Supplementary vitamins such as vitamin E can decrease the rate of oxidative stress and prevent the incidence of dysfunction in organs.

This study was designed to evaluate the adverse effects of MDMA exposure on the testis and heart tissue and elucidate the protective effect of vitamin E as a potent antioxidant.

We assigned 28 male albino mice into four equal groups including control, MDMA, MDMA + vitamin E, and olive oil as a solvent of the vitamin. Mice were killed at the end of day 35 to conduct histological and plasma examinations. To find the relationship and make pair-wise comparisons, the one-way ANOVA test and Tukey test were used, respectively.

MDMA (3,4-methylenedioxymethamphetamine), or simply ecstasy, is a chemical compound commonly abused as a drug for psychoactive recreational experiences (1). Acute MDMA exposure has negative effects on the physiological functions of many cells and organs. Some tissues such as the brain, heart, liver, kidney, and testis may also be damaged, leading to dangerous consequences depending on the damage intensity (2). A general damage of these factors is production of oxidative stress that plays the main role in MDMA pathogenesis (3, 4). By increasing the heart rate and blood pressure, MDMA can potentially stimulate cardiovascular action (5). Cardiac arrhythmias, myocardial infarction, dilated cardiomyopathy, and myocarditis along with inflammatory infiltrate and necrosis areas may be the results of MDMA administration. Additionally, eccentric left ventricular dilation, diastolic dysfunction, cardiac myocyte contractile dysfunction, and impaired relaxation may occur following high administration of MDMA (6). Among other subjective symptoms, erectile dysfunction or lack of sexual drive is a common disorder in the reproductive system as reported by drug consumers. There may be a relationship between prolactin increase and lack of sexual drive after MDMA exposure. Since MDMA can increase reactive oxygen species (ROS), oxidative stress as an unspecific mechanism of genotoxicity can directly affect reproductive organs. Furthermore, sperm DNA damage is increased and the histopathology of testes is changed by long-term MDMA exposure (7).

As a fat-soluble non-enzymatic antioxidant, vitamin E has antioxidant activity and intercalates lipids in biological membranes. Therefore, vitamin E isomers can stop ROS-based reactions producing lipid peroxides (8). It is reported that vitamin E deficiency impaired the nervous, skeletal, circulatory, muscular, cardiovascular, immune, and reproductive system (9). Vitamin E could decrease the elevation of the lactate dehydrogenase (LDH) enzyme, which is found in many body tissues including the heart and may cause cardiac damage. It also can decrease creatine phosphokinase (CPK), which is a cardiac index to estimate the heart function and help in the diagnosis of acute myocardial infarction. Vitamin E can positively affect the treatment or prevention of cardiac dysfunction, inflammation, myocardial infarction, DNA damage, and apoptosis in the heart (10, 11). The damaging effects of active oxygen radicals on spermatogenesis and sperm health in the reproductive system could be prevented by vitamin E to decrease testicular oxidative stress (12). There is no information about the vitamin E effects on the heart and testicular toxicity produced by MDMA exposure in mice or other mammals up to now.

This study aimed at the evaluation of the adverse effects of MDMA on serum biochemical indices and histological parameters and the protective effects of vitamin E on mice.

This study was conducted following the principles of the National Institute of Health (NIH publication #85 - 23, 1985) for animal experiments with the ethical code of IR.UMSU.REC.1395.541. Briefly, 28 sexually matured, 6-8-week-old male albino mice with a weight range of 25 - 30 g were purchased from the animal house of the Urmia University of Medical Sciences and kept under a specific condition, with a controlled temperature of 25ºC and a constant cycle of 12-h light/dark. Tap water and standard pellet food were given ad libitum.

Considering that spermatogenesis lasts for 35 days in mice (16), at the end of day 35 and immediately 24 h after the last administration, a ketamine and xylazine mixture (100/10 mg/kg, i.p.) was used for anesthetizing mice (6). Blood samples were collected through cardiac puncture in heparinized tubes. The samples were centrifuged for 5 min at 4ºC - 6ºC and 2500 rpm before conducting biochemical assays. After collecting blood samples, mice were sacrificed by cervical dislocation. For histopathological examinations, the testis and heart tissue were dissected and stained by Hematoxylin and Eosin (H & E), Masson’s trichrome, and TUNEL.

Tissues were fixed in 10% neutral buffered formalin. After dehydrating, the samples were embedded in paraffin and some sections (5 µm) were stained with H & E for histopathology using light microscopy. Other sections were stained with TUNEL and Masson’s trichrome for apoptosis and necrosis detection, respectively.

For each testis, we randomly selected 20 tubular profiles that were round and nearly round seminiferous tubules diameters (STD) and seminiferous epithelial height (SE) with Motic camera and software. Three spermatogenesis indices in testicular tissue were evaluated including tubular differentiation index (TDI), repopulation index (RI), and spermiogenesis index (SPI).

To detect dead cardiomyocytes and testicular germ cells, a TUNEL assay kit (Roche) was used based on the manufacturer’s instructions. To fulfill this procedure, we randomly selected four mice from each group and six random areas of each mouse heart from one slide per sample, as well as 20 tubular profiles per each testis to be counted. The percentage ratio of TUNEL-positive cell nuclei to the total nuclei was calculated for this index (18).

To pinpoint the fibrosis, we stained heart and testis tissue sections with Masson’s trichrome kit (sigma, HT15) based on the manufacturer’s instructions. Photographs were prepared by Motic camera and software in which collagen and tissue were stained blue and red, respectively.

The activity of CK-MM, the most active part of CPK, was inhibited by a specific antibody against CK-M and only was the activity of CK-B measured by spectrophotometry. Lactate dehydrogenase is a hydrogen transfer enzyme that is found in almost all cells and it is a sign of tissue damage. In this method, pyruvate is transformed into lactate through the oxidation of NADH to NAD+. The activity of LDH was measured by the photometric assay (Pars Azmoon, Iran).

Based on the H & E technique, we found edema in the interstitial tissue. The disruption of spermatogenic cells was observed in most seminiferous tubules in the MDMA group. Our study revealed improved conditions in the MDMA + vitamin E group. No considerable change was observed in other groups. Five weeks after exposure to MDMA, the heart tissue displayed morphological disorganization as the loss and necrosis of myofibrils, edema, penetration of inflammatory cells, and cytoplasmic vacuolization. However, structural abnormalities of heart tissue were considerably prevented by vitamin E treatment in the MDMA + vitamin E group. Cell infiltration, increased intramuscular space, and necrosis were seen in MDMA-treated heart tissue, and vitamin E could clearly reduce heart inflammation (Figure 1).

A, Optical micrographs of testis sections stained with hematoxylin/eosin in control; B, MDMA; C, MDMA + vitamin E; D, and olive oil; groups. Tubular degeneration (a) and interstitial edema (b) in most seminiferous tubules were observed in the MDMA group compared to the control and olive oil groups. Cell infiltration, increased cardiomyocyte space; F, necrosis were seen in MDMA-treated heart tissue. These disorganizations considerably improved in the C and G groups (×20).

Table 1. Effects of i.p. Administration of MDMA on Histopathological Indices and Protective Effects of Vitamin E in All Groupsa, b

bIn each row, all groups were compared with each other. Different letters (A, B) in each row represent significant differences between groups (P < 0.05).

To determine the fibrous, the lesion areas of excised heart and testis tissues were stained with Masson’s trichrome. The MDMA treatment could induce peritubular and myocardial fibrosis or increased collagen deposition. However, MDMA + vitamin E treatment showed a considerable depletion in peritubular and myocardial collagen deposition with its high deposition on blood vessel sides compared to the MDMA group (Figure 2). Significantly higher dead cells were revealed in the MDMA group than in the other groups (P < 0.05). According to the TUNEL assay, there was no significant increase in dead cells in all other examined tissues (Table 1 and Figure 3). Table 2. Effects of i.p. Administration of MDMA on CPK and LDH Indices and Protective Effects of Vitamin E in All Groupsa,b

aValues are expressed as mean ±SD.

In this study, we explored the chronic effects of MDMA on the heart and testis structures of mice and the protective effects of vitamin E. Consistent with previous studies, the histopathology of the testis in the present study showed interstitial edema in the MDMA-treated group. Histological damages are the indirect results of the general toxicity of MDMA. Among some possible mechanisms, there are direct toxic actions of MDMA or its metabolites, hormonal disturbance, and alteration of 5-HT activity in the testis. By decreasing the testicular blood flow and vasomotion and inducing the vas deferens contraction, 5-HT plays an important role in the reproductive system of males. The reduction of testicular blood flow may result in edema and testicular hyperemia. It also induces seminiferous tubule fluid accumulation. Thus, observed edema in the MDMA group may be produced by a serotonergic agonist action caused by MDMA itself or indirectly by the alteration of 5-HT concentration in testes (19). The administration of the antioxidant in the MDMA + vitamin E group, due to its effect on maintaining the integrity of the membrane, noticeably prevents damages (12). Due to cell loss from the epithelium, the STD and SE of seminiferous tubules decreased significantly by MDMA led to epithelial sloughing and Leydig cell atrophy in some tubules. Furthermore, this study revealed lower values of SPI, TDI, and RI in the MDMA group than in the other groups. Song et al. showed that the MDMA administration induced oxidative stress, which, in turn, led to apoptosis in Leydig and Sertoli cells. Considering the effect of Sertoli cells in maturation and movement of germ cells (20) and the protective and nutritive roles of Sertoli and Leydig cells in spermatogenesis (19, 21), it is suggested that the reduction of Sertoli and Leydig cell numbers may result in serious tubular degeneration and spermiogenesis indices decrement. Moreover, noticeable hyperthermia may occur in some individuals taking MDMA (22). The role of vitamin E in reducing apoptosis induced by oxidative stress and hyperthermia (23) may explain the reduction of apoptotic index in the MDMA + vitamin E group.

The histological study of the heart revealed structural abnormalities in the MDMA group. It has been suggested that hyperthermia increases the free radicals formation (24), which results in cardiomyocyte fibrosis (25). However, regarding the preventive effects of vitamin E against ROS and lipid peroxidation (8), the administration of vitamin E in the MDMA + vitamin E group noticeably resulted in testis damage prevention.

No noticeable difference was observed between the olive oil and control groups. This was in accordance with recent studies reporting that the olive oil administration is not the best or most effective way to prevent testis and heart damages (27, 28).

In conclusion, according to the results of the present study, MDMA administration had adverse effects on testis and heart tissues. However, the findings clearly revealed that vitamin E considerably attenuated the deleterious impact of MDMA.