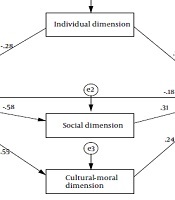 High-risk behaviors are potentially harmful and threaten health and well-being of adolescents.

This study aimed to establish a causal relationship between mindfulness and high-risk behaviors mediated by social-virtual networks.

The results obtained from the current study showed the importance of the mentioned variables in having a tendency toward high-risk behaviors.

High-risk behaviors are potentially harmful and are conducted by people arbitrarily or inadvertently without awareness of possible adverse outcomes (1). The involvement in high-risk behaviors depends on biological, individual, environmental, social, and cultural factors. Some researchers believe that adolescents’ tendency to high-risk behaviors reflects their involvement with emotional and psychological issues (2). Among the individual factors mindfulness that includes a number of components required for adaptive coping strategies (3).

Mindfulness is defined as a form of meditation achieved by paying attention purposefully to the present time without having any judgments and prejudices. It requires specific behavioral, cognitive, and metacognitive strategies to focus on the attention process. This, in turn, prevents diminishing spirals of negative moods/negative thoughts and tendencies to provide worrisome responses, aids in developing a new perspective, and leads to the emergence of pleasant thoughts and emotions (4). Christina et al. (5) concluded that there was an association between mindfulness and high-risk behaviors in terms of alcohol consumption, cigarette smoking, violence, and hookah smoking. Several factors play mediating roles in the relationship between mindfulness and high-risk behaviors among which, the role of social-virtual networks is noticeable (6). Social-virtual networks are tools that enable users to connect with each other by creating personal information profiles and inviting their friends, acquaintances, and coworkers to share their information and send e-mails and instant messages to them. These personal profiles include different types of information, photos, videos, audios, and weblogs (7).

This study sought to answer the following questions:

-Is the causal model between mindfulness and high-risk behaviors mediated by social-virtual networks (Figure 1)?

The hypothetical model of research

-Are the components of mindfulness and social networks related to having a tendency to high-risk behaviors?

This was a descriptive correlational study done on senior high school male students in Zahedan. Among these students, based on the Krejcie and Morgan’s table, 370 students were selected randomly using the cluster random sampling method. For this purpose, first, four schools were randomly chosen from four regions of Zahedan (north, south, east, and west) and three classes (with 93 students in total) were selected from each school. Finally, 372 students were chosen to answer the questionnaires. However, two questionnaires were eliminated due to that the responders left the study. Hence, a corpus of 370 students was tested. Data collection tools were as follows.

The inclusion criteria included an age of 15 years, sufficient physical and mental capacity, and the lack of diseases interfering with attending the sessions. The exclusion criteria included a history of other illnesses, such as mental disorders, cognitive disorders, and recurrence of disease, an age of more than 18 years, and the lack of interest in participating in research.

After explaining the goal of the study, written informed consent was obtained. Subsequently, the questionnaires were distributed to the students. Some additional explanations were presented for possibly unclear questions to avoid any kind of ambiguity and/or bias. The information of all participants was completely kept confidential and a code was assigned to each person.

3.2. Questionnaire on Effects of Being a Member of Social Networks

This questionnaire was developed by Moghimi and Latifi (11). It consists of 37 items on three subscales, i.e. individual (items 1 - 15), social (items 16 - 29), and cultural-moral (items 30 - 37) subscales. The validity of the scale was examined using a content analysis method. To this end, the items were handed over to 10 experts and researchers working in the field including university professors and experts working at FETA Police. Considering 217 gathered questionnaires, the Cronbach’s alpha coefficient of this questionnaire was obtained as 0.87. In another study conducted on a corpus of 230 people, this coefficient was reported as 0.88 (11). In the present study, using Cronbach’s alpha coefficient, the reliability of this questionnaire was 0.83.

This scale was developed and standardized by Zadeh Mohammadi et al. (12) and it includes a total of 38 items. This scale is to assess high-risk behaviors in seven subscales of cigarette smoking (items 15 - 19), alcoholic beverages consumption (items 9 - 14), substance abuse (items 1 - 8), violence (items 20 - 24), sexual behaviors and relations (items 25 - 28), relations with the opposite sex (items 29 - 32), dangerous driving (items 33 - 38) and a general aspect of high-risk behaviors (12). In a study by Nouruzi and Amiri Majd (13), the results of the exploratory factor analysis showed that this scale explained 64.84% of the variance of risk-taking. The Cronbach’s alpha coefficient for the whole scale was 0.94 and it ranged from 0.74 to 0.93 for its subscales, which all indicated its good reliability. In this study, using Cronbach’s alpha coefficient, the reliability of the scale was 0.86.

Pearson correlation test in SPSS V. 22 and path analysis in Amos were used for testing the hypotheses. We observed all relevant ethical considerations including the confidentiality of the data obtained from questionnaires, obtaining the informed consent of participants, and the freedom to abandon the study.

Table 1. The Mean Scores and Standard Deviation of Research Variables The model fit indices are presented in Table 2.

The root-mean-square error of approximation (RMSEA) was 0.067 and the standardized root mean square residual (SRMR) was 0.052, which are smaller than the criterion value (0.08); therefore, they confirmed that the model fitted well. Finally, the IFI, CFI, GFI, and NFI indices were all larger than the criterion value (0.9). Overall, considering the sum of the calculated fit indices, the fit of the causal model between mindfulness and high-risk behaviors mediated by social-virtual networks was confirmed.

The second finding of the current study indicated that there were significant positive relationships between the individual, social, and cultural-moral dimensions and high-risk behaviors; therefore, it can be concluded that social-virtual networks provide the basis for increasing high-risk behaviors. This result is consistent with the results of a number of previous studies (8, 17-19). In a study conducted on 157 adolescents aged 12 to 14 years, Turpyn and Chaplin (17) found out that there was a significant correlation between mindfulness and high-risk behaviors. Valente et al. (18), in a study on adolescents, showed that the existence of interactive networks, including social networks, had harmful effects on health and increased adolescents’ tendency to high-risk behaviors. In another study, Bussing et al. (19) showed that high-risk behaviors in children could be assessed by considering the effects and consequences of social networks. In explaining this hypothesis, it should be stated that the dissemination of violence, substance consumption, and drug trafficking are parts of the cyberspace content. Substance abuse, violence, and sexual behaviors are responsible for many mortalities in adolescence and early adulthood. Therefore, alcohol consumption, murder, suicide, rape, sexual activities out of marriage, destruction of public property, and substance abuse are regarded as high-risk behaviors, the occurrence of which is a strong predictor of the incidence of other behaviors. This means that by engaging in each of these behaviors, such as drinking alcohol or abusing substances, the likelihood of conducting other high-risk behaviors increases (12). Therefore, being active in social-virtual networks paves the ground for increasing the tendency to a number of high-risk behaviors.

The last finding obtained from this study demonstrated that the indirect coefficients in the relationship between mindfulness and high-risk behaviors mediated by social-virtual networks were significant. Therefore, the research hypothesis was confirmed and it can be concluded that mindfulness affected high-risk behaviors via social-virtual networks. Examining the research background showed that there were no similar studies in the literature to be compared with the current study. In explaining the above hypothesis, it can be said that mindfulness, by paying purposeful attention, being present at the moment, and trying to avoid judgment, emerges in response to the momentary experiences. The key elements of this definition of mindfulness include voluntary awareness, presence at the moment, and lack of judgment. As we know, mindfulness is closely related to the ability to regulate emotions such that it helps people react to events in a proper way and enables them to cope with difficult situations. Most people who develop addictive behaviors usually do not have the ability to deal with critical conditions in an appropriate manner (20). Moreover, social networks, on the one hand, have the ability to exacerbate insecurity, promote delinquency, and encourage individuals’ susceptibility to crime and on the other hand, by acting responsibly in informing people and promoting healthy life patterns, are effective in reducing crime and providing a sense of security (21). Similarly, some researchers believe that one of the main causes of the incidence of violence in a society is the spread of violence in social networks. Therefore, it can be noted that, by promoting these states, social networks can increase people’s tendency to high-risk behaviors (22).

A limitation of this study was its cross-sectional design. In addition, the use of self-reporting tools was another limitation of this study. Accordingly, it is suggested that semi-structured interviews be used in future studies. Considering the relationship between mindfulness and high-risk behaviors, it is suggested that the components and principles of mindfulness be trained in the form of educational workshops. Moreover, it is also necessary to train people on how to use social-virtual networks properly and incorporate their disastrous outcomes into textbooks.

The authors would like to sincerely thank all the students in Zahedan who helped them in carrying out this study.

Copyright © 2019, Author(s). This is an open-access article distributed under the terms of the Creative Commons Attribution-NonCommercial 4.0 International License (http://creativecommons.org/licenses/by-nc/4.0/) which permits copy and redistribute the material just in noncommercial usages, provided the original work is properly cited.
download pdf 112.37 KB Get Permission (article level) Import into EndNote Import into BibTex
Number of Comments: 0