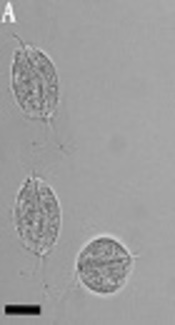 Trichomoniasis Prevalence at a Care Center Among Women with High-Risk Behaviors in Zahedan, Iran

The aim of the present study was to investigate the frequency of T. vaginalis among women with high-risk behaviors in Zahedan, Southeast Iran.

In total, 90 symptomatic women, aged 20 to 60 years, were recruited between February and May 2017. The samples were smeared and cultured. After extracting DNA, the actin gene was ampliﬁed via nested polymerase chain reaction (PCR).

Of the 90 samples including vaginal secretions and urine specimens, 23.3% (21/90) were positive for T. vaginalis based on wet mount microscopy. All wet mount positive samples were also T. vaginalis positive by PCR and cultivation. The highest prevalence of trichomoniasis was observed at the age of 31 to 40 years (38.09%). Trichomoniasis showed no significant difference by age groups (P > 0.05 on the chi-square test). Four PCR-positive samples were successfully analyzed by RFLP, which were associated with genotype E.

The current research reflected a high level of infection in women with high-risk behaviors in Zahedan, southeastern Iran. To clarify the epidemiology of disease in this area, more studies in other populations are required.

Trichomoniasis is the most common nonviral sexually transmitted infection (STI) worldwide with an estimated incidence of 276 million new cases annually (1, 2). Trichomoniasis is attributed to Trichomonas vaginalis as an anaerobic, flagellated protozoan parasite. Although T. vaginalis affects both men and women, manifestations of trichomoniasis are primarily observed in women (1). In most cases, trichomoniasis tends to be clinically asymptomatic in women and one-third of asymptomatic women become symptomatic within six months (3). The symptoms among women include vaginal discharge (which is often diffuse, malodorous, and yellow-green), dysuria, itching, vulvar irritation, and abdominal pain (3). Trichomoniasis can increase the risk of acquiring or spreading other STIs, as it brings a greater risk of HIV acquisition and transmission (1.5 - 2.7 times) (1) and creates nearly a four-fold increase in HIV shedding (4). Wet mount microscopy is the most commonly used test for detecting T. vaginalis in cervicovaginal specimens, with a sensitivity of 51% to 65% (4). For many years, the culturing technique has been the accepted gold standard for diagnosing T. vaginalis infection, with a sensitivity of 85% - 95% (5). However, this procedure is rather time-consuming and costly. Most importantly, the need for return visits can be a barrier to proper treatment. The sensitivity of the culture method is much less than the sensitivity of nucleic acid amplification tests, including polymerase chain reaction (PCR) (1). However, the determination of T. vaginalis genotypes in asymptomatic or symptomatic patients can represent an image of the epidemiology of the parasite in the region (6, 7).

In some regions of Iran, the prevalence rate of trichomoniasis has been determined between 2% and 8%; the rates can also reach up to 30% depending on the cultural and social status (8-11). So far, no reliable study has been performed on the epidemiology of T. vaginalis in Southeast of Iran.

This study aimed to represent the first reliable report of T. vaginalis in women with high-risk behaviors in Southeast Iran.

This study was performed between February and May 2017 to evaluate the molecular epidemiology of T. vaginalis among symptomatic female patients. The patients were selected from a care center for women with high-risk behaviors (defined as risky sexual behaviors, substance abuse, suicidal behaviors, cigarette smoking, alcohol consumption, and other risky behaviors) in Zahedan, Southeast Iran.

Out of 100 women with high-risk behaviors, 90 symptomatic women aged 20 to 60 years were included in the study. Asymptomatic women were excluded from the study. Details on the clinical symptoms, age, education, kind of opiate abuse, and marital status of the patients were obtained from initial request forms. Vaginal swabs and urine specimens were collected in Falcon 15-mL conical centrifuge tubes and plastic cups, respectively. Vaginal specimens were taken with sterile cotton swabs using disposable sterile speculums from the posterior fornix of the vagina (6). The collected samples stored in a plastic box were immediately transferred to the Laboratory of Parasitology, Bu Ali Hospital, Zahedan.

In order to detect T. vaginalis, the vaginal swabs were used for direct observation of wet mount to determine motile trophozoites. The urine specimens were used to inoculate in the diphasic xenic Dorset’s culture medium (12). Then, tube incubation was carried out at 37°C for eight days and the tube was observed microscopically every two days for the presence of trophozoites. Urine specimens were centrifuged (1000×g, 10 min, 4°C) and the sediments were used for the direct observation of wet mount to detect T. vaginalis based on motile trophozoites. All of the positive and negative samples in the microscopic examination were stored at -20°C before DNA extraction and amplification.

To remove the microscopic detection limitation of low sensitivity and to ensure the diagnosis of all the actual positive samples for trophozoites, all the isolates were also DNA extracted and PCR amplified. The sediment related to each sample was washed by phosphate-buffered saline (PBS; pH: 6.4) three times at 8000 rpm for 60 seconds. The DNA extraction was performed using an Exgene stool SV kit (GeneAll Biotechnology Co. Ltd, South Korea) as instructed by the manufacturer (13-15).

The AccuPrep PCR Purification kit (Bioneer Co., South Korea) was used to purify the PCR products. Then, they were sequenced in both directions using an automated DNA analyzer (Genetic Analyzer 3730; Bioneer Co., South Korea) to examine the size of fragments and confirm the banding patterns. The development of multiple sequence alignments and phylogenetic tree construction were done using the CLUSTAL W program and neighbor-joining (NJ) method in the Kimura's two-parameter model in MEGA version 6.0 (http://www.megasoftware.net/) (16).

In this study, the representative nucleotide sequences and their amino acids sequences were deposited in GenBank (accession no., MF462190 to MF462193).

Microsoft Excel 2010 was used to present the data as spreadsheets. The chi-square test in SPSS version 20 was used for statistical analysis at the significance level of 0.05.

Table 1. The Prevalence of T. vaginalis Infection for Women with High-risk Behaviors

aDetermined by the chi-square test.

A, T. vaginalis trophozoites detected in urine specimens of symptomatic patients in the current study (bars showing 15 μm); B, Gel electrophoresis of DNA fragments obtained after digesting by PCR-RFLP. Lanes 23, 34, 57, and 90 show the banding patterns after digestion with RsaI, HindII, and MseI (GenBank Accession no. AB468096 and AB4698092); lane M is a 50-bp DNA ladder; lane G (SSP) is the amplified actin gene with size 1100 bp (secondary PCR product). The phylogeny of T. vaginalis genotypes according to the maximum-likelihood. The phylogenetic tree was constructed based on the multiple alignments of actin gene sequences. Bootstrap values, calculated from 1000 repetitions, are placed at each branch point. Distance represents the number of base substitutions per site. Tetratrichomonas gallinarum and Tritrichomonas suis were considered as outgroup branches. • GenBank accession no. MF462190 is the genotype identified in this study.

Surprisingly, molecular amplification did not detect more T. vaginalis cases than the wet mount or culture methods did. Indeed, the three methods performed equally well. It was expected that the molecular method would produce better results; however, this weakness may be attributed to the low amount of amplified DNA for visualization (13-15).

In the current study, genotype E of T. vaginalis was identified by RFLP analysis. The results reported in our study correspond well with those from studies published in Iran by other researchers. The findings of the present investigation are supported by a study that comprehensively accomplished to identify the different genotypes of T. vaginalis in symptomatic patients based on the RFLP method of the actin gene (7). In the study conducted by Momeni et al. (9) in Karaj (Northern Iran), 45 microscopy-positive samples were examined via PCR-RFLP. The findings showed that 23 (51.1%), 11 (24.4%), 6 (13.3%), and 3 (6.6%) samples contained genotype G, genotype E, genotype H, and genotype I, respectively. Similarly, an Iranian study in Tabriz (Northwestern Iran) that examined 50 suspected clinical samples found that 73.4% (20/30) were genotype G and 26.6% (8/30) were genotype E (6). In our study, all isolates were related to genotype E. However, it can be easily understood that the non-observance of individual health has caused genotype E to be scattered in women referring to our care center.

We thank Nahid Sepehri-Rad and Dr. Hamed Mir-Jalali for their technical assistance.