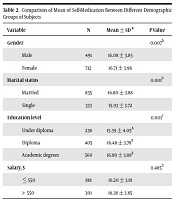 The aim of the present study was to determine the prevalence of self-medication with analgesics for dental problems over a two-year period among a population in Shiraz, Iran.

This cross-sectional study recruited 1,203 people. They were randomly selected from among men and women older than 12 with a mean age of 36.2 years, attending outpatient health clinics in 10 districts of Shiraz. A researcher-made questionnaire was used to collect data on demographic variables, dental pain, and self-care remedies utilized to combat dental pain. SPSS version 22 software was used for statistical analysis by the chi-square test and one-way ANOVA. The values of P < 0.05 were considered significant.

Self-medication is a growing public health problem defined as the “Use of a product without prescription or medical consultation to prevent or treat a disease, reduce symptoms, and promote health” (1). Information sources for self-medication vary widely from pharmacists, relatives, friends, and media to traditional practitioners and people’s own knowledge and experience (2).

Shifting toward self-diagnosis and medication instead of seeking proper professional healthcare advise is directly linked to the lack of time, money, or accessibility of healthcare services, as well as religious or cultural beliefs and prior treatment for a similar condition (15, 18). Such behavior results in harmful events, such as drug interaction, toxicity, and bacterial resistance, which are caused primarily by poor diagnosis, inappropriate indication, and overdose (19).

A headache, cough, fever, and pain are the most common consequences of practicing self-medication (10, 20). In dentistry, the chief complaint is a toothache, which is the most common reason for self-medication (18, 21). Analgesics are among medications most frequently used in self-medication (22). Despite the frequently unsupervised use of over-the-counter (OTC) analgesics, side effects are less often reported (23). Nevertheless, these analgesics are not completely risk-free. They are only safe when used according to current guidelines (24) and a patient with a painful toothache might not properly follow the guidelines.

Among developing countries, Iran is the host of highly prevalent self-medication (83.3%) (16). To the best of our knowledge, no research has evaluated this issue with analgesics for dental purposes. Hence, the objective of the present study was to determine the prevalence of self-medication with analgesics for dental problems over a two-year period among a population in Shiraz, Iran.

This cross-sectional study was conducted between January 2016 and February 2018. The study protocol was approved by the local Ethics Committee of Shiraz University of Medical Sciences (IR.SUMS.REC. 1397.S49). The sample size was calculated to be 984 individuals, based on the expected prevalence of self-medication (80%) with an accuracy of d = 2.5% and an error of 0.05. However, so as to augment the accuracy and validity of the study, the number of participants was increased by 20% - 25%. Finally, 1,203 individuals were entered into the study.

For sampling, in the first step, 10 crowded districts of the city were considered on a map. Then, for two months, one day of each week (for eight weeks) was randomly selected. Finally, individuals in these districts that were satisfied were chosen by convenience sampling to fill out the questionnaires.

The study population was randomly selected among men and women older than 12 attending out-patient health clinics in 10 districts of Shiraz. Their education level and demographic information were recorded. The exclusion criteria included subjects who were illiterate, subjects who were mentally disabled to give valid responses to questions, subjects not willing to participate, and subjects who were physicians, dentists, or pharmacists.

This survey was carried out with a single-page questionnaire validated by four specialists including a dentist, a psychiatrist, a pharmacist, and a questionnaire advisor. Before beginning the data collection, the reliability of the questionnaire was assessed through pretesting a small group of 38 patients. Cronbach’s Alpha of 0.851 was obtained that showed an acceptable level of reliability. Subjects were informed that they were part of an investigation and their personal information would remain confidential. Privacy and confidentiality were completely protected; that is, no identifier or information associated with names or IDs was collected. Incompletely questionnaires were excluded from the study.

The questionnaire comprised four major parts, with the first part dealing with such demographic information as age, gender, education, marital status, and salary. The second part dealt with issues revolving around health status, including questions about smoking, frequency of physical exercise, and routine medical checkups. In the third part, patients were asked about analgesics taken in the case of a toothache (whether it was prescribed or self-prescribed), maximum dosage of analgesics, and its duration. The final section was about the side effects of analgesics.

Data were analyzed using SPSS version 22 software (SPSS Inc., Chicago, IL, USA). Data were reported as means ± standard deviation (SD) for quantitative variables and frequency (and percentage) for qualitative variables. The chi-square test was used to assess the data. In all statistical analyses, the values of P < 0.05 were considered significant.

Table 1. Description of Demographic and Health-Related Characteristics of Participants

Table 2. Comparison of Mean of Self-Medication Prevalence Between Different Demographic Groups of Subjects

The relationship between health information and self-medication is shown in Table 3, where this behavior was significantly lower in non-smokers (P < 0.05) and those who routinely exercised (P < 0.05).

Table 3. Comparison of the Mean of Self-Medication Prevalence Between Groups of Health-Related Variables

Table 4. Association Between Gender and Awareness Regarding Analgesics Consumption

Table 5 shows different reasons for practicing such behavior, with the main reasons being severe pain (35.3%), followed by having prior experience (15.9%). The main sources of analgesics recommendation were pharmacists (83.5%), followed by pharmacies without prescription (8.9%), home left medication (6.9%), and family or friend (0.8%).

Table 6 shows the data on the use of Ibuprofen (Gelofen), Acetaminophen (Paracetamol), Corticosteroids, Mefenamic acid (Ponstel), and Novafen (Acetaminophen + Caffeine + Ibuprofen) where 51.1% used its alternative, and Acetaminophen. Other painkillers such as Mefenamic acid or Novafen were taken by 25.43% of the subjects, while 8% claimed that they would only practice self-medication under the supervision of a doctor.

Self-medication is an important part of daily self-care behavior and one of the vital issues under debate in healthcare systems (29). It includes the use of herbal or chemical medications, previously prescribed medicines for similar cases, extra medicine at home, or not taking medicine at all (16).

The present study was an attempt to study the prevalence and pattern of self-medication practices in dentistry. As far as we know, this was the first study to examine self-medication practices among dental patients referring to oral health outreach programs in Iran. The prevalence of self-medication in the case of dental problems was found to be as high as 56.1% in the city of Shiraz, which validates the global prevalence reported in the literature, including 80.6% in Nigeria (14), 80% in Saudi Arabia (21), and 67.8% in Cameroon (18). The reported difference concerning self-medication in different countries might be associated with the variation in socioeconomic profiles and demographic characteristics of the samples.

The drugs most frequently consumed by participants were analgesics (77%), followed by antibiotics (22%); this finding is in line with the results of studies conducted in India (48%) (15) and Cameroon (40.9%) (18). The high consumption of the above-mentioned medications might be related to the fact that these medications are considered as OTC drugs and are easily accessible. Moreover, a prior experience might entail the increased request for self-medication.

In the present study, self-medication was more frequent among women than among men, which is consistent with other studies (12, 17, 30). This might be due to the lower threshold for pain in females and higher fear of dental treatments among them (17). It is also worth noting that the majority of females belonged to lower-income groups and were more likely to be unemployed.

This study further revealed that dental pain (35.3%) was the main incentive for self-medication, followed by having prior experience and taking previously prescribed medication, which is in agreement with the findings of studies from Indian (52%) (15) and Cameroonian (54%) (18).

Analgesics (particularly OTC drugs and non-opioids) are among the most frequently used medications globally (22, 23). Despite the relatively low risk associated with most OTC over-the-counter analgesics, potential deleterious side effects can still be observed (26, 37, 38).

With 50% of the study population taking these types of medications, 400 mg Ibuprofen (Gelofen 400) and 325 mg Acetaminophen were the most commonly used medications in the present study, which is in line with a study in Saudi Arabia (21) where 55.4% of the subjects took analgesics. The difference between the present study and the foregoing study is that the latter study investigated the prevalence of self-medication in medical students while our study focused on a general population.

In dealing with their dental pain, 15% of the subjects used Corticosteroid while around 26% made the use of other painkillers such as Mefenamic acid.

In our study population, more than 94% of the participants held the idea that analgesics have no side-effects. Hence, it can be concluded that informing people about the side-effects of analgesics can preclude self-medication.

One of the limitations of the present study was the self-report questionnaire, which might question its overall reliability. Furthermore, despite the fact that this survey covered all the 10 districts of Shiraz, it was hospital-based and might not have included all social strata.

According to the results of this study, the prevalence of arbitrary use of analgesics in Shiraz is high. These results show the need for the public to be more aware of the risks of self-medication.

The authors thank the vice-chancellory for Research of Shiraz University of Medical Sciences for supporting this research (Grant #9489). The authors also thank Dr. Vosough from the Center for Research Improvement of the School of Dentistry for statistical analysis and Dr. Argasi for improving the use of English in the manuscript.

Copyright © 2019, Author(s). This is an open-access article distributed under the terms of the Creative Commons Attribution-NonCommercial 4.0 International License (http://creativecommons.org/licenses/by-nc/4.0/) which permits copy and redistribute the material just in noncommercial usages, provided the original work is properly cited.
download pdf 123.51 KB Get Permission (article level) Import into EndNote Import into BibTex
Number of Comments: 0