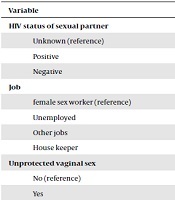 Encouraging people who live with HIV (PWLH) to inform their sexual partner about HIV infection is an effective way to reduce the spread of HIV. It reduces the probability of HIV transmission by avoiding high-risk behaviors.

To determine the predictors of disclosure of HIV status to a sexual partner(s) in PWLH in Khuzestan province, Iran.

The current descriptive, analytical, cross-sectional study was performed on 89 men and 31 women with HIV/AIDS. Data were collected from October 2016 to February 2017. A convenience sampling method was used to recruit participants. Socio-demographic and Kalichman HIV status disclosure questionnaires were used to collect data. The questionnaire was filled by participants. In addition to socio-demographic information, high-risk sexual behaviors, history of drug and alcohol use, number of sexual partners, and HIV status of the partner were also reported by participants. A multivariate linear regression model with a backward strategy was used to determine the predictors of HIV disclosure.

The present study highlighted the need for behavioral interventions, such as providing support and counseling with sexual partners of HIV patients about HIV preventive behaviors, such as condom use, reducing the number of sexual partners, and creation of a positive attitude towards the lives of HIV-positive intravenous drug users to overcome the barriers to reduce high-risk behaviors and drug abuse, through behavioral disease counseling centers.

The prevalence of HIV infection is reported to be around 66,000 in Iran. Since 2010, HIV incidence has increased by 21%, and AIDS mortality declined by 14% (1). Reduced mortality results in a possible increase in risky sexual behaviors and, therefore, higher transmission rates (2). Encouraging people to inform their sexual partners about HIV status is a way to reduce the spread of the diseases. According to the studies conducted in developing countries, the average disclosure rate of HIV infection to current or regular sexual partners is 49% (3). There are no official statistics about this issue in Iran, and previous studies reported that only 38% of people living with HIV (PLWH) are aware of their disease (4).

Disclosure of HIV status to sexual partner through increasing awareness and taking preventive measures, reduces the transmission probability of the diseases. It has two benefits; first, it reduces the number of sexual partners or sexual contacts with those at lower risk of infection. Second, it increases the prevalence of condom use (5). Factors such as condom use prevalence, Antiretroviral Treatment (ART) and Pre-exposure Prophylaxis (PreP) reduce the probability of HIV transmission and, therefore, with the aim of preventing HIV transmission are widely available to the public; Hence, awareness about HIV status of the partner is now of crucial importance (6).

Disclosure of HIV status in addition to reducing the risk of disease transmission provides more opportunities to receive/provide social and spiritual support, improves access to treatment and medical care, increases opportunities for discussion and implementation of programs, reduces the probability of sexual transmission of HIV, and provides more opportunities for accurate and proper planning (3). Therefore, disclosing the status of HIV to sexual partners is a topic that should be considered to prevent and treat HIV. The current study aimed to determine predictors of disclosing HIV status to a sexual partner(s) in PWLH in Khuzestan province, Iran.

This study was done to determine predictors of disclosure of HIV status to a sexual partner(s) in PWLH in Khuzestan province, Iran.

The current descriptive, analytical, cross-sectional study was performed on 89 men and 31 women with HIV/AIDS. Data were collected from October 2016 to February 2017. Participants were included in the study based on a positive serologic test, having a case file in the Behavioral Disease Counseling Center, and meeting the inclusion criteria.

Questionnaires were completed by the participants in a completely private environment. To observe the confidentiality of information (mainly participants' names), a coding system was used in the questionnaires.

A socio-demographic information form and an HIV status disclosure questionnaire, which was completed through self-report, were used to collect information.

The socio-demographic form included items on the age, gender, income level, level of education, race, marital status, occupation, factors related to disease (stage and time since onset of the disease) and behavioral factors (number of sexual partners, sexual behavior, number of unprotected vaginal, anal and oral sexual intercourses). In addition to demographic and clinical information, the participants were asked to report any high-risk sexual behaviors, history of other diseases or having sexually transmitted infections other than HIV, receiving or paying money for sex, history of intravenous drug use, history of drug, alcohol, methamphetamine, or cocaine abuse, number of sexual partners, HIV status of the partner (positive, negative, unknown or else), and specific to the men, history of homosexual activities.

The HIV status disclosure questionnaire developed by Kalichman was used to collect information regarding the HIV status and informing partners. To investigate its scientific validity (validity), first, the forward/backward translation method was used. Then, in order to obtain comments and information, changes were made. 10 items of the questionnaire were rated using a 4-points Likert scale (i.e., totally disagree, disagree, agree, and completely agree), that higher scores indicated more disclosure of HIV status (20).

All patients who had medical records in Ahvaz Behavioral Counseling Center were included in the study.

Data analysis was performed using SPSS version 24. Descriptive statistics, including frequency, percentage, mean, and standard deviation, were used to describe the socio-demographic, clinical, sexual behaviors, substance use, and overall HIV status disclosure scores. To determine the association between socio-demographic characteristics and the total score of HIV disclosure, bivariate tests (i.e. t-test and one-way analysis of variance (ANOVA)) were used. To control confounding factors, all variables with P < 0.05 were entered into the multivariate linear regression model with a backward strategy. All assumptions of multivariate linear regression, including normality, residuals, homogeneity of variance, collinearity of outliers, and independency of residuals, were examined.

Regarding the history of HIV risks, less than half of the participants (45%) had a history of intravenous drug use (IDUs), 3.3% had a history of STDs, sex for money, and homosexual intercourse. About one-fourth of participants (26.7%) were women who were infected by their husbands (i.e. did not have risky behaviors); about one-fifth (19.4%) had more than one HIV risk factor.

Table 1. Socio-Demographic Characteristics in Men and Women with HIV/AIDS

Table 2. Personal-Social Predictors of HIV Infection disclosure in Men and Women with HIV/AIDS Based on Multivariate Linear Regression Model

In the current study, employment status was one of the variables that had effects on HIV disclosure. The rate of HIV disclosure in employed people was higher than unemployed and female sex workers. A study conducted by Bidaki et al. showed that employed PWLH feel more social acceptance than others (21), it can explain why they disclosed the disease.

In this study, recurrent consumption of narcotic drugs was one of the variables that influenced the disclosure of HIV. The rate of exposure to HIV in drug and alcohol users was lower than those who did not use drugs or alcohol. Wei et al. showed that there is a strong positive association between non-disclosure of HIV infection before sex and drug abuse (27). Although in many epidemic regions, HIV prevalence is high among IDUs, but few studies are conducted on the HIV disclosure rate among them (3).

Like other research, the current study also had limitations. First, the participants were clients of a behavioral disease counseling center, so generalization of the results to all PWLH should be with caution, particularly those who are not seeking care or medication. In addition, HIV-related data were obtained through self-report. Thus, some factors may not have been truly reported due to social orientations. Future studies are recommended on more diverse and larger populations of women. Also, interventional studies can be performed based on the findings of the current study.

More research is needed to identify the factors associated with disclosure of HIV status in Iran. The present study highlighted the need for behavioral interventions, such as providing support and counseling with sexual partners of HIV patients about HIV preventive behaviors, such as condom use, reducing the number of sexual partners, and creation of a positive attitude towards the lives of HIV-positive IDUs to overcome the barriers to reduce high-risk behaviors and drug abuse, through behavioral disease counseling centers.