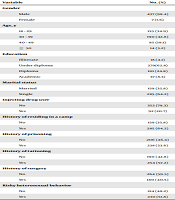 The current cross sectional study was conducted on 444 drug abusers engaged in the recovery process residing in 12 rehabilitation camps in Kurdistan province, Iran in 2018. The potential risk factors were collected through a checklist and assessed mainly via a standard validated questionnaire. Participants were also tested for anti-HCV, HBsAg (hepatitis B virus surface antigen), and anti-HIV IgG. Data were analyzed by descriptive methods and logistic regression model in SPSS version 21.

Totally, 444 drug abusers, 98.4% male and 1.6% female, included in the study, out of which 64 (14.4%) subjects had HCV infection and two (0.4%) had coinfection with HBV and HIV based on the results of the enzyme-linked immunosorbent assay (ELISA). Higher age, single marital status, history of drug injection, and tattooing were significant factors related to HCV infection.

The obtained results demonstrated that seroprevalence of HCV among addicts engaged in the recovery process in rehabilitation camps was high. High prevalence of HCV and risk of infection transmission to other addicts in camps should be considered as one of the concerns of the health system in Iran.

Addiction is one of the most important problems throughout the world caused by various social, psychological, and biological factors (1). According to World Health Organization (WHO) reports, it is estimated that 230 million people worldwide have a substance abuse problem (2). Due to proximity to Afghanistan, Iran is a target country for substance dealers and recent studies show increasing prevalence of drug abuse in Iran (3, 4). Based on a network scale-up study, the most common types of drugs used in Iran are opium, opium dross (shireh), and crystal methamphetamine (5). Officials in Iran are always seeking solutions to control addiction in the community. Establishment of medium-term residential addiction treatment centers (camps), narcotics anonymous (NA), and methadone maintenance therapy centers, publicly and privately, are three main interventional programs or approaches to cope with addiction in Iran.

Based on the report of Iran’s Deputy Drug Control Headquarters, by the end of 2016 more than 5233 authorized camps are dedicated to addiction treatment and harm reduction operationally in Iran (6). Camps are important centers to treat addicted individuals and tend to operate in both residential areas and the medium-term (30 - 90 days). The main approach of these camps is to focus on collaboration of peer and self-help groups and their services are usually offered by recovered individuals (7). Although the main goal of these centers is recovery of addicts, there is no strong evidence about their success. Additionally, the gathering of high-risk individuals at the camps has the risk of transmitting some infectious diseases among drug users that are always at risk of developing blood-borne viruses including viral hepatitis B, C, and HIV due to their potential high-risk behaviors and other hazards that threaten them (6). It should be noted that little attention is paid to the service quality provided at substance abuse treatment camps and their role in assisting drug addiction recovery.

Based on the opinion of General Director of Drug Abuse Prevention and Treatment Office, Iran’s Welfare Organization, little attention is paid to the quality of services provided at camps and their role in assisting the recovery of people attending such centers; in contrary, the camps officials claim to implement abstinence-based treatments (7). In addition to the need for further evidence about effectiveness of camps as an approach to treat drug abuse, a camp is one of the most important cumulative sites that can contribute to the transmission of infectious diseases, especially the ones transmitted through blood and secretions. Additionally, addicts referring to these camps are at high risk for HIV and hepatitis B and C infections. Based on the available scientific evidence, high-risk behaviors that cause transmission of blood-borne and sexually transmitted diseases are more common in addicts than in the general population (8, 9). Despite the mentioned facts, camps are still essential to treat addiction in Iran and the systematic surveillance of major communicable diseases in these centers seems to be essential and can help health officials to evaluate preventive measures used to control communicable diseases and design related interventions. To the authors’ best knowledge, there is no sufficient evidence regarding the prevalence of blood-borne diseases in camps in Iran.

The present study aimed at evaluating the seroprevalence of hepatitis C virus (HCV), hepatitis B virus (HBV), and human immunodeficiency virus (HIV) infections in residents of camps in Kurdistan province, Northwest of Iran.

The current cross sectional study was conducted on addicts kept in rehabilitation camps in Kurdistan province, Northwest of Iran in 2018. The study data were gathered in two consecutive steps. First, demographic data and required information about history of risky behaviors in the study participants were gathered through a face-to-face questionnaire-based interview. The employed questionnaire to obtain risky behaviors was a form of behavioral surveillance surveys (BSS) validated (10) and used in a national study (11). Interview and pretest counselling was performed in a private room on each site. A trained interviewer used a structured questionnaire to gather the data on sociodemographic characteristics and main variables related to HCV, HBV, and HIV such as substance abuse, risky sexual behaviors, the number of partners, condom use, tattooing, history of surgery, and imprisonment. In the second step, a serum sample was used to determine the status of the participants in terms of HCV, HBV, and HIV infections. All experiments were conducted in a central laboratory located in Counseling Center for Behavioral Diseases in the center of province, Sanandaj.

In order to minimize the error in data entry, after completion and collection of questionnaires at each camp, data were transferred to the statistical software by a trained person. In cases of deficiencies in completing the questionnaires, defective items were corrected by telephone follow-up from the site of the sampling. The researchers received the test results from the laboratory at the Counseling Center for Behavioral Diseases in the province in accordance with the questionnaires. The results of the experiments were attached to the questionnaires according to the specified codes. After attaching these laboratory results, determining the status of HCV, HBV, and HIV infections in each subject, final information for all participants was provided. Then data were entered into STATA software version 13 and analyzed. In the data analysis, in addition to using the descriptive methods to summarize the demographic and independent variables, the prevalence of each of the investigated infections was calculated. In addition to univariate analysis and calculation of unadjusted odds ratio (OR), logistic regression model was employed to determine possible risk factors associated with HCV infection as the main dependent variable in the current study, after controlling potential confounders. An alpha of 0.05 was used as the cutoff point for significance, and P values lower than 0.05 were considered statistically significant in all analytical analyses.

The study protocol was reviewed and approved by the Research Ethics Committee of Kurdistan University of Medical sciences (code No. IR.MUK.REC.1396.352). Before collecting the required data and taking the blood samples, the interviewer introduced the study objectives, and a written informed consent was obtained from each participant. Studied subjects were also assured that all information would remain confidential. They were informed that their participation was voluntary and that participants were also free to discontinue the study at any time.

Table 1. Demographic Characteristics and History of Risky Behaviors Among the Studied Participants

Table 2. Prevalence of HCV, HBV, and HIV Infections Among the Studied Subjectsa

Since the prevalence of HBV- and HIV-positive cases in the studied participants was very low, in the statistical analysis, the relationship between the independent variables with the prevalence of HBV and HIV infections was not modeled, but logistic regression model was used to assess the relationship between studied independent factors and HCV infection. The results of logistic regression modeling including values of OR, 95% CI for OR, and P value are shown in Table 3.

Table 3. Logistic Regression to Assess the Relationship Between the Studied Factors and HCV Infection

As shown in Table 3, after controlling other variables, the most important variable associated with HCV infection was the history of drug injection; therefore, the risk of having a HCV infection in subjects with a history of drug injection was 22.97 times higher than those of other individuals (P < 0.001). The age difference of the subjects was also significant; therefore, with one year increase in age, the chance for HCV infection significantly increased by 1.14 times (P < 0.001). Also, the risk of HCV infection in single participants and the ones with a history of imprisonment was 3.13 and 2.77 times higher, respectively (P < 0.05).

According to the two review studies in Iran, prevalence of HCV infection in general population is estimated less than 1.7% (ranging from 0.08% to 1.6%) (14, 15). In addition to the HCV, the residents of the studied camps were also screened for HBV and HIV infections. Based on the obtained results, prevalence of these two infections was low; therefore, two cases were found positive for HBV and two cases had HIV infection. It seems that lower prevalence of HBV in Iran can be attributed to the widespread use of HBV vaccine in infants, children, and high risk groups such as healthcare workers, prisoners, barbers, and patients with thalassemia and hemophilia, and also the ones undergoing hemodialysis (16, 17). Lower prevalence of HIV infection can also be attributed to the spread of harm reduction programs including the distribution of free syringes and needles among addicts, as well as low prevalence of HIV in the general population (11, 18, 19).

Although, the prevalence of HCV among general population of Iran was low in comparison with other developing countries due to strict plan for HCV infection screening prior to any blood transfusion, which started at national level in 1996 (20), prevalence of HCV infection among some vulnerable groups such as IDUs and prisoners is higher than general population. Based on the current study data, in addition to the role of injecting drug and needle sharing as the main risk factor for HCV infection, history of imprisonment was a predicting factor; therefore, the chance of HCV infection in individuals with a history of imprisonment was 7.62 (3.53 - 16.41) times higher than the others.

The other significant risk factor for HCV infection in the current study was advanced age. It should be noted that more diagnosed cases with HCV and HIV infection in Iran can be attributed to previous outbreaks in IDUs during the years of 1998 - 2005 and before conducting widespread harm reduction programs; therefore, it can be concluded that during recent years and following implementation of nationwide harm reduction programs, the rate of transmission of HCV and HIV infections among vulnerable groups such as IDUs reduced (21, 22).

In general, the most important causative factor for HCV in Iran was needle sharing among IDUs and this vulnerable group was one of the main groups attending the camps. The large number of drug addiction camps in Iran and the risk of transmission of HCV and HIV among addicts residing in them is one of the main ongoing concerns of health officials and policy makers. The implementation of preventive measures and sufficient supervision on the activities of these camps and conducting studies to assess the effectiveness of such camps in Iran is an undeniable necessity.

To the authors’ best knowledge, it was the first project that assessed the prevalence of main blood-borne infections (HCV, HBV, and HIV) in camps, the medium-term residential addiction treatment centers in Iran. Since all residents of the camps were examined at the same time, there was no specific limitation in terms of methodology in the study.