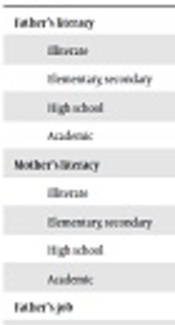 Use of Smokeless Tobacco Among Students in the City of Chabahar: A Cross-Sectional Study

The purpose of this study was to determine the prevalence of types of smokeless tobacco use between students in the city of Chabahar. A total of 105 students were selected from the schools of Chabahar city. The sample size was calculated using the G*Power software. For a questionnaire by the test-retest exam for knowledge and attitude structures, the reliability of the test (Pearson correlation coefficient’s) was 98% and 94%. The Cronbach alpha of these structures was about 74%. The CVR for these structures was 93% for knowledge and 88% for the structure of the attitude. Data was analyzed using the SPSS16 software. In this study, 14 students (13%) had a history of previous use and 48 students (45.7%) reported having had tobacco use at least once, 30 days before studying. The Pearson Correlation Test indicated a significant relationship between smokeless tobacco use with the family number (-0.224), mother's literacy (0.219), and father’s literacy (0.224). The number of smokeless tobacco users who had consumed at least once in the last month of the study were Pan 26 (24.8%), Gutkah 9 (8.6%), and Biti 5 (4.8%). The results of the study show that the prevalence of smokeless tobacco use in students around the city of Chabahar is high.

Smokeless tobacco use, as a behavioral habit has caused a lot of health risks for people. One of these risks is the loss of soft tissue and tooth health, cancer, and so on. In recent years, many studies have shown an increase in smokeless tobacco and all kinds of tobacco use (1, 2).

At about 250 million smokeless tobacco users, 10% to 20% percent of users are students aged 13 to 15 years. An estimated 30% to 40% outbreak has been reported among students in some Asian countries (3, 4). Smokeless tobacco enters through the south-eastern border of Iran, due to its proximity to Pakistan; in border regions it due to communication of the people of the two countries. On the other hand, there are various beliefs about the use of smoke-free tobacco in these areas, sometimes these beliefs are false and incorrect (5, 6). The rate of consumption among Bangladeshi settlers in New York is reported to be between 45% to 67%, although they were aware of the dangers of consumption (4). Another study found a strong link between tobacco use and future dependence on these substances. Approximately 34% reported having started taking this drug since childhood (5). In a study conducted on students in Sistan and Baluchestan, it was shown that 11% of students had a history of consumption, of which 4.5% were recreational users and 6.3% were permanent users (7).

Considering the harmful effects of a pan and the lack of studies in this field in the country, in this study, we aimed to determine the prevalence of types of smokeless tobacco use between students around the city of Chabahar.

The comments and articles of experts such as Fischer (9) and Ajzen and Drive’s (10) were used to create a questionnaire (11, 12). In this research, the views of 15 health education specialists were used for the validity of the questionnaire, content validity was used. The CVR for these structures was 93% for knowledge and 88% for the structure of the attitude. As a result, our questionnaire had an acceptable reliability and validity.

Table 1. Demographic Information of Students and Types of Smokeless Tobacco Use

According to the above table, the Spearman correlation test indicates a significant non-linear relation among smokeless tobacco consumption with the family number, mother's literacy, and father's literacy (P value < 0.05) (Table 2). In this study, 14 students (13.3%) had already consumed as recreational and 48 students (45.7%) reported having had smokeless tobacco use at least once, 30 days before studying (Table 1). In another study in Iran, 19.9% of students reported having smokeless tobacco use at least once, 30 days prior to the study. This indicates the high involvement of students in the use of this substance in Sistan and Baluchestan (6, 13, 14). Our study showed that smokeless tobacco users such as Pan 26 (24.8%), Gutkah 9 (8.6%), Biti 5 (4.8%), and NAS 4 (3.8 %) had used at least once in the last month of the study (Table 1). In the study by Jalilvand et al., held at Sistan and Baluchistan University students, results showed that Pan (7.63%) was the form of smokeless tobacco further used, followed by Nas (3.38%), about 21 (78%) Paan users belonged to the college of Engineering, while 7 (52%) of the Nas users studied psychology, coinciding with the relationship of our study to a certain extent (7).

In South Africa, 1.3% of participants reported smokeless tobacco use at least once, 30 days before the study (15). In addition, it was also 6.4% in Karachi, Pakistan (16). Contrary to our study, these studies have been less frequent than consumption in the last 30 days. In our country, there has not been enough research into the use of smoke-free tobacco. Therefore, we consider this point as a limitation of our study. In the study by Rakhshani and colleagues, poor awareness and attitude have reported, which almost confirms the results of our study (2, 17). In another study, Fattahi et al., assessed the impact of education on prevention and also reported low knowledge about pan in students (18, 19). To obtain more complete results, future research is needed in Sistan and Baluchistan, more specifically among students around the Chabahar city (20).

We suggest that another study be conducted in non-educational settings, to see tangible and realistic reports from students and other people. The main limitation of our study was that our students were male, we suggest that studies be conducted for female students as well. Another limitation of our study was that, despite the choice of two schools in the two different districts, more students were living in the suburbs of Chabahar.

Overall, the results of the study indicated that the prevalence of smokeless tobacco use in students around the city of Chabahar is high, which requires appropriate interventions to prevent it.

Copyright © 2019, Author(s). This is an open-access article distributed under the terms of the Creative Commons Attribution-NonCommercial 4.0 International License (http://creativecommons.org/licenses/by-nc/4.0/) which permits copy and redistribute the material just in noncommercial usages, provided the original work is properly cited.
download pdf 103.34 KB Get Permission (article level) Import into EndNote Import into BibTex
Number of Comments: 0