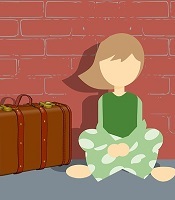 Image by mohamed Hassan from Pixabay

Homeless women are at high risk of sexually transmitted infections (STIs) due to their adverse early-life experiences.

This study aimed to examine the association between adverse early-life experiences and the risk of acquiring STIs among homeless women in Tehran.

A descriptive-analytical cross-sectional study was carried out in 2014. The study recruited 241 homeless women through quota sampling from the drop in centers and shelters affiliated to a local welfare organization in Tehran, Iran. Data were obtained using questionnaires on demographics and adverse early-life experiences. Blood and urine samples were tested for human immunodeficiency virus (HIV), herpes simplex virus 2 (HSV-2), syphilis, Chlamydia trachomatis, and Neisseria gonorrhea. Descriptive statistics including frequency were calculated for all variables. To analyze the data at a significance level of 0.05, binary logistic regression was used.

Homeless women had high rates of adverse early-life experiences and overall 41.49% of them were affected at least by one STI. Future interventions should focus on the reduction of adverse early-life experiences, especially during adolescence, including the promotion of adolescent empowerment, promotion of condom use, and improvement of awareness of STIs.

Sexually transmitted infections (STIs) are one of the most common infections in adults and a major global health concern (1). STIs can cause acute conditions such as cervicitis, urethritis, genital ulceration, pelvic inflammatory disease, chronic pelvic pain, ectopic pregnancy, infertility, neurological disorder, and cardiovascular diseases in adults, neonatal death, premature delivery, blindness, and severe disability in infants (2). Several risk factors and markers are associated with infections, including individual factors (3), social and institutional contexts, in particular unsafe sexual behavior, drug use, discrimination and social inequality (4, 5), poor access to healthcare services (6), and prevalence of infections in sexual networks (7, 8). All these factors strongly affect homeless women in Iran (9) and in other countries (5, 6, 10).

Homeless women are considered a hidden population of Iranian society since there are no accurate statistics regarding their population (11). There is little information on the prevalence rate, risk factors, and other aspects of STIs to guide specific preventive measures for homeless women (12).

Given the significance of homeless women in the Iranian society and the lack of previous research, this study was conducted to examine the association between the risk of STIs and adverse experiences during childhood and adolescence among homeless women in Tehran.

A descriptive-analytical cross-sectional study was carried out in 2014. The study recruited 241 Iranians homeless women aged 15 - 45 years using quota sampling from 12 drop-in centers and night shelters affiliated to the Welfare Organization in Tehran. More details about the study methodology are presented elsewhere (13). The sample size was calculated with a confidence level of 0.95, an estimated STI prevalence of 10% (14), and a d value of 0.04. The minimum required sample size was 216. However, to reduce the effects of measurement errors (related to blood sampling and testing), we recruited 245 women. Four patients were excluded due to problems with biological samples.

Data were collected using questionnaires and biological sample testing. The questionnaires were developed based on the findings of a qualitative study and a review of the literature (15). Demographic data included age, level of education, birth order, marital status, having children, and source of income. Adverse early-life experiences in the questionnaire included school leaving, history of sexual, physical, and psychological abuse, running away from home, childhood labor, regular smoking, drug use, alcohol use, imprisonment history and criminal records, immigration to Tehran, having tattoos, premarital sexual activity, marriage, divorce, Nikah mut‘ah (temporary marriage), having multiple sex partners, and having unprotected sexual relationships under 18 years of age.

The face and content validity were evaluated in both quantitative and qualitative methods. In order to assess the content validity quantitatively, the content validity index (CVI) and the content validity ratio (CVR) were calculated (16). The CVR and CVI of the questionnaire were 0.91 and 0.94, respectively. Test-retest and Kuder-Richardson correlation were used to determine the reliability of the questionnaire. Test-retest and the Kuder-Richardson correlation values were obtained as 0.81 and 0.70, respectively. The questionnaires were completed and a unique ID number was assigned to each participant. Based on ID numbers, we collected biological samples from participants in a private room for testing. Blood and urine samples were sent for serological testing to Avicenna Research Institute affiliated to the Academic Center for Education, Culture, and Research (ACECR), Tehran, Iran.

Under sterile conditions, 4 mL of venous blood was collected from each study participant. Blood samples were centrifuged using Eppendorf™ refrigerated centrifuge (manufactured in Germany). Sera were separated from samples and all samples were transferred to the laboratory for testing.

Samples were tested for HIV using the enzyme linked immunosorbent assay (ELISA) method and DS EIA HIV Ag/Ab Screen kit (manufactured in Italy), which had a 100% sensitivity and 99.6% specificity. ELISA tests were performed following the instructions of the manufacturer. All positive samples were retested using the Western blot test.

Samples were tested for HSV-2 using the ELISA method and Euro Immune kit (manufactured in Germany), which had a 95.7% sensitivity and 93.1% specificity. ELISA tests were performed in accordance with the instructions of the manufacturer.

Samples were tested for the detection of Treponema pallidum using rapid plasma reagin (RPR) test and Bionic kit (manufactured in Germany) with a sensitivity of 78% and specificity of 98%. Specimens with high agglutination, low agglutination, and no agglutination were considered positive, poor positive, and negative, respectively. Positive cases were evaluated by the confirmatory assay of fluorescent treponemal antibody-absorbed test and the results were interpreted.

Self-collected first void urine (10 mL) in a sterile plastic container was taken from all participants. These specimens were transported to the laboratory without adding a transport medium and stored at 4°C, and then examined within a maximum period of seven days.

To detect Chlamydia trachomatis and Neisseria gonorrhea, polymerase chain reaction (PCR) was used. DNA was extracted using the Chelex®-extraction method. The detection and examination of PCR products were performed in UV light.

Participants were provided with clear explanations about study purpose and background, the voluntariness of participation in and withdrawal from the study, and confidential management of the data. All of them provided their written informed consent. All aspects of this study were approved by the Ethics Committee of the Avicenna Research Institute (with the code of 93.1272). Each study participant was given a gift equal to $3. Participants had access to the results of serological testing at will.

The data were analyzed using the Statistical Package for Social Sciences (SPSS) version 16.0 software (SPSS Inc., Chicago, IL., USA). Logistic regression was used to estimate the effect of adverse early-life experiences of homeless women on the prevalence of STIs with two dichotomous dependent variables. The results were presented as odds ratios, which estimate changes in the odds of the outcome variable for each unit change in the independent variable. For dichotomous independent variables, the odds ratios measured the effect of being in one category compared to the other. If the odds ratio was less than unity, it indicated a decrease in the odds of the outcome while odds ratios of greater than unity indicated an increase in the outcome. A significance level of less than 0.05 was required to interpret the results.

Table 1. Demographics of Homeless Women Participated in the Study (N = 241)

Table 2. Prevalence of STIs in the Study Participants

All homeless women stated that they had at least two adverse experiences in their childhood and adolescence. Moreover, 239 (99.2%) women had three or more adverse experiences in their childhood and adolescence. Adverse experiences during adolescence in STIs-affected and STIs-unaffected women are presented in Table 3. In order to predict the risk of STIs in homeless women and to eliminate possible confounding variables, logistic regression models were designed. Sexual abuse, running away from home, drug use, alcohol use, imprisonment history and criminal records, premarital sexual activity, divorce, Nikah mut‘ah, having multiple sex partners, and having unprotected sexual relationships were risk factors for acquiring STIs in homeless women (P < 0.05). The results of logistic regression analysis, odds ratios (ORs), and 95% confidence intervals (CIs) are presented in Table 3.

Table 3. Logistic Regression for the Association Between Adverse Early-Life Experiences and STIs Among the Study Participants (N = 241)

Table 4. Logistic Regression for the Association Between STIs and Age at the Onset of Substance Use and Sexual Activity in the Study Participants

Based on the result shown in Table 4, with each one-year delay in the onset of substance use and sexual activity, the chance of acquiring STIs decreases by 38% and 23%, respectively.

In this study, over one-fifth (22%) of homeless women reported a history of childhood sexual abuse and this was a strong predictor of acquiring STIs. According to Sweet and Welles study, women who were sexually abused, sometimes or frequently, had significantly higher risks of HIV/STI acquisition (1.5 - 4.2 times) than those who were not abused (19). Childhood sexual abuse was associated with higher rates of risky sexual behaviors such as sexual intercourse in exchange for illicit drugs (cocaine, heroin), arrests due to prostitution, and sexual intercourse with a casual sex partner in adolescence, which exposed them to STIs (20, 21).

In this study, homeless women with drug and alcohol use during their adolescence were 3.93 and 4.12 times more likely to become infected with STIs. Besides, based on these results, the early onset of drug use increases the risk of STIs. In line with this study, previous studies showed drug use and alcohol use were prerequisites for high-risk behaviors (27), including injecting drug use and needle sharing (28), unplanned sex with new partners (29), sex with multiple partners (30), condomless sex (31), and trading sex for drugs or money (32), which exposed the person to the risk of STIs (27).

Our results revealed homeless women who had imprisonment and criminal records during adolescence were 2.72 times more likely to become infected with STIs. In Khan et al. study, those who were incarcerated had an approximately 30% increased risk of current STIs (33). Prisons are known as high-risk environments for the prevalence and spread of HIV/STIs due to a high level of risky behavior in prisons (20, 33). Although those serving a sentence may have been infected prior to entering prison, undoubtedly, there exists a risk for them to get infected in prison through unsafe sexual activity (including sexual intercourse between persons of the same sex), rape, unsafe tattooing, blood exchange rituals, and exchange of injection equipment and other sharp instruments.

Our study found that one-fourth of homeless women experienced divorce during adolescence and this issue increased the risk of acquiring STIs by over 3 times among them. In a study divorce was one of the most important gynecological and reproductive risk factors for acquiring HIV (OR = 4.06) (25). Studies showed divorce is directly associated with high-risk sexual behaviors including prostitution, having multiple sexual partners, lack of condom use (35), extramarital sex (36), and the chance of acquiring HIV (37).

In the present study, almost one-fourth of homeless women engaged in Nikah mut‘ah during adolescence. Homeless women with Nikah mut‘ah experience were over 4 times more likely to become infected with STIs. Accordingly, the HIV prevalence was the highest among persons who engaged in temporary marriage or cohabitation in a polygamous relationship (37, 38). In this regard, Dibua stated that traditional sexual behaviors (concubinage, pre- and -extramarital sex) promoted practices and HIV/AIDS risk behaviors such as prostitution or sex work, namely multiple sex partnering (38).

Our study had some limitations. Homeless women are highly stigmatized in the culture of Iran and are hard-to-reach for research purposes. Most of these women were initially reluctant to cooperate with the research team because of the sensitivity of the subject. Therefore, the researcher was present at the centers for a long time and held training and consulting classes to treat them. The long-term interaction between the researcher and these women convinced them to participate in the study. The cross-sectional nature of this study means that the established associations do not necessarily indicate causality. The most important limitation of this study was recall and self-reporting.

The authors would like to thank all women who kindly agreed to participate in this study.