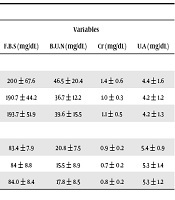 Fetuin-A is a glycoprotein known as a biomarker for diabetes risk. Adipsin or complement factor D (CFD) plays a role in glucose tolerance, and metabolism.

This study aimed to investigate the concentration of fetuin-A and adipsin in patients with type 2 diabetes mellitus (T2DM) and healthy subjects.

This case–control study was carried out on 43 patients with T2DM and 41 healthy subjects. Biochemical parameters were determined. Fetuin-A and adipsin levels were measured using ELISA kits. Lipid profile and biochemical factors were measured by spectrophotometric methods.

Fetuin-A, is a glycoprotein which is known as a biomarker for diabetes risk (1, 2). It seems that high levels of fetuin-A can be related to insulin resistance (IR) (3, 4). A relationship has been observed between high fetuin-A level and impaired glucose tolerance, metabolic syndrome and lipid profile (5, 6). IR is important in pathophysiological mechanisms of T2DM, which may contribute to the development of dyslipidemia, hypertension and vascular complications (7, 8). Adipsin is the major protein of adipose cells. It is paradoxically reduced in many animal models of obesity and diabetes which are known to be the complement factor D (CFD) (9, 10). It catalyzes the rate-limiting step of the alternative pathway of complement activation (11, 12). Adipsin mRNA abundance reduces during the glucose infusion, which makes a hyperglycemic, hyperinsulinemic status (9). It is reported that adipsin is useful in maintaining β cell function (12, 13). There is association between obesity, adipose inflammation and malfunction of β cells (13). Nevertheless, the role of fetuin-A and adipsin in patients with T2DM has not been fully studied.

This study aimed to investigate the concentration of fetuin-A and adipsin in T2DM patients and healthy subjects. Besides, their relationship with lipid profile, and biochemical factors were studied.

In this case-control study, 43 subjects; 13 males and 30 females (mean age 58.5 ± 9.5 years) referred at Diabetes Clinic Center of Ali-Asghar, a general hospital in Zahedan University of Medical Science (ZAUMS), Iran. All patients were enrolled during the period of November to December 2017. They referred to the diabetes clinic center for follow up of treatment regularly.

The clinical criteria for diabetes of patients were approved by an endocrinologist regularly. According to the definition of World Health Organization (WHO), criteria for diagnosing diabetes include fasting blood sugar (FBS) level equal to or greater than 126 mg/dL, 2-hour oral glucose tolerance test (OGTT) result equal to or greater than 200 mg/dL, and hemoglobin A1c equal to 6.5% or higher. T2DM was medically confirmed by a specialist physician. The patients were monthly referred to a diabetes clinic for treatment and health care. All patients completed the study without any problem. In control group, 41 healthy subjects including 18 males and 23 females (mean age 57.5 ± 11.3 years) were selected which matched the case group regarding sex and age. The control group included healthy persons with no medical histories (diabetes, hypertension, heart disease, renal and liver disease malignancy, endocrine disorders) and/or addiction. Exclusion criteria for both groups were; BMI ≥ 40 kg/m2, age less than 18 years and absence of any systemic disease. All eligible patients had a history of T2DM as follows: 14 patients (32.6%) less than 6 months, 18 patients (41.9%) between 6 months to one year, and 11 patients (25.6%) more than two years. They were treated by oral glucose-lowering medications. The ZAUMS board of ethics approved the study protocol (Code number; No. 7480; 25, October 2017). So, all aims of the protocol were clearly elucidated to the subjects.

The gender, age, height, and body weight, of participants were recorded. Weight and height were measured while subjects were wearing light clothes and with bare feet, using a Detector scale with the accuracy of 0.1 kg for weight and 0.5 cm for height. Body mass index (BMI) was calculated as body weight in kilograms divided by height in meters squared.

After 10 - 12 hours overnight fasting, blood samples were collected at 8:00 a.m. from the two groups. Afterwards, blood samples were centrifuged at 1500 x g for 10 minutes. Total cholesterol, LDL-C, HDL-C and triglyceride were measured by applying a colorimetric method using Autoanalyser RA-1000 (Pars Azmoon kits, Tehran, Iran), along with HbA1c, in all subjects. Glucose (FBS), blood urea nitrogen (BUN), creatinine, and uric acid levels of the participants were also determined using photometric method in participants. The remained samples were stored at -70°C for further analysis.

All data are presented as mean ± standard deviation. Comparisons between two groups were analyzed by t-test or Mann-Whitney U-test. Pearson and Spearman correlation coefficients were used for assessment of parametric and non-parametric correlations respectively. All statistical analysis was performed using SPSS software (version 18 for Windows, Chicago, USA). Data were considered significant at a level of P < 0.05.

Table 1. Mean Serum Levels of Fetuin-A, and Adipsin Levels in the Studied Groupsa

aValues are expressed as mean ± SD and (range).

aValues are expressed as mean ± SD and (range).

No correlation was observed between fasting glucose levels and lipid profile. However, there was a significant relationship between fasting glucose levels and creatinine (r = 0.3, P < 0.03), and BUN (r = 0.5, P < 0.001). In addition, a significantly negative correlation was observed between the two groups in terms of uric acid (r = -0.5, P < 0.001) in the diabetic group.

The results showed that level of fetuin-A decreased significantly in patients compared to healthy subjects (627.2 ± 649.0 mg/dL vs. 789.8 ± 716.7 mg/dL). Similar to our study, it has been reported that fetuin-A level was lower in persons with T2DM (14). Horng‐Yih et al. showed serum fetuin-A concentrations in newly diagnosed type 2 diabetes (NDD) and impaired glucose tolerance (IGT) groups were higher than normal glucose tolerance (NGT) (341 ± 88, 335 ± 90, and 300 ± 75 μg/mL, respectively). These results suggested, serum fetuin-A levels were positively related with IGT and NDD in subjects without nonalcoholic fatty liver disease (NAFLD) (5). It was also found that plasma fetuin-A level was elevated in patients with T2DM (15). It has been reported that fetuin-A caused insulin resistance by inhibiting insulin receptor autophosphorylation (4). Insulin resistance is an important factor in development of T2DM complications. Besides, insulin resistance is represented to be the reason of dyslipidemia and hypertension complications (8). Nevertheless, the function of fetuin-A and its contribution in insulin resistance is unclear. According to several studies, contradictory results have been reported based on the role of fetuin-A in complications of diabetes (6). In the present study, there was not a significant correlation between fetuin-A with other biochemical and demographic parameters. No relationship was observed between fetuin-A level and such factors as triglyceride, cholesterol, HDL levels, and BMI in patients with T2DM. Similar results have shown that there was not a significant correlation between different parameters such as BMI, blood pressure, total cholesterol, triglyceride, and HDL with serum fetuin-A in the diabetic patients (P > 0.05) (16).

Our study population included patients with advanced diabetes in terms of duration and presence of different variations in biochemical factors and other complications from six months to more than two years. It has been reported that higher levels of fetuin-A was associated with the improvement of cardiovascular disease (CVD) in the general population. It is suggested that high fetuin-A levels can cause peripheral arterial disease (PAD) (17). On the other hand, lower fetuin-A levels were associated with higher CVD risk in individuals without diabetes. Even though, there was no significant correlation in patients with T2DM. However, there was a trend toward higher CVD risk with higher fetuin-A levels (18).

Adipsin level showed a decrease in diabetic patients compared to control group (13 ± 11.7 mg/dL vs.18.0 ± 13.4 mg/dL, P = 0.001). These results were confirmed by Legakis et al. who reported that the circulating adipsin levels decreased in patients with T2DM (74.30 ± 12.51 pg/mL vs. 117.1 ± 5.03 pg/mL, P < 0.0001) (19). It is also reported that adipsin is a protein of adipose cells, but paradoxically declines in many animal models of obesity and diabetes (9). It has been reported that T2DM patients with β cell failure are deficient in adipsin (12). In the present study, it was also observed that adipsin level was inversely related with fasting glucose levels (r = -0.18, P = 0.08). In addition, there was not a correlation between adipsin level and lipid profile including; triglyceride, cholesterol, LDL, HDL, and also biochemical factors such as uric acid, creatinine, and B.U.N in diabetes. Adipsin has an important role in β cell function. In an experimental study, it was shown that genetic lack of adipsin occured with glucose intolerance due to insulin deficiency. In addition, administration of adipsin to diabetic animals which were hyperglycemic increaseed insulin secretion (12). Adipsin increases differentiation of adipocytes. It has been reported that the adipsin-acylation stimulating protein (ASP) system affects the regulation of triglyceride metabolism in adipocytes. It has also been shown that this system increases the level of triglyceride synthesis in adipocytes (9). Moreover, adipsin can act as a lipostatic signal based on the reduced expression of the adipsin gene and circulating protein levels in obese animals that was not supported in clinical data (20).

T2DM patients may be risk stratified based on their adipsin level, even when other glycemic indices such as the hemoglobin A1c are well-controlled. Adipsin is an adipokine that improves β cell function in diabetes. This group may need earlier insulin therapies. On the other hand, there may be a group of patients with high levels of adipsin who may be protected from T2DM. It seems that they are metabolically healthy but are obese (21, 22). Higher Fetuin-A concentrations were associated with gain of visceral adipose tissue, a major component of the metabolic syndrome (23).The level of serum fetuin-A are significantly associated with insulin resistance in women with T2DM. It has been reported that there is a significant correlation between fetuin-A and homeostasis model assessment–insulin resistance (HOMA-IR) index in women but not in men (24).

Fetuin-A and adipsin decreased in T2DM as compared to controls. In addition, higher fetuin-A levels are markedly related to metabolic syndrome (MetS) and an atherogenic lipid profile. However, future studies are necessary to assess whether fetuin-A can predict coronary artery disease risk (25).

Adipose tissue acts not only as energy storage in the body, but also as an endocrine organ that secretes different hormones or adipokines, which circulate in distinct target receptors in many tissues. These adipokines seem to contribute in the pathogenesis of T2DM (19).The different metabolic profile of the adipokines such as fetuin-A and adipsin improve the possible role of the adipose tissue in the energy metabolism and glucose homeostasis in T2DM. Different factors may contribute to fetuin-A regulation in relationship with the pathophysiological consequence in T2DM.

There are several limitations to this study, including the cross-sectional nature of the study, limited sample size, and lack of information on the genetic and hormonal characteristics of the subjects. Therefore, it is difficult to present a fundamental relationship according to this cross-sectional design. Nevertheless, further studies are needed to understand factors affecting these adipokine levels during disease.

We would like to thank the patients for their conscientious collaboration and gratefully acknowledge the colleagues who willingly co-operate in this study.