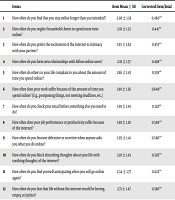 In 2018, the Nigerian Communication Commission affirmed that more than 100 million Nigerians made use of the Internet. A good percentage of internet usage is maladaptive. A valid, reliable, and socio-culturally sensitive assessment instrument is essential to study internet usage patterns in Nigeria. Young’s Internet Addiction test (IAT) has been validated in many countries, but not in Nigeria.

This study aimed to validate IAT to determine psychometric properties acceptable in a Nigerian population.

A total of 184 Nigerian University undergraduates (77 males and 107 females), mean age = 20.5, were purposively drawn, and they responded to IAT, the Smartphone Addiction Scale-Short Version (SAS-SV), and the Bergen Facebook Addiction Scale (BFAS).

IAT is gender-sensitive and has acceptable psychometric properties for the Nigerian population.

Internet addiction (IA) is the inability to control one’s internet use. The estimated total population of people that use the internet has grown to over 4.3 billion, with a global penetration average rate of 55.6% (1). The benefits derived from the internet are enormous, although developing signals linked with numerous adverse effects show that excessive internet use can be problematic (2). Psychological consequences include preoccupation with the internet or internet gaming; disparity in real-life relationships, work, sleep, and education (3); hostility, increased violence, and stress (3, 4); problems with verbal memory and attention (5); maladaptive coping skills (3, 6); and high loneliness and low wellbeing (7). Psychosomatic and neuro-anatomic studies have reported significant relationships between brain alteration and IA (8).

Young’s Internet Addiction test (IAT) has been validated in many countries, including the United States (20), the United Kingdom (UK) (21), Italy (22), China (23) Turkey (24) and Germany (25). Studies on internet use and human behaviors are new and ongoing, with few pieces of literature on the African population (26).

Young (27) developed IAT to measure the presence and severity of self-reported addictive internet use by adolescents and adults. IAT has been used in many countries and also has been translated into several languages (27).

IAT has 20 items that measure online behaviors linked with uncontrollable internet use, including escapism, dependency, and compulsivity. The items are randomized and measured based on a 5-point Likert-scale ranging from 0 = less extreme behavior to 5 = most extreme behavior (27). IAT can be administered to individuals or a group of individuals in about 5 to 10 minutes. Scores of 0 to 30 indicate a normal IA level, scores of 31 to 49 show a mild IA level, scores of 50 to 79 imply a moderate IA level, and scores of 80 to 100 designate a severe IA level (27).

In a content and convergent validity study carried out on Iranian students, Internet Addiction test (IAT) was observed to have a Cronbach’s α of 0.88, a reliability coefficient of r = 0.82, and a cutoff point of 46 (28). In the German version of IAT, reported internal consistencies were α = 0.91 for an online sample and α = 0.89 for an offline group (25). A study of Turkish high school students reported a Cronbach’s α of 0.94 for IAT (24). Widyanto and McMurran (21), in their study on adults in UK, revealed the Cronbach’s α of the six IAT factors as.82 for salience,.77 for excessive use, 0.78 for neglect work, 0.61 for anticipation, 0.76 for lack of control, and 0.54 for neglect social life. Panayides and Walker (29) reported a satisfactory respondent reliability of .86 and a very high item reliability of 0.99 for IAT among Greek high school students. Among Chinese adolescents, IAT was reported to have a Cronbach’s α of 0.93 and a convergent validity of r = 0.37 when correlating with the Revised Chen Internet Addiction scale (30). Many studies reported a satisfactory reliability coefficient and excellent internal consistency for the IAT, ranging between α = 0.88 and α = 0.93 (28, 31, 32).

Descriptive statistics, including mean and standard deviation, were used to determine the new norms for the instrument.

Cronbach’s standardized α, the Spearman-Brown coefficient, and the Guttman Split-Half coefficient were calculated and obtained to determine the internal consistency/reliability of IAT.

The item-total correlations were also obtained to test the relationship between each item and the composite/total item score.

4.1. Calculation of Norms for the Internet Addiction Test

The 95% confidence interval (CI) method was used to determine the cutoff points for IAT. The derived mean based on a sample of 77 male participants was between a range of 38.5 and 45.9. on the other hand, the derived mean for females based on 107 samples was between a range of 40.8 and 46.6 (95% CI 40.8 to 46.6)]. The lower limit of intervals (i.e., mean - 2SD) of ≥ 38.5 and ≥ 40.8 was considered as the cutoff points for the male and female samples, respectively. Any score above the norm implies internet dependency. By implication, scores ≥ 38.5 and ≥ 40.8 on IAT reflect pathological internet usage for Nigerian males and females, respectively (Table 1).

Table 1. The 95% Confidence Interval of Cutoff Point Determination for IAT by Gender

4.2. The Measure of Reliability of the Internet Addiction Test

Cronbach’s alpha (or alpha coefficient), the Spearman-Brown coefficient, and the Guttman Split-Half coefficient were used to determine the reliability of the IAT items and verify their internal consistency in the Nigerian population. As summarized in Table 2, the internal consistency of IAT in the Nigerian sample revealed a Cronbach’s α of 0.79, a Spearman-Brown coefficient of 0.76, and a Guttman Split-Half coefficient of 0.76. The corrected item/total correlations ranged from 0.73 (item 17) to 0.84 (items 7, 8, and 9). The analysis result showed that IAT was reliable for the Nigerian population. All the items in the scale resulted in acceptable goodness-of-fit measures.

Table 2. The Correlation Coefficients of the Scale Items (N = 184)a

Table 3 summarizes the analysis of the factor/total correlation of IAT. The observed Cronbach’s standardized α for the six IAT factors was = 0.69 for salience, = 0.63 for excessive use, = 0.68 for neglect of work, = 0.25 for anticipation, = 0.61 for lack of control, and = 0.44 for neglect of social life. Cronbach’s standardized α was acceptable for all the IAT factors and showed a good unidimensionality and homogeneity between the factors.

Table 3. The Factor/Total Correlation of the Internet Addiction Test (N = 184)a

4.3. The Measure of Validity of the Internet Addiction Test

This study focused on obtaining psychometric properties for IAT in a Nigerian population. The obtained IAT cutoff score was ≥ 48.4 for males and ≥ 45.1 for females. The Nigerian version of IAT showed a Cronbach’s α of 0.79, a Spearman-Brown coefficient correlation of 0.76, a Guttman Split-Half coefficient of 0.76, and a corrected item-total correlation range of r = 0.73 to r = 0.84. The Cronbach’s α obtained for the Nigerian version of IAT was slightly lower than the Cronbach’s α of 0.98 obtained in German offline adolescent samples (25), 0.94 in a study in Turkey (24), 0.93 in a study in China (30), and -0.82 in a study in UK (21). Our finding showed a good inter-relatedness between the IAT items as well as the unidimensionality and homogeneity of the IAT factors (35, 36) in the Nigerian population.

The internet has contributed immensely to making life a lot easier, as information is more assessable from any part of the globe, and even outer space. The internet also offers platforms, through which people can connect from across the world. On the flip side of the coin, the internet has caused lots of people to spend too much time behind their handheld and desktop computers, to the extent that it has become the focal point and center of their lives and resulted in addiction. The diagnostic and statistical manual of mental disorders views IA as a disorder that needs further research (37).

IA is common among children and young people (26, 38). Akinnawo and Akpunne (39) found a 48.6% prevalence of IA among Nigerian university undergraduates, which is a high IA rate in Nigeria. In 2017, the Punch Online Newspaper reported that Nigeria had an internet penetration ratio of 26.5% (40). In 2020, the internet penetration rate was 46.6% among Nigerians, and Nigeria was ranked at the top of the list of African countries based on the percentage of internet traffic consumed by its people (41), fourth in sub-Saharan Africa, and 22nd globally based on the country’s level of internet freedom (41, 42).

The explanation for the high prevalence rate of IA in Nigeria could be drawn from several theories, two of which are discussed in this study. First is the need-to-belong theory developed by Baumeister and Leary (43). According to the theory, one of the most powerful, influential, and universal human drives, which shapes emotion, cognition, and behavior, explains self-esteem, and measures chances of a good relationship is the need to belong (44).

The internet is one way through which the Nigerian culture of the extended family system and kinship groups is maintained in this age of information and communication technology. The extended family system is defined by Encyclopedia Britannica (45) as an expansion of the nuclear family and is usually built around the unilineal descent group. The extended family, typical of the Nigerian social-cultural setting, often occurs in regions where a high level of cooperation is necessary and financial, and material aids/supports are solicited due to the difficulty of the nuclear family to be self-sufficient (45). The need to belong frequently fuels the use of social media platforms to remain connected, thereby fostering social bonds.

Again, the need to belong theory has been hypothesized to not only making the formation of social bonds easy but also predicting the reluctance to break social bonds (43). Hence, the motivation for making frequent social contacts and communication and seeking information influences human behavior.

Furthermore, studies show that internet addicts often feel stressed, overwhelmed, depressed, lonely, or anxious, and frequently resort to using the internet to seek solace or remoteness (46). Accordingly, the high prevalence of psychopathological symptoms in Nigeria (26, 47) represents an urge to escape from stress, loneliness, depression, anxiety, and other mental health issues and seek solace through the internet.

This escapism tendency could be explained by the uses and gratifications theory (UGT) developed by Katz et al. (48). UGT describes why and how people actively seek out things or items to satisfy specific needs. Moreover, UGT explains how users deliberately choose media that meets given needs and also enhances knowledge, relaxation, social interactions/companionship, diversion, or escape (49). The internet provides an avenue for people to explore UGT. According to Stafford et al. (50), there are three categories of gratifications, namely content gratifications, process gratifications, and social gratifications. Content gratifications include internet use to search for specific information. In the process gratifications category, internet users gain gratifications from the experience of purposeful internet surfing. Lastly, the social gratifications category encompasses forming and deepening social ties. Hence, the need to foster social interactions, overcome depressive feelings, reduce stress and anxieties, eliminate loneliness, and lessen the burden of psychopathological symptoms exacerbated by the social-political setting of the Nigerian society is the reason for the increased internet use among Nigerians.

Based on this study’s findings, we conclude that IAT has acceptable psychometric properties for the Nigerian population. Moreover, we derived a new IAT norm for Nigerian males and females and assert that IAT fits well with the Nigerian culture.

This study was undertaken based on the unique psychological, social, and cultural setting of the Nigerian population. Hence, the generalizability of the findings to other populations with different social-cultural characteristics may be compromised.