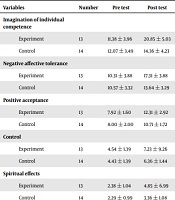 Drug addiction, defined as a chronic brain disease, leads to worse physical and psychological status that has the most damaging effect on the family system.

This study investigated the effect of acceptance and commitment therapy (ACT) on psychological resilience in drug abuser women.

This semi-trial study was done by a pre-test/post-test and the control group. The statistical population of this study was drug abuser women who were hospitalized in addiction treatment camps in Zahedan and were detoxified. The single-stage cluster was sampling method; twenty-seven females were randomly divided into the trial (n = 13) and control groups (n = 14). The Connor‐Davidson resilience scale (CD‐RISC) was used as questionnaire. The data were analyzed by multivariate covariance analysis.

There was a significant change in the interpersonal competence, negative affective tolerance, and spiritual effects in the post-test in the experimental group compared with the control group. According to the Eta coefficients report, the most effective issue was the perception of individual competence with the effect and difference equal to 34% in post-test scores, which was the effect of ACT.

Drug addiction, defined as a chronic brain disease, leads to worse physical and psychological status, drug dependency such as cocaine, heroin, and methamphetamine (1), which are mostly harmful in the family and daily life (2) and damaging of many social, familial, and personal abilities in addicted women that lead to sexual deviations and self-promotion (3). The most common impact of dependency on families is that the family may turn around substance abuse, just as the addict revolves the substance. In many occasions, anxiety, guilt, depression, anger, and helplessness emotions of an addict are major disruptions in a family, and most attentional factor is that the family usually does not know how to assist the addicted person (4). Less attention to women with substance use disorder causes a high rate of prevalence (5). While the number of addicted women raises rapidly, recent statistics indicated that women account for 9% of drug users in the community (6).

One of the most effective factors in an addicted woman is psychological resilience that includes a concept of healthy, integrated positive function or adapting and responding to stress with coping with a psychotic illness that often experiences high levels of distress and difficulties (7-9). Resilience is a key to design strategies that contain professional development and interpersonal skills (10). Also, psychological resilience provides a high capacity for mental and physical health that makes adapt to adverse conditions to recover personal control, optimism, and social duties (11, 12).

In this regard, interventions and the societal goal should focus on resilience, which can provide useful approaches in patients (13, 14). In particular, women with a higher level of resilience show less change of psychopathologies and drug consumption (15) with a better act in disaster situations that make flexibility against the cause of stress situations. Furthermore, acceptance and commitment therapy (ACT) is one of the treatment strategies from the third tendency of behavioral therapy to increase resilience. Other studies showed that ACT was an effective treatment during inpatient follow-up (16, 17). The purpose of ACT is to accept and commit with regard to reducing emotional, cognitive, physical, and behavioral symptoms of the problem for preferable life (18, 19), concerning moderate chronic pain the harmful behaviors of addicts (20, 21). The ACT mechanisms consist of three aspects, including (1) the mediational effects of psychological flexibility and the six components, (2) unique mechanisms of ACT compared to CBT, and (3) the generalizability of these mechanisms to internet-based ACT interventions (22).

Interventional ACT included six core progressions, such as acceptance, cognitive fault, and the relationship with the present, self as a context, value, and committed action for psychological flexibility (23). Researchers show ACT was effective in improving mental health in comparison to amphetamines and common components (24).

This study had a quasi-experimental, pre-post intervention design with the control group. The sample population, according to the G power software that adjusted with Morgan table, was twenty-seven drug abuser women who were randomly assigned to a one-step cluster with a random availability method to an intervention or a control group. The participants were allocated to the trail (n = 13) and control (n = 14) groups. Women who were diagnosed as drug abusers underwent detoxification without any expression comorbidity of psychiatric or neurological disease along with their drug substance use disorder. An individual got eight steps of acceptance in the treatment sessions and commitment intervention for the trail group. The main aim of the sessions was to improve psychological resilience. The inclusion criteria were primary education, undergoing detoxification, attending the sessions of a residential center, having a positive drug abuse test, at least two years of a history of drug dependency, substance use of opium, cocaine, crystal-meth in individuals, and age of 18 years or older. The exclusion criteria were having a history of psychotic disorders, chronic disorders, and pregnant women. The study was done for three months, from April 12 to July 20, 2017. Written informed consent was obtained from the participants before the study.

This questionnaire was developed by Connor and Davidson in 2003, comprising of 25 items, each question rated on a 5-point Likert scale (0 - 4), higher scores indicate greater resilience. The CD-RISC is a brief, self-rated measure of resilience that has sound psychometric features by using the resilience questionnaire. The findings of this study demonstrate the following items: resilience is measurable by health status; thus, resilience is an adjusted approach, which can be improved by the treatment. The CD-RISC could have potential utility in both clinical practice and research (25). The reliability and Kaiser-Meyer-Olkin (KMO) coefficient for the Iranian version of the questionnaire reported 0.93 and 0.91, respectively. Bartlett index in 2174 was significant at 0.001, which indicates the adequacy of sampling questions and correlation matrices (24). In this research, Cronbach’s alpha coefficient reported 0.78.

To respect confidentiality an unknown ID number was allocated to each participant and interviews was done in privacy and the participants were assured that no data would be linked back to them. The data were analyzed by multivariate covariance analysis.

The participants contributed to the study after signing the written informed consent and voluntarily. The information derived from them remained confidential throughout the research. The present study was also approved by the Ethics Committee of Sistan and Baluchestan University in compliance with the declaration of Head’s Anti-Drug Council. The names and information of all participants were kept confidential in this study.

The sample population was comprised of 30 individuals. The mean age ± standard deviation (SD) of addicted women was 29.74 ± 14.95 years, with a 95% confidence interval. Furthermore, drug abuser women in the experiment/control groups aged 21 - 28 years old comprised 85.42% and 84.53% of the study population, respectively (Table 1). The scores of the mean and SD of research variables with their subscales are presented in terms of the study groups, including the experiment and control groups.

Table 1. The Frequency and Percent of Age Group in Drug Abuser Womena

Table 2. Descriptive Indices of Resilience and its Subscalesa

Table 3. The Results of Homogeneity of Regression Gradients Under the Resiliency Scale

Based on the F results from the Levin test, the assumption of zero is verified in the table, and it can be said that the homogeneous assumption of the dependent variables in the groups is established. Given the above assumptions, we are permitted to use the MANCOVA test (Table 4).

As seen in the table, the quadruple tests of multivariate covariate analysis related to the difference in the variables of research were statistically significant, with a 95% confidence interval. Therefore, the results indicated that ACT had an effect on dependent variables. The results also indicated that ACT had an effect on the mean of at least one of the dependent variables in the trial group compared with the control group at the post-test step F (2, 21) = 4.26, P = 0.008, Wilks’ Lambda = 0.49, and partial eta squared = 0.5 (Table 5).

The results after eliminating the pre-test effect on the dependent variables and considering the coefficient F obtained in the imagination of individual competence (F (1, 28) = 13.21, P = 0.001, partial η2 = 0.34), negative affective tolerance (F (1, 27) = 7.87, P = 0.01, partial η2 = 0.23), and spiritual effects (F (1, 28) = 10.70, P = 0.001, partial η2 = 0.30); there was a significant difference between the adjusted mean scores of the participants in two times of pre-test and post-test. Therefore, the effect of ACT on the improvement of psychological resilience was demonstrated. In particular, it could be concluded that in the trail group, there was a significant change in the interpersonal competence, negative affective tolerance, and spiritual effects in the post-test compared to the control group affected by ACT intervention. Based on the Eta coefficients, the most effective issue was the subscale of the imagination of individual competence, with the effect and difference equal to 34%. This means a 34% difference in post-test scores was the imagination of individual competence that was the effectiveness of ACT (Table 6).

This study shows improvement in resilience in women with drug abuse who received ACT, that is consistent with other researches. Gender is considered as one of the main factors in effectiveness of ACT, as women achieved more improvement.

Moreover, researchers declared that gender was an important factor in psychological resilience (26). Besides, ACT is a recent form of cognitive-behavioral therapy, which can solve a wide range of health problems, especially dependency (27). Also, other investigations show that ACT is effective in increasing resilience; consequently, therapists are advised to use ACT for increasing resilience and coping with the ability (28). Furthermore, the study on the alcoholic population indicates that the understanding of resilience was a process that can enhance psychological health (29). So, higher levels of resilience treatment can predict balanced emotions over time and recover daily stress (30). Other researchers declared resilience led to declining codependency in drug abuser mothers (31). The target of acceptance and commitment treatment is to learn to emphasize their present emotions; this helps the clients experience changes in their minds and thinking (32). In general, ACT is an effective treatment for women with substance use disorder (33). In this study, we indicated that the approach of ACT, as a coping mechanism, might develop awareness, living at present, and keeping psychological health. Furthermore, improving psychological resilience in the treatment of ACT was considered a coping mechanism in addicted women to adapt to their conditions.

The present study was that it had only one intervention group, so the effect of ACT was not compared with other interventions. On the other hand, this is the first study in Iran that investigates the effect of ACT on psychological resilience in women with substance use disorder. We are hopeful that our results will get more attention to the importance of ACT aspects to raise psychological resilience for drug abuser women. Therefore, further studies with larger sample sizes are recommended. Our findings should be generalized with caution; thus, other side effects of ACT studies are suggested. In addition, future studies should investigate the effects of ACT in both genders and another disease.

We appreciate the participants for taking part in our therapy to do this research and other staff who collaborated with us.