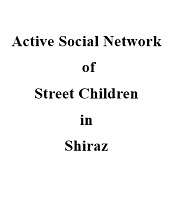 Street children are a hard-to-reach population. Since the direct method is not feasible and has some limitations, we utilized the network scale-up (NSU) as an indirect method. This study was conducted in Shiraz municipalities. Our target population was Iranian boys between 10 to 18 years of age during the years 2014 to 2016. Three trained psychologists conducted face to face interviews with 86 street children (boys) on the streets, through the convenience sampling technique. The social network size of street boys in Shiraz was estimated at 17 persons (ranging from zero to 92 people, mean = 17 ± 17, median = 13). Overall, the network size of the hidden population might be smaller than the general population, due to the stigmatized nature of their behavior and place of work.

Size estimation of a hard-to-reach population is one of the main issues in the social science and public health domain (1). Since the direct method is not feasible and has some limitations, an indirect method was developed to overcome these issues. One indirect method is network scale-up (NSU), and a social network size estimation is the first step in this method (2, 3). The NSU method shows how people in a network of subgroups have a direct link with the real size of that subgroup in a general population (4). Street children are a subgroup of the hard-to-reach population. They are highly prone to high-risk behaviors and their consequences (5). Several studies were conducted on Iranian general population to estimate active social network size (2, 3). One study was conducted to estimate the population size of two HIV/AIDS key populations; injecting drug users and female sex workers in Iran (1). So far, no study has estimated the population size of street children in Iran; hence, we decided to estimate the size of street children’s social networks in Shiraz.

This cross-sectional study was conducted in 6 different districts of Shiraz municipalities, located in southwestern Iran. Our target population was Iranian boys between 10 - 18 years of age who worked in the street 2014 - 2016. Three trained psychologists conducted face to face interviews with 86 street children (boys) on the streets, through the convenience sampling technique. The researchers asked the target group how many people were recognized in a specific subpopulation inside the community to approximate social network size in the indirect method. In case the participants knew somebody in the mentioned subpopulation by name and face and could visit, call or email the cited person whenever he/she wanted, and vice versa, we found that they knew each other. They had contact by phone, email, or in person at least once within the past two years (2, 4).

We obtained their total population by referring to the Registrar-General of Fars province. Approximately, 86,426 boys’ names were obtained, and their birth certificate was from the city of Shiraz. Names were selected based on the guidelines provided in the literature: proportion in the general population being from 0.1% to 4%, popularity not being changed in recent decades, and gender-neutral/ambiguous names (3). The information collection form was about the number of individuals called (Ali and Ali Reza, Reza, Mehdi, Amir Hossein). In this method, we asked how many boys he knew by name (4). The basic equation in the NSU method is e/t = m/C. In this equation, e is the size of a specific reference group, and t is the size of the total population, which both of them obtained from other sources. M is the number of individuals that each respondent knows from a specific reference group, and C is the respondent’s network size” (3, 6). First, we need to estimate C as the network size for this population. C is different in each community and depends on its social and cultural structure (4). If multiple names were used, like our study, the social network size was estimated through the following equation:

The m is the average number of individuals belonging to a sub-population that is known by our samples. The standard error of estimator was obtained from the following formula:

We used to mean as maximum likelihood estimation for estimating the final size of population (2, 7).

Our study approach was through the frequency of these names. A total of 86 street boys were interviewed in Shiraz with a mean ± standard deviation (SD) age of 15.42 ± 2.15 years. The number of children in a family ranged from three to twelve, with a mean ± SD of 5.14 ± 1.5 children. Working hours in a day were from two to sixteen, with a mean ± SD of 7.34 ± 2.19 hours. A total of 39.8% were studying at the elementary level. The length of their stay in the street was one to 132 weeks. The name frequency of Ali and Ali Reza ranged from zero to ten times. Also, the name frequency of the Reza was zero to four, Mehdi zero to five, and Amir Hossein zero to three times. According to the mentioned formula and using the MLE method, the social network size of street boys in Shiraz was estimated at 17 persons (ranging from zero to 92 people, mean = 17 ± 17, and median = 13).

The methods such as census/enumeration, nomination, population surveys, mathematical, multiplier, capture-recapture, respondent-driven sampling (RDS), and network scale-up are considered as direct and indirect methods for size estimation. In direct PSE, we need direct contact with members of the hidden group, but in indirect PSE no direct contact with members of the hard-to-reach group is required (8). Iran’s national HIV strategy plan for 2015 - 2020 takes into account street children as one of the key populations in contracting and transmitting HIV (9). Also, studies reported weak social ties, networks, and lack of supports among street children, because of unsteady working place or fear of society (10, 11). In the current study, we used an indirect method called network scale-up. Having the network size as the basic information can be used in future studies. Therefore, we estimated the social network size in children to be used in future studies.

A study was conducted to estimate the social network of two key groups of HIV/AIDS in Shiraz and Kerman. The results showed injecting drug users, and female sex workers knew an average number of 15.92, and 17.31 persons (1). The network size of the hidden population might be smaller than the general population, due to the stigmatized nature of their behavior and place of work (1). Social network size estimation is the first step in the network scale-up method to calculate the hard-to-reach population for the allocation of financial and human resources as well as treatment and prevention program implementation.