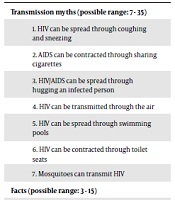 AIDS Attitude in First-Year Students with History of Sexual Behaviors: A Cross-Sectional Study

The aim of this study was to investigate the attitudes of the students of Medical Sciences and Technical Sciences Universities toward HIV/AIDS. This cross-sectional study was performed on 950 first-year Medical Sciences students and first-year Technical Sciences students between May 2017 and June 2018 in Tehran, Iran. The students were selected using the census-sampling method to fill out the International AIDS Questionnaire-Persian version (IAQ-P). SPSS version 21 was used to analyze data by the chi-square test and nonparametric tests. There was a significant difference in the mean score of AIDS attitude between the two groups (P < 0.001). Confounding factors including age, gender, and marital status had a significant effect on students’ AIDS attitude between the different groups using regression models (P < 0.001). There is an increasing trend in sexual activity among students and young people while it is not true about its attitude and awareness. Therefore, we need to improve attitude toward AIDS in developing countries.

Since its inception in 1981, the Acquired Immune Deficiency Syndrome (AIDS) has been undoubtedly one of the most important challenges for developed and developing countries (1-4). Based on the World Health Organization (WHO) estimates, there were about 37 million people in 2016 in the world suffering from AIDS and Human Immunodeficiency Virus (HIV) (2-4). Moreover, according to the latest WHO report in 2016, 1.8 million people across the world were infected with HIV and more than one million patients died of AIDS-related disease (4-8).

In recent years, concerns about sexual health have increased throughout the world (9). In most countries, the increasing prevalence of Sexually Transmitted Diseases (STDs), especially HIV infection, in young people is alarming (10, 11). According to the report of the Ministry of Health and Medical Education in Iran, 36,571 people were living with HIV in 2018, while this number was 5,086 in 2003 (5). Studies have shown that new HIV-infected people in Iran were drug users, but there is a rapidly rising trend in the number of people infected sexually (8). Reports published by the WHO over the past 10 years show that the pattern of HIV transmission through sexual relationships has changed (4). Teens and young people are more at risk of AIDS than adults (3). The WHO estimates that 50% of individuals newly diagnosed with HIV are young, between the ages of 15 and 24; additionally, 53% of new patients infected with HIV in Iran are in the age group of 21 to 35-years-old (8-11). Young people and university students are a major group involved in sexual activity and the first sexual experience like intercourse can occur during the university period (12-16). In Iran, there is no sexual relationship/STD education provided by the national media and the Ministry of Education that causes unreliable education to young people.

The aim of this study was to investigate the AIDS attitude in first-year students with prior sexual behavior experience.

This cross-sectional study was performed on first-year Medical Sciences students (Islamic Azad University, Tehran Medical Sciences Branch) and first-year Technical Sciences students (Islamic Azad University, Shahr-e-Rey Branch) between May 2017 and June 2018. The sample was recruited by the census-sampling method and 2,643 first-year students in the first or second semesters were included to complete the questionnaires (n ≥ 1,300 students from each university). The inclusion criteria included first-year students from the selected universities, an age of at least 18 years, and a prior sexual behavior experience. The exclusion criteria included incomplete questionnaires and a history of participating in AIDS educational courses.

In this study, we used the International AIDS Questionnaire-Persian Version (IAQ-P) for data collection (14). The IAQ was developed by Davis et al. (1999) (17). This questionnaire includes 18 questions for assessing the four dimensions of HIV/AIDS attitude, including myths, facts, personal risk, and attitudes. Every question was scored on a five-point Likert scale. Finally, higher scores indicated positive and accurate attitudes toward AIDS. Alipour et al. (2016) confirmed the validity and reliability of the Persian version of this questionnaire (13). The data were analyzed using SPSS version 21 using the chi-square test and nonparametric tests. P values of less than 0.05 were considered significant.

aItems were scored on a five-point Likert scale ranging from 1 (strongly agree) to 5 (strongly disagree).

bAgreement percentage calculated by points 1 and 2 of the Likert scale.

The results showed that after adjustment for the confounding effects of age, gender, and marital status (Table 3), the university had a significant effect on students’ attitude toward HIV/AIDS (β = -0.154, P value < 0.001). The study by Davis et al. (2007) in Chinese adolescents showed similar results although the average scores in our study were lower in all four dimensions (17). The AIDS attitude was more in female students than in male students but there was no significant relationship between gender and AIDS attitude. However, male students had more sexual behaviors. Some studies have shown that new HIV-infected patients in the world are mostly young females (18). In the study by Mulu et al. (2014), the attitude of men was more than that of women (19). In addition, Alipour et al. (2016) showed females had more AIDS attitude than males (P < 0.0001); however, in our study, there was no significant difference between males and females.

The level of students’ attitude toward AIDS/HIV was not desirable that may be due to the limited educational resources for HIV and sexual activity targeting Iranian students (8-11). In some developing countries including Iran, society and culture create stigma around discussing sexual activity and related issues and there are misconceptions and myths about sexual activity, sexual health, and STDs (8-11, 14).

The limitations of our study were the small sample size, the stigma around the subject, unwillingness of some students to participate in the study and report on their prior sexual behaviors like intercourse. This finding showed that Iranian students’ attitude was poor toward AIDS and HIV, especially in Medical Sciences students. There is an increasing trend in sexual activity among students and young people while it is not true about its attitude and awareness. Therefore, we need to increase attitude toward AIDS in developing countries.

Copyright © 2019, Author(s). This is an open-access article distributed under the terms of the Creative Commons Attribution-NonCommercial 4.0 International License (http://creativecommons.org/licenses/by-nc/4.0/) which permits copy and redistribute the material just in noncommercial usages, provided the original work is properly cited.
download pdf 128.13 KB Get Permission (article level) Import into EndNote Import into BibTex
Number of Comments: 0