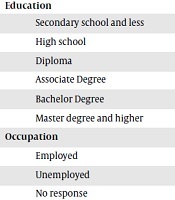 Human papillomavirus (HPV) is one of the most common sexually transmitted infections, with the highest prevalence among young adults. We investigated the risk factors of this infection among men. A total of 224 men referred to a dermatology clinic in Shiraz to treat anogenital warts from June 2015 till Feb 2016 were enrolled. Data collection form included demographic characteristics and risk factors. The participants’ mean age was 28.84 ± 8 years, and half of them (54.5%) were in the second decade of their life. Nearly half of them were single, 110 (49.1%), and 103 had high education (48.4%). Among our participants, the mean age of sexual relationship onset was 20.31 ± 3.71; 69 (60.5%) of the married participants had experienced sexual intercourse before marriage, and 58 (61.05%) had extramarital sexual relationships. The mean number of sex partners was 2.8. More than half of the participants (n = 146, 66.4%) were not aware of STI symptoms. Our participants were young, and more than half of the married ones had extramarital relationships. Altogether, low awareness of STI symptoms was seen. HPV could be a public health challenge in our young male adults because of their risk factors and lack of knowledge.

We investigated risk factors and knowledge about STIs among men with AGW.

The men who referred to a dermatology clinic affiliated to Shiraz University of Medical Sciences to treat AGW from June 2015 to Feb 2016 in Shiraz were enrolled. The data collection form was consists of age, marital and educational status, age of the first sexual intercourse, alcohol consumption, cigarette smoking, and pattern of sexual behavior and STIs knowledge.

Informed consent was taken from each patient after explaining the objectives of the study, and their information was recorded anonymously. Our study was approved by the local Ethics Committee of Shiraz University of Medical Sciences (Ethics code: ec-p-9378-7568).

cEverybody may have more than one type of sex partner

Anogenital warts are one of the most common infections among adolescents and young adults (11). This study represents general information and risk factors in men with genital warts in Shiraz, Iran. Those infected were largely young; almost half of them were single and had a high level of education. Similarly, young adults have been reported as the highest vulnerable group (11, 12).

There were no differences in awareness about STI between married and single participants. Also, no association was observed among condom use, sex type, and STI knowledge in our study. On the other hand, another study showed that HPV awareness was higher among highly educated and married participants (11).

Result of different studies showed that most of the participants had high education and unsafe sex, but did not use a condom (1, 6, 13, 14). These results are consistent with our findings.

Our study could provide baseline data for an interventional study. The presence of information bias is probable due to self-report. Lack of a control group was our limitation.

HPV is a public health challenge that involves young adults. To combat this problem, primary prevention by abstaining from multiple sex partners and condom usage are the best option. Managing the affected patients should be considered secondary prevention by finding and treating symptomatic and asymptomatic individuals in STI clinics. Most of the infected population are young people; hence, the psychological and economic burden of HPV infection should be considered.