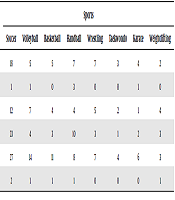 Investigating the Prevalence of High-Risk Behaviors among Professional Athletes

Unhealthy and high-risk behaviors are important public health problems with both long- and short-term effects (1). Ford describes risky behavior as any behavior that increases negative health-related outcomes for the doer (2). Since the end of the 1980s, risky behaviors in the youth have become a major issue for public health (3). More attention has been recently paid to the role of sports in preventing (4) and controlling HRBs. Some studies showed sports programs were associated with decreases in some HRBs (4-6). Conversely, other studies showed that they were associated with increases in some HRBs (3, 4, 7, 8). These contradictions, along with the issue that these studies were often limited to educational contexts (e.g., high schools, colleges), and therefore failed to include sports participation in other settings (4), makes it necessary to do more research. In addition, it is not known that the frequency of HRBs in professional levels increases or decreases.

The study aimed to examine the prevalence of HRBs in Iranian professional athletes.

We conducted a cross-sectional survey study on 1,940 Iranian male professional athletes in eight sports. The professional athletes aged 17 to 29 years (M = 25.7) of Olympic medalists, World Championships medalists, members of national teams, and national champions, and athletes involved in the Premier League in sports such as Soccer, Basketball, Volleyball, Handball, Karate, Wrestling, Weightlifting, and Taekwondo were selected by stratified random sampling as the study sample. The sample was selected according to the number of athletes in each sport. The study instrument captured the data of professional athletes based on responses to questions on six so-called high-risk behaviors, including Doping: the frequency of illicit performance-enhancing drugs use at least once during the last 12 months; Cigarette use: the average number of cigarettes smoked per day; Shisha (smoking water pipes) use: the average frequency of shisha use per day; Alcohol use: drinking alcohol at least one time per month. Violence involvement: the frequency of fighting with spectators, coaches, referees, opponents, teammates, and other people per season; and Illicit drug use: the frequency of cocaine, heroin, cannabis, and new psychoactive substances used in the last 12 months. The face and content validity of the survey instrument were investigated with the exact following of study literature and comments of experts (10 people), and its reliability was calculated by the Cranach’s alpha coefficient (α = 0.81). Then, 2,200 questionnaires were distributed to the research sample, 1985 of which were returned to the researcher (90.23%). By removing incomplete questionnaires, 1,940 questionnaires were identified to be appropriate for analysis. To analyze the data, descriptive statistical methods (tables, percentages, and total percentages) were used.

The results showed that the prevalence rate of violence involvement was 4.1%, doping 3%, alcohol use 2.5%, shisha use 2%, cigarette use 0.3%, and illicit drug use 0.3% among professional athletes (Table 1). The prevalence of HRBs in different sports is shown in Table 2.

Overall, the research findings suggested that the prevalence rate of HRBs in Iranian professional athletes was relatively low. According to the literature, structured time schedules, supervision, and frequent exposure to normative behaviors associated with health benefits, development of group identities and cultures, and providing supervision and monitoring (18) due to participation in sports can lead to less engagement in HRBs. According to Leonard (1995), participation in various facets of physical activity is typically thought of as a deterrent to various manifestations of delinquent behavior (19). Moreover, sports participation at the professional-level may generate greater public expectations of athletes as role models that they do not engage in a given HRB. When professional athletics as sports participants become aware that their behaviors come to the attention of the social audience, it reduces the risk of further deviance due to the consequences of stigmatization (7). On the other hand, risk-taking behavior is associated with an individual’s personality characteristics (20) and such personality characteristics may prevent engaging in HRBs. Therefore, public health decision-makers and sports decision-makers should make careful decisions and take necessary efforts to increase participation in sports as a good solution for decreasing the prevalence of high-risk behaviors. Moreover, the education of behavior's values and standards needs to be considered. However, using sports as a preventing factor for high-risk behaviors needs to have a proper foundation.

This study had several limitations that should be noted. First, the results are based on participants’ self-reports of HRBs. In this study, it was assumed that all participants answered the research questions honestly; however, obtaining reliable information on some HRBs is difficult, and athletes are not willing to discuss these topics for some reason. This may cause the true rate of HRBs in the research sample not to be fully recognized. To guard against such problems, we emphasized the confidentiality of the data and notified the participants not to put their names on their surveys. Second, the findings of this research were obtained from Iranian professional athletes in some special sports. Therefore, caution should be taken when generalizing the findings to other professional athletes in other countries and other sports that were not assessed in our study. Third, in the study, the research sample consisted only of male athletes, and female athletes were not included.

The authors thank the study participants for their cooperation and the Basij Bases for distributing and gathering the questionnaires.