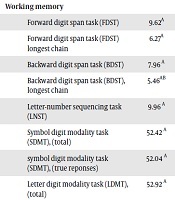 Cognitive functions are higher-order cortical activities that include various parameters such as concentration, executive function, and working memory.

This descriptive-analytical study included patients with ADHD, IAD, and normal individuals (26 normal individuals and 27 patients in each of the IAD and ADHD groups) who were evaluated by Conners’ Adult Scale, General Health Questionnaire (GHQ), Young Internet Addiction Test, and Persian Paper and Pencil Cognitive Assessment Package (PCAP). Data were analyzed by SPSS 23 software. The ANOVA test with Bonferroni’s pairwise comparison and chi-square test were used for data analysis at a significance level of 0.05.

The results showed that the ADHD subjects scored higher (P < 0.01) on the GHQ test and its subscales, as well as the Conners’ test. Also, patients with ADHD had lower scores on attention, concentration, and working memory scales than IAD and normal counterparts (P < 0.01). Working memory was weaker in IAD patients than normal subjects and ADHD and cognitive function is more damaged than IAD.

The results showed that patients with ADHD had higher levels of impairment in working memory than IAD patients. Meanwhile, cognitive deficits were more sensible in ADHD.

Cognitive functions are higher-order functions in the brain that include various parameters such as concentration, executive function, and working memory (1). The neurocognitive function may be impaired in addiction (2). People with internet addiction disorder may suffer from other behavioral addictions such as gambling, sexual behavior, and compulsive shopping (3).

Internet Addiction Disorder (IAD) is defined as a person’s inability to control internet use, with parallel psycho-social dysfunctions, as well as problems in the workplace, school, and daily life (4). Internet addiction disorder has quickly become a common mental health issue in many countries and has, therefore, attracted a lot of attention (5). It is most prevalent in the late second and early third decades of life (6). The prevalence of IAD is from 2.4% (7) to 36.5% (8) among Asian adolescents and youths and 4.6% (9) up to 13.4% (10) in the same age groups in Europe. The standardized prevalence among Iranian populations varies between 3.6% (11) and 45.8% (12).

Attention Deficit Hyperactivity Disorder (ADHD) is a neuro-developmental disorder with a pattern of impaired attention and increased impulsivity and hyperactivity seen from childhood to adulthood (13). In a study, the prevalence of ADHD was reported to be 3.8% (5.5% for men and 2% for women) in Iran (14). Hyperactivity is known to decrease with age, but irritability and emotional dysregulation may be the most prevalent manifestations in older patients. These symptoms can co-occur with behavioral addiction; for this reason, IAD is one of the most common comorbidities among patients with ADHD who show a higher intensity of internet addiction (15). Moreover, IAD is found in both hyperactive-impulsive and inattentive types, although the former one is at a higher risk of addiction (16).

Zhou et al. concluded that IAD patients have differences in working memory and executive function, and impulsivity is higher in IAD patients (17). Park et al. observed that the earlier onset of IAD and its longer duration were associated with the lower performance of participants in attention tests (5).

Several studies have pointed to a considerable cognitive deficit among people with Internet Use Disorder and ADHD compared to healthy individuals (18-20). There are yet insufficient data concerning differences between internet addiction and ADHD. In this spirit, the study aimed to determine the possible deficits in afflicted patients in an Iranian population.

This was a descriptive-analytical study with 30 people in each group. People with ADHD were conveniently selected from among 18 to 50-year-old patients who attended the psychiatric clinics of Tabriz University of Medical Sciences in Iran during 2017 - 2018 and met the inclusion criteria of the study. The IAD participants were conveniently recruited from among people attending internet and game cafes, or those who simply volunteered as patients for research upon an announcement; their age, sex, and education were matched to the ADHD group. The healthy participants were selected from among patients’ companions, hospital colleagues, or based on an announcement whose age, sex, and education were matched to the members of ADHD and IAD groups.

This tool is a guide to make psychiatric diagnoses based on the diagnostic and statistical Manual of Mental Disorders (DSM-IV). Sharifi et al. (21) confirmed its validity and reliability. Clinical interviews were done by an attending psychiatrist and SCID-IV-TR was performed for each participant by a single psychiatry resident.

It is a tool for screening adults with ADHD that uses four subscales. An Iranian study supported the high validity and reliability of the scale (22).

This questionnaire was developed by Goldberg and Hilder (1979, 23). It comprises the scales of physical symptoms, anxiety symptoms, sleep and social functioning disturbances, and depressive symptoms. Its validity and reliability have been confirmed by previous studies (23, 24).

The test was designed by Kimberly Young based on the DSM-IV-TR criteria (4, 27). Its Persian validation was confirmed by Mohammadsalehi et al. (28).

They included a diagnosis of ADHD and IAD according to the DSM-IV-TR criteria done by a psychiatrist and the age of 18 to 50 years.

They included brain or neurological disorders, comorbidity with major psychiatric illnesses, history of epilepsy, serious medical diseases, intellectual disability, taking drugs during the last 72 hours, and unwillingness to continue participating in the study.

The chi-square test and one-way Analysis of Variance (ANOVA) test were used to compare the variables between the three groups. A Bonferroni test was used for pairwise comparisons. The statistical analyses were performed at a significance level of 0.05 using SPSS 23 software.

The study protocol was approved by a regional ethics committee affiliated to Tabriz University of Medical Sciences under No. 94/3-9/15. Written informed consent was obtained from all participants.

There were 26 normal individuals and 27 patients in each of the IAD and ADHD groups. The dropout rates were 10% for each of the ADHD and IAD groups and 13% for the healthy group.

Significant differences were observed between the IAD and ADHD groups in all three fields of executive function (VFT), working memory (BDST), and attention (TMT B and Stroop test second time error, ST third time error, and ST interference time), with the sensible disorder being related to the ADHD group (Table 3).

aResults that were not significantly different were coded with the same letters (A, B, C).

In the analysis by Bonferroni test, the differences between the normal and IAD groups in the cognitive domains were not significant, except for LNST, which was related to working memory. In Park et al. (5) study, no difference was observed between IAD and normal participants in terms of working memory using the digit span task. In our study, working memory impairments were manifested in LNST. The DST consists of two forward and backward sub-tests, with no procedure performed on numbers in the first sub-test; however, the backward type provides a more accurate evaluation of cognitive status in question. In the Wechsler test, both LNST and BDST tests are used to evaluate working memory.

Wisdom et al. (29) concluded that LNST could show the least extent of cognitive changes, while the BDST showed small changes in the cognitive field. Similarly, in the study by Shelton et al. (30), it was observed that laboratory working memory tests such as the n-back test with LNST provided the best evaluation. The results of our study also pointed to the difference between LNST and BDST in working memory performance. Thus, it can be stated that LNST is more capable of revealing working memory problems than DST. This finding may be related to the difficulty of the test, which indicates the presence of mild impairment in working memory in earlier stages. The lack of people’s familiarity with the sequence of the Persian alphabet can be mentioned as a reason justifying this finding. It is suggested that a study with a larger sample size be performed to differentiate the performance of LNST in executive function evaluation from BDST.

In contrast to our study, a significant difference in DST results was observed between IAD and normal people (Cohen’s d for BDST = 0.6; Cohen’s d for FDST = 0.87). This may be due to the smaller sample size in that study (33). Moreover, in the current work, three instruments were used for the evaluation of executive function (SDMT, LDMT, and VFT), rendering the results more reliable.

Adult people with ADHD have difficulties in many cognitive tests, especially in tasks related to inhibition and working memory (39). Meanwhile, a meta-analysis conducted by Schoechlin et al. (40) showed that unlike what is seen in children with ADHD, the executive function does not generally decrease in afflicted adults. It may be justified that adult patients had better outcomes than children with ADHD based on frontal lobe development with age.

The ADHD group was found to show a significant difference from the IAD group in all three spans of working memory, executive function, and attention, which was predictable due to the similarity between the IAD and normal groups.

Overall, the current results showed that ADHD patients had less performance in attention, executive function, and weaker working memory than IAD and normal people, and working memory was weaker in IAD patients than in normal subjects. Among them, ADHD patients have more significant impairments. In ADHD, cognitive function is more damaged than IAD. This highlights the need for paying more attention to rehabilitation and cognitive interventions in these individuals to prevent such problems as social, academic, and occupational dysfunction.

Most patients with IAD also suffer from ADHD at the same time. Given the purpose of the study, a lot of strictness was applied to the inclusion and exclusion criteria. Therefore, the dropout rate increased and the number of samples analyzed was less than expected.