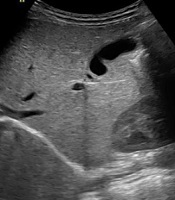 Prevalence of Sonographic Signs in Children with Acute Hepatitis in Zahedan City, Southeast of Iran

Acute viral hepatitis is a common infection in developing countries among children. Different diagnostic methods for acute hepatitis has been introduced.

In this study, we have determined the prevalence of sonographic signs in children with acute hepatitis.

A total of 383 children with acute hepatitis were studied in Zahedan city, southeast of Iran. The sampling method was by the enumeration of the cases. Patients underwent ultrasonography in which their sonographic signs of acute hepatitis were investigated and analyzed.

The results indicate that the most common sonographic signs of patients with acute hepatitis were increased liver echogenicity and periportal hyperechogenicity.

Hepatitis is defined as the inflammation of the liver. Many factors (such as drugs) can cause hepatitis, but globally, the most common cause of this inflammation is “viruses”. If hepatitis lasts for less than 6 months, it is referred to as “acute hepatitis”, and if it lasts longer, it is called “chronic hepatitis” (1). Acute viral hepatitis usually begins with discomfort, fatigue, nausea, vomiting, muscle aches, headaches, and mild fevers. Sometimes, the disease initially presents itself with signs similar to that of the cold. Smokers with acute hepatitis often begin to hate smoking. After that, an “Icter” or “Jaundice” appears.

Usually, as jaundice begins, the general condition of the patient improves, and even their fever might wane; these do not indicate an improvement of the symptoms of the disease, but the opposite. In fact, this is just the beginning. Measuring liver enzymes is a method which physicians use to diagnose patients with hepatitis, Jaundice, or any other disease with similar hallmarks. In hepatitis, the liver cells are destroyed, which causes a large number of liver enzymes, including Alanine Transaminase (ALT) and Aspartate Transaminase (AST) to enter the blood. The elevation of these enzymes in the patients’ serum represents hepatitis (2).

To determine the prevalence of sonographic signs in patients with viral and acute hepatitis, ultrasound and computerized tomography scan (CT scan) studies have been investigated by some researchers (2, 13-15). Also, some other researchers have studied the efficacy of conventional ultrasound and Doppler in the diagnosis of acute hepatitis (16). The results of these studies have indicated that there is no general agreement on the prevalence and importance of sonographic signs in acute hepatitis.

In this paper, we now address this unique aspect for evaluation of sonographic symptoms in children with acute hepatitis all at once and we have presented the results showing that the most common sonographic signs of patients with hepatitis were increased liver echogenicity and periportal hyperechogenicity.

At first, patients who were between 6 months and 15 years of age referred to the pediatric clinic and were visited by a pediatrician. Those who were suspected of acute hepatitis were sent to the laboratory for testing. After evaluation of ALT, AST, bilirubin, and anti-hepatitis Immunoglobulin G (IgG) antibodies, a group of patients diagnosed for hepatitis were sent for sonography. Each patient underwent ultrasound with a General Electric (GE) ultrasonographic instrument equipped with a curved probe at a frequency of 3.5 to 5 MHz, and the observed symptoms in his/her ultrasound were determined and recorded. At the end of the research, the prevalence of ultrasonographic signs was calculated in the case study group.

Sample size and sampling method are obtained from the following equation:

After collecting the data, all data were analyzed using the Statistical Package for the Social Sciences (SPSS) version 20.0 (Chicago, II, USA). To describe the quantitative data, the central and dispersion indexes (mean and standard deviation), and for the qualitative data description, the distribution tables (absolute prevalence and relative prevalence) were used.

In this research, all ethical considerations have been reviewed and approved by the Ethics Committee of the Zahedan University of Medical Sciences (IR.ZAUMS.REC.1393.6714). 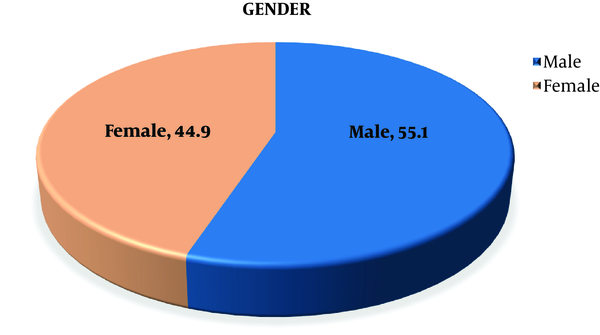 Demographic distribution of patients by gender. 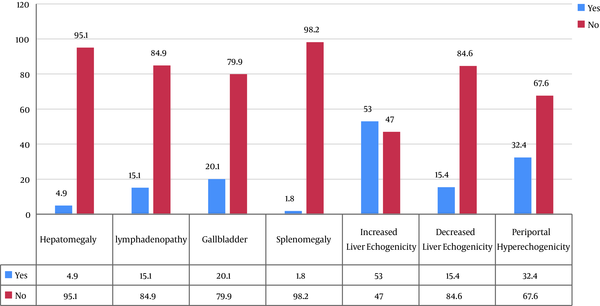 Prevalence of sonographic signs (percentage) in children with acute hepatitis. 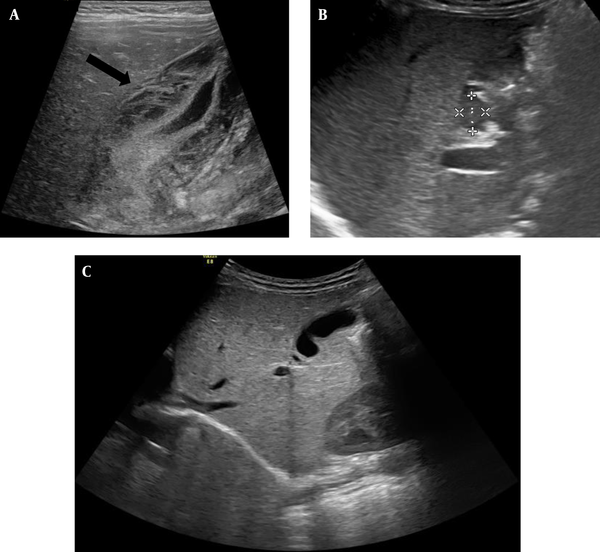 In a study conducted by Braden et al. (15), it was concluded that periportal lymphadenopathy is common in infectious diseases and acute autoimmune diseases, and the absence of periportal lymph nodes in acute liver injury has led to a search for toxic and metabolic causes.

Garassini et al. (14) also studied the ultrasonographic signs of acute hepatitis and reported the signs of lymphadenopathy, splenomegaly, and gallbladder wall thickening. Although in our study, these symptoms were also observed in acute hepatitis, these symptoms were different due to the low percentage of splenomegaly (1.8%), increase thickness of the gallbladder wall (20.1%) and lymphadenopathy (15.1%) in comparison with liver hyperechogenicity (53.0%) and periportal echogenicity (32.4%). Various studies have been carried out on this topic, i. e. in the Toppet et al. study on 58 children with acute hepatitis (13), the lymphadenopathy for all patients was much more common than what we observed in our study. These lymph nodes were mainly located at periportal vein and in the front of the pancreas head. The other sonographic signs were observed with the following frequencies: an increase in the liver echogenicity was observed in 53% of the patients, which is consistent with our study. Moreover, an increased thickness of the gallbladder wall between 3 and 6 mm was observed in 52% of patients, much higher than our study, which was about 20%. Hepatomegaly was observed in 43% of patients that was much more than our study with only 5% hepatomegaly. Also, periportal hyperechogenicity was seen in 24% of the patients that it is lower than our study with 32% (13).

In another study by Shin et al. (16), the efficacy of conventional ultrasound and Doppler in the diagnosis of acute hepatitis was studied, and it has been shown that ultrasound is consistent with the laboratory criteria for acute hepatitis and can help to diagnose it.

In a different study by Yoo et al. (23), CT scan findings in acute hepatitis were evaluated, and variations in the symptoms observed in patients have been reported as follows: gallbladder changes in 75%, priportal edema in 43%, hepatomegaly in 23%, and splenomegaly in 52% of patients. These findings are more frequent than the ultrasound findings, which is due to the quality of the instruments used.

Thus, the ultrasonography findings have a significant role in the early diagnosis of acute viral hepatitis and can help us to detect the changes in the hepatobiliary system on ultrasound in most of the acute viral hepatitis. Some very common findings related to the gallbladder include an increase in thickness of gallbladder wall and pericholecystic edema. Detection of these changes can be used as further evidence of acute viral hepatitis. This is most useful if serological diagnostic facilities are not available as they reinforce the diagnosis of suspected acute hepatitis. The detection of the mentioned changes within the gallbladder has been further verified by a more accurate testing technique called endoscopic ultrasonography (2, 24).

The limitation of our study is that we were not able to determine any specific time for the sonographic symptoms. For instance, during different sonographic exams, patients were only diagnosed under acute, subacute, and chronic conditions with no other apparent distinctions.

As a general conclusion, our ultrasonography findings are present in most of the acute viral hepatitis. Our results show that the sonographic signs that are seen in children are nearly similar to most other studies, but the incidence rate and prevalence of each sign are different. It may be due to the type of sonographic instrument, the proficiency of the sonographer, and even the location of the study (for example, nutritional habits or patients’ level of health). Therefore, because of the dependence of ultrasound findings on the type of instrument used and the sonographer, these differences are reasonable. Overall, our results have shown that the most common sonographic signs among patients are liver hyperechogenicity and periportal hyperechogenicity.

Copyright © 2020, International Journal of Infection. This is an open-access article distributed under the terms of the Creative Commons Attribution-NonCommercial 4.0 International License (http://creativecommons.org/licenses/by-nc/4.0/) which permits copy and redistribute the material just in noncommercial usages, provided the original work is properly cited.
download pdf 1.76 MB Peer Review Comments ( 117.67 KB) Get Permission (article level) Import into EndNote Import into BibTex
Number of Comments: 0