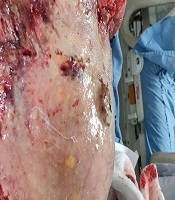 Necrotizing fasciitis is a severe infection involving skin, subcutaneous tissue and superficial fascia, which has lethal outcome. Risk factors associated with this condition include diabetes mellitus, anemia, and immunosuppressive states such as AIDS, or prolonged steroid use. Surgery is an independent risk factor. Serial surgical debridement with appropriate broad spectrum antibiotics is the mainstay of treatment. We are reporting two cases. First is necrotizing soft tissue infection of the anterior abdominal wall in post cesarean patient, which was very fulminant and fatal. The second is Fournier’s gangrene in a patient with episiotomy during normal vaginal delivery. Postpartum necrotizing soft tissue infection is very challenging and fatal. Nowadays these are very rare cases due to antibiotics.

Necrotizing fasciitis is a severe infection involving skin, subcutaneous tissue and superficial fascia, which has lethal outcome (1). It is a rare infection having incidence of 0.4 per 100000 and 34% mortality (2). Risk factors associated with this condition include diabetes mellitus, anemia, immunosuppressive states such as AIDS, prolonged steroid use. Surgery is an independent risk factor. Post-operative NSAID has been reported as a risk factor in some study (3, 4). Necrotizing fasciitis is usually polymicrobial, but methicillin resistant Staphylococcus aureus (MRSA) has been associated with up to one third of patients (5). Necrotizing fasciitis had been described by Hippocrates in the 5th century and its association with cesarean section was first reported by Gretz et al. in 1962 (6, 7). Goepfert et al. had given an incidence rate of 1.8 per thousand cesarean deliveries (8). Schorge et al. (9) reported five cases over a 15 year period.

A 31 year female presented with anterior abdominal wall necrotizing soft tissue infection with fever from the last three days (Figure 1). She had undergone cesarean section six days before. The patient had developed pus discharge from the surgical site on the third post-operative day, which had spread to the anterior abdominal wall in a short period. The patient had low grade fever continuously for two days. She had no comorbidity such as diabetes, hypertension, COPD etc. On local examination, the wound was filled with pus and sloughed materials. Necrotic patches were present on the wound, with ill-defined margins. Her blood investigation showed low hemoglobin (Hb = 9) and leukocytosis (WBC = 18000), serum creatinine, urea, bilirubin were normal. The patient was started on broad spectrum antibiotics like amoxicillin-clavulanic acid and clindamycin through intravenous route. After proper resuscitation, the patient was operated and surgical debridement was done (Figures 2 and 3). Culture and sensitivity of debrided deep tissue with pus was sent. On culture and sensitivity, MRSA (methicillin resistant Staphylococcus aureus) was the causative organism, which was sensitive to imipenem, colistin. According to sensitivity the antibiotic was re-administered. The patient had been observed continuously. Serial debridement and regular dressing was done. Patient infection could not be controlled. Patient condition deteriorated and ultimately the patient could not be saved and died due to septic shock. 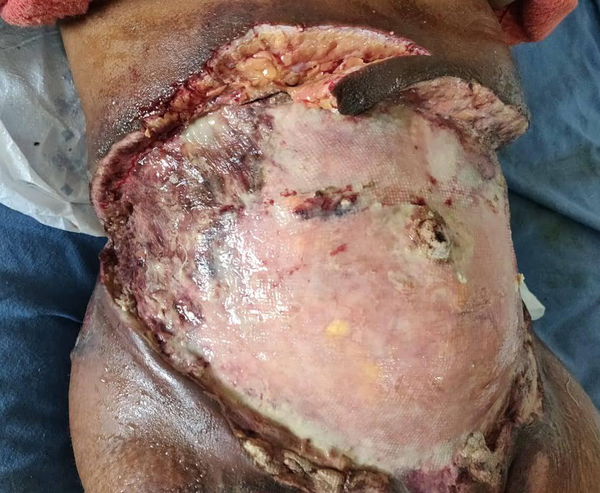 At the time of presentation 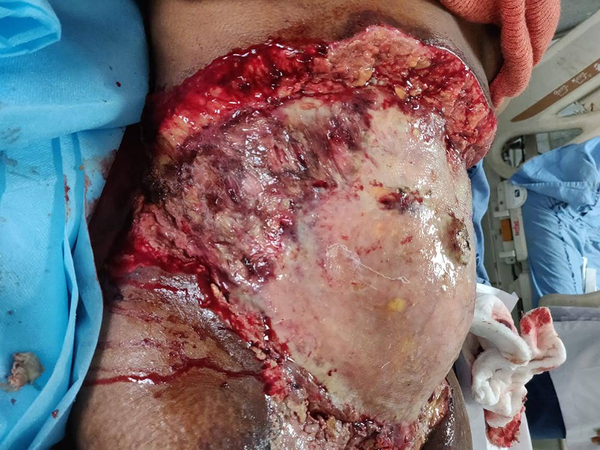 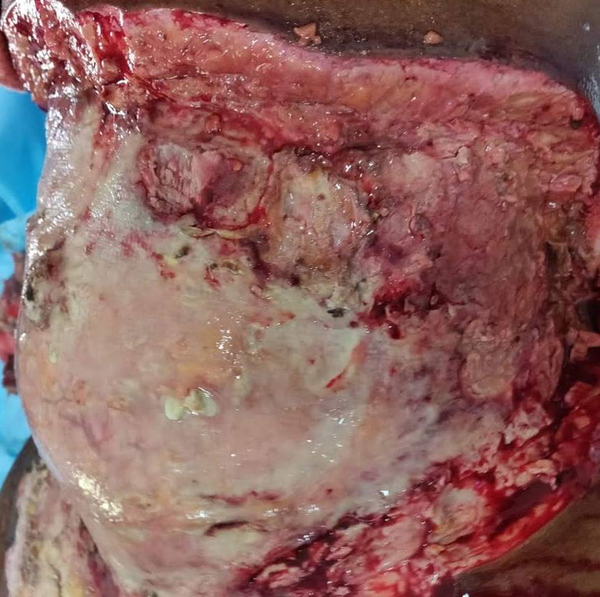 A 26 year old female had undergone normal vaginal delivery with episiotomy. She had developed episiotomy site infection on the fourth post-operative day. Initially, there was pus discharge from site then infection spreaded to vulvar area. It involved skin, subcutaneous tissue and superficial fascia. Gradually it spreaded to the whole perineum including the perianal area. Clinically it was necrotizing soft tissue infection of perineum also known as Fournier’s gangrene. The wound was filled with pus, sloughed tissue, and necrotic materials. The patient was surgically debrided in operation theater after pre-operative preparation. Culture and sensitivity of pus was sent. There was both aerobic and anaerobic infection like Streptococcus pyogens, bacteriodes, which was sensitive to clindamycin, linezolid, amikacin etc. Antibiotics such as linozolid and amikacin were started at optimum dose. Serial surgical debridement with regular dressing was done. Patient improved gradually and wound healed. Patient was discharged and followed-up.

Necrotizing fasciitis in post-partum patients is a very big challenge for both diagnosis and management as very few had clinical experience of this. High clinical suspicion and aggressive management are associated with good prognosis.

Copyright © 2020, International Journal of Infection. This is an open-access article distributed under the terms of the Creative Commons Attribution-NonCommercial 4.0 International License (http://creativecommons.org/licenses/by-nc/4.0/) which permits copy and redistribute the material just in noncommercial usages, provided the original work is properly cited.
download pdf 5.45 MB Peer Review Comments ( 86.22 KB) Get Permission (article level) Import into EndNote Import into BibTex
Number of Comments: 0