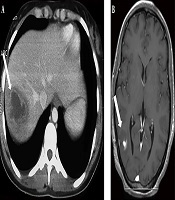 Lemierre’s syndrome is an uncommon, life-threatening disease that develops as a severe complication of oropharyngeal infection. However, this syndrome has also been reported during anaerobic septicemia, originating from diverse sources of infection, such as the gastrointestinal system. The diagnosis of this syndrome remains challenging, and is often prompted by the detection of Fusobacterium necrophorum in blood culture, rather than with clinical signs or symptoms.

A previously healthy 38-year-old woman was hospitalized for a 6-day history of fever, watery diarrhea, and vomiting. Physical examination of the patient showed fever, pharyngitis, and diffuse abdominal tenderness. Laboratory investigations revealed elevated inflammatory markers, and two blood cultures revealed Fusobacterium necrophorum. An abdominal ultrasound showed a liver abscess and hepatic vein thrombosis. The thoracoabdominal and cerebral computed tomography scan confirmed the results of the abdominal ultrasound. It additionally revealed bilateral lung nodules and a parietal brain abscess. The patient’s general condition and her laboratory test results, improved after receiving treatment with ceftriaxone and metronidazole. She received antibiotics for three months, without anticoagulation therapy. Repeated computed tomography scans showed a resolution of the liver, pulmonary, and brain abscesses, as well as the recanalization of the hepatic vein.

Lemierre’s syndrome emerges as a result of septic illness and liver abscesses in case of gastrointestinal symptoms despite the lack of common presentation.

Lemierre’s syndrome (LS) is an uncommon, life-threatening disease with an incidence rate of 0.6 to 2.3 cases per million people and a mortality rate of 4% - 22% (1). It is a septic thrombophlebitis of the internal jugular vein (IJV) paralleled with embolic abscesses, which develops as a severe complication of oropharyngeal infection (2). However, this syndrome has also been reported during anaerobic septicemia, originating from diverse sources of infection, such as the gastrointestinal system or the genitourinary tract (3). Fusobacterium necrophorum (F. necrophorum) is the most commonly involved bacterium, but other bacteria such as Fusobacteria, Streptococcus, Staphylococcus, and Enterococcus are also found in cultures (4). Risk factors for LS are not well-known. However, they appear to depend on the location of the initial infection. Gastrointestinal and genitourinary sources of infection appear to develop in elderly patients with a higher risk of an underlying malignant disease (3). Here, we reported a rare case of LS with hepatic vein thrombosis secondary to F. necrophorum septicemia complicated by liver, lung, and brain abscesses.

A previously healthy 38-year-old woman was hospitalized in our department for a 6-day history of fever, watery diarrhea, and vomiting. On admission, the patient had a fever of 40.5°C. Physical examination of the patient showed pharyngitis and diffuse abdominal tenderness. Laboratory investigations revealed a leukocytosis of 22400/mm3 with 88% of neutrophils, anemia with hemoglobin of 10 g/dL, and thrombocytopenia with a platelet count of 44000/mm3. Elevated inflammatory markers were noted, such as the elevated erythrocyte sedimentation rate (115 mm/h) and C-reactive protein levels (227 mg/L). Blood cultures were collected on admission. The use of empiric antibiotics started with ceftriaxone and metronidazole. The patient’s symptoms improved, but she was still febrile after 48 hours of receiving antibiotics. The blood cultures gave a positive signal from both anaerobic bottles within 72 hours. Gram stain showed pleomorphic Gram-negative rods, which were identified as F. necrophorum. Known for F. necrophorum association with LS, extensive workups aimed to determine the infectious source and eventually septic metastasis. The gynecological examination was normal. Moreover, both the chest x-ray and panorex of the mandible were normal and did not show focal abscesses. Similarly, the Doppler ultrasound of supra-aortic vessels was normal. An abdominal ultrasound showed a liver abscess (47 × 36 mm) and hepatic vein thrombosis. The thoracoabdominal and cerebral computed tomography scan confirmed a dome hepatic abscess (60 × 50 mm) (Figure 1) with hepatic vein thrombosis. It additionally revealed bilateral lung nodules from 6 to 18 mm (Figure 2) and a parietal brain abscess (10 mm) (Figure 1). Transthoracic echocardiography showed no vegetation or valvular damage. Stool examination and culture, along with colonoscopy, were normal. The bone scan showed no pathological fixation, and her tumor markers, including CEA and CA19-9, were negative. The patient’s general condition, as well as her laboratory test results, improved after she received the combined antibiotic (ceftriaxone and metronidazole) treatment. She became apyrexial within eight days. We continued intravenous drug use during hospitalization for 30 days. At discharge, she received antibiotics orally based on rifampicin and metronidazole. We did not prescribe anticoagulation therapy for the patient. Within three months of antibiotic therapy, thoracoabdominal and cerebral computed tomography scans showed a resolution of liver, lung, and brain abscesses as well as the recanalization of the hepatic vein. A three-year follow-up showed no evidence of recurrence or complications.

LS, previously known as ‘the forgotten disease’ for its rarity, is nowadays growing. Some studies have suggested that the reason for this increase is antibiotic resistance, changes in prescription patterns, or the increased efficiency of diagnostic technologies (5). Other studies have reported the link between the use of non-steroidal anti-inflammatory drugs and steroids and the enhanced bacterial virulence and spread (6). Previous studies have shown that LS occurs more frequently in children and young populations (7). In its typical presentation, LS is followed by an oropharyngeal infection, associated with the presence of suppurative thrombophlebitis of IJV with metastatic septic emboli, and is usually caused by Fusobacterium (8). However, many variants of the syndrome have been described. A review of the literature showed atypical LS cases who were not related to oropharyngeal infection but were related to intra-abdominal or lower limb infection (3). Different locations of the infection mostly caused by F. necrophorum were reported, including a prostatic abscess with iliac vein thrombosis and a pulmonary abscess, left ovarian vein thrombosis, and vertebral osteomyelitis (3). We presented a case of LS caused by F. necrophorum, which was complicated with supra-hepatic vein thrombosis as well as lung, liver, and brain abscesses. Since the hepatic portal circulation exclusively drains the gastrointestinal tract, the source of our patient’s infection was probably the lower gastrointestinal tract. In fact, F. necrophorum is known to be part of the commensal anaerobic floora in the caecum/vermiform appendix, colon, and rectum. In our case, imaging studies, tumor markers, and colonoscopy failed to identify any anatomic or functional abnormality of the gastrointestinal tract. Nevertheless, since the patient had a history of abdominal pain and diarrhea prior to admission and did not show other systemic illnesses, supra-hepatic vein thrombosis and the liver abscess were most probably due to a primary infection affecting the lower gastrointestinal tract.

The diagnosis of LS can be difficult, and is often prompted by the identification of F. necrophorum in blood cultures. It requires a high degree of clinical suspicion along with data indicating thrombophlebitis, sepsis, or septic emboli (5). Imaging finding help through the diagnostic process. The computed tomography scan is most useful for the diagnosis of abscesses since it shows edema of soft tissues, and even, vein thrombosis (9).

The desired treatment for Fusobacterium species in LS is aggressive antibiotics; a combination of intravenous penicillin and metronidazole is the most commonly used (6). The overall treatment duration is typically four to six weeks (3). The average time between the start of the treatment and the resolution of fever varies from eight to 12 days (9). The use of anticoagulation therapy is still controversial. However, most researchers believe that anticoagulation should be used in cases of thrombophilia (10) or extensive and severe thrombosis not responding to antibiotics (6). In our case, we observed a complete recanalization of the hepatic vein without anticoagulation therapy. Along with antibiotics, surgical or radiological abscess drainage may be recommended, depending on the size of the abscess (6).

The overall mortality rate of LS is difficult to estimate, but is high (up to 25%) and depends on the timing of antibiotic initiation (3). Accordingly, early diagnosis and appropriate treatment are crucial to reduce the mortality rate of this disease.

Copyright © 2020, International Journal of Infection. This is an open-access article distributed under the terms of the Creative Commons Attribution-NonCommercial 4.0 International License (http://creativecommons.org/licenses/by-nc/4.0/) which permits copy and redistribute the material just in noncommercial usages, provided the original work is properly cited.
download pdf 2.46 MB Peer Review Comments ( 113.80 KB) Get Permission (article level) Import into EndNote Import into BibTex
Number of Comments: 0