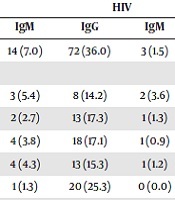 Toxoplasmosis is a serious infection, especially among the immune-compromised people such as HIV/AIDS patients.

This study assessed the seroprevalence and associated risk factors of toxoplasmosis among HIV patients and healthy volunteers or immuno-competent persons (IP) in Port Harcourt.

Toxoplasmosis is an important but neglected tropical parasitic infection with global distribution and significance (1-3). It is caused by the protozoa called Toxoplasma gondii (4). Cats and other feline species are the definitive host as these animals excrete the oocysts into the environment (5). Also, humans become infected by eating food or drinking water contaminated with oocysts released in cat feces (1, 6, 7). In humans with normal immune competence, Toxoplasma spp. infections tend to be asymptomatic in most cases. This is not the case in individuals who are immuno-compromised as acute infections or reactivation of a latent infection can be severe and life-threatening, causing severe encephalitis with fatal consequences (7-9).

Toxoplasmosis is gaining much prominence economically, medically, and epidemiologically (8, 9). Establishing the link between toxoplasmosis and immune competence is vital, considering the increasing number of immunocompromised patients, including HIV positive patients, cancer patients, and organ transplant recipients. The parasite can lead to life-threatening conditions for these individuals, being an opportunistic parasite. Hence, the need to generate baseline data that will assist health institutions to make policies on whether toxoplasmosis testing should be included in daily routine laboratory testing or not. Especially in Nigeria, where toxoplasma testing is not carried out in the health care centers as routine. Such data may also determine the most efficient method to adopt for detecting the parasite.

The main objective of this study was to investigate the seroprevalence and risk factors of Toxoplasma gondii among healthy volunteers and immunocompromised subjects drawn from - the HIV clinics of the University of Port Harcourt Teaching Hospital and the Braithwaite Memorial Specialist Hospital both in Port Harcourt, Rivers State, Nigeria.

Braithwaite Memorial Specialist Hospital (BMSH), also known as Rivers State University Teaching Hospital (RSUTH), is located on 5 - 8 Harley Street, old GRA, Port Harcourt, Rivers State, Nigeria. It is located within latitude 4°46’49” North and 7°0’50” East. It was established in 1925 as Braithwaite Memorial Hospital and originally served as a medical facility for senior civil servants. It later became a general hospital and gained the status as a “Specialist Health Institution”. It is now one of the biggest referral hospital owned by the State Government in Rivers State.

3.2. Collection of Samples and Serological Testing

Three millimeters of venous blood was collected from each of the 200 participants between February and June 2016. The blood samples were allowed to clot and then centrifuged for 5 minutes at (1500) rpm. The sera were collected and stored at 2°C. The developing plates cards, reagents, and specimen were all brought to a temperature of 24°C. These were processed using Bio Check for Toxoplasma Immunoglobulins IgG and IgM enzyme immunoassay test kit following standard methods. The number of CD4+ T-lymphocyte for each patient was measured and documented by the flow cytometry procedure.

A well-structured questionnaire capturing information regarding age, gender, occupation, possession of pets, and other risk factors were administered to respondents.

A two-way factor ANOVA and mean separation were used to analyze the data generated from this study.

Table 1. Seroprevalence Based on Socio-Demographic Factors Among the Study Populationa

Table 2. Seroprevalence of Toxoplasmosis Among HIV Subjects and Healthy Volunteers Based on Associated Risk Factors in Port Harcourt

The study showed that the HIV subjects recorded a higher seroprevalence with 36.0% compared to IP 21.5% for IgG ELISA tests. Also, HIV subjects recorded a seroprevalence of 1.5% compared to IP with 7.0% for ELISA IgM tests respectively. This result is similar to reports of the other studies of seroprevalence rate, 40.8% in Western Iran (9), 36.3% in Mazandaran, Iran (10), and 32.4% in Zaria, Nigeria (11). However, the seroprevalence of toxoplasmosis in HIV-positive subjects showed a little variation in some other studies, including 20%, 22.2%, and 27% which were reported in Eastern Nigeria, Abuja, Nigeria, and Sudan respectively (8, 11, 12). Seropositivity of 27% was reported for T. gondii among healthy immunocompetent people in Mali, Africa (13), while some studies reported a higher seroprevalence of 44.9%,49.1%,60.7%, and 80.8% (14-17). These discrepancies may be due to differences in their way of life, geographical area, weather conditions, and prevailing socio-demographic factors prompting the spread of the parasite in these localities.

This study showed fewer rates of IgM seroprevalence (3%) P > 0.05 than IgG. This observation supports the fact that IgM Toxoplasma antibody reaction to Toxoplasma infection is low; it is often repressed to untraceable levels in cases of severe immunosuppression (15). Similar observations of lower IgM seroprevalence compared to IgG seropositivity in HIV patients were also reported by other researchers from India (16, 17), Mexico (18), South Africa (19), Northern (11), and Western Iran (9). The low proportions of IgM antibodies in HIV positive subjects show that the testing for this antibody in the routine diagnosis of T. gondii infection in non-pregnant HIV infected individuals may be of restricted value (9). Also, the suppressed toxoplasmosis does not present any symptoms (8).

Nazari et al. (9), in a similar study, reported that seroprevalence was the highest in the 46 - 60 year age group, whereas Zhang et al. showed that the highest prevalence of the disease was in 3rd and 4th decades of life (20). Nevertheless, Walle et al. reported the highest prevalence rate in the 21 - 30-year age group (21). These deviations can probably be expounded by the long exposure time as the patient continues to age. Although there were no significant correlations between age groups and the seroprevalence of Toxoplasma spp., it was observed that the seroprevalence of Toxoplasma spp. infection increases with age ascribed to the waning immunity and gradual inception of aging (8, 13). The work-related prevalence showed that the traders with HIV had the highest seroprevalence of 30.0% and 0.9%, followed by the artisans with HIV 23.6% and 1.8% for IgG, and IgM Toxoplasma antibodies. Traders had the highest seroprevalence for IP 14.5% and 4.6%, followed by students 11.8% and 3.2% for IgG and IgM Toxoplasma antibodies, respectively. In this study, seropositivity was not significantly swayed by occupation and educational level. This is comparable to the previously-made observations in the related studies (8, 9, 11, 21).

HIV positive females recorded a higher seroprevalence (18.5%) than HIV positive males (17.0%) and IP females and males. However, the seroprevalence rates were close to those obtained in similar findings in Abuja (8), Malaysia (9), Western Iran (9), and Northern Mexico (17), showing that T. gondii seroprevalence was not sex-related.

There was no significant difference between the T. gondii seropositivity with the CD4+ lymphocyte count, which is consistent with the reports of studies from Northern Nigeria, Ethiopia, Malaysia, Mexico and Morocco (11, 15, 18, 21) However, according to a study in Jahrom, Iran, there was a correlation between the CD4+ count, 100 cells/μL and the Toxoplasma seropositivity (22). Although CD4+ T cells played a major role in fortification against intracellular protozoan parasites such as T. gondii as the cells produce important effector cells that help control the parasite recrudescence during HIV infection (23, 24).

History of keeping pets, engaging in gardening, and farming and eating improperly washed fruits and vegetables were factors that significantly influenced the spread of toxoplasmosis in this study. This is supported by the findings reported in other studies (8, 9, 25, 26). From the similar studies which border on risk factors which influence toxoplasmosis, it has also been observed that Poor personal hygiene which greatly contributes to toxoplasmosis, is not considered (27-29).

Toxoplasmosis is prevalent in HIV positive patients in Port Harcourt and evident as suppressed symptomatic infections in the healthy populace. We recommend a regular awareness campaign in the study area. We also recommend regular testing of all HIV infected individuals for IgG anti-toxoplasma antibodies for timely detection of patients who may be at risk of the infection.

Copyright © 2020, International Journal of Infection. This is an open-access article distributed under the terms of the Creative Commons Attribution-NonCommercial 4.0 International License (http://creativecommons.org/licenses/by-nc/4.0/) which permits copy and redistribute the material just in noncommercial usages, provided the original work is properly cited.
download pdf 117.69 KB Peer Review Comments ( 194.90 KB) Get Permission (article level) Import into EndNote Import into BibTex
Number of Comments: 0