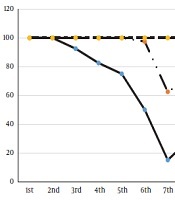 Assessment of an Insecticidal Paint for Malaria Control

Malaria, a life-threatening blood disease caused by the Plasmodium parasite, is transmitted by female Anopheles mosquitoes, which carry the infective sporozoite stage of the Plasmodium parasite in their salivary gland (1, 2). Despite intensive attempts to control malaria, it has remained a major public health problem, particularly in tropical countries. It places a major burden on the economy of households and the health sector, as well as on worldwide development (3, 4). About 219 million malaria cases were reported in 2017 worldwide, with an estimated death rate of 435,000 (5). Globally, about 306,000 children under five years died of malaria. Malaria also accounted for almost 3% of disability adjusted life years (DALYs) in 2013 (6, 7).

To combat the scourge of malaria, many approaches, such as prompt treatment, proper diagnosis, and vector control, have been put in place. In the area of vector control measures, environmental manipulation and managements were practiced. To prevent the development of larvae and their emergence to the adult stage, measures such as the introduction of molecular films and oil, insect growth regulators, predatory fish, and bacteria species (Bacillus spp) into water bodies were adopted in the past (8-10). However, their effectiveness was limited to permanent bodies of fresh water. Studies have not affirmed a reduction in the entomological inoculation rate (EIR) and new malaria cases (11, 12).

Anopheles funestus and Anopheles gambiae sensus stricto are the major Plasmodium vector species, which cause malaria disease. Most of these vector species are endophagy, biting at night, and enodphilic for the subsequent hours or days. Residual insecticide sprayed indoors on walls and ceilings (IRS) as well as the insecticide treated net (ITN) was used by the World Health Organization (WHO), in collaboration with the United Nations Children’s Emergency Fund (UNICEF), the United Nations Development Program (UNDP), and the World Bank, as the focus of Roll Back Malaria Global Partnership to coordinate efforts in fighting malaria (13).

Despite the widespread information about the distribution of ITNs/long lasting insecticidal nets (LLINs) for malaria control, many people do not sleep under ITNs/LLINs. Some people find sleeping under LLINs uncomfortable, while others habitually stay up late either to recreate, socialize, or study. For some, the nature of their work does not allow sleeping under the net or requires them to go to bed late. Moreover, there is still poor access to LLINs due to insufficient supply per household and low utilization by those who possess the nets (14-18). In developing novel malaria control methods, insecticidal paints have been introduced and are commercially available. However, it is necessary to assess the efficacy of insecticidal paints and monitor the duration of their effectiveness when used.

Thus, this study aimed to assess the efficacy of insecticidal paints against Anopheles mosquitoes transmitting the malaria parasite and also the duration of their effect.

The study was carried out in Ikeji, Arakeji (7.508ºN, 4.881ºE), a rural agrarian community in the Oriade local government area of Osun State. A majority of settlers in this community belong to the Yoruba ethnic group. It had a population of about 18,840 people during the National Census of 2006 (19). The two major roads into the town were the only roads laid with asphalt. Other roads were untarred and without drainages. There are pot holes and gullies in the area created by erosion.

Pyrethroid Spray Catch (PSC) was performed to determine the mosquito density in the eight experimental rooms between 6-8 am prior to paintings, as described by WHO (20).

Anopheles gambiae s.l. larvae were collected randomly from breeding sites using the dip method (20, 21). They were then transported and sorted into third and fourth instar larvae at the insectary section of the Biological Sciences Laboratory, the Joseph Ayo Babalola University, Ikeji, Arakeji. They were maintained at 28ºC and ~80 humidity with a 12 hr day/night cycle (22) and fed with 12.30 g of a mashed low-fat biscuit and 7.59g yeast capsules (23). The emerged mosquitoes were taken from the bowls with a mechanical aspirator and introduced into plastic cages covered with fine mesh for five days.

The larvae of the Kisumu strain of Anopheles mosquitoes was obtained from the Parasitology and Entomology Laboratory of the Nigerian Institute of Medical Research, Yaba Lagos. The larvae were maintained in the laboratory of Joseph Ayo Babalola University.

The five-day-old, non-blood fed female adult Anopheles mosquitoes were used for cone bioassay.[24] Polyvinyl chloride cones (PVCs) were fixed on the walls of the experimental rooms, with one PVC cone on each wall side of each of the rooms (Figure 1). Twenty mosquitoes were released into each of the cones using a mechanical aspirator and allowed to stand there for 30 minutes. The number of knocked-down mosquitoes were recorded at time intervals of 10, 15, 20, and 30 minutes (24). After 30 minutes, the mosquitoes were transferred into 150 ml holding cups (10 individuals per cup) covered with a net. A cotton wool pad soaked with 10% sugar solution was placed in each cup so that any surviving mosquito could access sugar (24). The process was also performed for the Kisumu strain. The number of deaths in each cone was recorded 24 hours after the mortality rate was determined from the pool of dead mosquitoes (24, 25). That is, 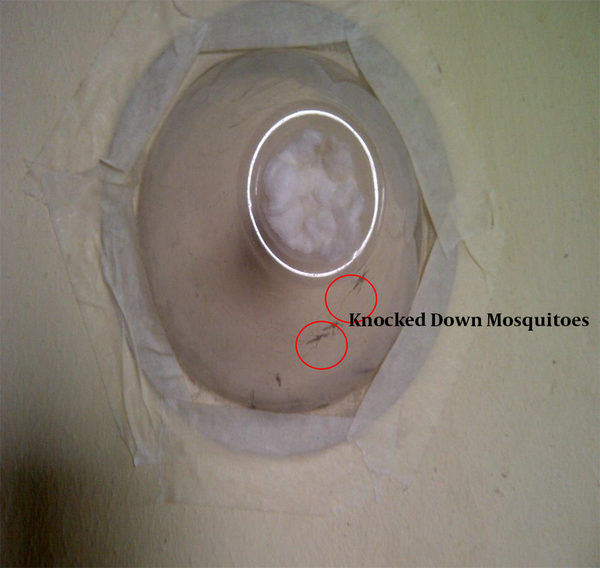 A total of 11,520 mosquitoes were used for the longitudinal study. The study was conducted monthly for 12 months.

The data were analyzed with Microsoft Excel 2013. The chi-square test was used to determine the difference in the susceptibility of the mosquito strains. Levels of statistical significance were measured at the 95% confidence interval (CI). The observations were taken to be statistically significant at P value < 0.05. 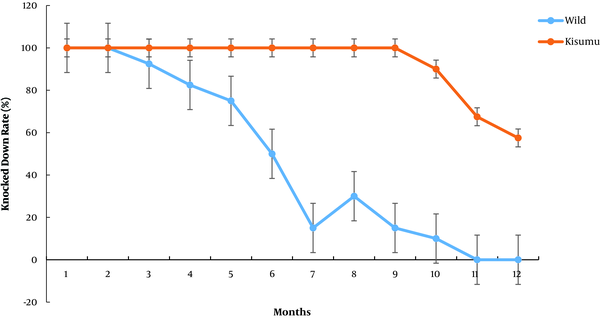 The organophosphate-based insecticidal paint was found to be effective, and total knock-down was observed for mosquitoes exposed to it. The total knock-down of mosquitoes (the wild and Kisumu strains) exposed to the insecticidal paint was observed within 10 minutes of exposure until the second month post painting. However, mosquitoes exposed to walls painted with the paint without insecticide were not knocked down. The short knock-down duration indicates the susceptibility of mosquitoes in the study environment to organophosphate insecticide. However, Awolola (26) reported the resistance of mosquitoes in Osun State to other the WHO approved classes of insecticide. The ability of a paint to release insecticide to effectively knock down mosquitos in a short time is a desirable outcome for controlling the malaria vector.

Painting walls with such paints will break the transmission of malaria parasites by the mosquito vector.

Copyright © 2020, International Journal of Infection. This is an open-access article distributed under the terms of the Creative Commons Attribution-NonCommercial 4.0 International License (http://creativecommons.org/licenses/by-nc/4.0/) which permits copy and redistribute the material just in noncommercial usages, provided the original work is properly cited.
2021-09-28 11:51:08
Thank you all for valuable information published.