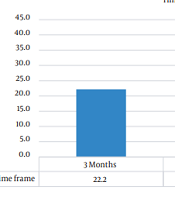 Prevalence of Hepatitis B and C Infection in Tehsil Fort Abbas, Pakistan

The prevalence of hepatitis B in the world differs from low (< 2%) to high (> 8%) in different areas. According to the CDC, more than 320 million people suffer from hepatitis. Viral Hepatitis causes more than one million deaths annually. It is a fatal disease alarming for Pakistan as well. Twelve million people suffer from hepatitis B and C, consisting of approximately 5% of the population in 2019.

This study aimed to study the prevalence of HBV and HCV, and the trends of treatment in positive cases.

This is a cross-sectional, descriptive study carried out at THQ Fort Abbas of Punjab, Pakistan, for six months. Camps were arranged, and samples were drawn from general population by pricking them on the finger, and hepatitis B and C screening were performed via Immunochromatographic test (ICT) rapid device method. Those found positive on ICT devices were interviewed.

Prevalence recorded was lower than the last available data of Bahawalnagar fist but still more than Pakistan. Males were found more infected with hepatitis because of their social circle.

Hepatitis is an ancient disease. It is one of the most fatal and threatening diseases. Hepatitis viruses are the major cause of hepatitis transmission. There are six types of hepatitis viruses discovered till now, i.e., A, B, C, D, E, and G. Hepatitis B and C viruses are more fatal and have higher mortality rates that cause acute and chronic inflammations. The prevalence of hepatitis B in Pakistan ranges from 2.3% to 2.5%. In contrast, HCV is more prevalent in general population, which is between 2.6% to 5.3% (1). And in the world, 2.2% of people have hepatitis C inflammatory disease, while Pakistan is the 2nd position in the list of countries with the most prevalence of HCV (2).

From 1994, the Ministry of National Health, Regulation, and Services worked with World Health Organization (WHO) to add the hepatitis B vaccine to the extended immunization program (EPI) of Pakistan for immunity against HBV in children and to eliminate the hepatitis virus from the country. This recommendation was drafted in 1992 by WHO to integrate the vaccine in the EPI program successfully by 1997 (3, 4). During the early stage, in chronic inflammation of HBV and HCV, the patient may or may not have the symptoms. Most symptoms appear when the liver damage increases adversely. While in case of acute inflammation, the patient will show symptoms at the start. These include yellowing of eyes, i.e., jaundice sign, changes in urine and stool color, anorexia, pain in the abdomen, weight loss, and flu (5, 6).

The frequency of anti-HCV in Karachi, South Punjab, and Central Punjab ranged from 2.2% to 3.3%, while the same in north Punjab was 5.3% (7-9). A study was conducted by Pakistan Medical and Research Council (PMRC) in which the prevalence of HBsAg and HCV was found to be 2.5% and 4.8%, respectively. Overall the prevalence was recorded at approximately 7.3%. Twelve million people from Pakistan were infected with hepatitis, according to that research (10).

This study aimed to study the prevalence of hepatitis B and C in general population and the trends of treatment among positive cases.

It was a cross-sectional descriptive study. This study was conducted in the hepatitis control program of the Punjab Government supported by WHO at Tehsil Head Quarter Hospital Fort ABBAS. The study was completed in six months. A total of 3,058 patients were examined. The technique used in sampling was the random sampling technique. Immunochromatographic test (ICT) rapid testing technique was used. The patients’ samples were placed on a sample pad where “S” pointed to samples. Then buffer was added and allowed to incubate at room temperature for half-hour.

The patient was asked to wait for half-hour. In case of the presence of viral antibodies, a line parallel to control could be seen on test pad on a place named ‘T’ that pointed to Test. Patients having hepatitis B or C virus were interviewed. ICT principle is based on the antigen-antibody complex. Analyte antibodies attach to antibodies and complex form a line on pad. Patients were asked all questions present in the questionnaire, and verbal consent was taken for research. Data collected from the questionnaire and test results were analyzed using SPSS.

Table 1. The Prevalence of Disease a

Trends of the treatment differences were very interesting as the literacy rate in that area is relatively low, so people prefer to go to different quacks and pharmaceutical stores for treatment and keep looking for a shortcut, as shown in Figure 1. Trends of the treatment as recorded in patients having hepatitis are given above. There were some other demographics studied of hepatitis-positive patients stated as follows in Table 2.

Trends of treatment in the general population diagnosed with hepatitis.

Age group studies showed that people aged 30 - 35 years plus were mostly infected with hepatitis. Moreover, 33% of people who had disease belonged to urban areas and the rest of 67% were from different villages and rural areas. In addition, 15% of the patients had an independent business, 18% person were job holders, 20% were former, and 4.5% were drivers. Daily wager was low in number as only 2.5%, while the highest prevalence group-wise was seen in housewives as recorded 37%. Only 22% of people got their treatment started within three months, while 38% said they knew they had hepatitis almost six months ago and 38.6 had hepatitis for 1 year and did not get the treatment initiated. Also, 57% of people who were diagnosed with hepatitis did not even get their family screened, and the rest of 43% of the patients who got their family screened, almost half of them, had someone in their family with hepatitis, as described in Figure 2.

During the research study, the prevalence recorded of HBV and HCV Collectively was 5.75, which is more than earlier reported in Pakistan’s general population (10). Factor affecting this issue was earlier reported for a number of populations, but these statistics always vary from area to area. In addition, since Fort Abbas is an underdeveloped area and literacy rate is low, the prevalence recorded in the general population was higher, but this is less than the prevalence of hepatitis reported for hepatitis in Bahawalnagar district earlier (11) The prevalence was higher in males compared to females. Moreover, 51% of the patients were male, and 46% were female, and the rest of 2% were transgender. The hepatitis rate was higher in male patients, which might be due to more social circle that they have.

Other demographics were also studied from data collected by patients with hepatitis infection, in which findings indicated that hepatitis infection was the least in the age group 10 - 20 years and was the highest in the age group 30 - 35 years and 35 years plus. This may be due to immunity difference and interaction with the outer environment as age increases, risk of getting infected increases as well. A similar trend was also seen in other studies that people with age of 30 years plus had higher prevalence of hepatitis (11). Regarding the residence, population of the rural area was more affected by hepatitis as 67% of patients belonged to rural areas, and the rest were from urban areas. During the study, the occupation of patients was also studied to find out whether there is some factor affecting the prevalence of hepatitis. The results recorded indicated that agriculture-related people were more prevalent. The reason might be that most population is related to agriculture directly or indirectly. Housewives consisted of a population with high prevalence of hepatitis C and B viruses, but the reference population was mostly females that was why its results were higher.

Trends of treatment were also studied in this study as literacy rate in this area is lower, and average income and social status are not much prevailed. Due to this reason, people believe in superstitious things, believe in quacks, and go there for treatment and look for shortcuts. Approximately 20% of the population of positive patients went to other ways of treatment rather than the control program and a doctor. Attitude toward the treatment of hepatitis was not much serious in patients because of chronic and asymptomatic nature of hepatitis B. Mortality rate due to hepatocellular carcinoma admitted with chronic liver diseases and hepatitis is very high in Pakistan (12).

Furthermore, 22% of people started their treatment within three months as soon as they received their PCR results, but 38% and 38.5% of the population took almost six months and one year, respectively, to get their treatment started.

After diagnosis of Hepatitis in patient, they were asked if they had screened their families after their confirmation, 57% of patients answered a NO, while 43% answered yes. Out of those 43%, 17 Percent had someone infected in their family, which shows infection in family as risk factor of Hepatitis.

This was probably because of the risk factor that might cause transmission of hepatitis from one person to others with sharing households (13).

Hepatitis prevalence is decreased compared to earlier reported for Bahawalnagar district but still, it is more than the average prevalence of Pakistan. Hepatitis C was more prevalent than the hepatitis B virus. Awareness of risk factors and factors causing transmission of the virus should be told to the general population, and there is a need for countrywide camps to screen and treat people forcefully, even those who are not willing and who take this chronic disease lightly. Arrangements should be made to take care of groups of the population at high risk and have more prevalence. Free treatment of hepatitis should be made accessible to everyone along with free PCR testing, and people should be asked to get their family screened who was found to be infected with hepatitis.

We are thankful to all doctors and supervisors, and seniors who supported us in this research project.

Copyright © 2022, International Journal of Infection. This is an open-access article distributed under the terms of the Creative Commons Attribution-NonCommercial 4.0 International License (http://creativecommons.org/licenses/by-nc/4.0/) which permits copy and redistribute the material just in noncommercial usages, provided the original work is properly cited.
download pdf 108.08 KB Get Permission (article level) Import into EndNote Import into BibTex
Number of Comments: 0