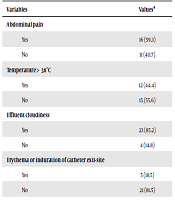 The medical records of children diagnosed with PD-related peritonitis hospitalized at Mofid and Ali-Asghar Children’s Hospitals from January 2018 to December 2019 were retrospectively reviewed. Cases of relapsing peritonitis and fungal peritonitis were excluded. Data on demographics, clinical manifestations, para-clinical evaluations, peritoneal fluid culture and antibiogram, and antibiotic regimen were analyzed.

A total of 23 CAPD children aged 1 - 17 years were hospitalized with a confirmed diagnosis of PD-related peritonitis, accounting for a total of 27 peritonitis cases. The most frequent manifestation of peritonitis was cloudy dialysate (85.2%), followed by abdominal pain (59.3%). Gram-negative organisms were isolated in 48.1% of cases, and 4 cases had negative cultures. The frequency of antibiotic prescription within 14 days of admission was significantly higher in culture-negative cases (P = 0.002), and abdominal pain was more prevalent in Gram-negative peritonitis (P = 0.004). All Gram-negative organisms were sensitive to ceftazidime and imipenem; while 61.6% of them were sensitive to gentamycin. All Gram-positive organisms were sensitive to cefazolin, and vancomycin was effective against all Staphylococcus strains. Oxacillin resistance was reported in 50% of Staphylococcus strains.

PD-related peritonitis should be suspected even in cases with clear dialysis effluent who present with other manifestations of peritonitis such as fever or abdominal pain. Moreover, intraperitoneal administration of a first-generation cephalosporin (cefazolin) combined with ceftazidime was an appropriate therapeutic option for empiric therapy.

Peritoneal dialysis (PD) has emerged as a major treatment strategy in patients with end-stage renal disease (ESRD) (1). Pediatric PD has several advantages over hemodialysis, including being home-based, cost-effectiveness, compatibility with lifestyle, improved quality of life, and easier application in infants (2-4). Therefore, it is considering the best dialysis modality in pediatrics, especially for infants and young children living in developing countries (5). Although due to recent advancements in catheter placement techniques, the outcomes of PD children have significantly improved, peritonitis still is the most significant complication in this population, leading to hospitalization, procedure failure, transfer to other forms of renal replacement therapy, and even death (6, 7). PD-related infection is an important patient-centered outcome in the multi-stakeholder SONG (Standardized Outcomes in Nephrology) PD initiative (8).

According to the international society for peritoneal dialysis (ISPD) guideline, empirical antibiotic treatment should be started as soon as PD-related peritonitis is suspected (9). A multicenter study in Australia has shown that contact-to-treatment time (the period between patient's admission and initiation of antibiotic therapy) was independently associated with an increased risk of PD failure (10).

Traditionally, Staphylococcus species have been known as the main etiological agent of PD-related peritonitis; however, the prevalence of gram-negative bacteria is on the rise in many countries (11-13). Accordingly, the latest ISPD guideline has recommended that empirical treatment of PD-related peritonitis should be center-specific, i.e., based on bacteriologic dominance and antimicrobial susceptibility of each center (9).

This study has evaluated the causative agents of PD-related peritonitis recovered from peritoneal fluid of children admitted to the Nephrology wards of Mofid and Ali-Asghar Children’s Hospital, Tehran, Iran, over a 2-year period. Patients aged 18 years or younger with a definitive diagnosis of PD-related peritonitis by the attending pediatric infectious diseases specialist who were hospitalized from January 2018 to December 2019 were studies. Peritonitis was diagnosed based on the presence of at least two of the following criteria: cloudy peritoneal effluent, abdominal pain, a dialysate white-cell count higher than 100/μL with at least 50% polymorphonuclear cells, or positive culture of peritoneal effluent (7). Cases of relapsing peritonitis (i.e. peritonitis with the same causative agent occurring < 30 days following a previous case of peritonitis) and fungal peritonitis were excluded. The study was approved by the Ethics Committee of the Faculty of Medicine of Iran University of Medical Sciences (approval code: IR.SBMU.REC.1396.20).

The medical records of children diagnosed with PD-related peritonitis and hospitalized at the aforementioned hospitals during the study period were retrospectively reviewed. Data regarding patients' demographic characteristics, underlying renal disease (type and duration), peritoneal dialysis (duration, frequency, and catheter type), past medical history of dialysis-associated peritonitis (times and duration of hospitalization), and antibiotics used before the current hospitalization were collected. Detailed data on the current case of peritonitis (including clinical manifestations, para-clinical evaluations, results of peritoneal fluid culture and antibiogram, and antibiotic regimen) were also recorded.

Data were analyzed with SPSS version 21.0 (SPSS Inc., Chicago, IL, USA). Descriptive data were reported using mean and standard deviation or medians (interquartile ranges (IQRs)) for continuous and frequencies (percentages) for categorical variables. Patients with positive cultures and those with culture-negative peritonitis were compared using the Chi-square/Fisher’s exact test for categorical variables, and the Wilcoxon rank-sum test was used for continuous variables. A P-value of < 0.05 was considered statistically significant.

CAPD was the dialysis modality in all cases, and Tenckhoff catheter was used for dialysis in all patients. In 50% of patients, the current case of PD-related peritonitis occurred within 18 months after starting PD. In 40.7% of cases, there was at least one previous case of PD-related peritonitis. In seven (25.9%) of the peritonitis cases, the patient had a history of receiving antibiotic therapy within 14 days before hospitalization, with cephalosporins reported as the most commonly prescribed antibiotics. Patients' baseline characteristics are described in Table 1.

The most common clinical manifestation of peritonitis was cloudy dialysate, followed by abdominal pain. In 12 (44.4%) cases, the patient was afebrile at presentation. Erythema or induration of catheter exit-site was reported in five cases, three of which showed purulent discharge. The results of clinical and laboratory findings are summarized in Table 2. Blood and urine cultures revealed negative results in all cases. Cultures from peritoneal fluid samples were performed by BacT/alert or BACTEC blood system. In four (1.4%) cases, the culture of dialysate fluids culture was negative. Microbiological evaluation of purulent discharge at the catheter exit site revealed infection with Staphylococcus species (two Staphylococcus Aureus and one Staphylococcus Epidermidis).

There was a slight predominance of Gram-negative organisms (13 cases, 48.1%), including six Pseudomona Aeroginosa, one Enterococcus, one Citrobacter, and five Escherichia Coli. Gram-positive organisms (10 cases, 37.1%) comprised two S.aureus, six S.epidermis, one Streptococcus pneumonea, and one Streptococcus Viridans. In four peritonitis cases (14.8%), there was no documented positive culture of dialysate fluids for either bacteria or fungi.

All patients were treated according to the ISPD guidelines. All patients received empiric antibiotic therapy which mainly consisted of intraperitoneal administration of a first-generation cephalosporin (cefazolin) combined with ceftazidime or, less commonly, a combination of ceftazidime and vancomycin. Post-empiric antibiotic selection was made based on antibiogram results.

In this two-center, retrospective study, the causative agents and susceptibility patterns of 27 cases of PD-related peritonitis were evaluated. The findings revealed the slight predominance of Gram-negative over Gram-positive bacteria (48.1% vs. 37.1%), with Pseudomona Aeroginosa and S.epidermis as the most common Gram-negative and Gram-positive organisms, respectively.

Most cases of PD-related peritonitis are caused by bacteria, and fungal peritonitis comprises < 5% of all cases (4). Gram-positive bacteria, particularly coagulase-negative staphylococcal species, have been pronounced as the main causative organisms of PD-related peritonitis by most series (14). On the other hand, advances in the catheter insertion technique and exit site care and antibiotic prophylaxis for S.aureus nasal carriage have led to a decreasing incidence of Gram-positive peritonitis and, therefore, a relative increase in Gram-negative peritonitis (11-13).

The results of the present were different from some studies performed in Iran or other countries, which reported Staphylococcus (coagulase-negative and S. aureus) as the most prevalent causative organism in PD-related peritonitis (11-13, 15). The observed difference can be attributed to factors such as study population, catheter insertion and exit site care protocols, and prophylactic antibiotic regimens. In our series, Gram-positive organisms accounted for almost 37% of cases, while Staphylococcus spp. accounting for 80% of the Gram-positive isolates. Moreover, CoNS accounted for 75% of Staphylococcus spp. as a cause of peritonitis. Conversely, Warady et al. reported a similar prevalence of S. aureus and CoNS (7).

It has been shown that the likelihood of Gram-negative peritonitis is positively associated with the disease's severity; however, the older the patient, the lower would be this possibility (7). We found no significant association between Gram-negative causative agents and baseline, clinical, and paraclinical characteristics, except for abdominal pain at presentation. The authors recommended studies with larger sample sizes to determine risk factors associated with causative organisms.

In the present study, culture-negative peritonitis accounted for 14.8% of cases. Based on the literature, the frequency of culture-negative peritonitis varies greatly among centers and different age groups; from 13.4% in Australian adult PD patients to 31% in Warady et al.'s report which investigated pediatric PD patients from 14 countries (7, 17). Culture-negative peritonitis poses a serious diagnostic problem and might be explained by the consumption of antibiotics before microbiologic evaluation. We found a statistically significant association between antibiotic prescription within 14 days of admission and culture-negative peritonitis (P = 0.002). Moreover, the implementation of standard protocols for the acquisition of samples and isolation techniques are mandatory. According to the ISPD guideline, intraperitoneal cefepime monotherapy can be used for the empiric treatment of PD-related peritonitis. When cefepime is not available, intraperitoneal first-generation cephalosporin combined with ceftazidime or an aminoglycoside is recommended (9). The findings showed that 38.5% of Gram-negative organisms were resistant to gentamycin.

It can be argued that the intraperitoneal administration of a first-generation cephalosporin (cefazolin) combined with ceftazidime is a good regimen for empiric therapy. We also found that vancomycin was effective against all Staphylococcus strains. However, it is recommended to choose a first-generation cephalosporin over a glycopeptide in order to avoid antimicrobial resistance (17).

The present study was limited by the relatively small number of CAPD-related cases. This might be because, compared to hemodialysis, fewer children are treated by PD at our centers, a fact that is reported by other studies conducted in Iran (18-20). Accordingly, multi-center studies on the bacteriologic profile of PD-related peritonitis in children are recommended. To the best of our knowledge, this is the first study to describe the frequency of bacterial agents causing CAPD-related peritonitis, the most important complication of PD, and we also investigated their antimicrobial susceptibility in ESRD children. The results showed that Gram-negative bacteria are the primary causative agent of CAPD-related peritonitis, which is not consistent with the results of other studies. This signifies the importance of reviewing retrospective data on bacteriologic dominance and antimicrobial susceptibility in each center to determine the empiric antimicrobial regimen for CAPD-related peritonitis.

Copyright © 2020, International Journal of Infection. This is an open-access article distributed under the terms of the Creative Commons Attribution-NonCommercial 4.0 International License (http://creativecommons.org/licenses/by-nc/4.0/) which permits copy and redistribute the material just in noncommercial usages, provided the original work is properly cited.
download pdf 121.07 KB Peer Review Comments ( 175.84 KB) Get Permission (article level) Import into EndNote Import into BibTex
Number of Comments: 0